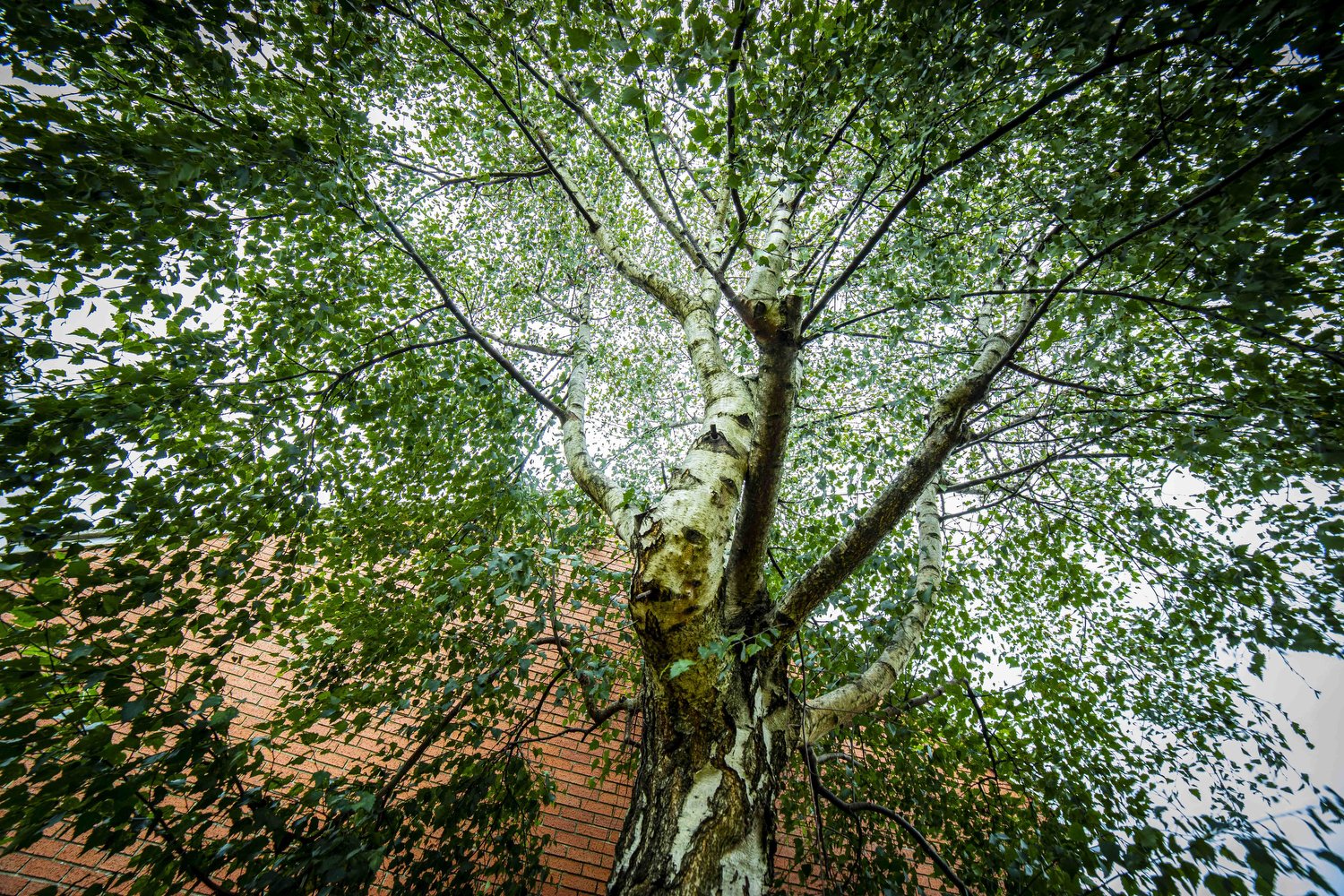 Trees matter but we often take them for granted. They matter to us individually, collectively and as a planet. They pop up in cities as designed features of the street. They appear in our leafy suburbs and gardens, and in traditional habitats of woodlands and forests.

Humans ponder trees almost as much as water, ponds, lakes, rivers, oceans. They help our mental health. We have a dim admiration of them, even if we don’t know much about them. You don’t have to know anything about them to enjoy them.

At a young age we learn how they are important to the world, how they are possessed of bio-magical oxygenating powers. Photosynthesis and all that. They touch our lives on large and small scales, whether or not we readily appreciate them, remark upon their aesthetic, size and age, whether we feel their textured bark, hug their trunks, climb their branches, swing from them, get annoyed by their endless mushy November leaves, or whether we pass by them, relatively oblivious.

Having grown up in a small village surrounded by forest, I feel an attraction to trees and a calm around them. But I am also annoyingly ignorant about them. My tree identification skills are terrible. Still, it feels humbling to walk beneath the tall wise trees known since childhood, ancient lofty pines peered at from my parents’ home for decades, those who have seen so much and care nothing for any stupid human virus.

But trees are a victim of their ubiquity, their easiness, their forgettability. The horrifyingly rapid deforestation in Brazil reportedly has the potential to alter the global climate forever. Humans take liberties with trees on various scales.

We had a fairly large silver birch tree removed from our back garden recently and it made us sad. This is the reason for a sprawling blog post about trees.

Why our tree mattered

Having a tree in your garden is a nice thing but also a grown-up responsibility if it becomes tall and looming.

It was trimmed a couple of years ago. A man came and essentially gave it a haircut. The new shape looked a little ragged but we weren’t experts. Maybe he did a good job. Maybe not. Hiring people to do things at your property always feels like a punt.

Back in April we first became aware of the infestation. An initially small number of green aphids steadily grew until, in June and July, they were everywhere. Dripping from the tree onto the shed, onto laundry on the washing line, onto the clothes on our backs. 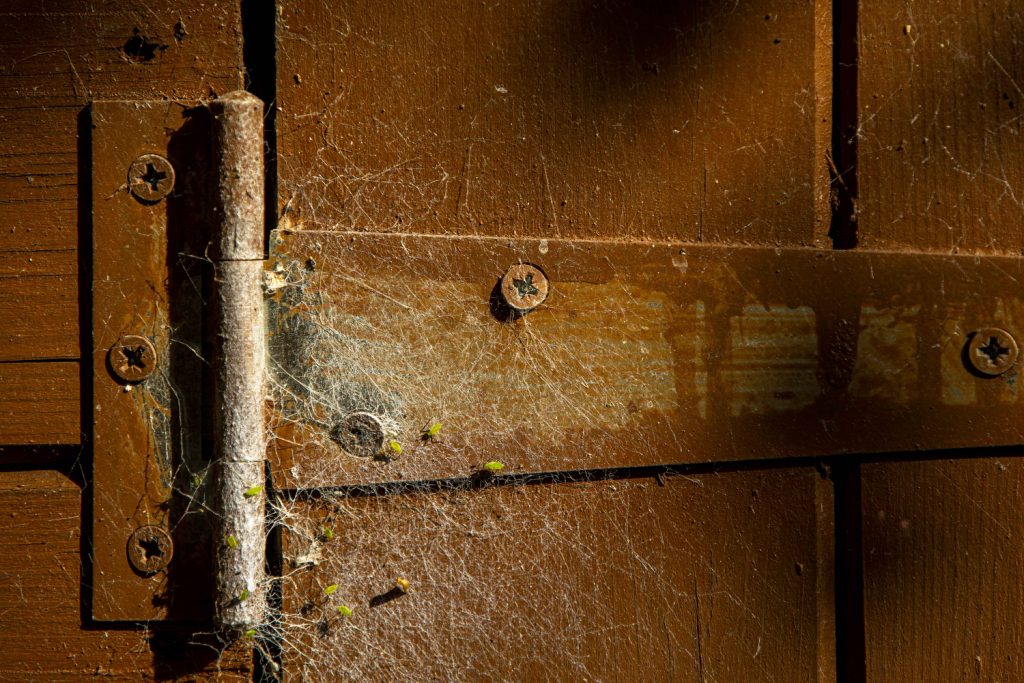 Sap sticky leaves prematurely began drifting down to the grass from around May. Our tree was not well. It was suffocated by its position, planted right up against concrete blocks with little breathing space for its roots.

Groups of leaves in some areas turned a dull sickly green. 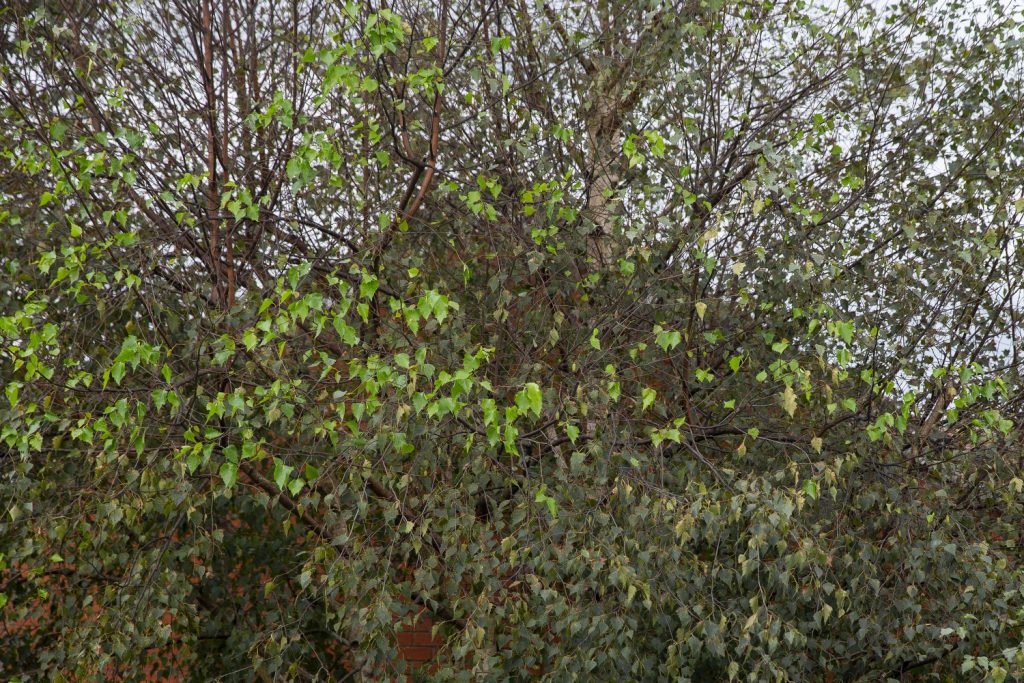 We discovered that ladybird larvae can help control bugs and pests in trees, and considered buying some before eventually they arrived in droves. By that point it was too late to make any difference.

The infestation would surely return year on year and we couldn’t tolerate another one like the one we’d had, those tiny greenfly everywhere.

We wanted to use the garden, hang laundry out to dry. We decided to have it taken down.

Storm Francis and the chop

There was a definite sadness not unlike having a pet euthanised, but nowhere near that bad. The tree was part of our memories and short family history at the property. It had become a familiar homely backdrop to domestic life. Watching the branches bud, the leaves grow, green and dense, then yellow, brown, shrivel and fall. Hearing the wind rustle the leaves offered a pleasing natural sound when all around the noise is mostly human-generated. To remove it felt cruel.

(“Removed” is the nicest way to say it. Or perhaps “dismantled”. Most of the obvious words are horrible and make you feel worse. Chopped down, cut up, disintegrated. Witnessing it happen reflected those words. Brutal, barbaric, a massacre.)

Storm Francis was here when it was first due to be pulled down in late August, so the tree surgeon delayed by 24 hours. Too windy. We wondered if it would do damage in its final day standing.

It made me think about how massive vulgar deforestation might impact the climate to create more powerful storms and more extreme weather, uprooting more trees and causing greater damage.

The next day I went out looking for storm damage to photograph and found large trees felled in the Pontcanna area of Cardiff. Plasturton Gardens had suffered and roads were blocked. All around the city were errant strewn branches and various trees toppled. One restaurant in the Roath area of the city, recently taken over, rebranded and reopened following the coronavirus lockdown, had part of its roof caved in by a tree. 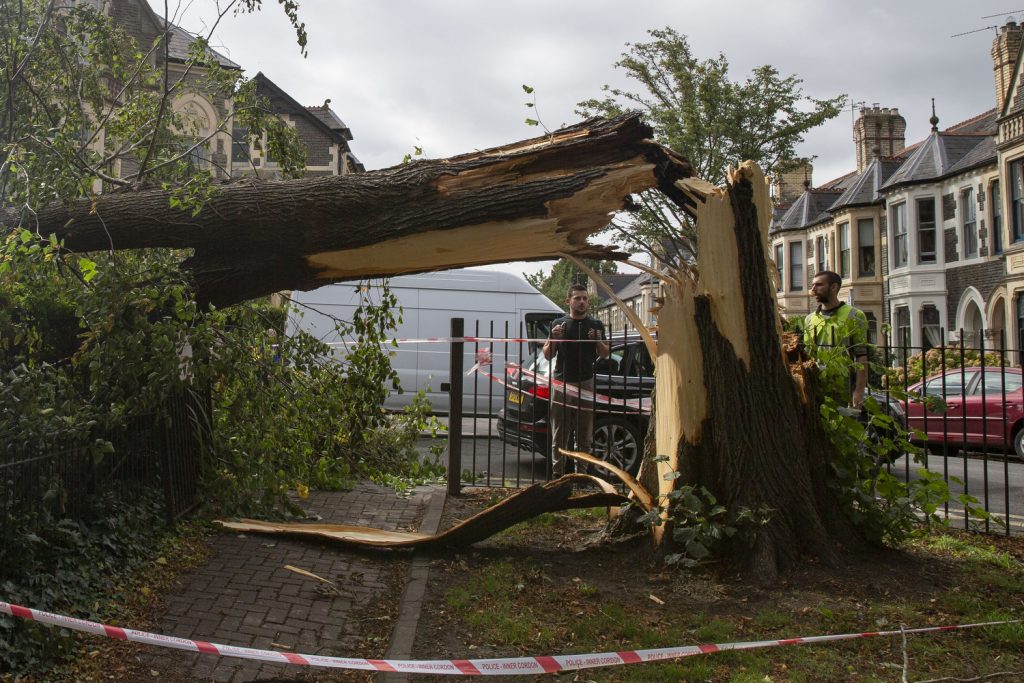 CARDIFF, WALES, UNITED KINGDOM – AUGUST 26, 2020 – Men assess a fallen tree in the Cardiff neighbourhood of Pontcanna after strong winds from Storm Francis caused damage across much of Wales and the UK. 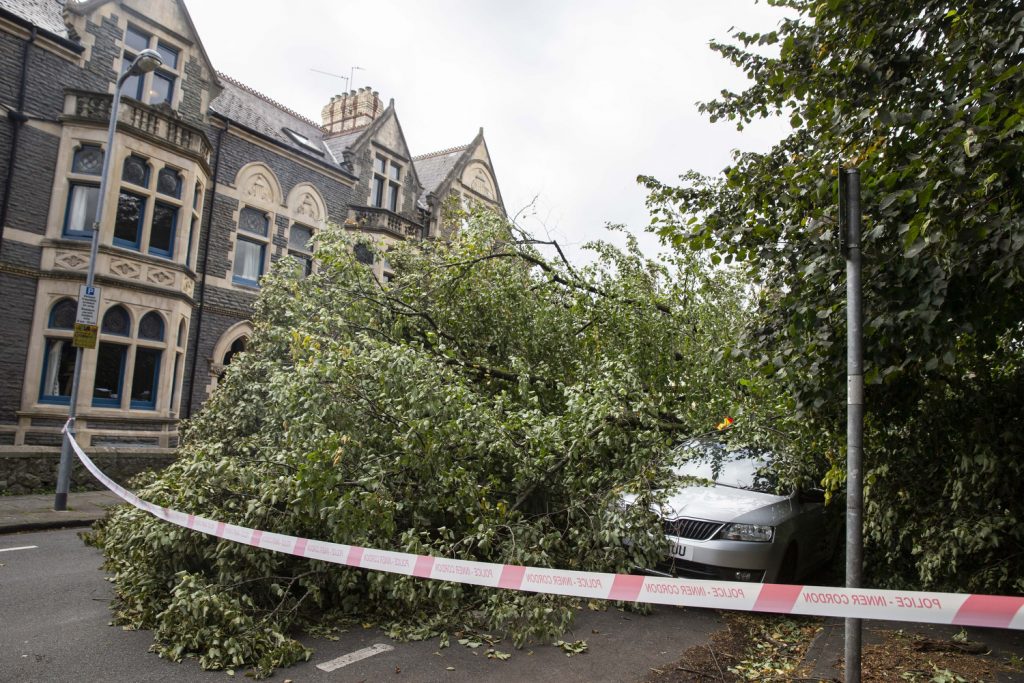 CARDIFF, WALES, UNITED KINGDOM – AUGUST 26, 2020 – A tree lies across a car and road in the Cardiff neighbourhood of Pontcanna after strong winds from Storm Francis caused damage across much of Wales and the UK. 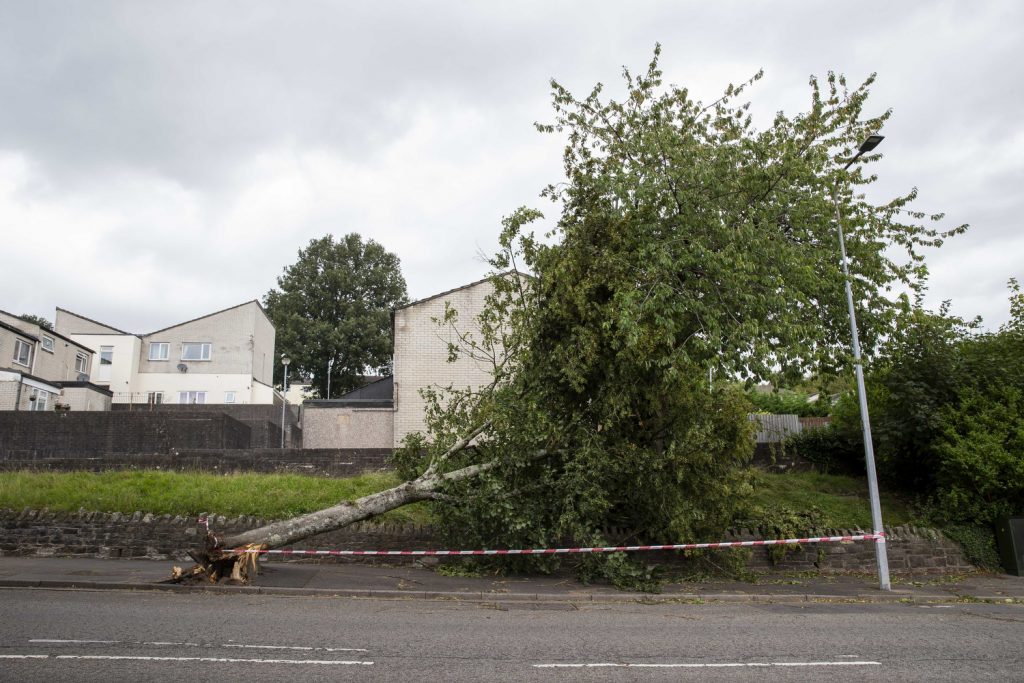 A fallen tree in the Fairwater area of Cardiff after Storm Francis caused damage across much of Wales and the UK. 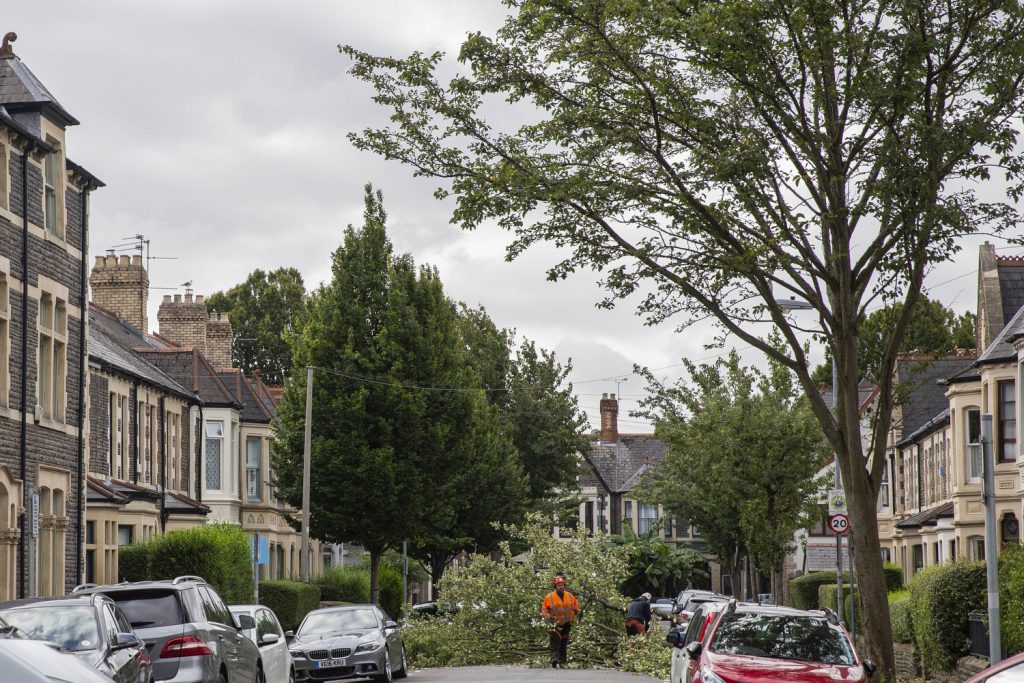 CARDIFF, WALES, UNITED KINGDOM – AUGUST 26, 2020 – A man clears trees from a road in the Cardiff neighbourhood of Pontcanna after strong winds from Storm Francis caused damage across much of Wales and the UK. 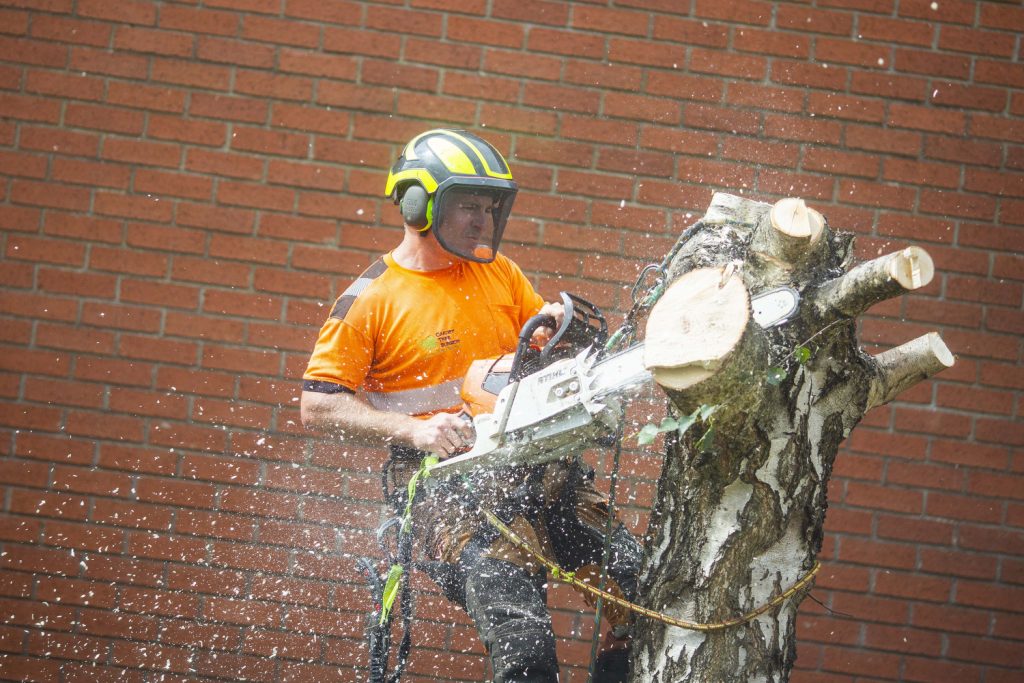 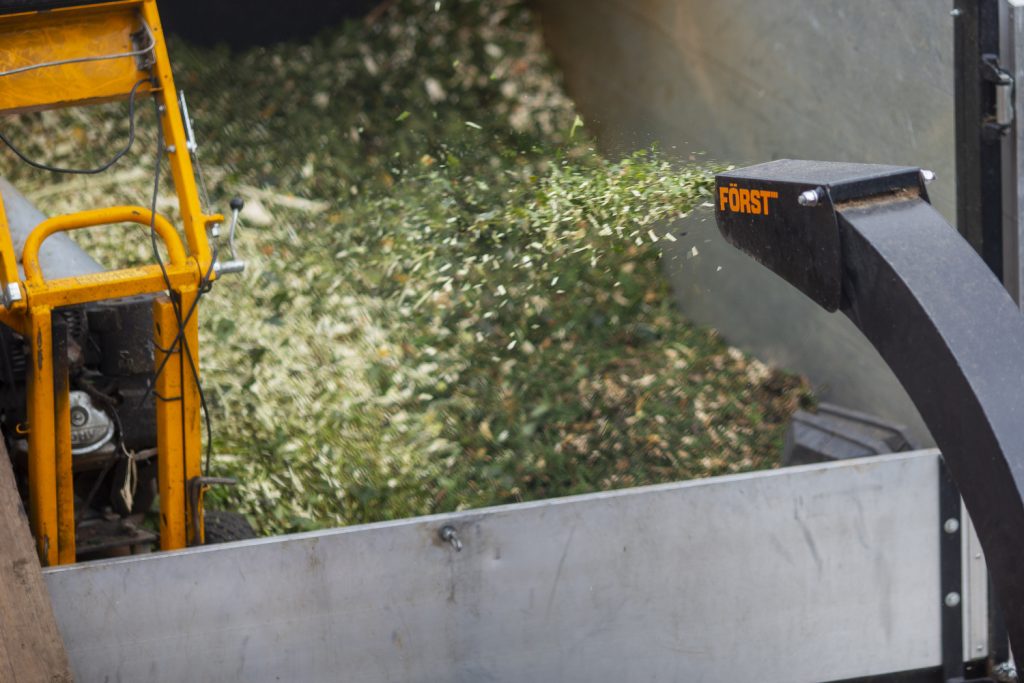 The increased sunlight was immediately noticeable. No more dappled, gently swaying shadows through the windows. Just direct, bald, unrefined sunlight. The back garden looked shaven, unfamiliar, somehow crass. Its absence was gaping and the newly exposed brick wall of the neighbouring house almost threatening. I briefly considered getting a projector and using the wall as an outdoor cinema screen.

We hope to get a smaller tree to plant in its place or nearby. Rest in tiny pieces, silver birch.