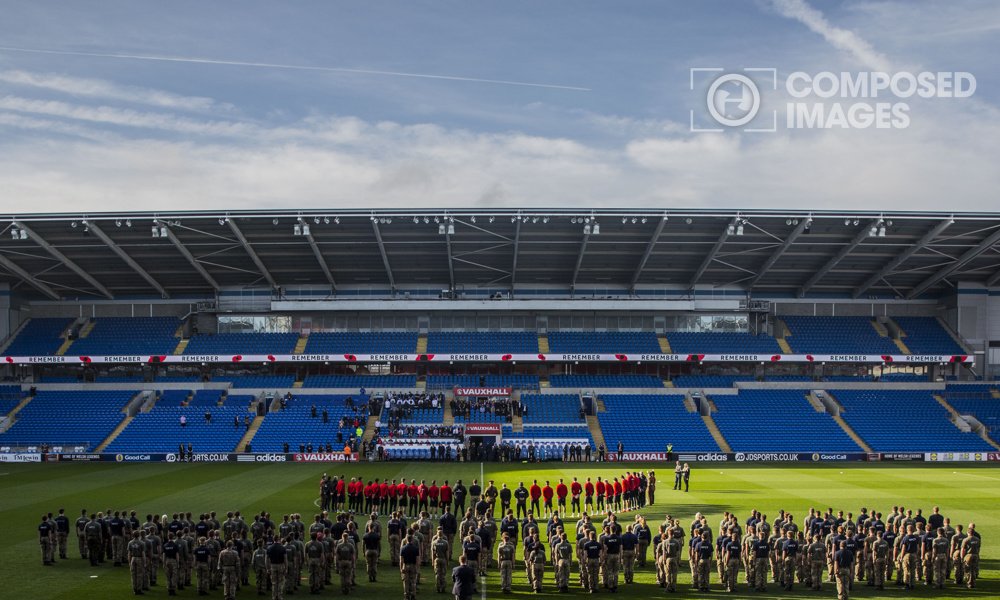 The remembrance period in Wales and across the UK is an instantly recognisable period of the calendar.

It’s an annual cultural moment. Looking back at photographs or moving pictures, you can quickly date the period to within a couple of weeks of the year if you see a poppy. Across the United Kingdom the poppy symbolises remembrance of those in the armed forces who lost their lives in battle since 1916.

Thousands of poppies are sold each November. They now come in many different forms including the traditional paper, plastic and pin-badges. Funds made from poppies go to the Royal British Legion, which shares it amongst war veterans in need.  Creative poppy displays are exhibited in public places.

Great respect is paid to remembrance in Wales. This year I found myself photographing and observing silences at a number of different venues.

For the 11am silence on November 11th itself I was at Cardiff City Stadium photographing a Wales national football team training session, ahead of the World Cup Qualification match against Serbia. Students of the Military Training Preparation College were marched into the ground, helping players and staff to observe the silence.

Logistical organisation of the silence at football matches can be a challenge. There can be marching military uniforms, war veterans and various flag-bearers. All of them must neatly slot into the regular pre-match rituals ahead of a designated kick off time.  It’s usual for a horn to be played before and after a silence, and sometimes for a referee to finish and end the silence with a blast on his whistle.  At Newport County the following day, it appeared to me as if something had gone awry in communicating to fans. 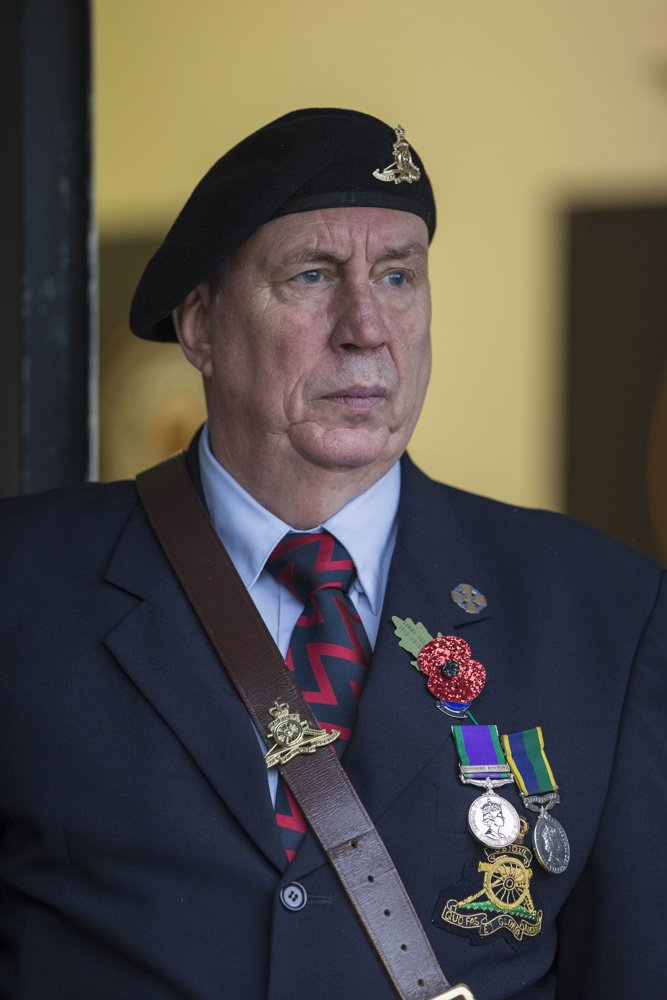 There was an appropriately sombre quieting of the crowd as the horn played, after which the referee blew to mark the start of the silence. But rather than falling silent the crowd understood it to be the end of the formality and roared into life for the match. I caught a frame of the officials appearing to consult each other, before deciding to press on with the match. 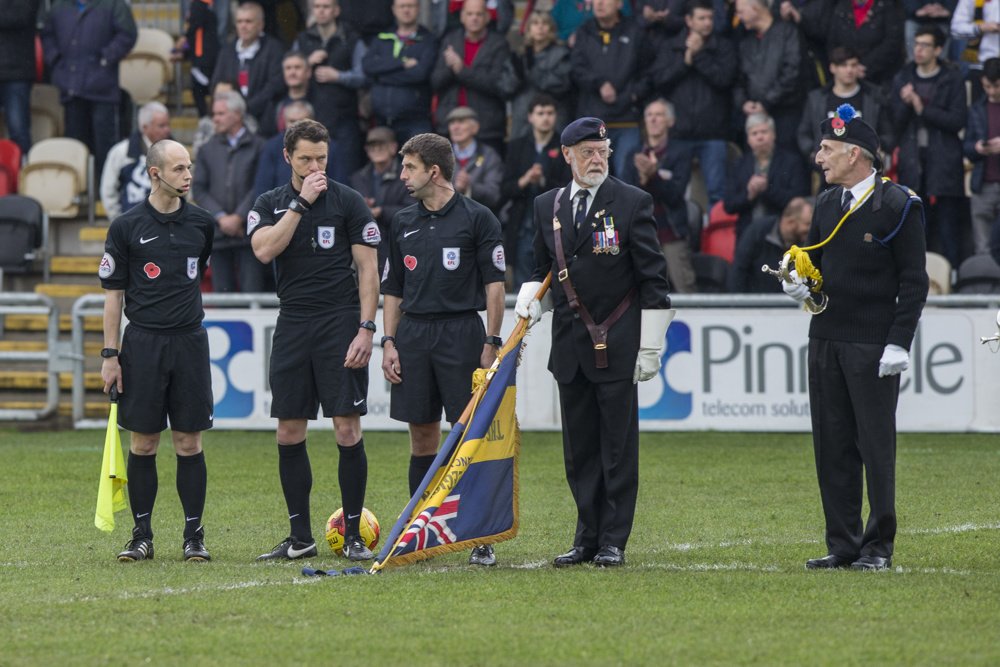 Officials consult each other as there appears to be confusion about the minute’s silence ahead of the Sky Bet League 2 match between Newport County and Carlisle United, November 12th 2016. Image © Mark Hawkins / Prime Media Images Ltd.

Back in Cardiff a few hours later for Wales v Serbia, fans at a packed Cardiff City Stadium paid respects by forming a giant image of a poppy. 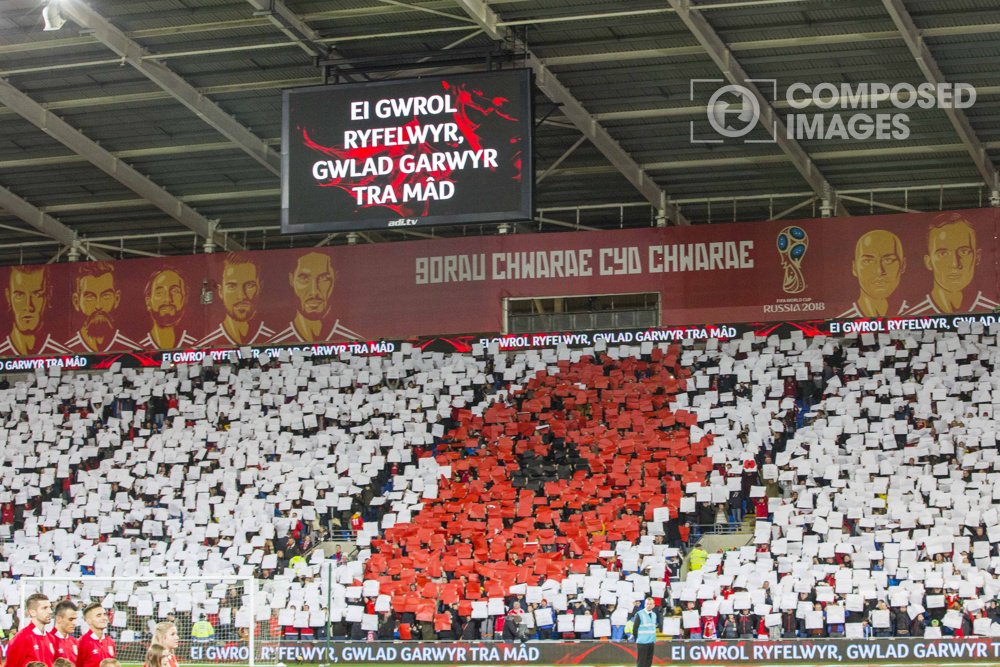 Fans raise cards to form the shape of a memorial poppy ahead of the FIFA World Cup 2018 qualification match between Wales and Serbia at Cardiff City Stadium, November 12th 2016.

Whether poppies could be embroidered into the armbands of players was the subject of much debate in the week leading up to the football internationals. World football governing body FIFA had ruled that the poppy was political and should not be displayed.  There had been much discussion and consternation expressed from people as senior as UK Prime Minister Theresa May. Unlike England and Scotland, Wales had conceded to the ruling, not wanting to risk any potential points penalty. They wore the simple black armbands instead. 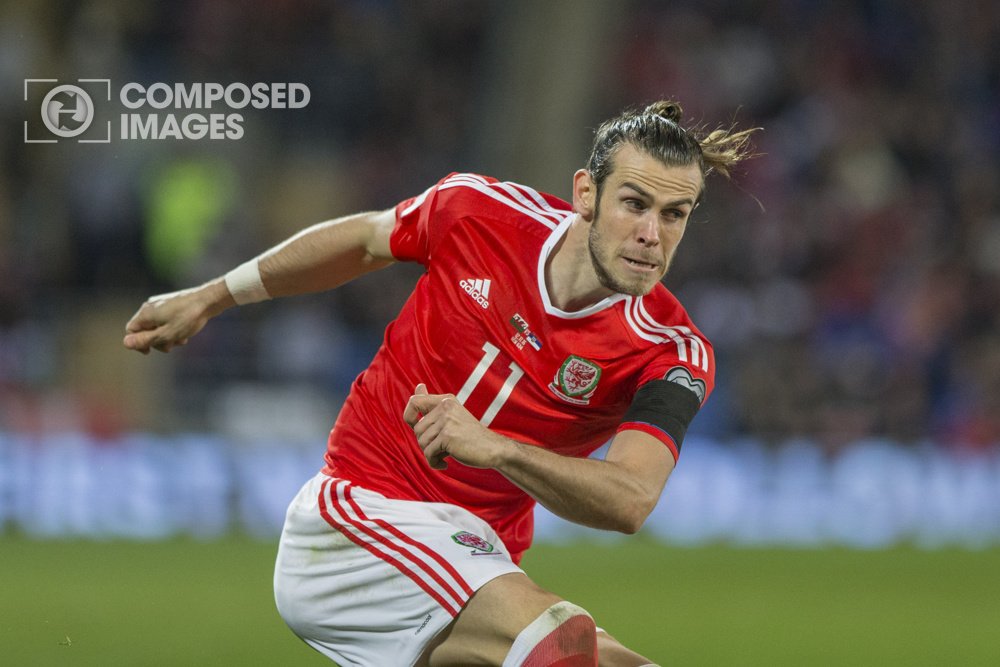 Across a city like Cardiff, and many towns and cities across the UK, there are multiple remembrance gatherings. Having captured several services in the city centre, this year for Remembrance Sunday itself I ventured a short distance down the road to my new local church in St Fagans village.

St Mary’s Church in St Fagans is picturebook pretty. As well as wanting to pay my respects for the last time, I thought a gathering at the front of the church next to its war memorial would make a nice photograph or two. Opting for an extra wide angle lens I was able to include the church, congregation, and final leaves dangling from the tree above. A warm autumn morning light played off the background trees. 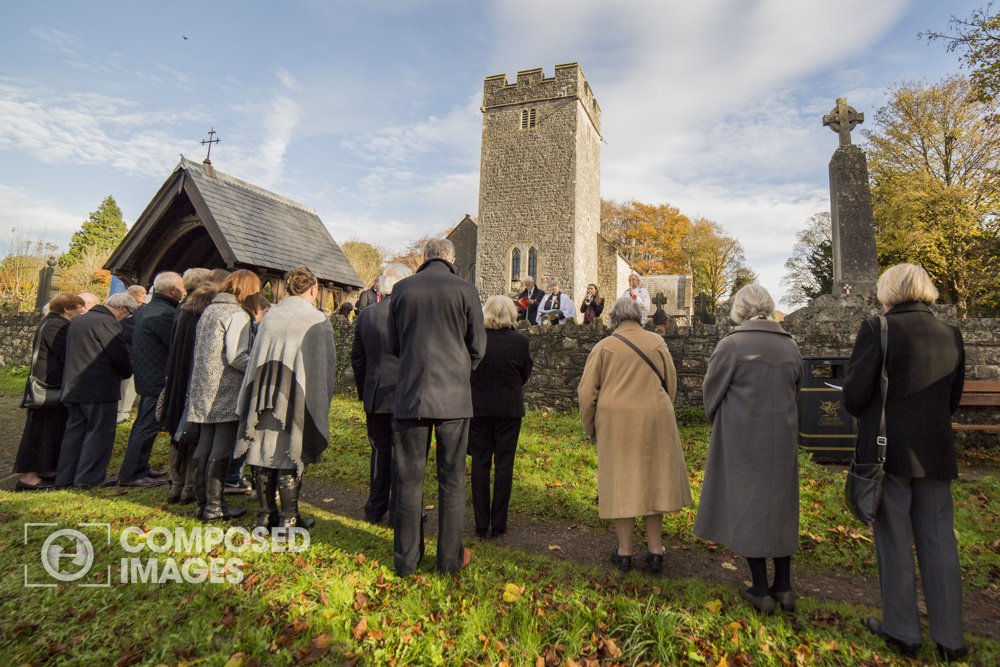 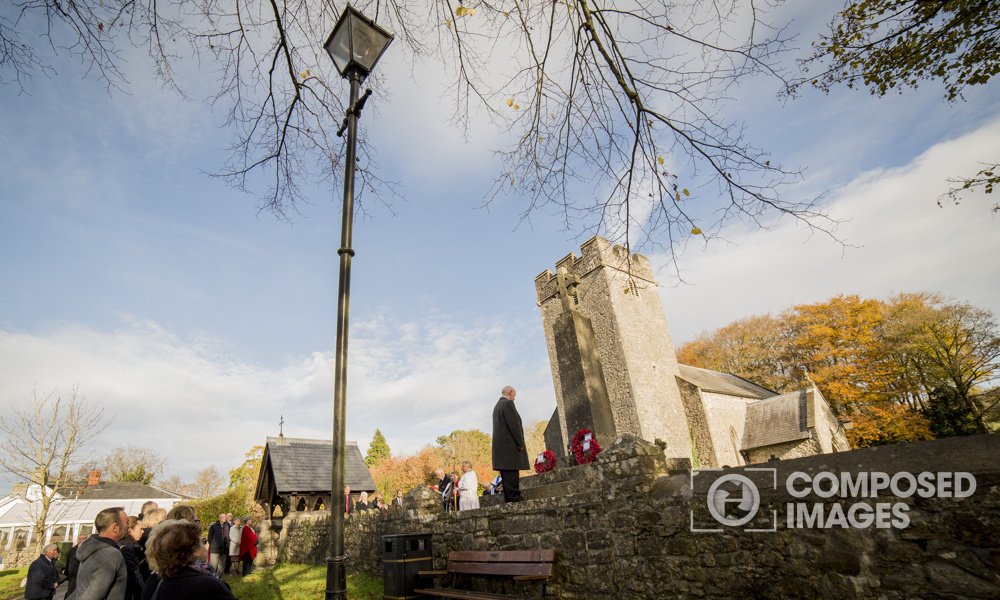 A man lays a wreath during a Remembrance Sunday service outside St Mary’s Church in St Fagans, Cardiff, November 13th 2016.

Remembrance formalities this year were played out with the strange and difficult backdrop of global politics. The controversial figure of Donald Trump has just been elected President in the United States. Many fear that this will usher in greater global uncertainty, and possibly lead to conflict. In 2016, as every year, we came together to remember those who have served and paid the ultimate price. But in the back of many minds may have been a chilly sense of foreboding about what the future has in store.