View to a kill 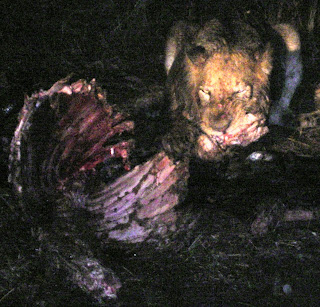 Another travel post from a 2009 trip to South Africa. This one from the safari section.

Sabie Sands is a private conservancy with no physical borders to its sanitised and vast neighbour, Kruger Park. It has the bonus of being out of the obvious tourist rat-run, or so we’re told, and walking amongst wild animals is possible, if not recommended. The absence of a curfew means safari rides can be taken at any time of the day or night.

Leaving just before dusk, we head for a nearby open area of bush near a watering hole which attracts a handful of rhinos. Pictures are taken, human nibbles nibbled and single alcoholic beverages drunk. The mood is light and party-like, although always carefully guarded by our leaders: Gerrie – who drives and commentates knowledgeably; and the leader of the other party of tourists, who sits in the spotter’s seat, fixed above the front bars of the vehicle.

Ten minutes after leaving our open watering hole party spot, the radio bleeps again and conversation ensues with another van. The male South African in front leans back to address our row and tells us the other van has come across a Wildebeest kill and Lions. This sort of find is rare, we’re assured.

I’m still unsure what this means or what to expect all the way up until our vehicle rolls to a halt, idiotically close to the scene: a pride of eight ravenously feeding young Lions tucking into a recently slain wildebeest. A charged buzz of excitement passes through the whole vehicle. This is what we came for.

There are no words to accurately represent what you feel upon seeing first-hand something so primal for the first time. It’s like gatecrashing a party improbably full of celebrities.

There’s ripping and tearing and gnawing of bones and skin and slippery organs; there’s gurning and growling and small rivalry for the best bits. It bears some resemblance to how my brother and I used to squabble for the first pick at a family Sunday roast. All this in glorious up-close technicolour, illuminated by the spotlight, made to feel touchable by viewing through binoculars.

The animal is reduced and disintegrated bit by bit.

We return for a reasonable dinner before setting out again, returning to our unanimously hated Land Rover after the heavens open to thunder. Now we have the closest possible experience of lions demolishing a carcass. At various points we are practically on top of them, snapping away. Gerrie reiterates that we are perceived simply as a big unknowable metal case, not as individual humans; more meals. Provided we don’t encroach on their feast, all will be fine.

As difficult as it is not to tense up when a staggeringly large creature moves within a couple of feet and makes eye contact, Gerrie is thankfully right. As he always is about everything. Nonetheless, our collective breaths are held when he decides to open his door and take several particularly daring shots from ground level, beneath the lower lip of his driver’s door.

These shots, courtesy of him, Gerrie Camacho.

(I just googled his name to check the spelling and found an article from September last year, together with an image of him grinning from a hospital bed: “Conservationist attacked by recovering Leopard”.  He’s that sort of guy.)

The lions take rotating shifts gnawing at the carcass, some napping afterwards, exhausted by the effort of their task. One head even bobs on a greasy wet ribcage while still in the process of eating: sated, bloody-mouthed, not quite able to suppress the fatigue. Some head off a few paces for a lie down before returning for seconds, thirds, fourths.

An earlier post about releasing a Leopard back into the wild.