This is an abridged travel blog of a trip taken in 2005 published over several weekly posts, covering Vietnam, Cambodia and Thailand.  Click to enlarge any images.  Further explanation in a previous post.

Any likes and shares much appreciated.

3. South West and into Cambodia

Once driven away from Saigon’s demanding clutches there come a high volume of ‘other-worldly’ images, the type of which I never imagined seeing unframed by a television screen.  From the comfort of our people carrier we saw grinning children standing outside painfully basic shacks, slums, precariously ramshackle riverhouses built out of corrugated iron and wood.  Beaming, they waved at our flashy mobile cage of privileged white westerners.  Upon second glance you noticed these alert children were in the minority.  Most, even young people only a little older, went about their day-to-day lives, not caring for this regular bypass of a modern western vehicle. 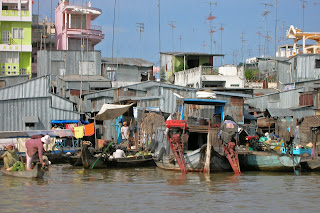 Our day’s travel across south Vietnam was broken up by a short boat crossing over a typically thick brown river.  We had to alight from our vehicle, allowing it to roll aboard almost empty, and walk aboard ourselves on foot.  Stopping short of the barrier, we were besieged by begging locals, to whom we affected blindness.  Most horrific was an old paraplegic man on a makeshift skateboard, moaning and rocking, appealing with a stubbed limb in our direction.  The briefest of glances was all I could stomach before returning my gaze to my sandals.  None of us offered anything to the waif-like beggars as we strode past, towards the river and our vessel.

The captain of the boat proudly showed us his cockpit of controls, but more proudly showed an unnaturally morphed bulge in his upper arm, where a bullet was still embedded from the war.  It took fifteen minutes to cross the river, before we were greeted by a similar scene to the one we had left on the other side.  Stomachs turning in pity once again, we walked away, pretending to ignore them, almost obscenely safe in our privilege.  Our guide knew some of the children from passing through so often.  Their faces peeled in delight when they spotted her, and she briefly stopped to chat and play. 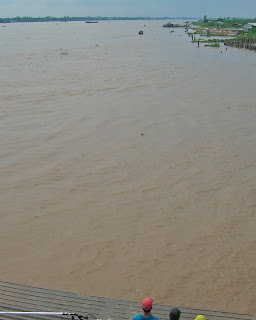 Teenage schoolgirls here wear incredibly elegant white satin, skin-tight, body length dresses which locals say “show nothing yet reveal everything.”  They carry themselves with a flawless dignity which is alien to British eyes more used to seeing schoolgirls in the mould of Little Britain’s Vicky Pollard or Catherine Tate’s Lauren.  These girls look like delicate porcelain ornaments as they ride their bicycles with perfect posture, balance and control.

We strolled through the manic, loud street market the next morning before breakfast.  It was a chaotic, vicious mess of quick moving images and raw fleshy smells.  By the time we needed to leap over wide puddles of blood, it was decided we’d seen enough. 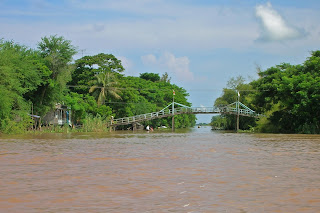 A long but exhilaratingly speedy riverboat ride into Cambodia was broken up at several remote points.  First a luggage checkpoint at a small riverside village where our bags had to be heaved off the boat and taken to a small building where an x-ray machine and its guard proudly lived.  Local children waited on a small jetty, offering to exchange any remaining Vietnamese currency.  I took advantage, neither knowing nor caring if I was getting good value.  They also pestered, unabashed, attempting to sell snacks and drinks as we sat under much-needed cover, waiting for baggage clearance to proceed. 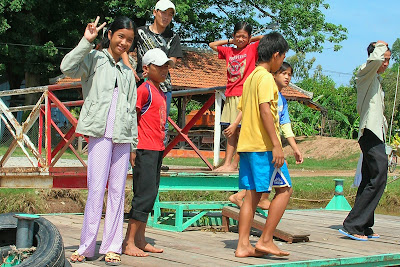 Ten minutes more down the river took us to the immigration cabins of the next village.  Military uniformed Cambodians sat behind desks in open rooms overlooked by portraits of their hugely respected royalty – who stylistically resembled the British monarchy, as if ours were ideal templates.  We each individually sat down with our completed forms across the desk from an official, their stamps at the ready, conscientious eyes flicking from our passport images to the real things.  It was like being scrutinised by a headmaster.  There were several moments of drama when it was discovered that one of our party did not have sufficient space in his passport, but this was somehow ultimately resolved.

Restricted by heavy baggage and sweating profusely, we eventually staggered from boat to the usual blitz of appeals: tuk-tuks, hotels, tours, plain begging.  We had arrived into the sweltering Cambodian capital of Phnom Penh.

The city’s centrepiece palace is a grandiose, sparkling, golden affair, less impressive from the inside than out, and fierce in its contrast to what we’d see next.  This was clearly what tourists were supposed to see and be impressed by.  Our waiting tuk-tuk took us to the bustling town centre’s ‘Russian Market’, an insular, damp and narrow undercover series of canvases.  It was near closing time and the stalls were packing away so we didn’t browse with much relish and soon returned to our transport.  Around the vehicle we found a young, dramatically pleading woman cradling a screaming, barely clothed baby.  Like earlier beggars, she alternated between moving her hand in circles over her stomach and putting imaginary food in her mouth to indicate hunger.  Unlike others, she practically thrust her child in our faces as we passed.  Literally forced to turn our cheeks, we tried not to look too hard, walked past her and boarded the tuk-tuk.

Riding around Phnom Penh, it feels like the wealth gap is extremely large, awfully apparent.  Whereas there was clearly abject poverty in Saigon and in other smaller places along the way, here there seems to be that, plus a wealthier, prosperous Range Rover driving band of people living in lavish oblivion.  There seems to be nothing in between, as if a few steps of the ladder are glaringly amiss.  It suggests a level of rife corruption.