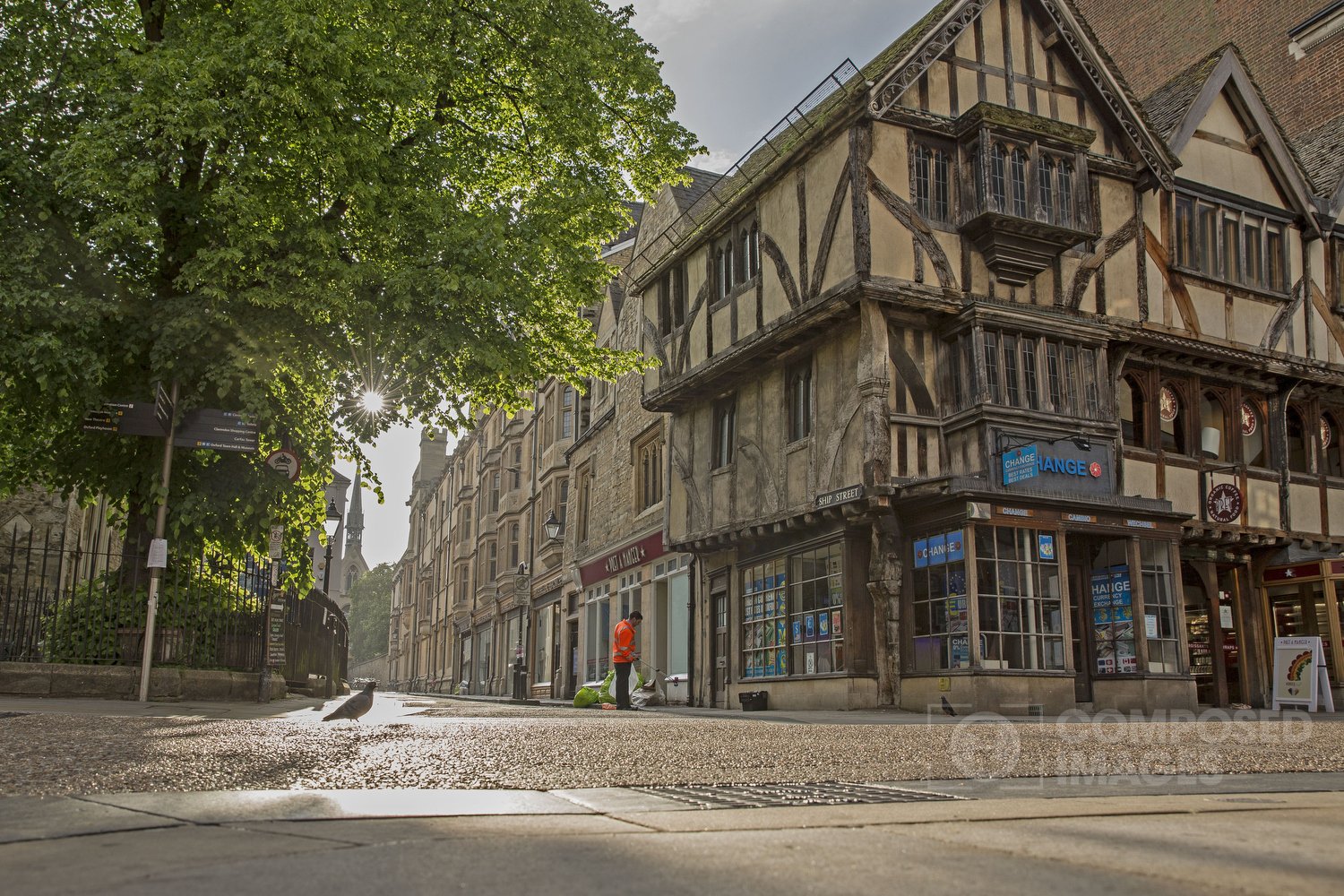 Loving street photography means loving cities. All towns and cities have the capacity to fascinate. They all contain stories about how and why a population of humans was drawn to a particular area, what industries it was built on, how it grew or shrank.

Street photography feels easiest when you are fresh to a place, seeing things for the first time; when you are essentially a tourist. It gets harder, but possibly also more rewarding when you know a place intimately, perhaps too well: every last nook and cranny of a town, every alleyway and cobble, each gutter where puddles collect, every high-rise angle, multi-storey car park or frequently vandalised bus stop.

It gets harder when you grow bored by a place, like most young people do by their home town when they’ve never lived anywhere else. 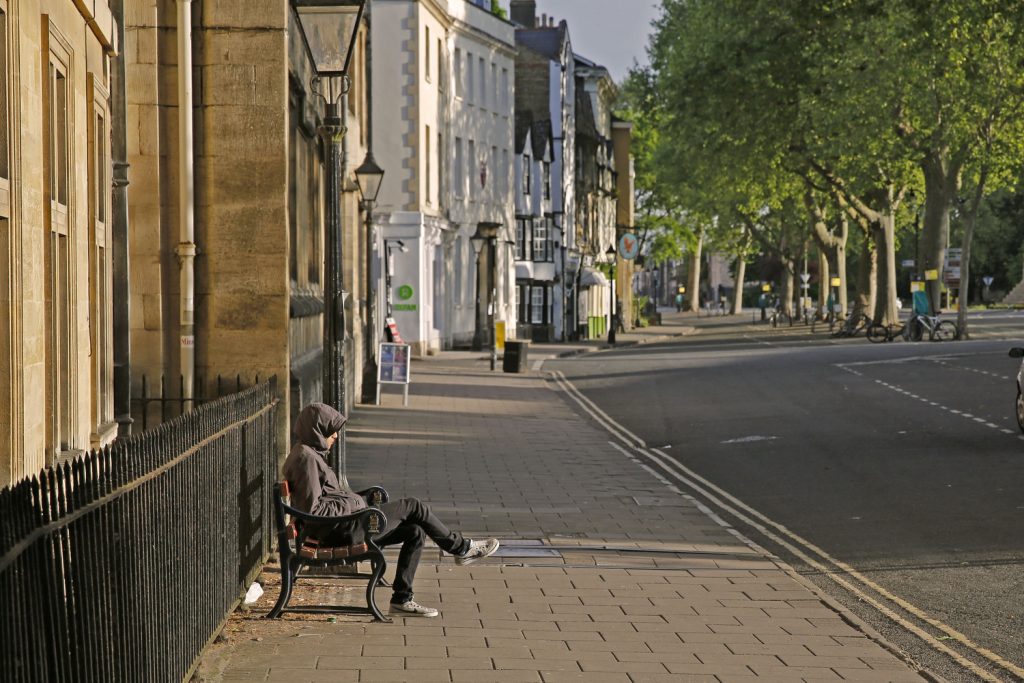 Having lived in Cardiff for most of my adult life either side of stints in Cheltenham and London, I sometimes feel there’s nothing left for me to photograph here, or that it holds limited interest for me now. And of course I’m always wrong.

On waking early in the middle of Oxford on a beautiful late May morning last weekend, my urge was to get out and explore. I have visited a number of times over the years to see family, but never quite succeeded in piecing the city together in my head. So I welcomed this chance – even if it was to rob me of some sleep.

We were lucky enough to be staying the night in Queen’s College of Oxford University. (Amongst its alumni are Sir Tim Berners-Lee – best known as the inventor of this here quite handy World Wide Web thing).

Like much of the city’s neo-gothic architecture, on that morning the college gleamed, almost smouldered with wisdom and knowledge. Really old looking people appear to have a certain wisdom reflected in their weathered and wrinkled faces. It was sort of like that. 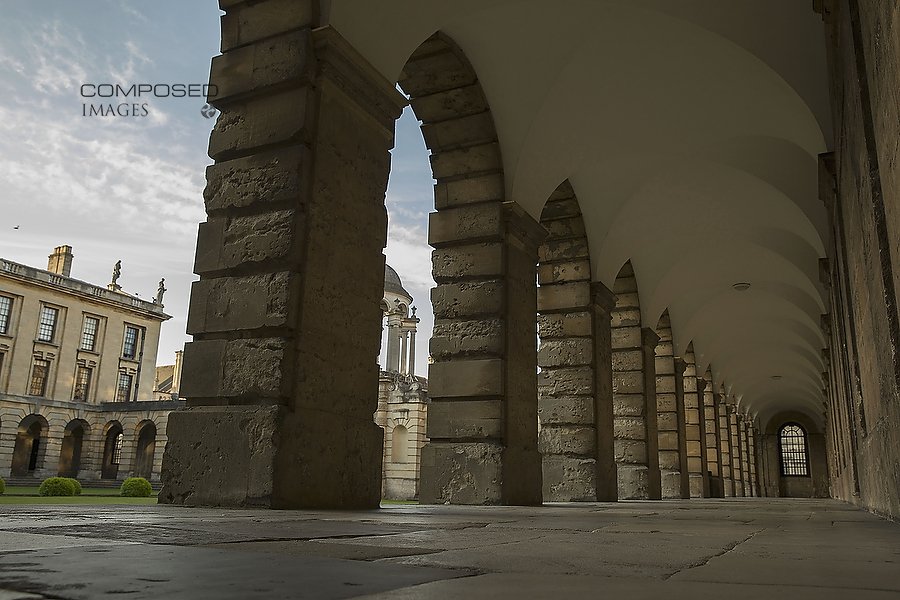 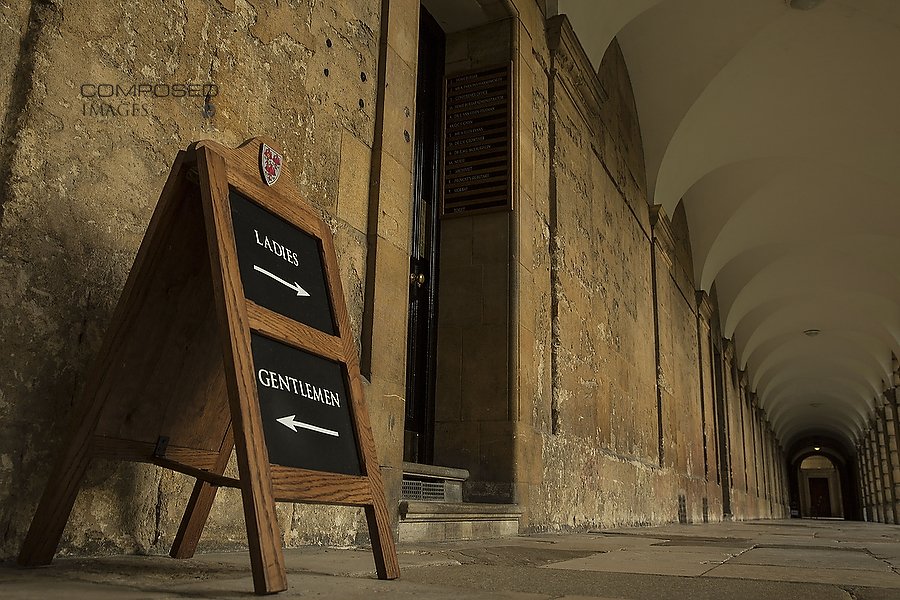 It’s hard not to be seduced by age. History seeps from these famous spires, brickwork and even modest wooden beams of buildings. You can see why so many students and tourists are drawn to the place and bowled over by its imposing majesty. You can see why, for a certain English elite educated at private schools like Eton, this is simply a natural progression; perhaps an obvious step on the path to Westminster and the halls of political power.

It brought to mind a similar culture and atmosphere of UWC Atlantic College, a magical Hogwarts-like castle college in the Vale of Glamorgan where I’ve photographed a number of reunions. 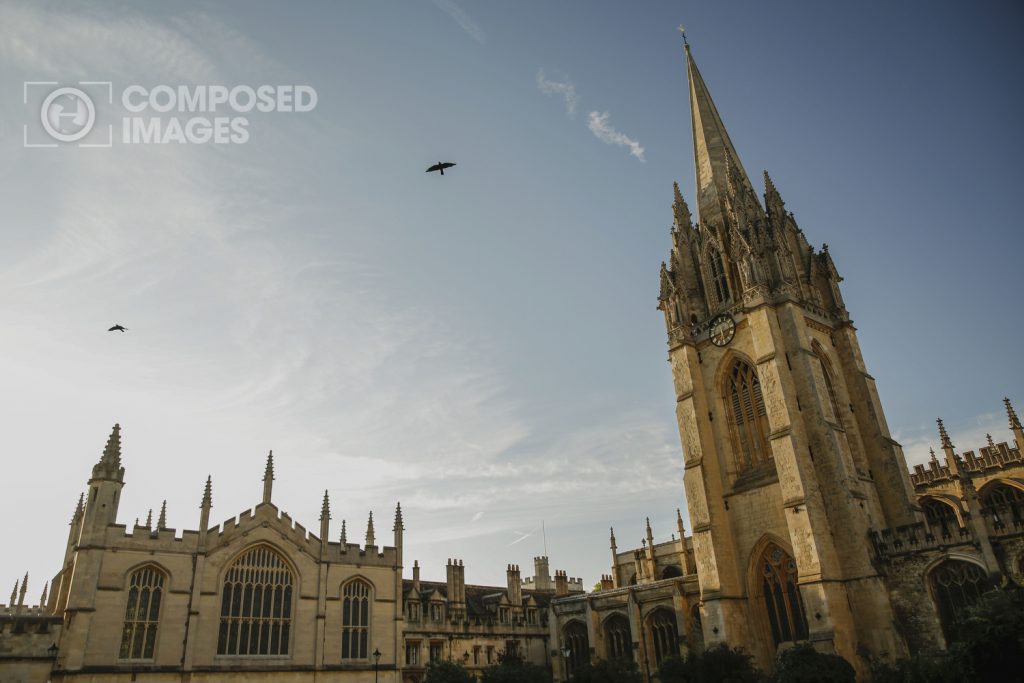 I couldn’t resist a few ‘real time’ street shots via Instagram, which I started using again recently after a hiatus of around three years. It’s changed a lot.

Early mornings are probably my favourite time of day for street photography. I love a city when it’s quietly waking up in ones and twos, slowly creaking into life, council cleaners on the streets, morning runners, early-risers, long distance lorry drivers, bedraggled one night stand walk-of-shamers.

There can be a dystopian tranquillity to early mornings that makes you feel like you have everything to yourself and all the time in the world. But in reality it’s all too fleeting. In a city like Oxford, overrun with swarms of tourists and students at most times of the day, it felt even better to be out early. Although I didn’t steal a march on all of them. 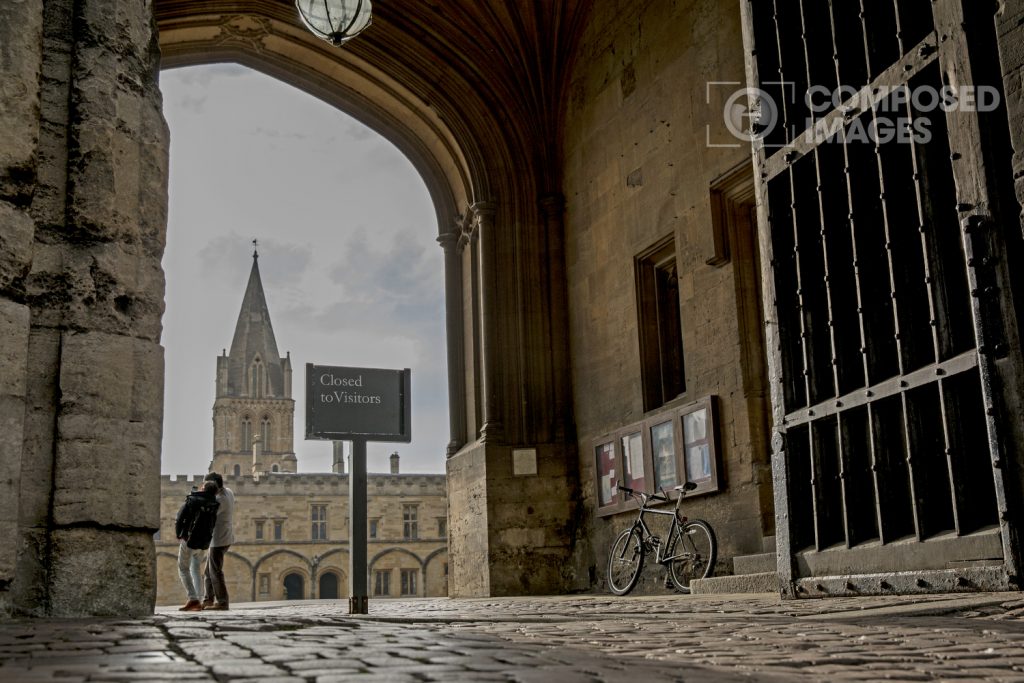 A few shots summed up a dynamic, unpredictable element of street photography I love: how you can compose a scene and wait for the action to happen around you.

Like most photographers, I’m always a mug for a reflection. The rising sun was bleaching buildings on this road, illuminating the leading lines and conjuring bold reflections in this shop window. 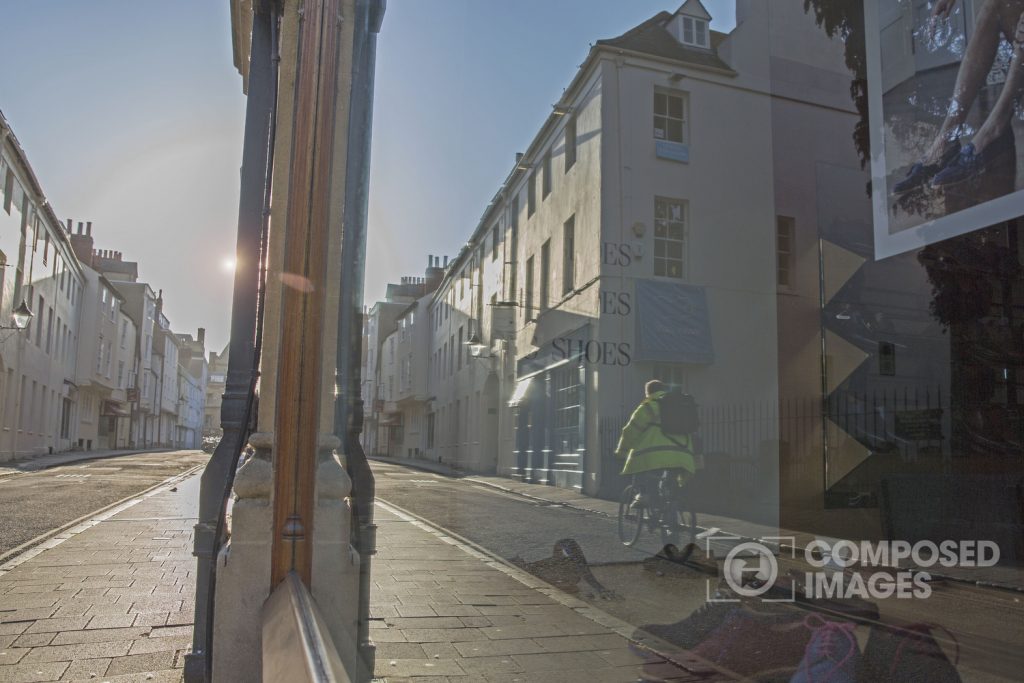 Attracted by arrowing early light and shadows criss-crossing inside an old pub, I shot a couple of frames through the glass before hearing approaching footsteps. Peering in, the unwitting stranger, possibly wondering what the hell I was doing, sort of made the shot. Thank you, stranger. 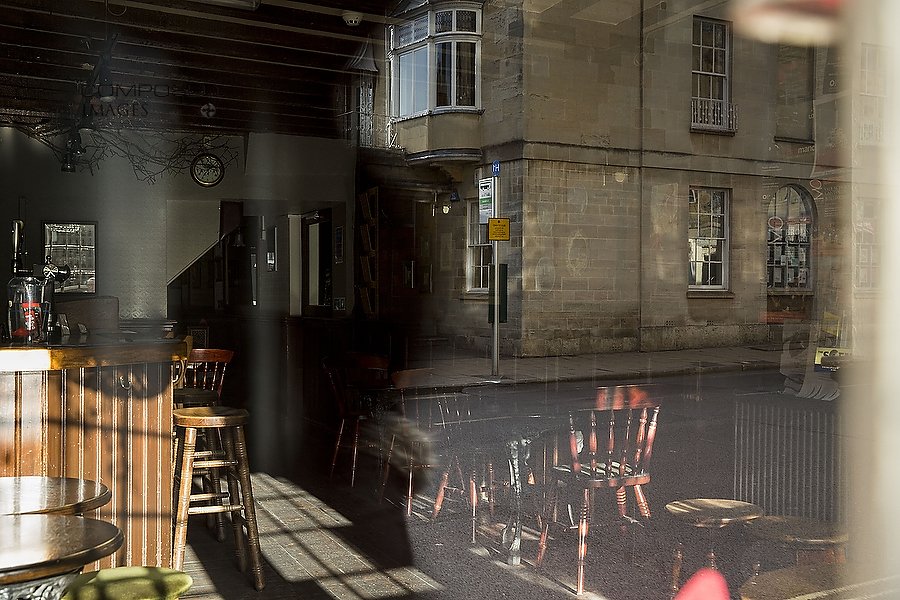 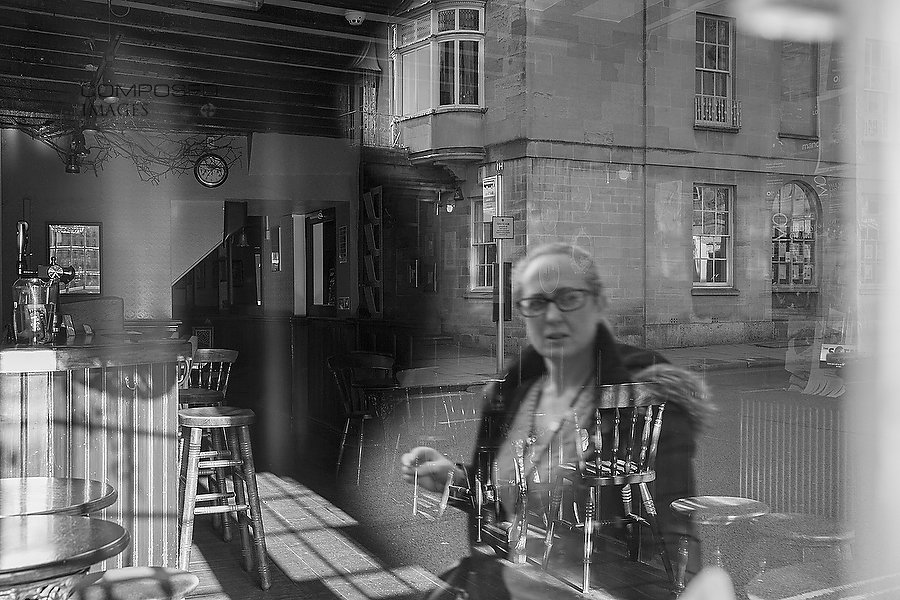 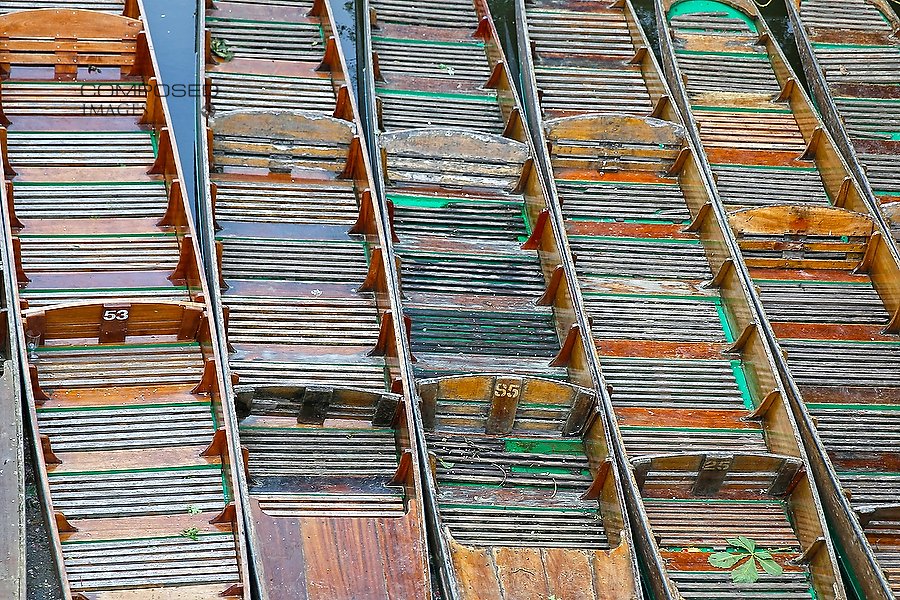 An elderly gentleman appears to select some abandoned newspapers from a window ledge. 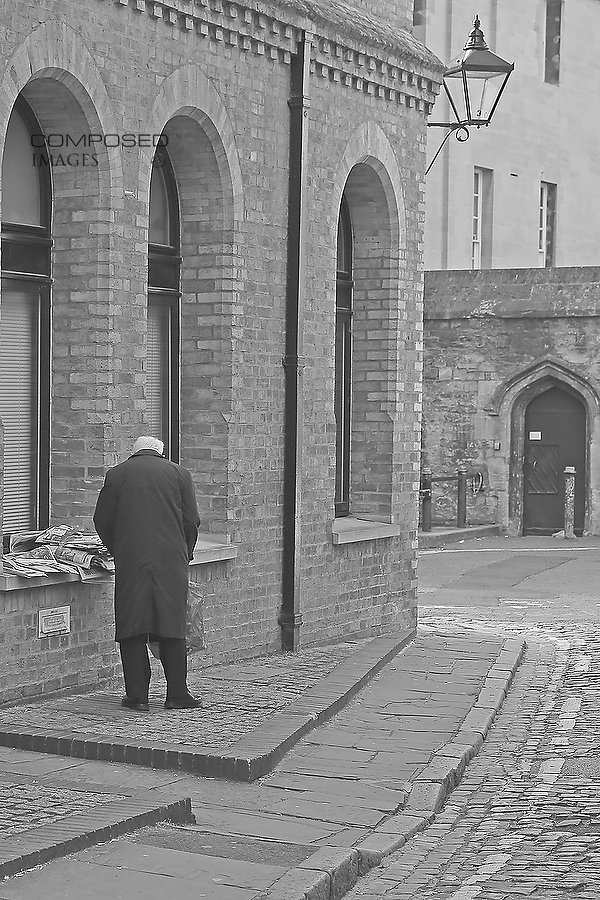 Finally, a building I fell in love with. One of those Dickensian structures you can imagine existing for multiple centuries, people milling around it in bygone times phenomenally different from our 21st Century selves. There was also a quirky irony in its current shop tenant: Change. 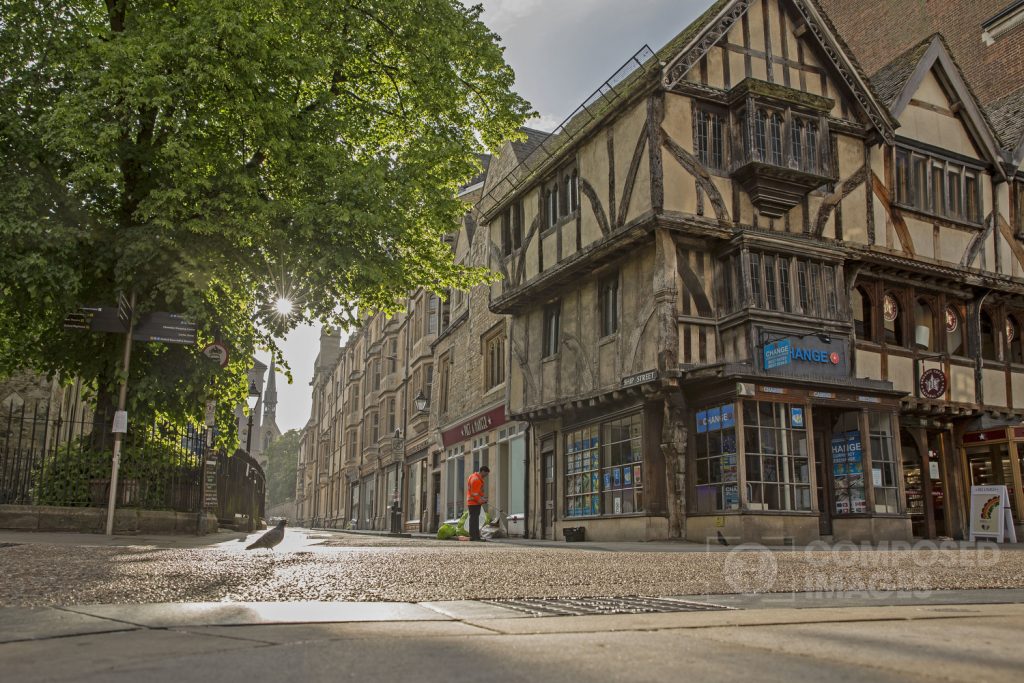 […] By way of contrast to small Welsh valleys’ towns, shortly after I took an exploratory early morning stroll of the resplendent streets of Oxford. […]