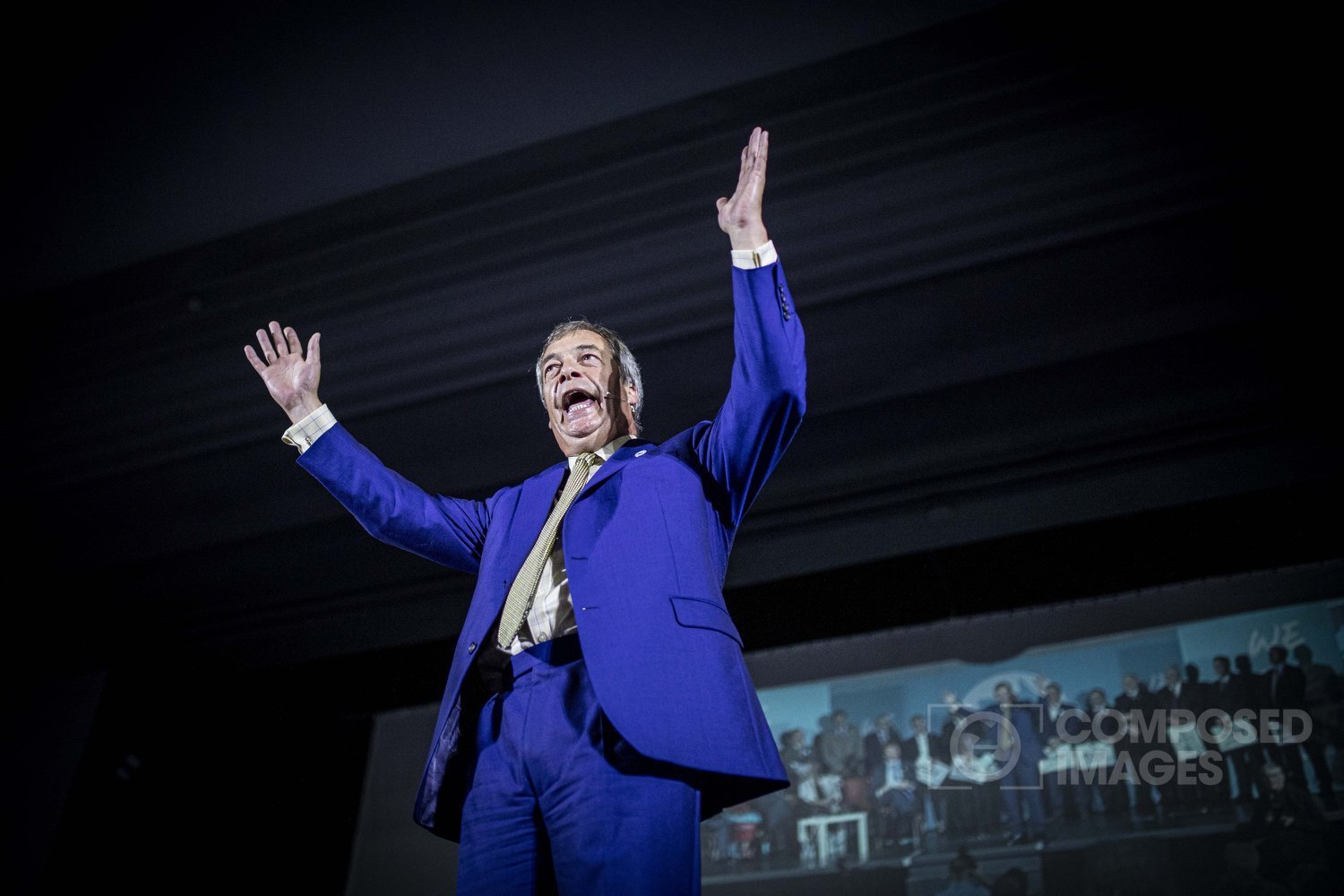 The Brexit Party conference tour stopped in Newport on Saturday. Occasionally you find yourself photographing events which seem to firmly timestamp a moment, to reflect something much wider. Which isn’t to claim the images are unique or remarkable in the widest sense. This was one of several similar Brexit Party conference dates across Britain, merely one event of a campaign. 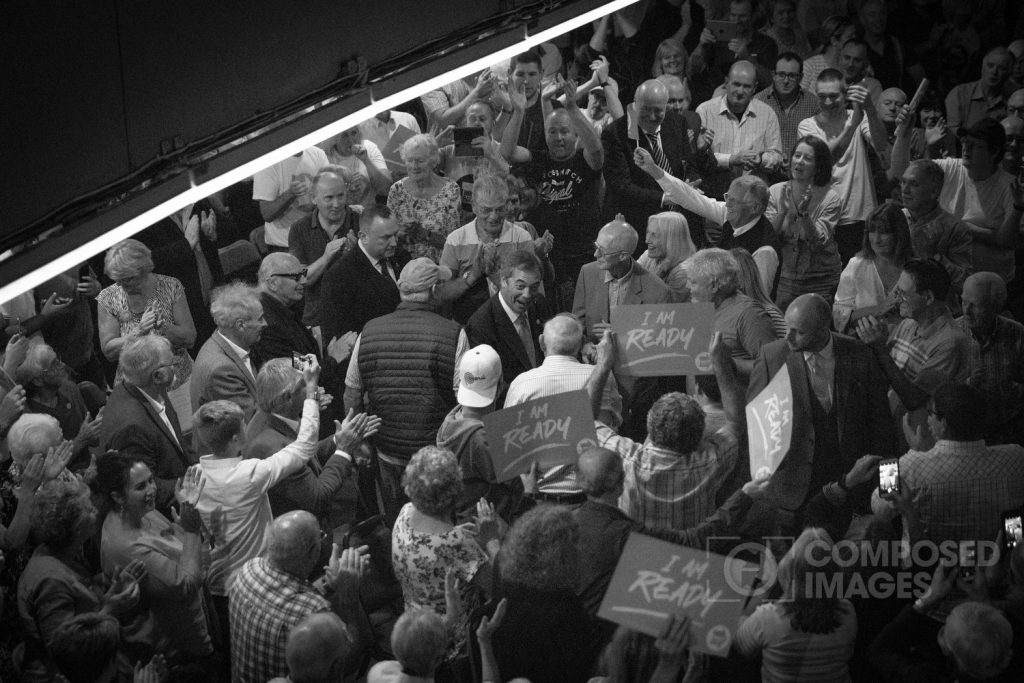 In that sense it was much like the Climate Strike activism the day before, the largest coordinated activity of its type on one day across the world. 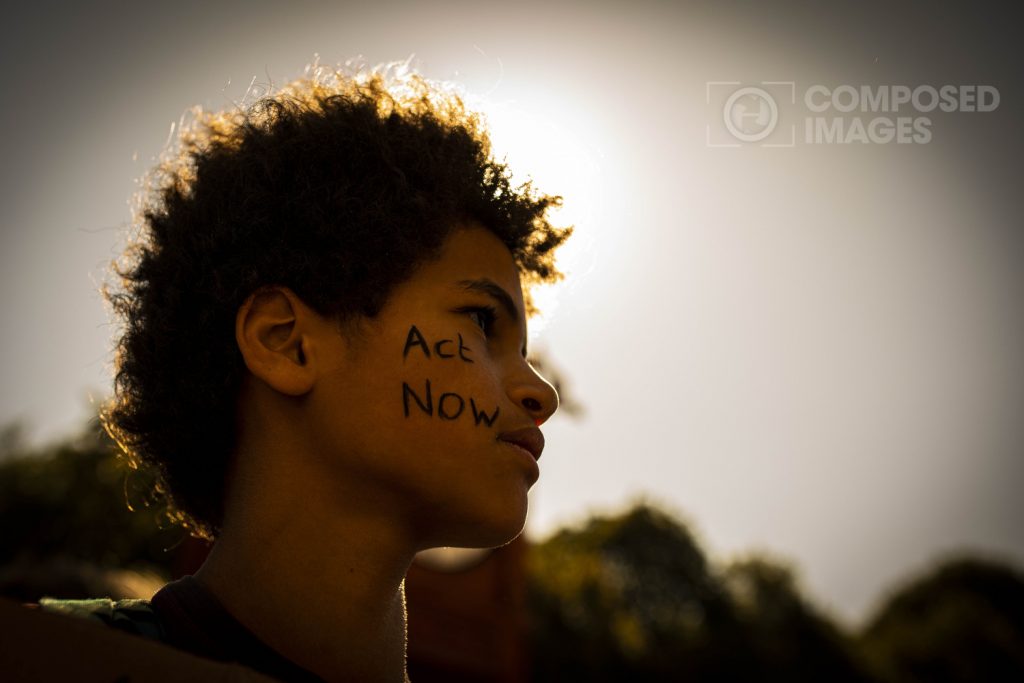 Within my library of images at least, this Brexit Party conference perfectly encapsulated the current societal division of Britain. It openly presented the section of people who ardently subscribe to the views of Nigel Farage, unfazed by the prospect and perceived scaremongering of a No Deal exit from the European Union. As well as the view of those on the opposite side, literally over the road.

Protesters stood over the road outside the theatre where the conference was being held. Perhaps a couple dozen of people stood around a war memorial with Anti Racism, Anti Farage and Pro Immigration banners. I was able to work an angle shooting them through the front doors of the theatre and Brexit Party supporters entering the venue. 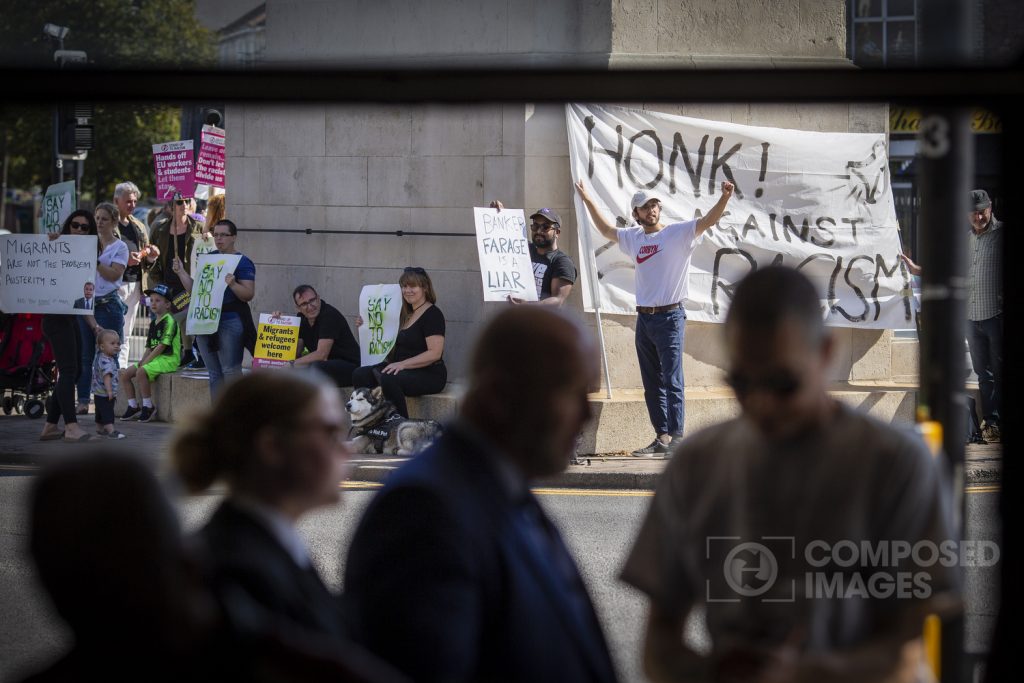 A number of speakers took the stage before Nigel Farage appeared as the rousing finale. They included party chairman Richard Tice, who gave a vivid demonstration of how Britain is imprisoned by the EU but can break free. 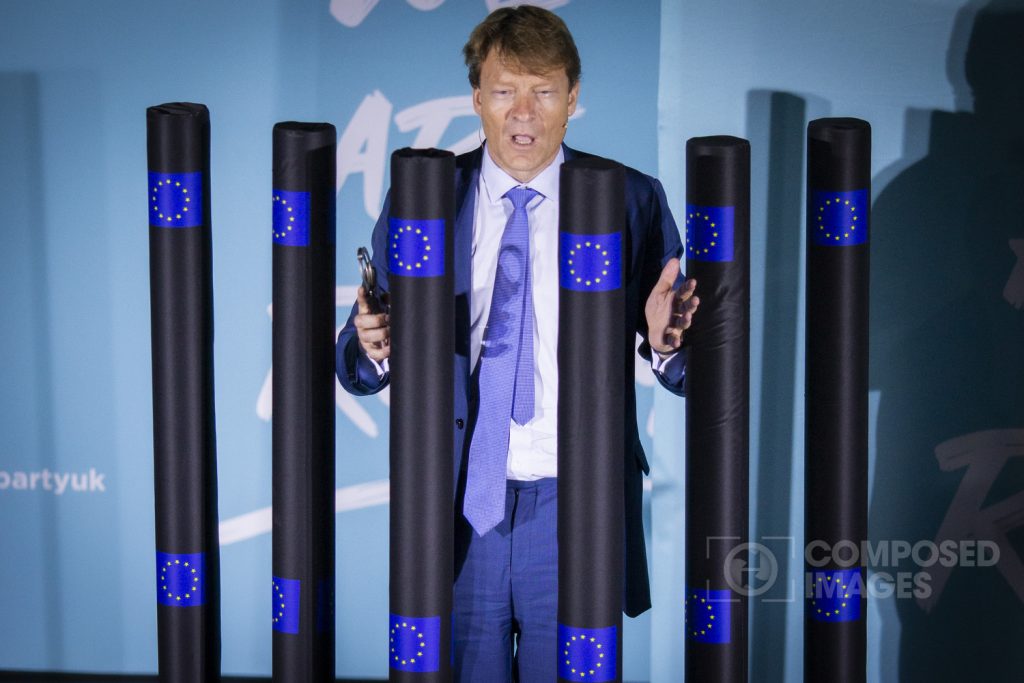 Political veteran, Ann Widdecombe still appeared possessed of an indomitably fierce spirit and elicited a standing ovation from the audience. 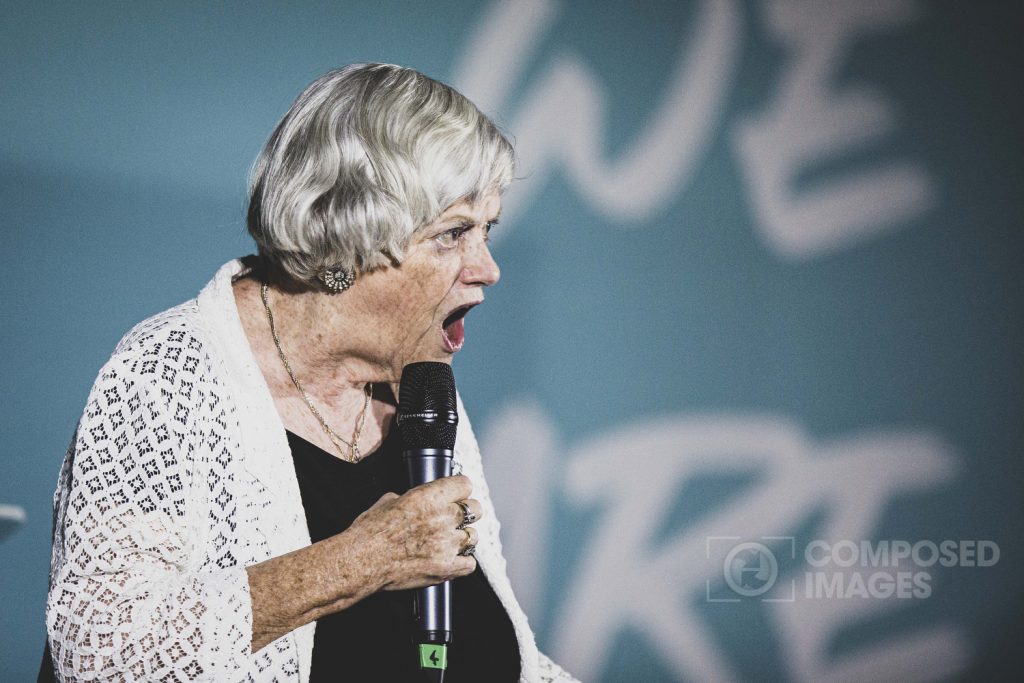 Speakers representing local Welsh interests included Nathan Gill, James Wells and Julie Price. Most were sitting members of the European Parliament thanks to the success of the Brexit Party during the European elections several months ago. 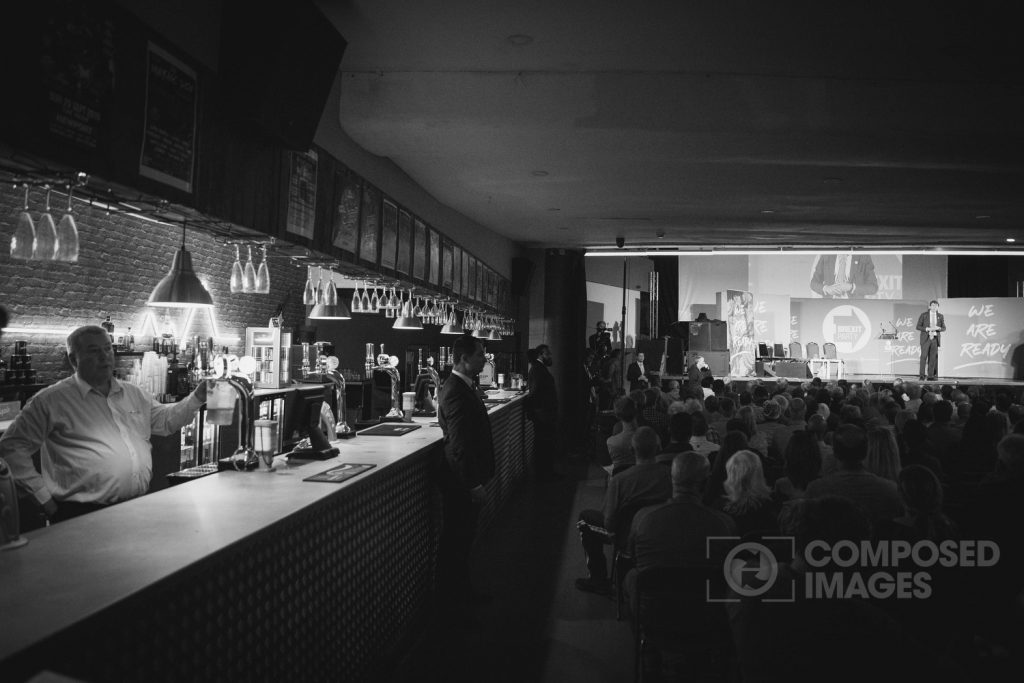 But all eyes here were hungrily eyeing the next general election. A small parade of prospective Brexit Party MPs were brought onto the stage with Farage when he entered, with ‘We Are Ready’ (for a general election) the resounding message. 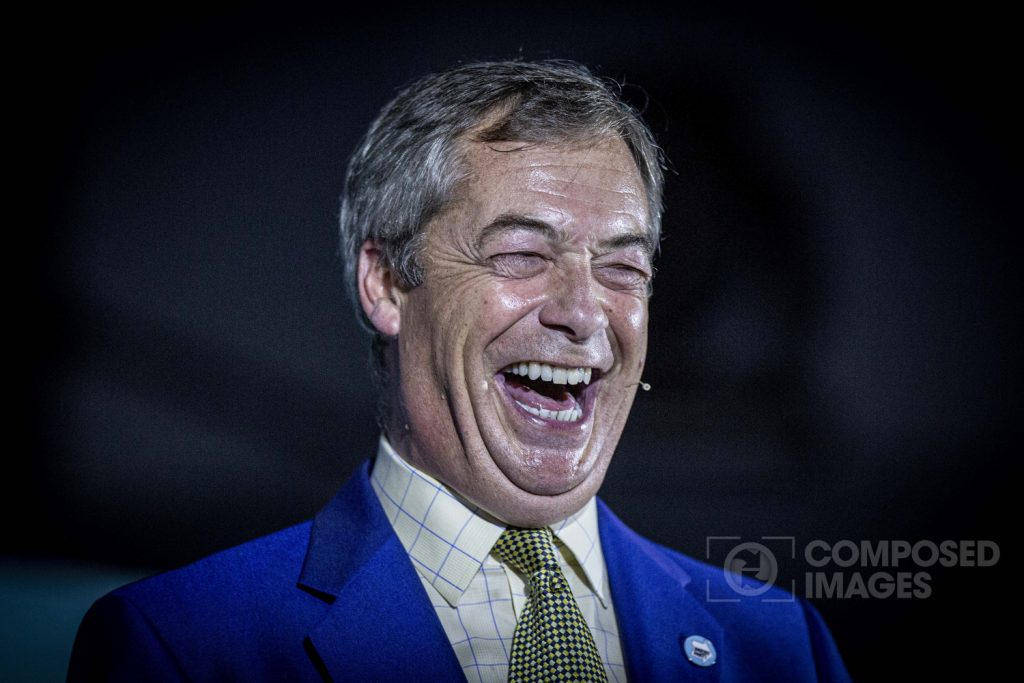 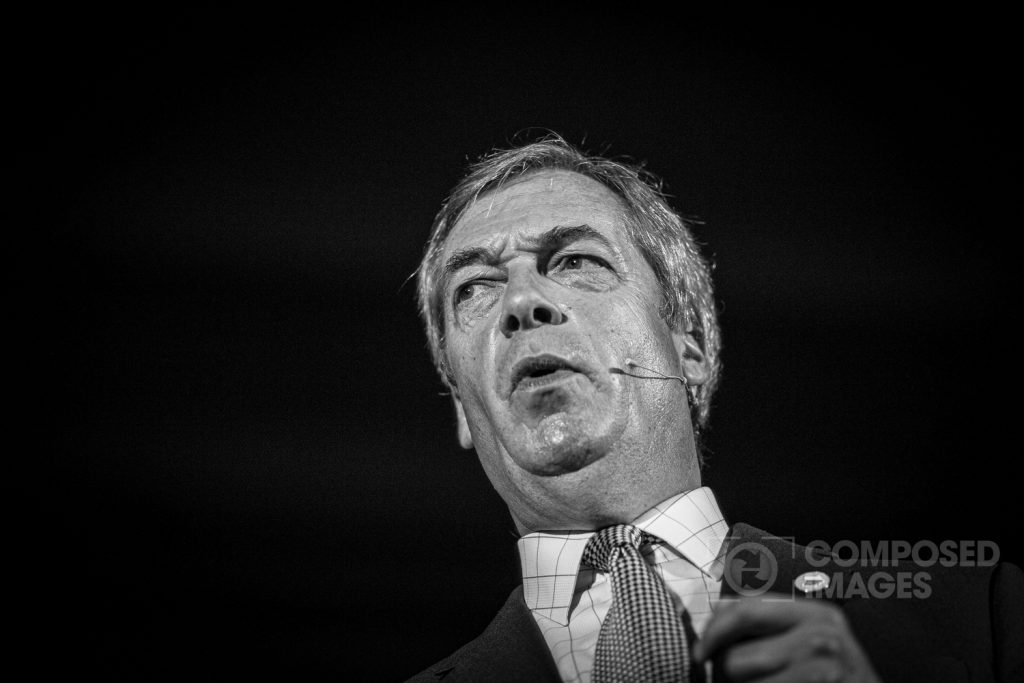 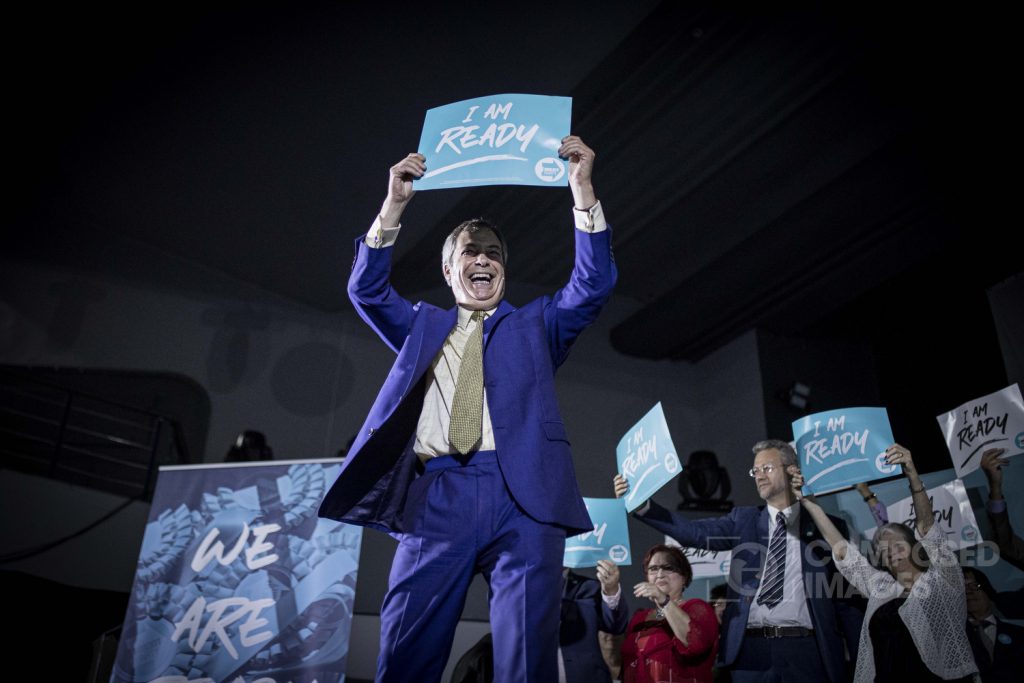 It’s hard not to relate this to my current reading material, Booker prize longlisted novel ‘The Wall’ by John Lanchester.

The fable-like dystopian tale is set in a future where the global sea levels have significantly risen to change the British coastline beyond recognition, and the mainland is protected by The Wall. The Wall is guarded from ‘The Outsiders’ by enlisted young people (Defenders) who must fight to the death if necessary. Issues of immigration and Brexit ripple along in the novel’s undercurrent.

Exactly how the coming months and years will play out still seems bewilderingly unknowable. Our new prime minister Boris Johnson seems mired in new controversies by the week, if not the day. The latest concerns allegations about his relationship with a friend and use of monies to accommodate her when he was the London mayor. A formal inquiry has been launched by current mayor Sadiq Khan. The supreme court verdict concerning the legality of parliament’s current prorogation will be revealed tomorrow morning. Each time Johnson encounters a member of the public unplanned, it seems like an accident waiting to happen, then happening. Everything is moving fast.

The current Brexit deadline day of October 31st is looming and the prospect of a general election being called is very real. This is at a time when it feels more reasonable than ever to be absolutely apolitical.

To have no solid political opinions, privately or publicly, at other times you might attribute to a level of willing ignorance or avoidance. But today, for even the most engaged consumer of ostensibly objective political news, being clueless is totally legitimate. It could be speculated that the current chaotic landscape will lead to a low turn-out of voters when the general election arrives, opening the doors to fringe parties.

Traditional blue and red tribes are dissolving. The main parties of the Conservatives and Labour seem deeply internally fractured. Some might say broken. Which at least has had the affect of busting the theory that ‘they are all the same’. They are evidently not. They are comprised of incoherently different factions, defined largely by which side of the Leave/Remain fence they sit. Fringe parties like the Liberal Democrats and the Brexit Party are attempting to capitalise on this and capture floating voters with  unambiguous Leave/Remain messages.

From here it seems impossible to gauge any certainty about the long term political future of the UK.