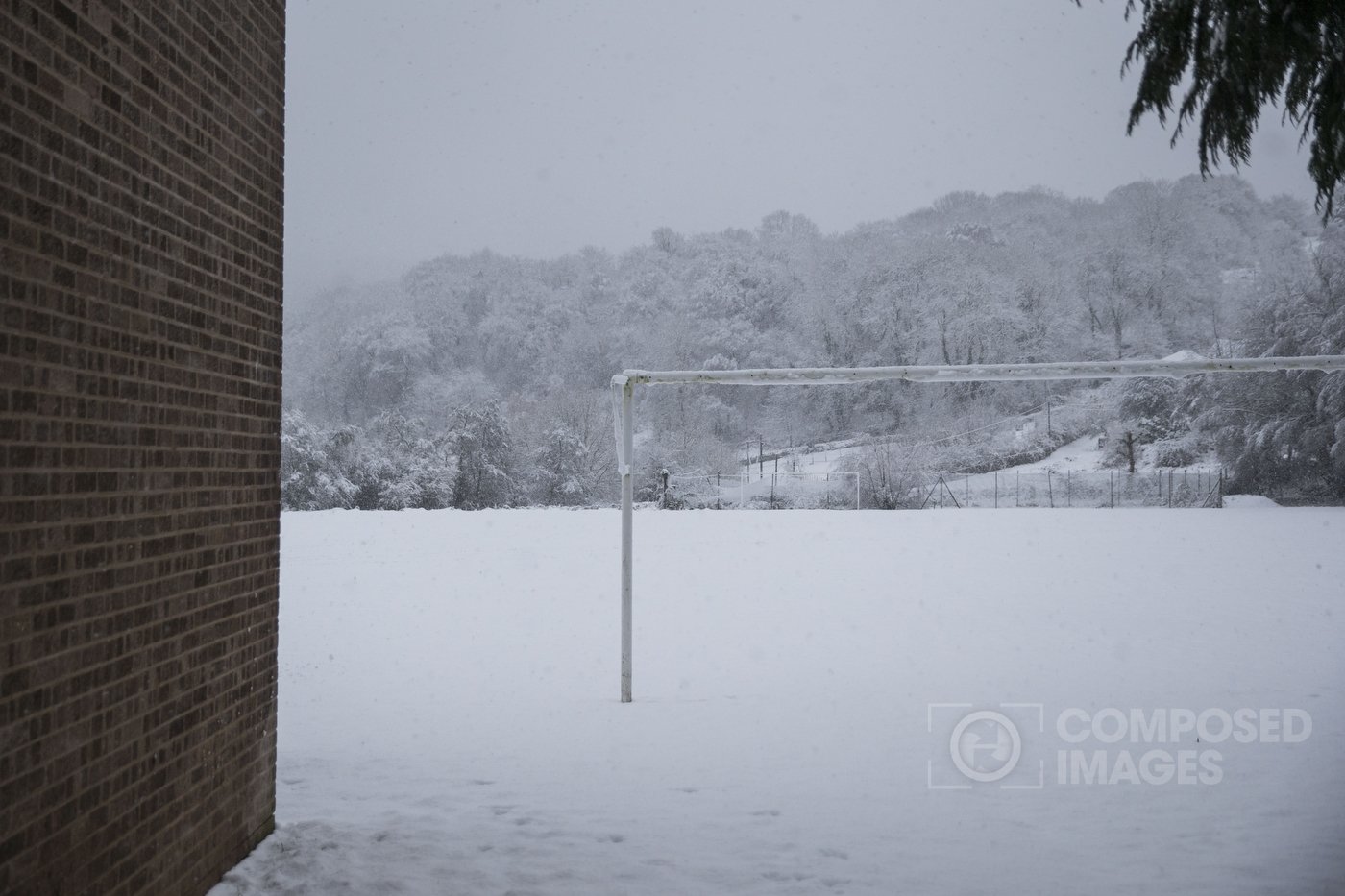 Football lovers usually have a specific personal place where, for them, football belongs. This place is often where it first kicked in, that football obsession, or where it was steadily nurtured over a childhood. You often see highly produced television features where players are taken back to their roots, illustrating ‘rags to riches’ stories, and asked to talk about their youth. Football belongs in different places for everyone. Places can be parks or pitches, wastelands or recreation grounds, the streets of council estates or garage forecourts, the stadium where you saw your first game. You can make do with jumpers for goalposts, traffic cones, garage doors, sections of fences or, if you’re lucky, actual goalposts. Providing there’s enough space to kick a ball with some freedom, anywhere will do.

The place where I first started playing outside my own garden was Soudley Recreation Ground, or to us, ‘the rec,’ a four minute walk down the road from our house. We were lucky to have this place in our valley village, one of the best pitches in the Forest of Dean. 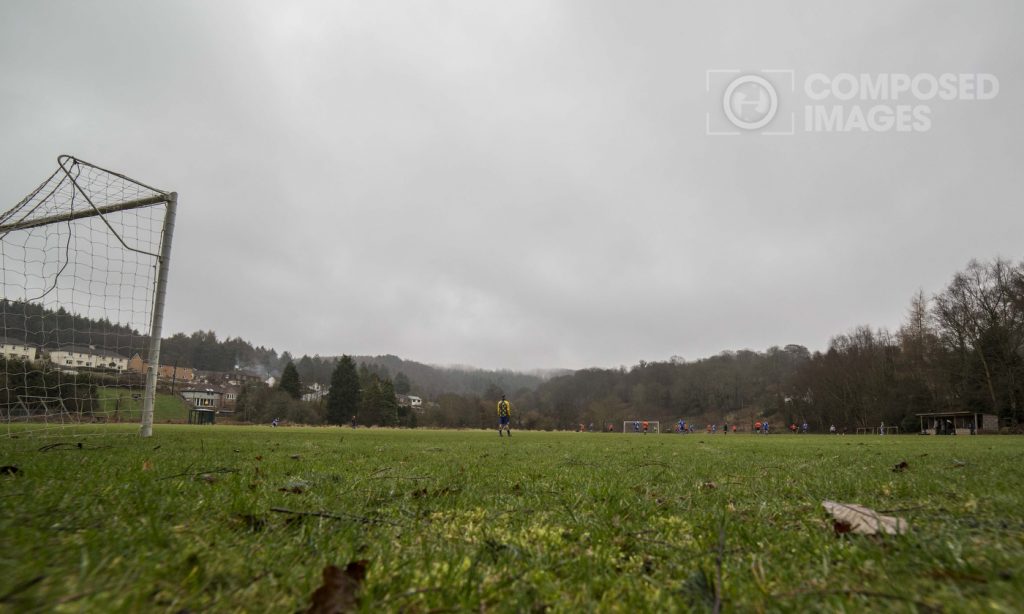 It was here we practised the game, me and other villagers and visitors; here that we kicked a ball around in the big goalposts and one set of smaller ones; here we tried to replicate the goals of our heroes (Jurgen Klinsmann or Teddy Sheringham for me). With other football crazy neighbours and sometimes on my own, I tried hard to be better than average and never quite succeeded. 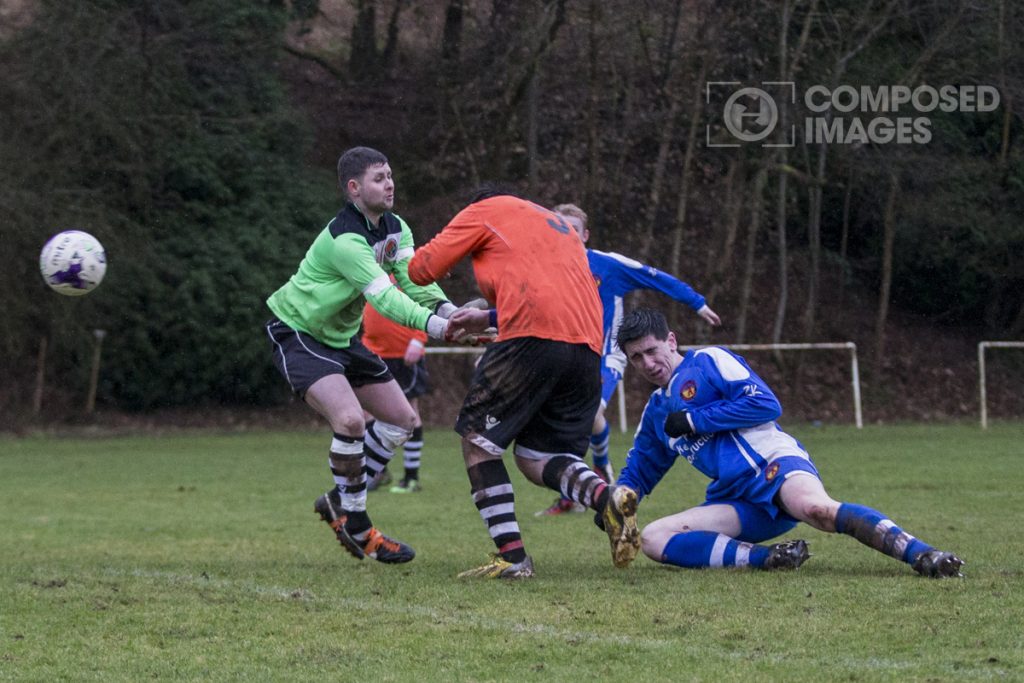 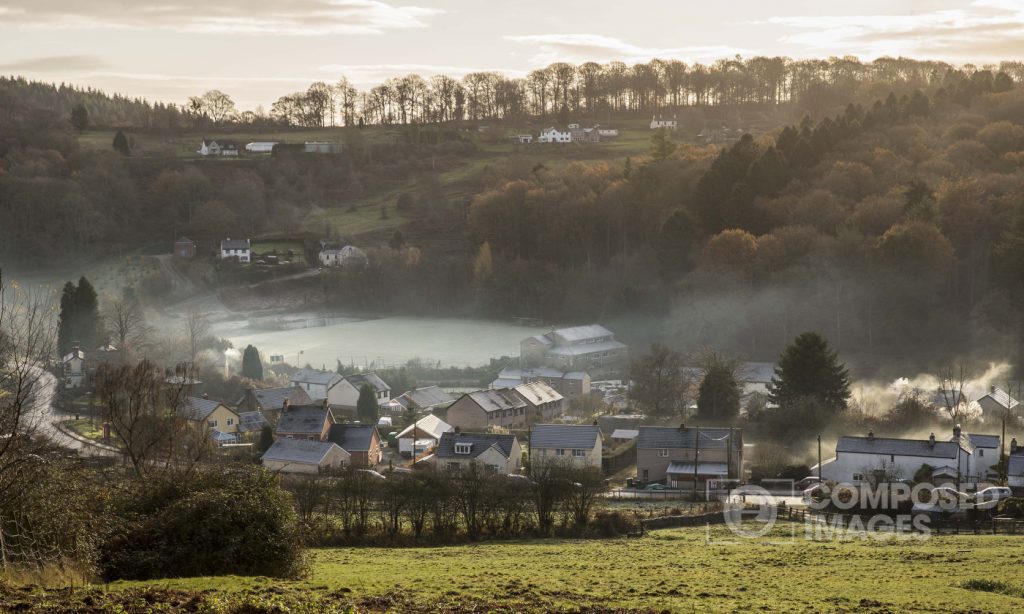 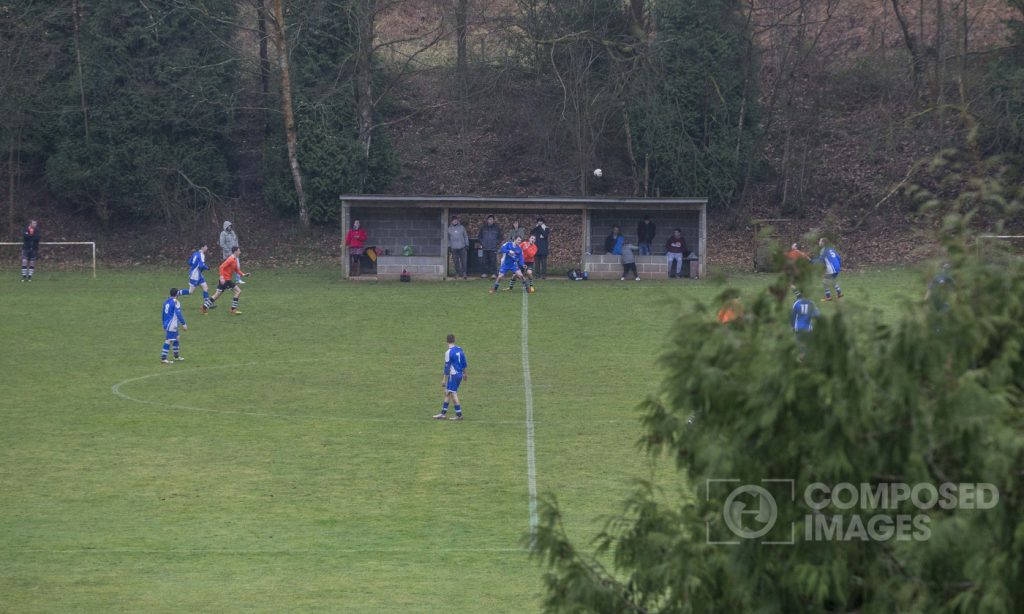 A general view during the North Gloucestershire Division 3 match between Rank Outsiders and Redbrook Rovers in Soudley, February 25th 2017. 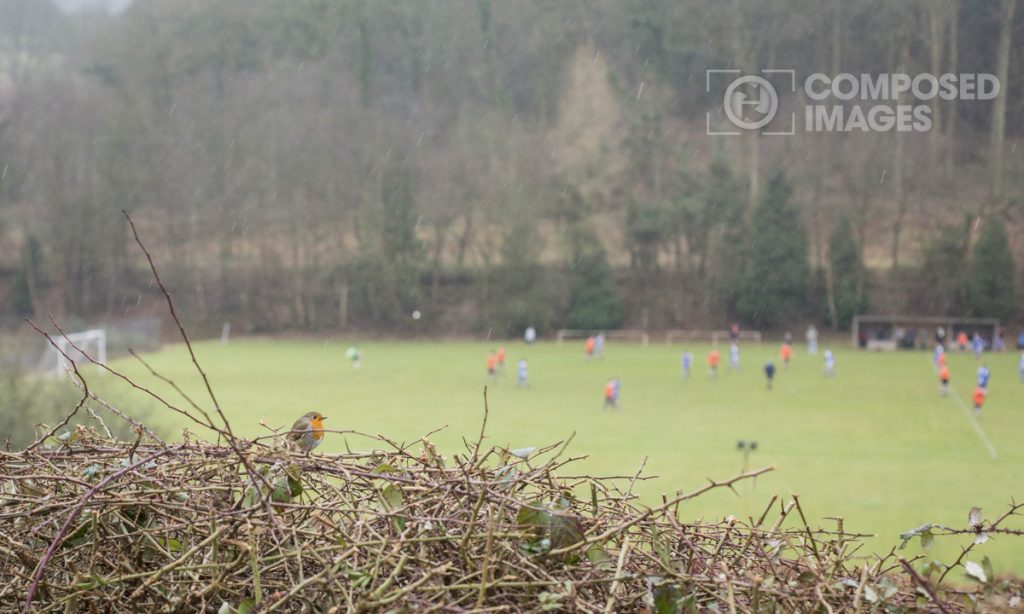 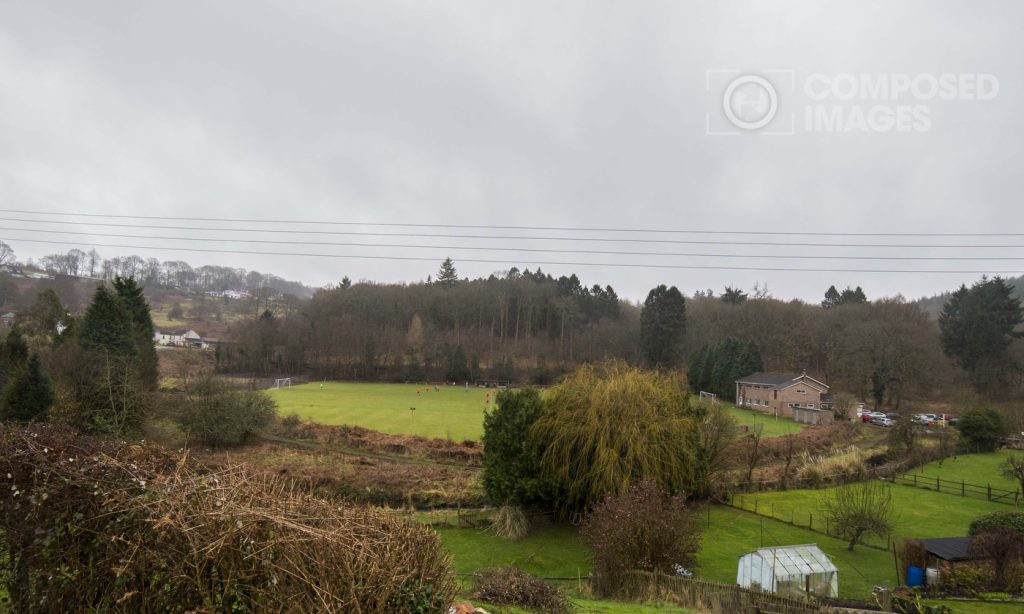 A general view during the North Gloucestershire Division 3 match between Rank Outsiders and Redbrook Rovers in Soudley, February 25th 2017.

One early success I remember vividly. A group of other kids were down in our village from Cinderford, the nearest town to our part of north Gloucestershire, and we were having a kickabout. I was playing in goal at the time and one of the leader kids, bigger and slightly older and more developed than most of us, wanted to take a penalty.

Let’s call him Tony. I’m not even sure this penalty was part of a wider game. Big lad Tony could kick the ball hard. And Tony did kick the ball hard, hammering it to my left. But I dived the right way, connected, and can still feel the force of the ball against my gloved hands as it pushed my straining fingers back. To the stunned surprise of everyone the ball stayed out. I felt quietly but sweetly victorious. The Cinderford kids looked at me again. I was briefly reappraised. 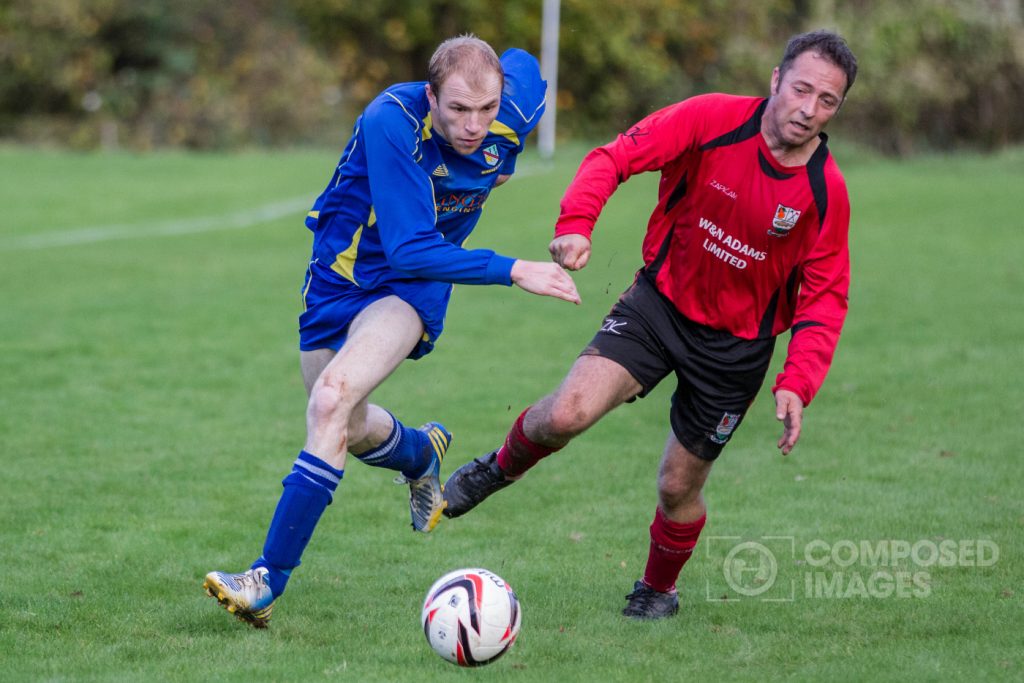 Action from the local village derby between Soudley and Blakeney, October 25th 2014.

On most Saturday afternoons between September and May those urgent angry voices begin to bellow and echo around the valley, infused with the West Country Forest drawling accent. In the early 1990s I would wander down the road to watch. I can still picture some of those players now, remember a few characters, nicknames, moments of action. Even witnessing action at that level had drama because, as discussed on these pages before, it always matters. But it will always be a source of disappointment that, while I played on many pitches around the Forest for another village side between the ages of around 15 and 18, I never played a competitive match on the pitch of my home village. 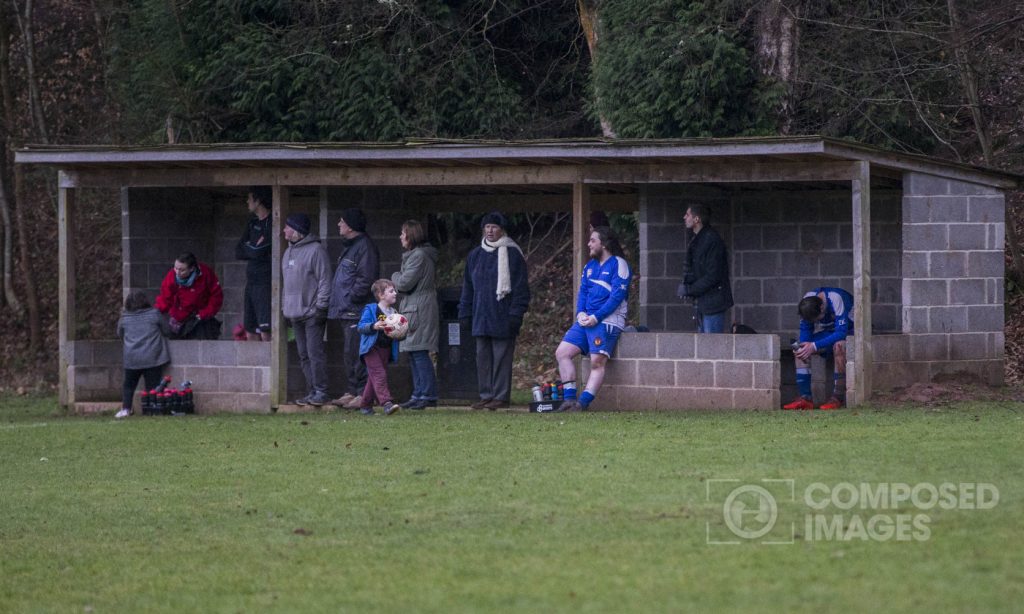 A view of the dugout during the North Gloucestershire Division 3 match between Rank Outsiders and Redbrook Rovers in Soudley, February 25th 2017.

These days not too much appears to have changed about the place. I walk past the rec fairly regularly on visits home. Over recent months on picturesque wintry mornings, I’ve taken more pictures. 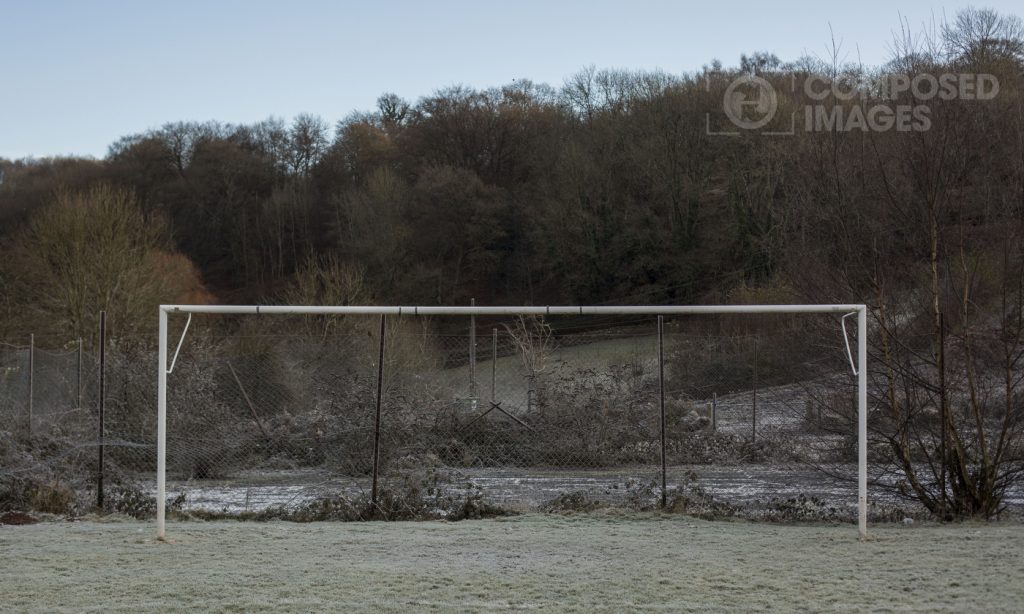 The goal in which I heroically saved a penalty, circa 1993. 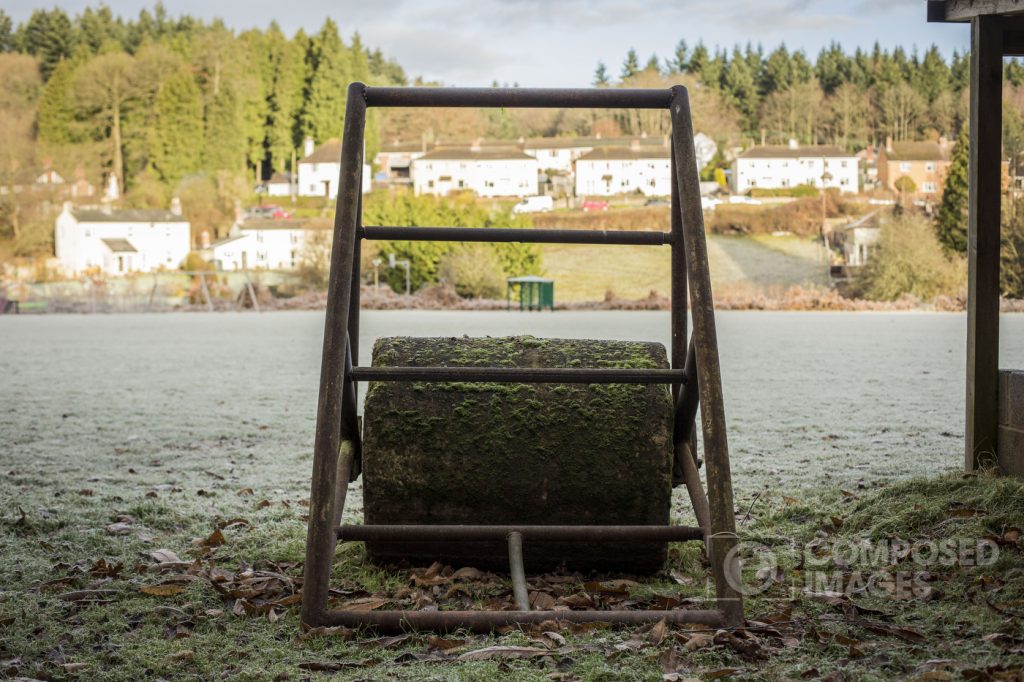 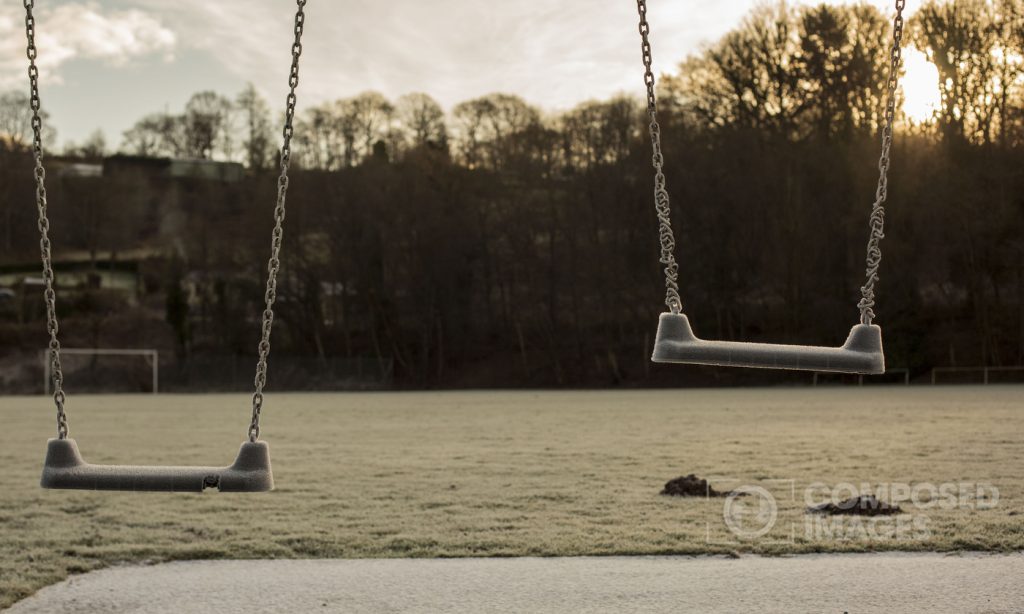 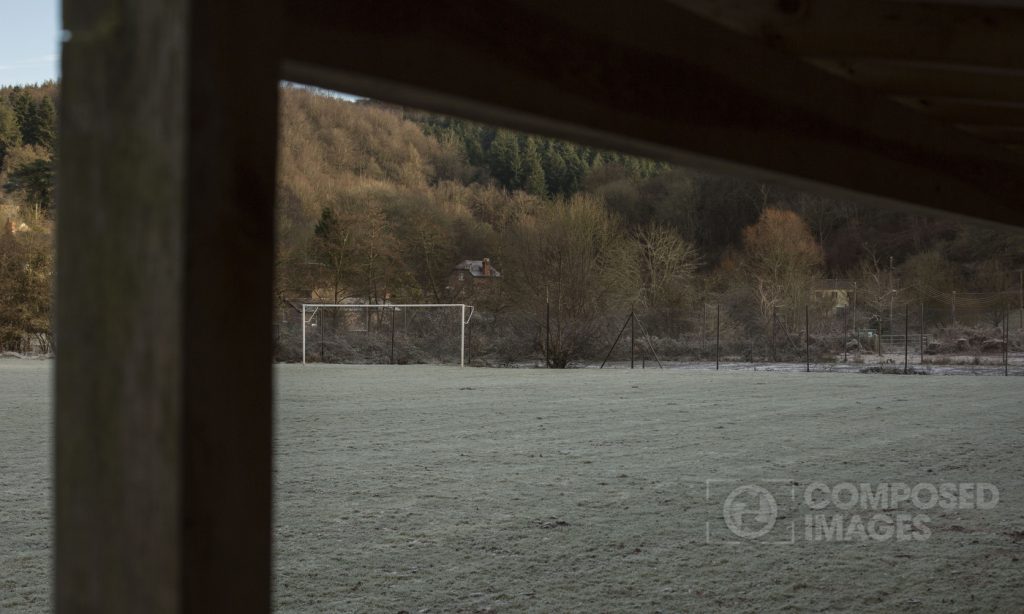 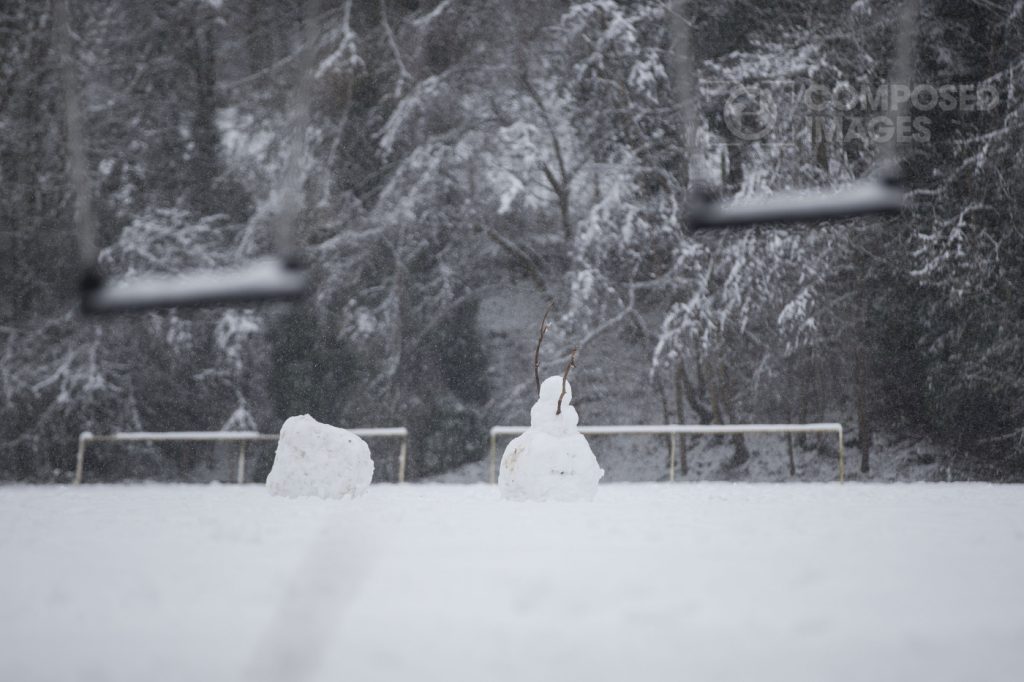 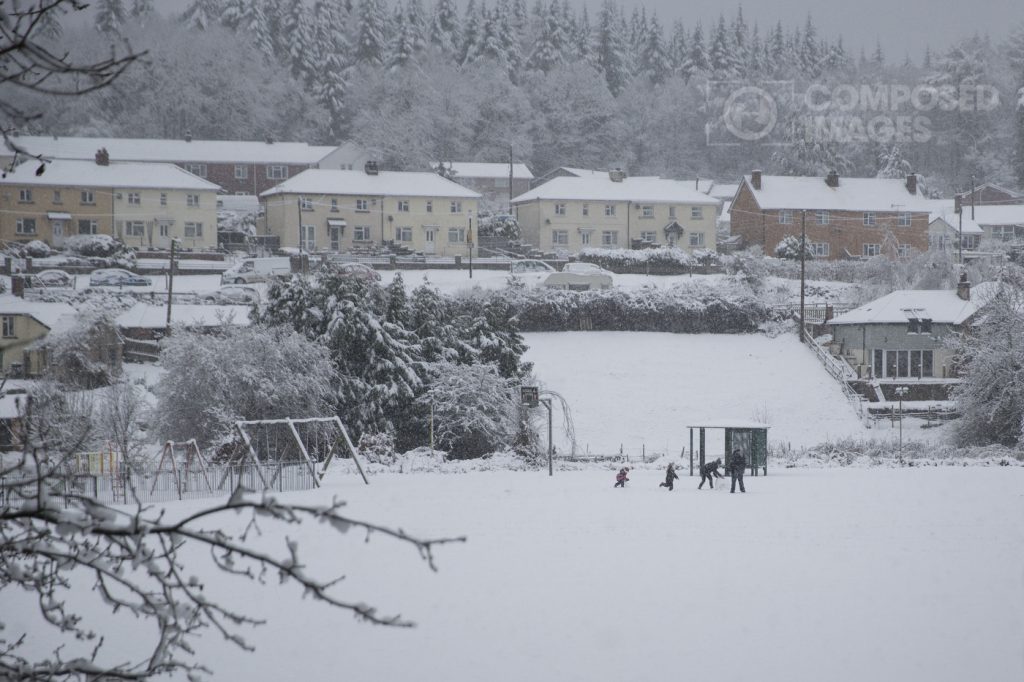 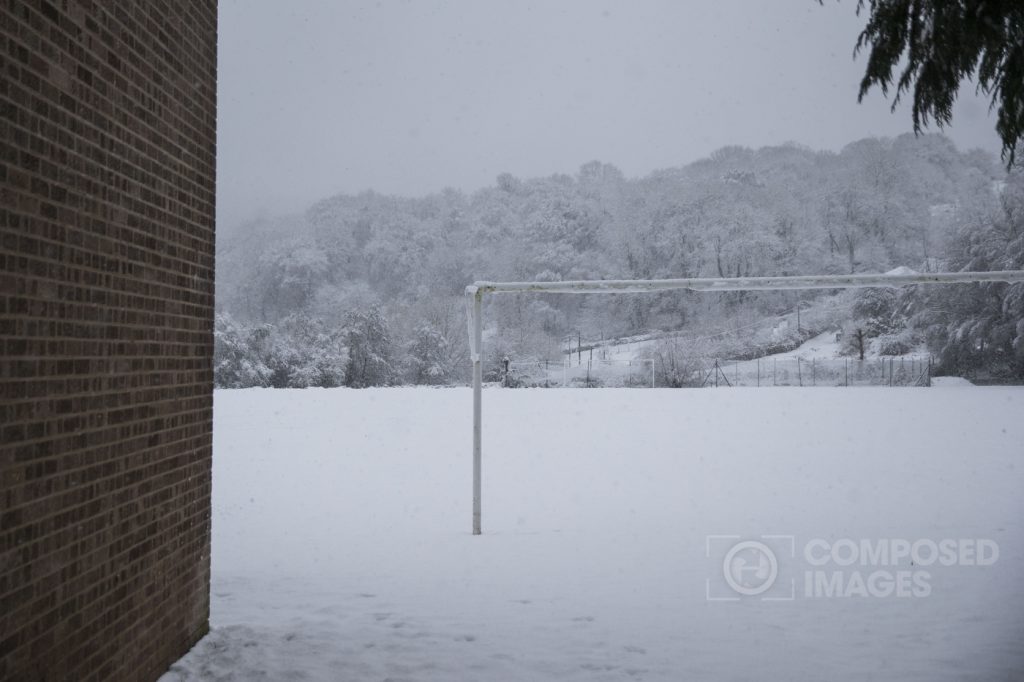 Italia 90 started it for me, this faintly ridiculous dumb love of football: England, Gazza and Lineker, Pavarotti and penalties. Soudley rec nurtured it, kept it going, allowed me to properly kick footballs without fearing the neighbours’ wrath when another wayward shot landed in their garden slightly too near their front room window pane. It allowed me to head footballs, save footballs, forced me to face penalties from big lads like Tony. The rec made football real and somehow for me, occasionally seeing it on visits home, keeps football real. Its continued unchanging existence gives my love of the game tangible roots.

Shiny, modern, increasingly characterless stadia are where the expensive confection of Premier League football is sold to the world.  But this place and infinite places like it across the world, easily missable to the untrained eye, are to me where football begins and where football belongs.