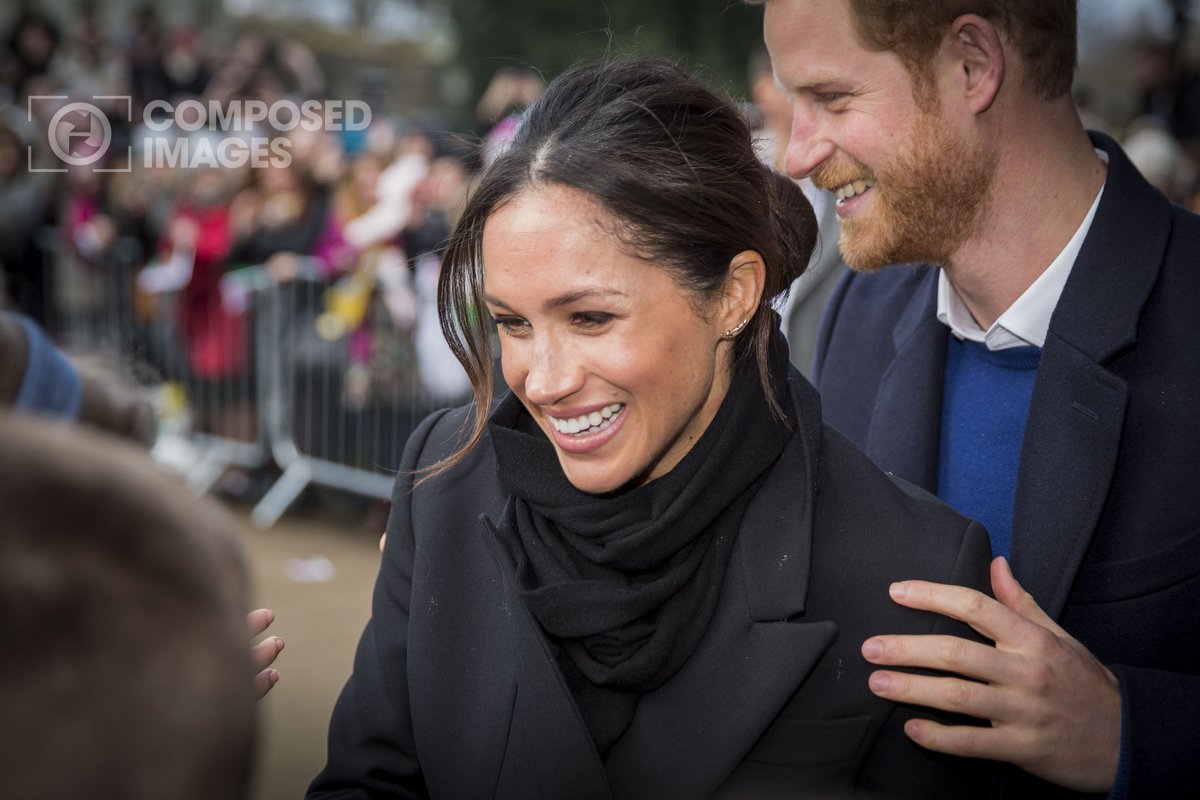 Royal family photos have global appeal. In January 2018 it was announced that Prince Harry and his future wife, Meghan Markle, would visit Cardiff. The place was quickly abuzz with excitement. Princess Catherine of Cambridge had visited a charity in Caerphilly around 12 months earlier, but with the big wedding a handful of months away, this visit would be on another level. Harry and his American national fiancé Meghan would visit Cardiff Castle in Cardiff City centre, before heading to a community centre in the Tremorfa area of the city.

While obviously aware of their eternal popularity, I still underestimated the draw of the royals. A huge number of press photographers travelled over from London to get their royal family photos, a two and a half hour journey away. Some probably came from further, as might ardent Royal fans. I can’t recall shooting an event alongside so many other lens people. Getting a unique vantage point would be tough, probably impossible. 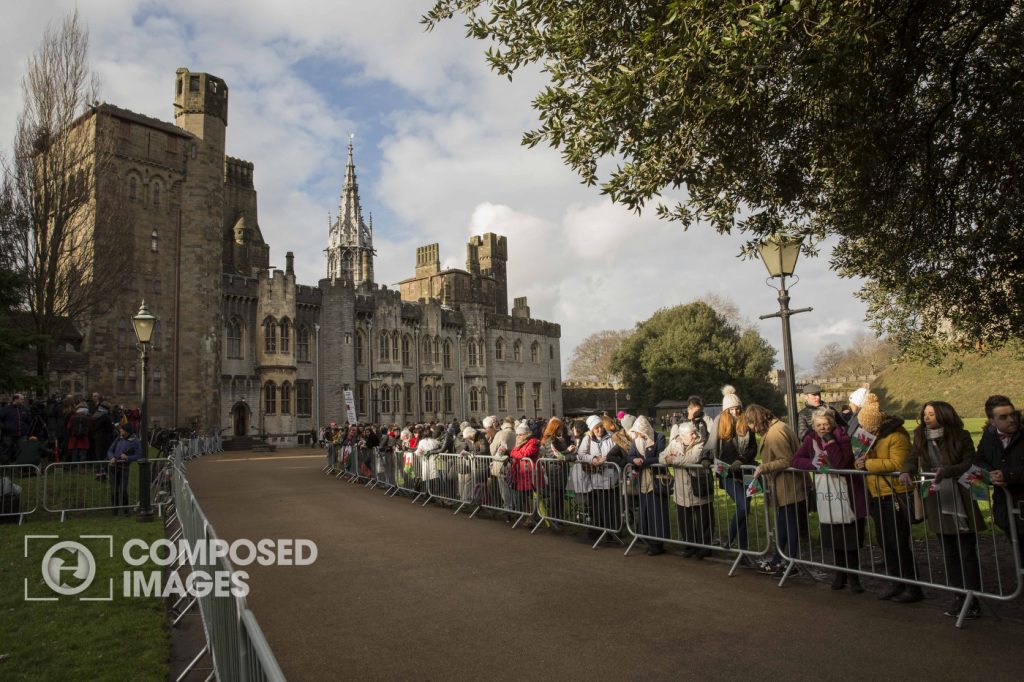 This was a bitingly cold but mercifully dry Thursday in the middle of January. Having arrived a few hours early, prepared for a lengthy wait, it wasn’t welcome news when overheard mumbling informed that the Royals’ train was delayed by an hour. This meant more aimless walking in an attempt to keep warm. The arrival would see a precious ten to fifteen minutes during which the couple would meet crowds before disappearing into the castle for a reception with the great and good of Wales. Local retailers of hot drinks must have done strong business. 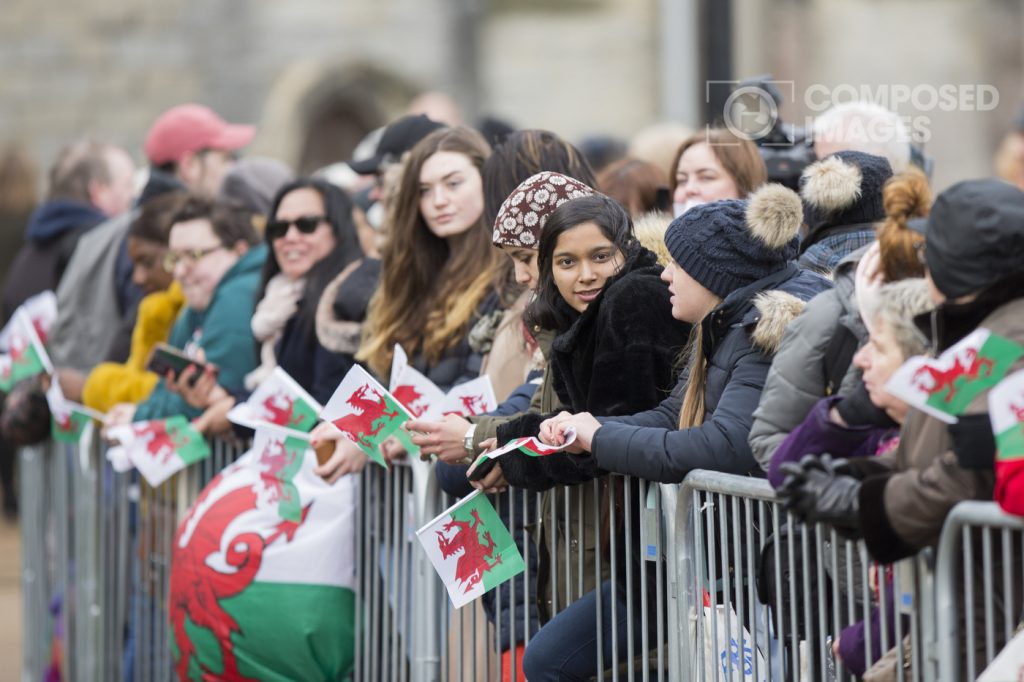 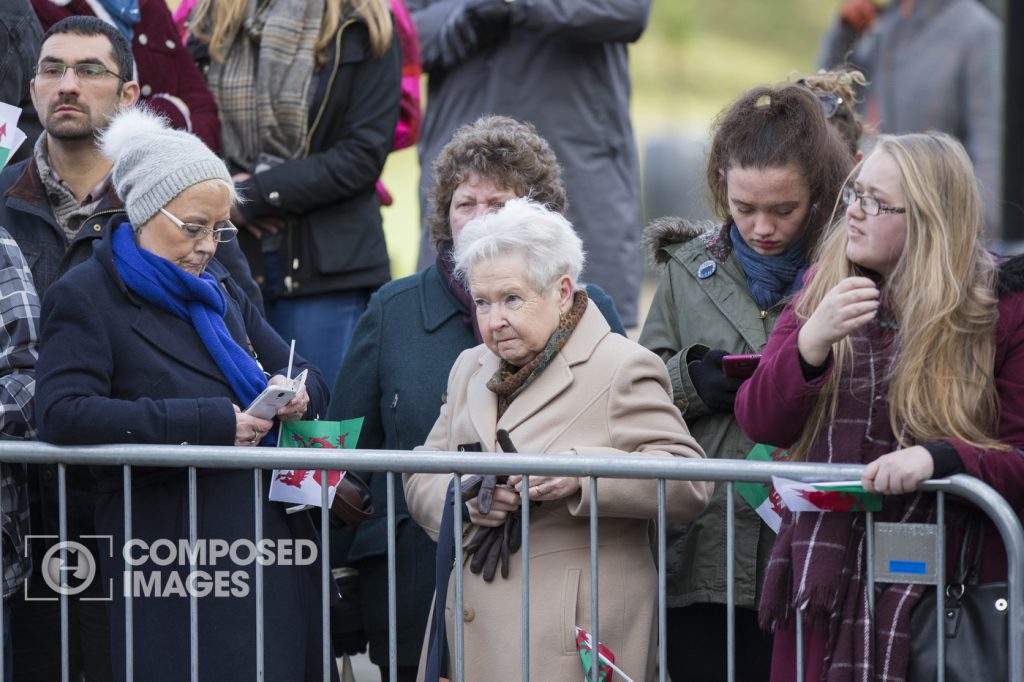 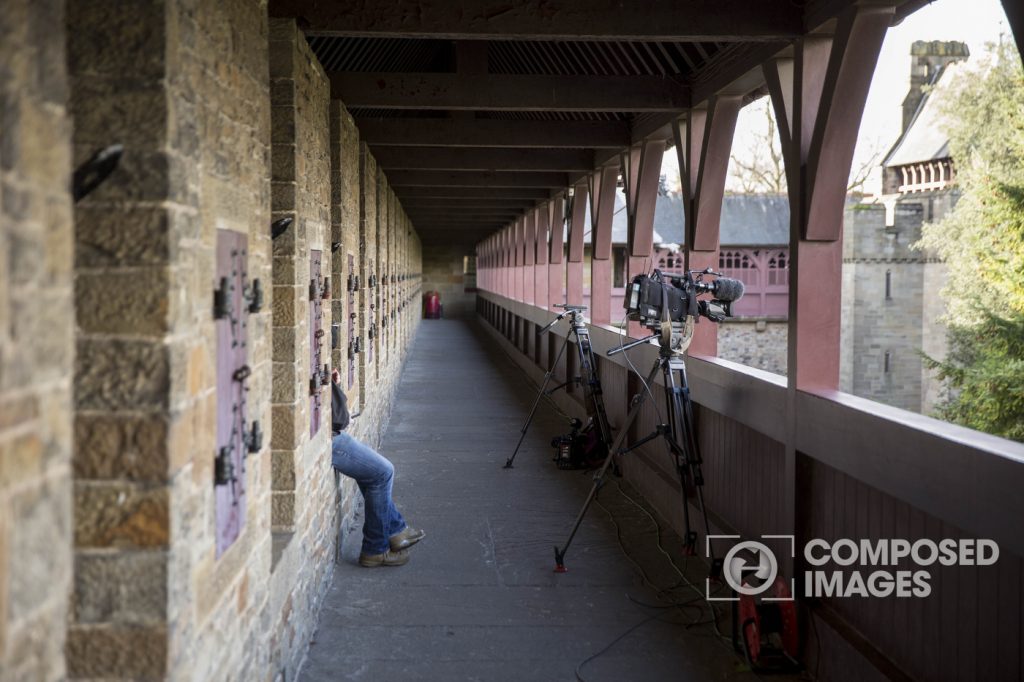 Eventually it reassembled at the point where the vehicle was expected. Everything seemed as if the arrival was imminent. Photographers shuffled along the steep mounds of turf overlooking the entrance, testing angles. There was a palpable uplift in nervous energy, slightly pointless questions asked about plans, strategies. I had vaguely formulated a four-point plan of attack, knowing you always have to be a little fluid and react to whatever’s happening.

After a testingly long wait, flag-waving intensified near the entrance, a sea of bobbing cameraphones were held aloft from the crowd together with excited high pitched cheers. Here they were. A Land Rover rolled into the Castle grounds and Prince Harry and Meghan Markle stepped out.

Camera shutters around me burst alive and began to hungrily feast on these global celebrities.  The couple met their first dignitaries, including the first minister of Wales, Mayor of Cardiff and a new leader of Cardiff Council. My angle of these was mostly blocked, but resulted in my best eye contact. 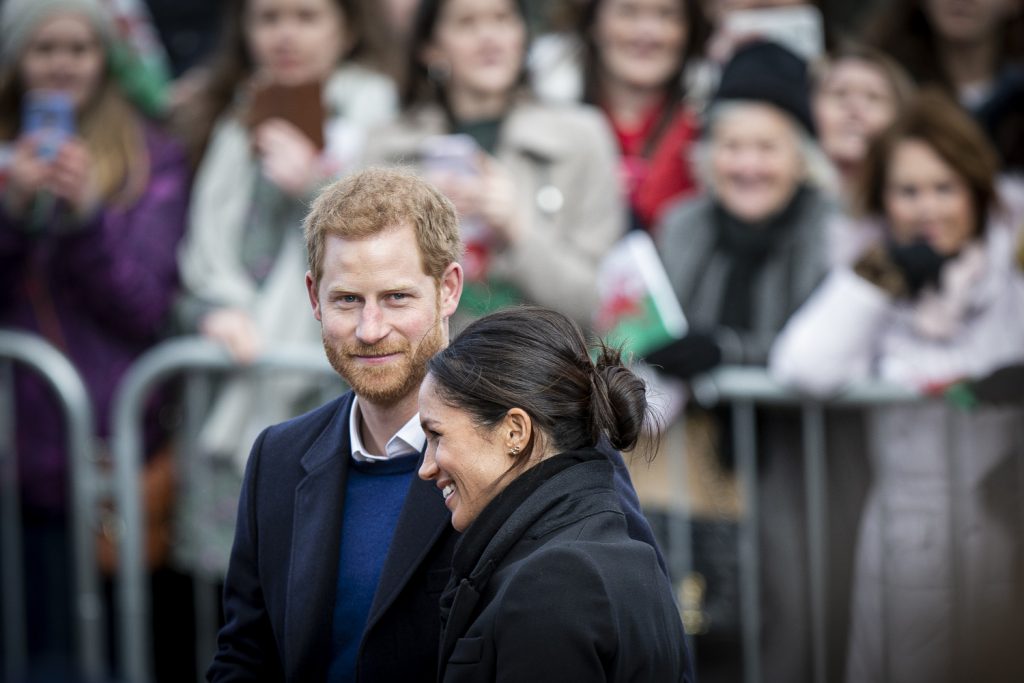 Then they greeted the crowds. I stayed on the second mound for a few moments before making my way towards a dedicated pen of excitedly chattering schoolchildren, to which the couple would doubtless be drawn. It was an obvious spot but apparently not too obvious. Only a couple of other snappers were there, although one was Getty’s own royal photographer and all round Instagram rockstar Chris Jackson. His wide-angle shot from this similar angle appeared in many newspapers the following day and magazines in the following week. 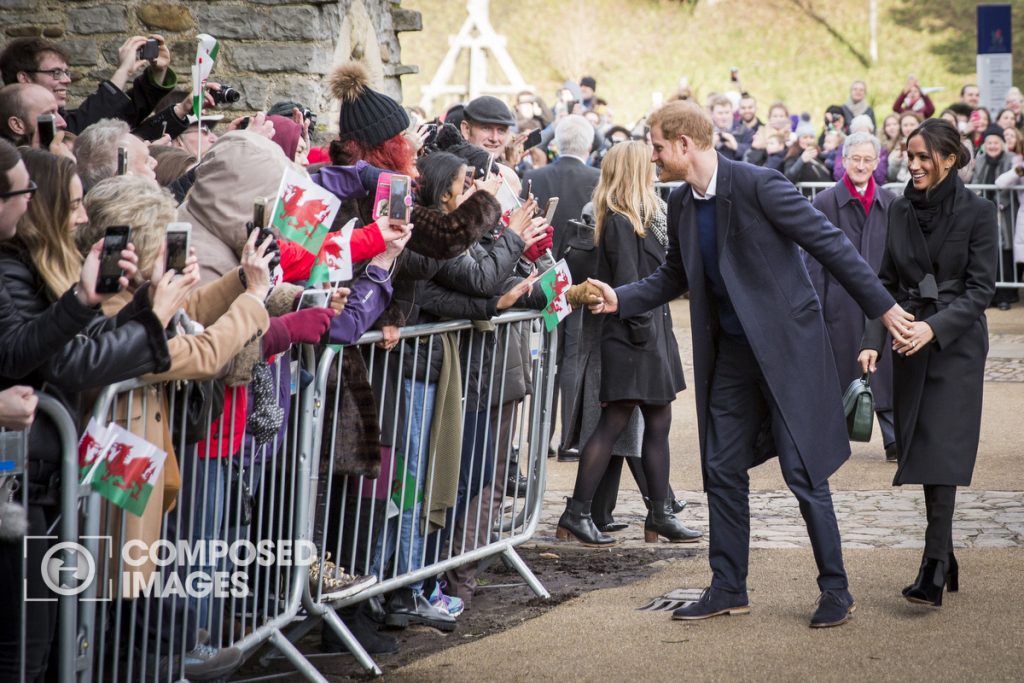 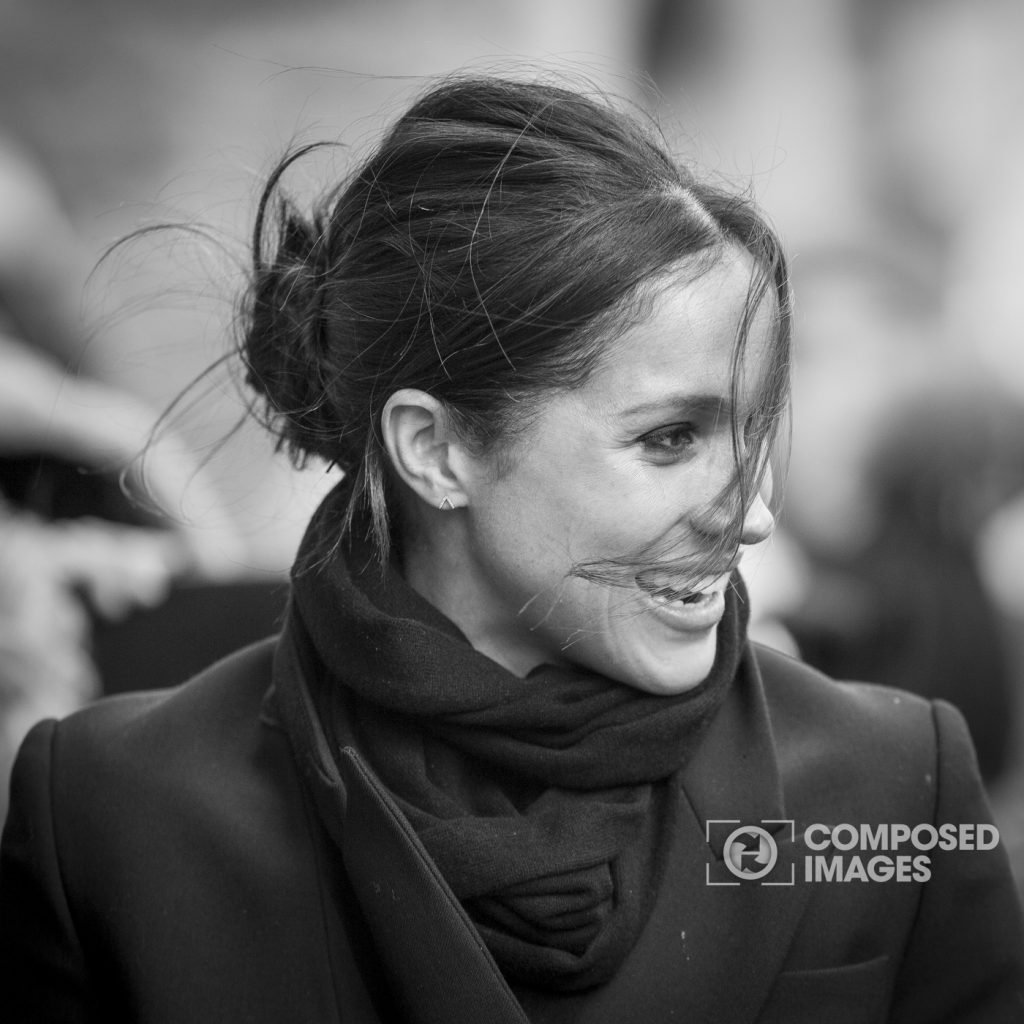 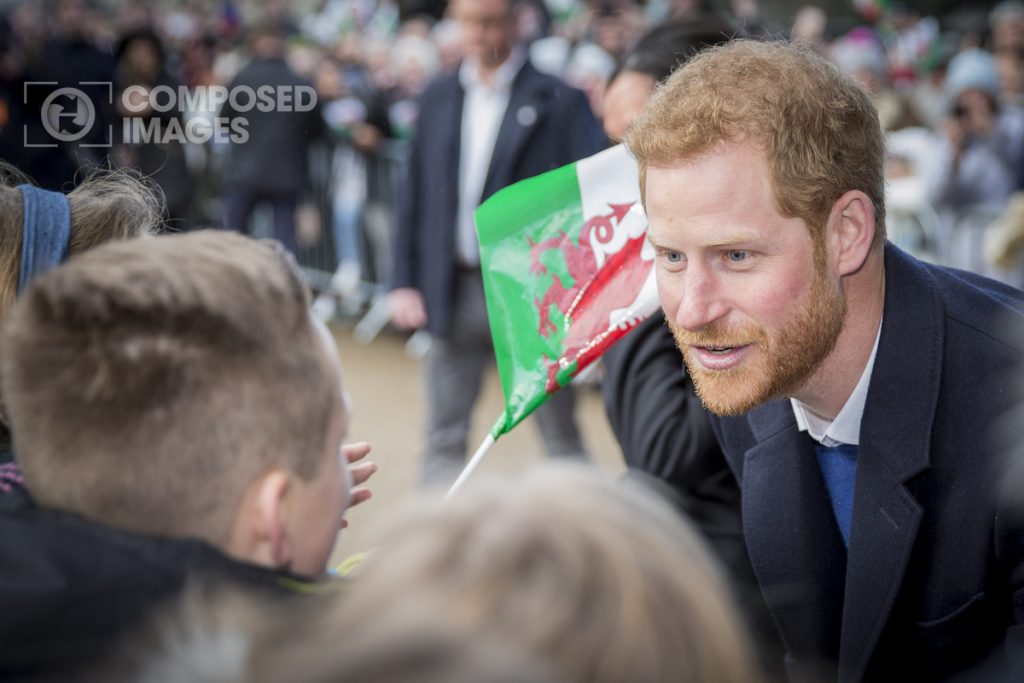 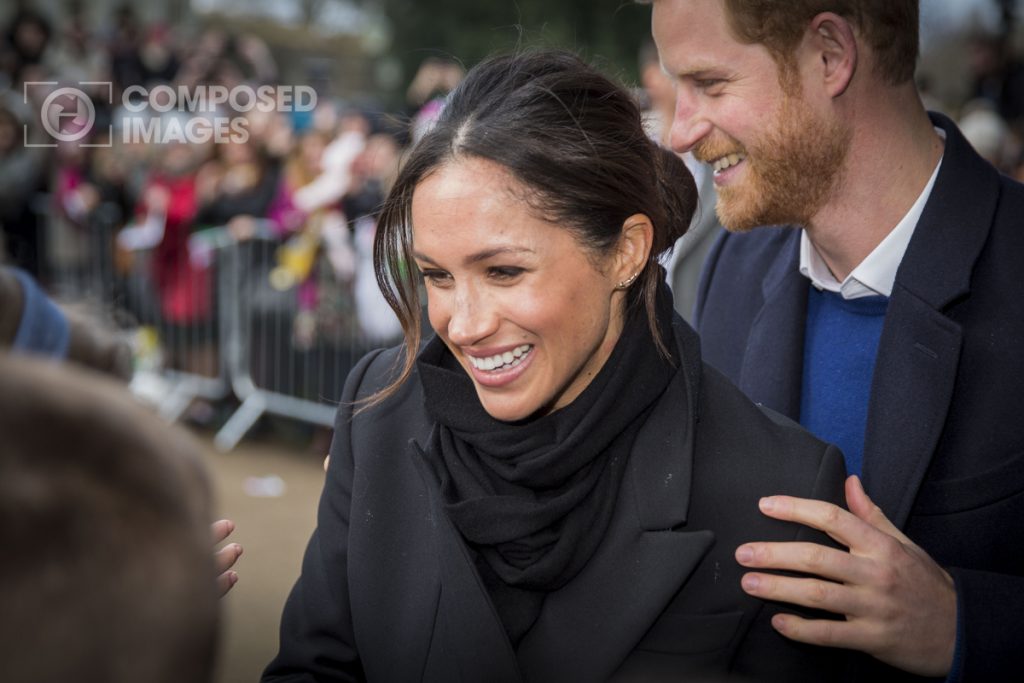 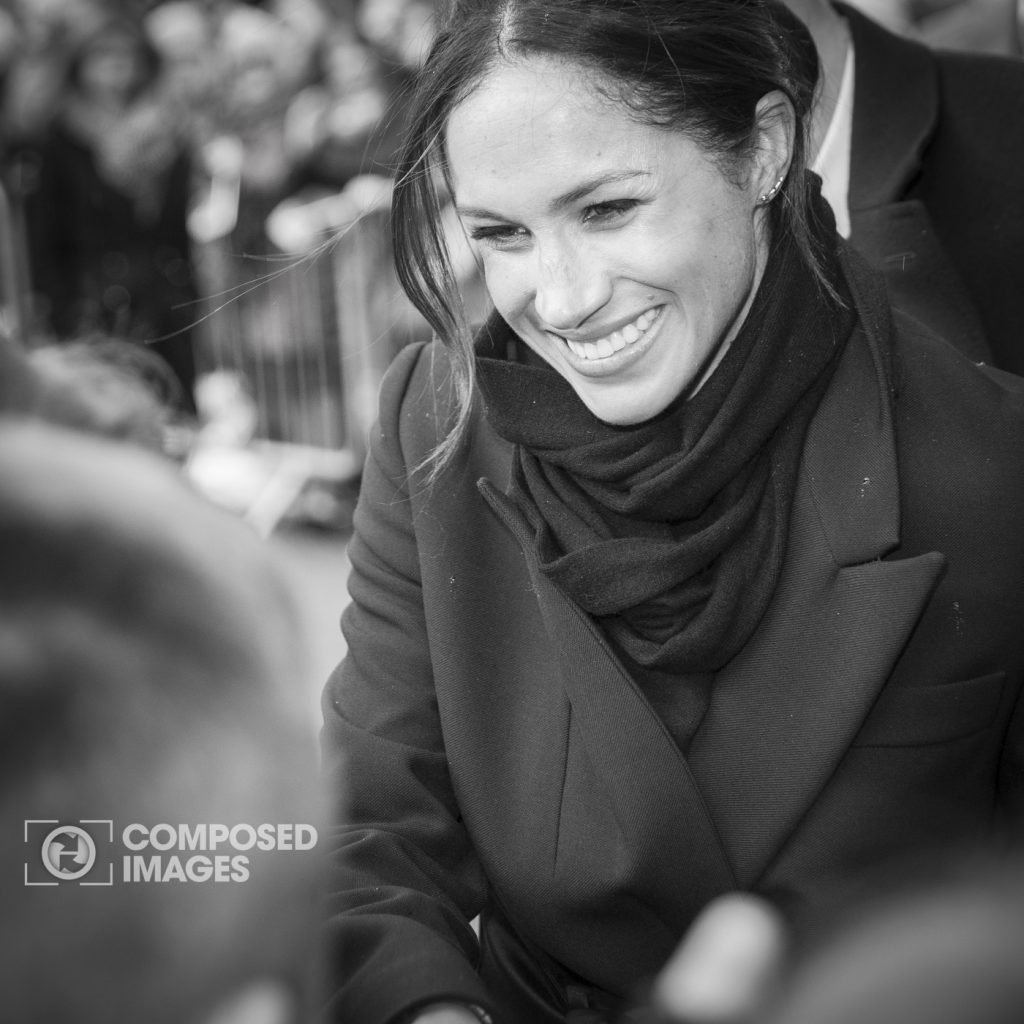 From there I hastily climbed a flight of steps to an overlooking gallery along the castle walls. A longer lens effort gave me a couple of nice frames of Meghan appearing to genuinely laugh with delight, presumably at something Prince Harry had said. Another wider angle was able to give greater context through the Castle’s keep, upon which the Welsh flag was flown. Prince Harry and Meghan are also just discernible below. 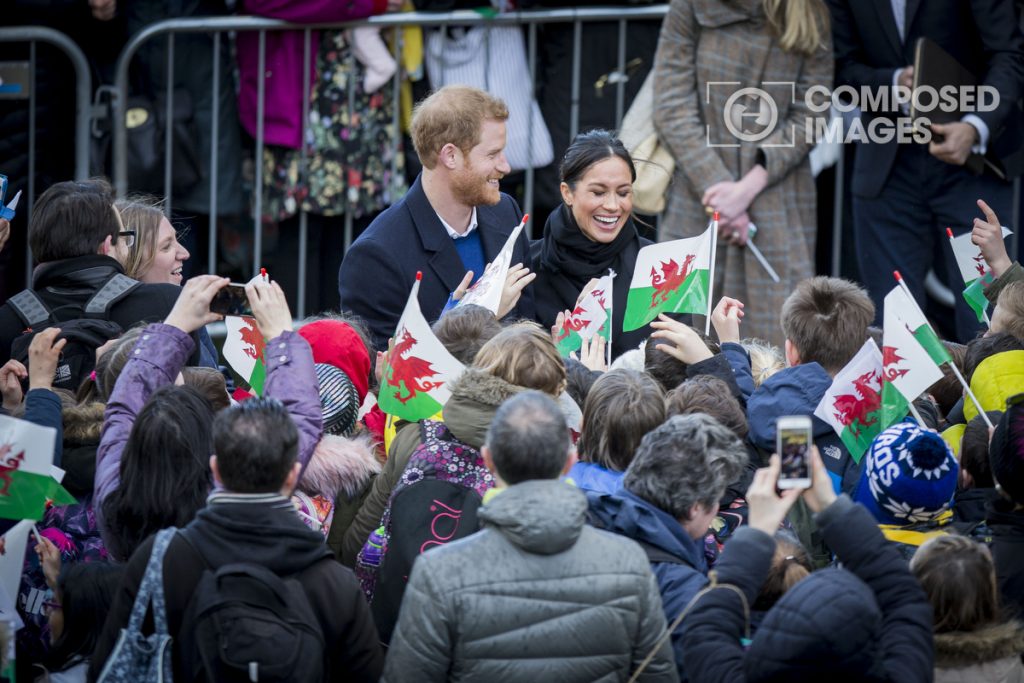 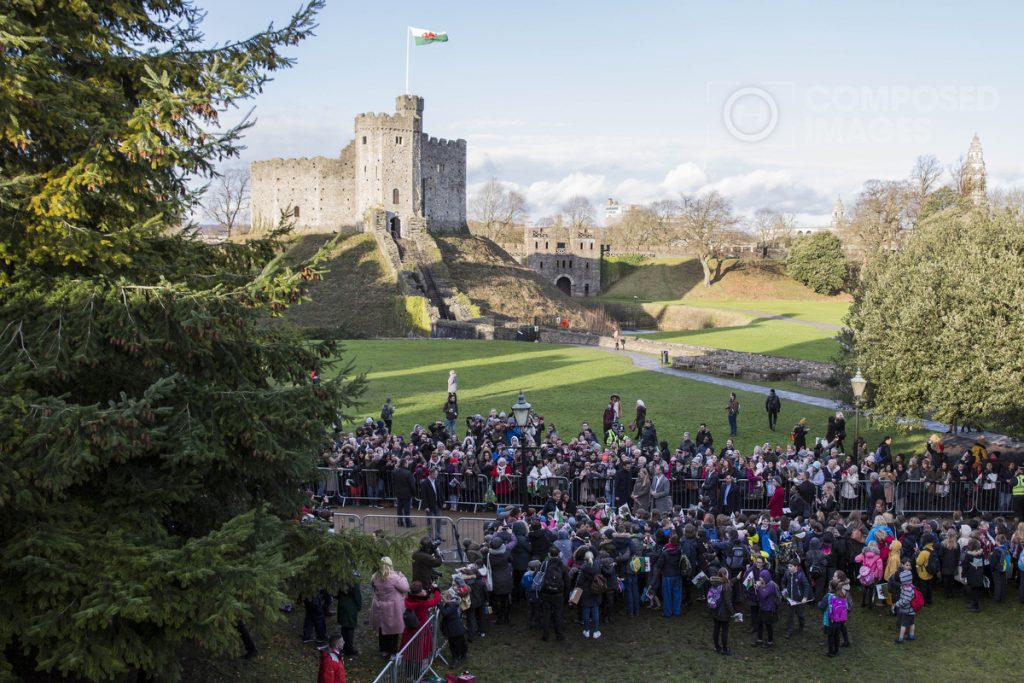 My final point was near the doorway to the castle. This was possibly the biggest bunfight as I wriggled my lens between the bodies of other photographers on stepladders, hoping for a clean, unobstructed shot. It was also made challenging by the broad security men surrounding Meghan, always aware of any potential threats or risks from the crowd, careless of the wants and needs of barking photographers. 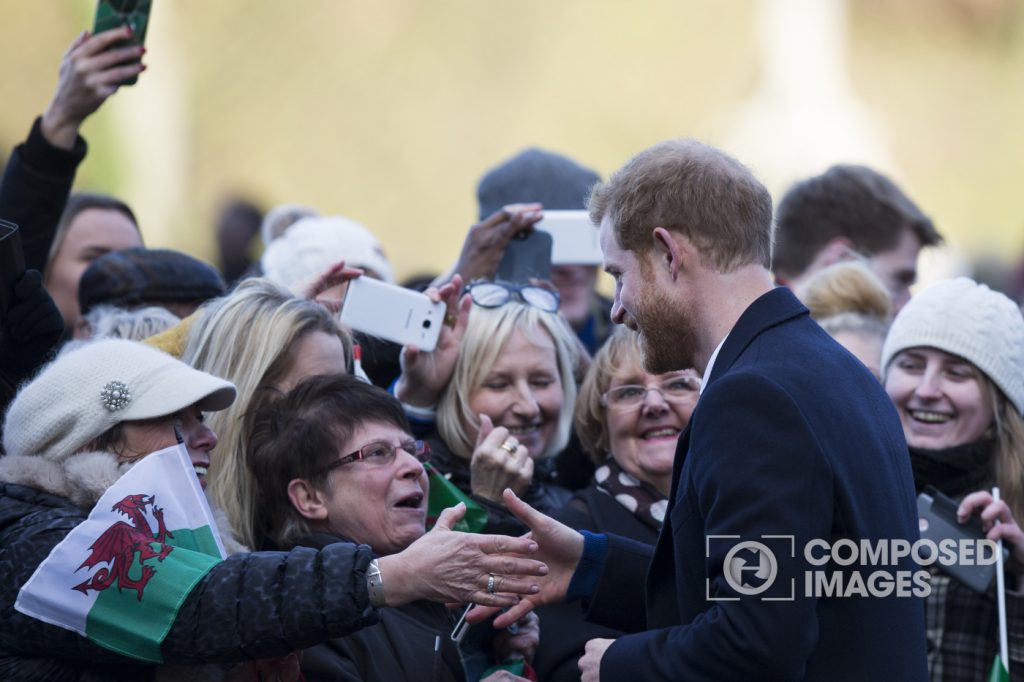 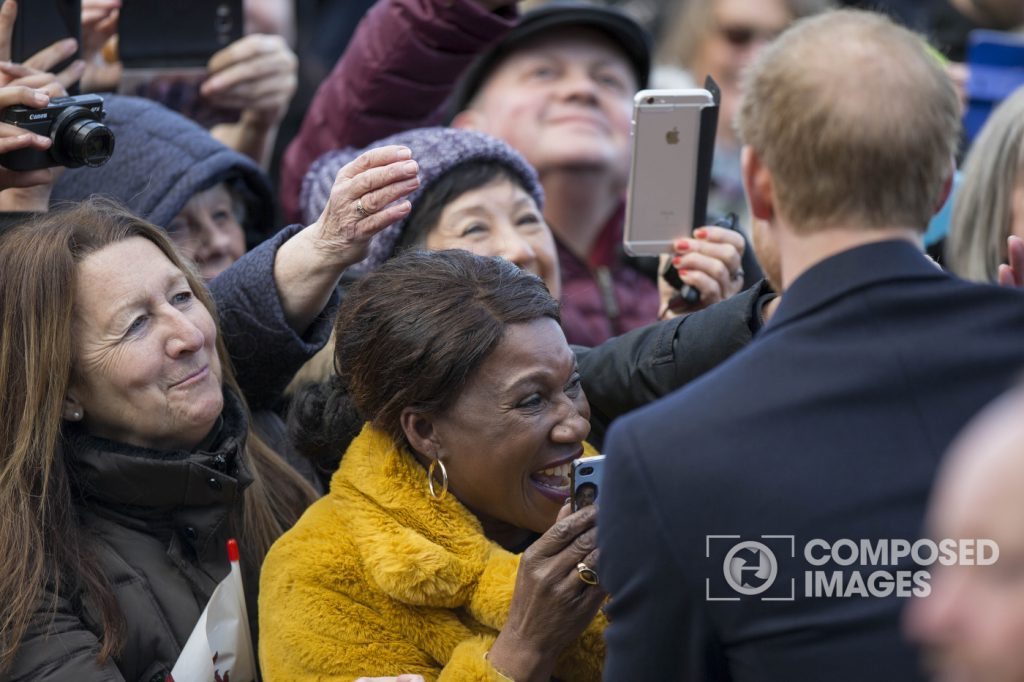 As soon as the couple disappeared inside the building, I was away. Heading for the warm sanctuary for a coffee shop, I scrolled through my cameras in search of the best dozen or so royal family photos from the hundred or so efforts. 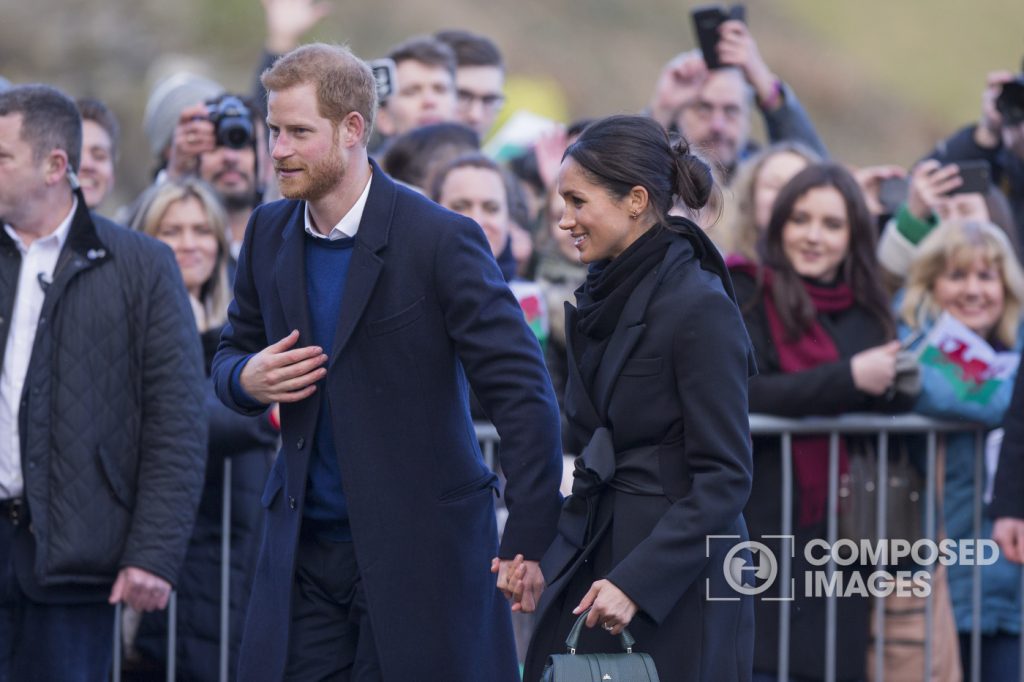 Over the next week or so I was mildly surprised my royal family photos yielded slightly more engagement than usual from my modest social media audience. It reminded me that the public’s royal frame of reference is unusually wide. They are a constant in many of our lives, however much we may or may not subscribe to the whole tabloid circus around them.

It sort of feels like we know them, especially if we are of their same generation; as Harry and William are, for me and my peers, and like Charles is to my parents’ generation. We all remember the childhood tragedy of William and Harry losing their mother. We can sense the frustrated and repressed existence of Prince Charles. As for Her Royal Highness, the compelling Netflix original series The Crown has recently given me greater insight into her life and times. (Before watching the series I thought myself largely indifferent to the Royal Family, but now I am fascinated by them. Or at least through the dramatised cipher of The Crown). However distant and removed we feel, we all share their lifetimes in some small way, invested in their past and their future. And their ability to give us public holidays.