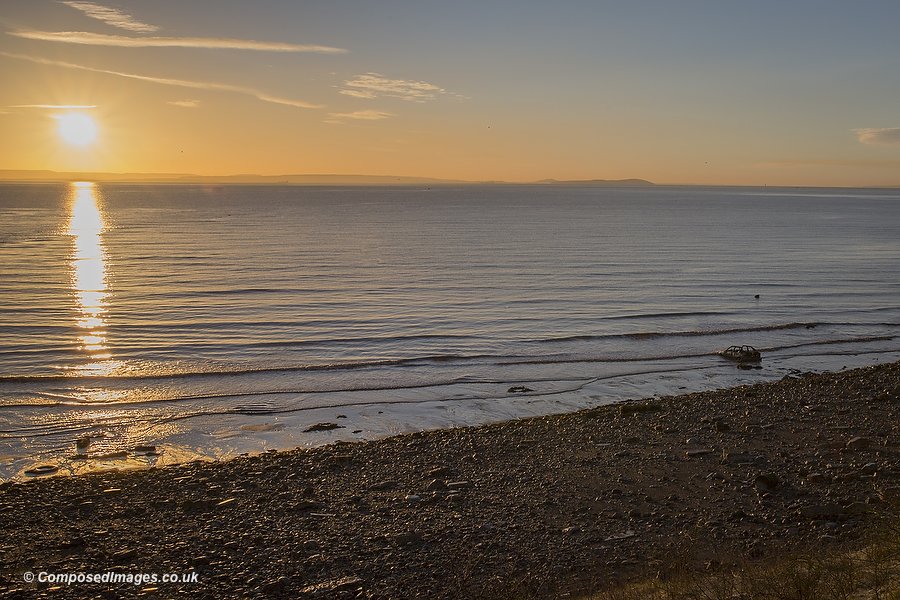 Early one beautifully still, freezing morning in the middle of January 2016, I went to explore the ruggedly enchanting Cardiff location of Rover Way.

It was around 6am and I could sense a special sunrise smouldering behind the blinds. For about ten minutes I tilted between trying to go back to sleep and getting up. It was still dark and everything outside seemed still, petrified, frozen rigid.

Before that week winter had been grey and wet, only cold through relentless British dankness. During those few days we’d seen the first real frosts, a bitter crispness in the air and a settled spell of clear cold weather. It was refreshing and invigorating to feel a proper wintry chill.

I twisted out of bed, tried not to wake her, stretched, brushed teeth, went to defrost the car.

At a similar time last year I took an early morning hike up Pen y Fan in the Brecon Beacons, the highest peak in south Wales. But I’d been sensing its popularity grow at an off-putting rate. There’s more online noise and a swell of beautiful, painstakingly stitched together HDR images, wonderful timelapse videos. I half imagine the pitch-black car park at 5.30am in the morning, packed with lens people. I don’t find this appealing.

Over the last year I had been intrigued by the drive along Rover Way, leaving Cardiff to the east. A nearby bridge had been closed for over 12 months, making Rover Way our quickest route to the motorway. This route snakes you around Tremorfa Industrial Estate, power stations, steelworks and waterworks – all with a mysterious mechanical charm. 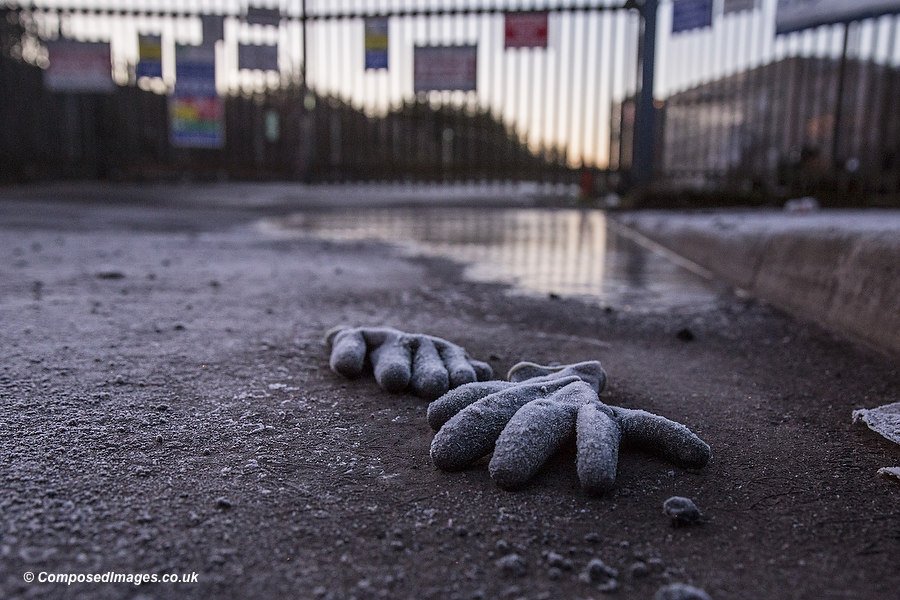 Further along Rover Way is a gypsy and traveller settlement. Tethered horses and ponies graze alongside the road. Then comes a large Tesco supermarket on the left before you’re ultimately spat out over a link road to join the main A48 dual carriageway.

On this morning I decided to shun the majestic natural beauty of a golden sunrise over the snowcapped Brecon mountains. This wintry sunrise I would go explore an industrial estate and gypsy campsite and whatever else was in that area.

Perhaps they work through the night, but I was surprised by the level of activity and noise as I arrived near the industrial sites. Cranes and forklifts and machines suspended to factory roofs, pincering steel and depositing it. The angles and lines appealed to the eye, but would probably be better captured at sunset than sunrise. 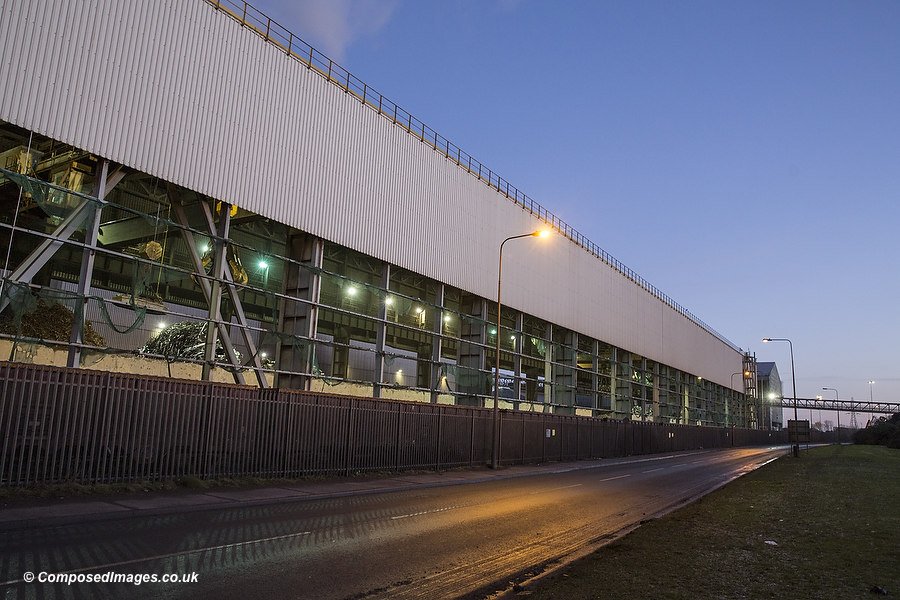 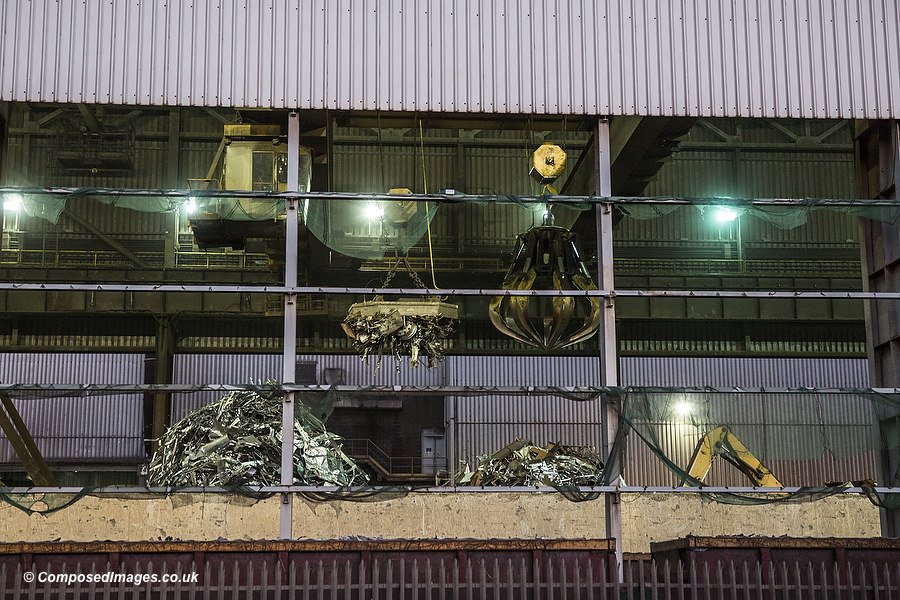 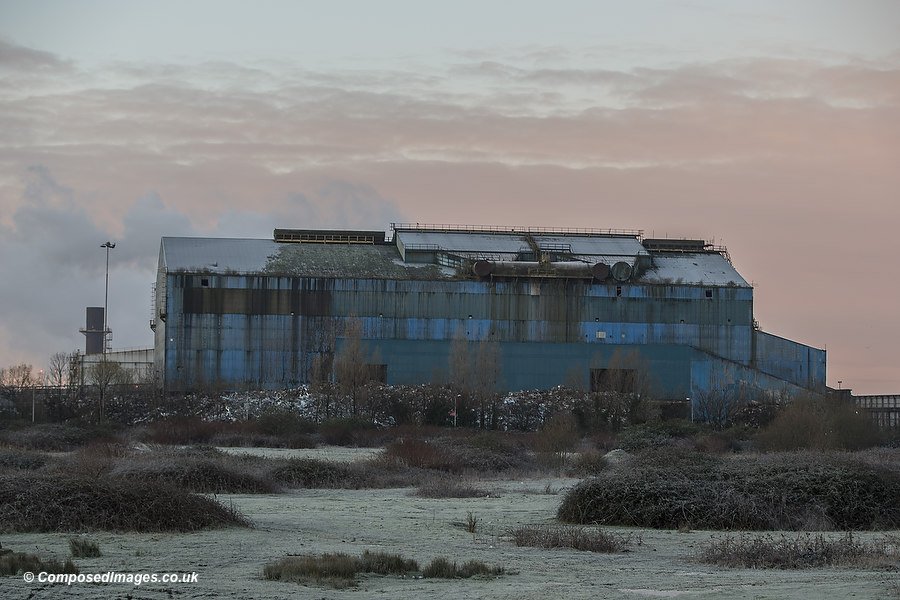 On I walked towards the gypsy site on the opposite side of the road, a large raised level of flat land which seems ripe for development. There was an even higher raised stump of a hill opposite, but it was difficult to tell if it was private property. 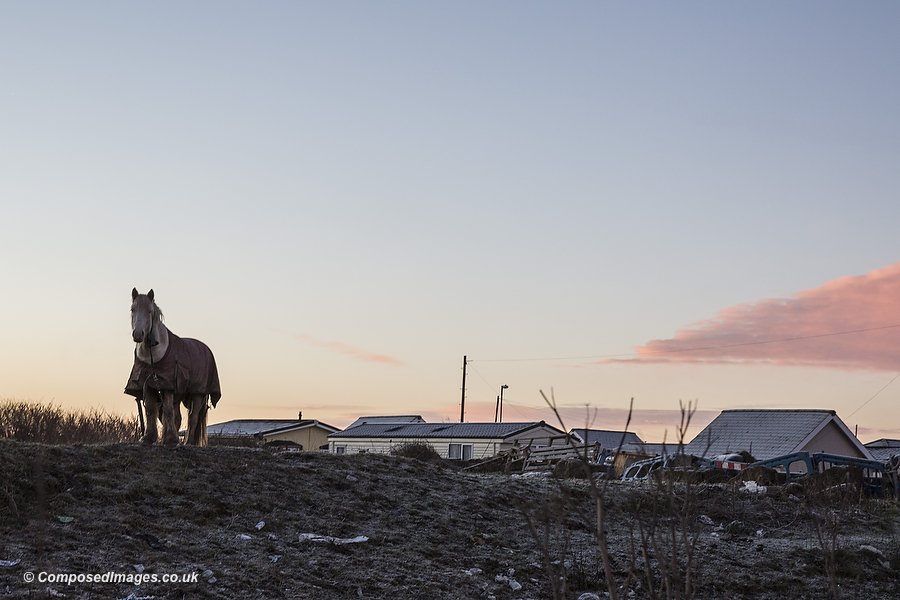 Nearing the gypsy site I came across a large amount of frost-encrusted waste: mattresses, toys, hoovers, a flimsy looking caravan door. Frost flattered it with a certain romance.

As the sun began to creep up, I returned to an earlier position where I was able to frame one of the horses together with the big yellow ball through the trees.

The horse obligingly turned, as if to ponder the sunrise itself and the dawning of another day. 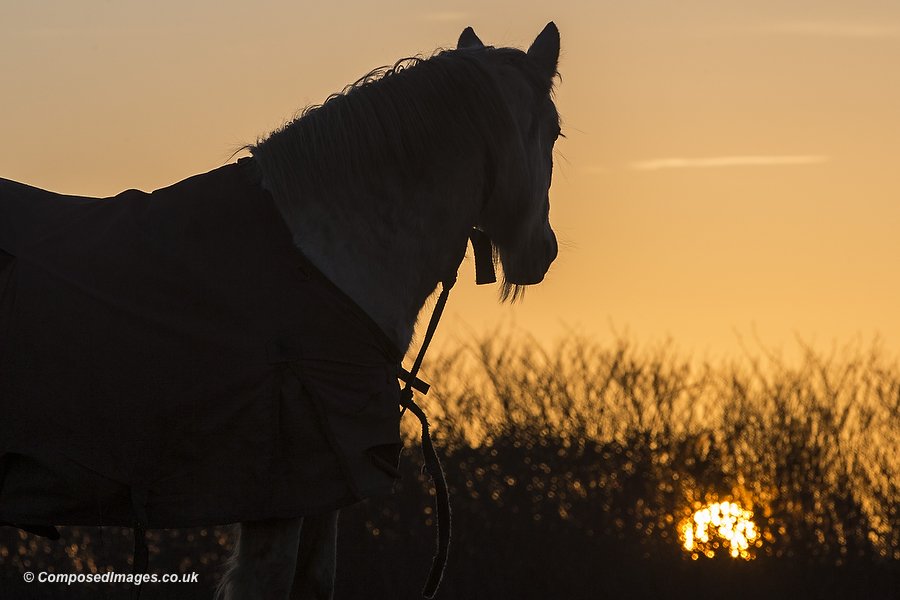 Retracing my steps back up Rover Way, that steeper stump of hill, the highest point for a small distance, again piqued my interest. I crossed the road and found a gap between boulders which allowed access to the mound. There were no Keep Out signs, fences or barbed wire. It was all publicly accessible, though perhaps not regularly used.

Now I experienced a building sense of schoolboy style discovery. Some place new to me, faintly magical on a beautifully woozy golden morning when I felt alone in the world. None of that mainstream Pen y Fan nonsense. 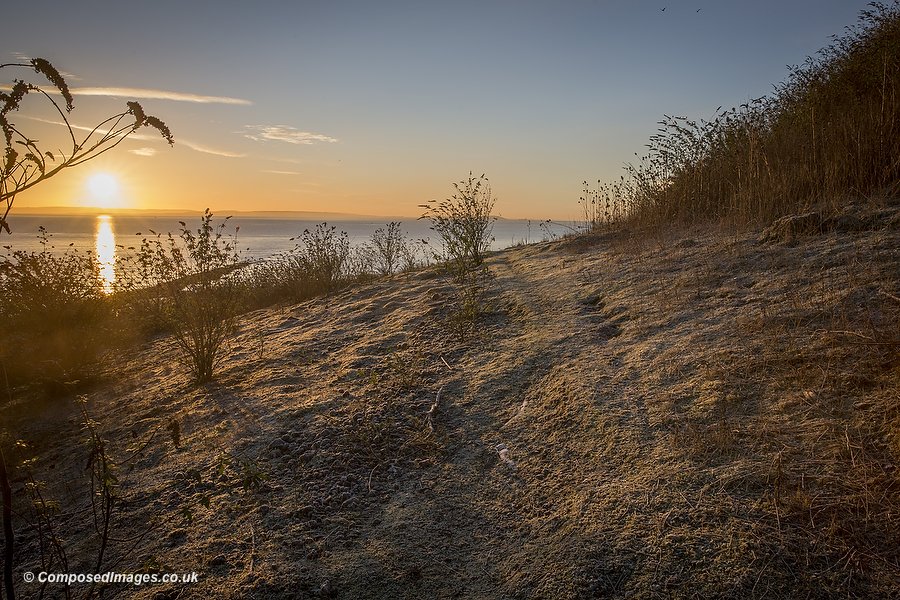 Further along Rover Way, land and water unprettily smash together as the Rhymney River blends with craggy mudflats. So I was gladdened and quietly stunned here, to see such an expanse of water in the opposite direction. The estuary was more ocean-like than I had anticipated. It was embalmed in golden light as sunshine smeared itself across the water. Boats puttered about in the distance and the opposite English shores of Clevedon and Weston Super Mare were just about discernible through the haze.

An uninviting rocky beach then presented itself, strewn with more litter and miscellaneous objects.  Some of these were possibly from industrial sites and some from the gypsy site.

Most remarkable was the burnt out shell of a car insolently slouched in the shallows, jaggedly disrupting all the perfect horizontal lines. It accepted the lapping tide, intermittently glinting.

In terms of the irresponsible selfish waste, the pollution and toxicity, this abandoned burnt-out car was reprehensible. It was also wonderfully cinematic, a dramatic visual clash of nature-made and man-made, a future glimpse of a post-apocalyptic world, the final scene of a movie. 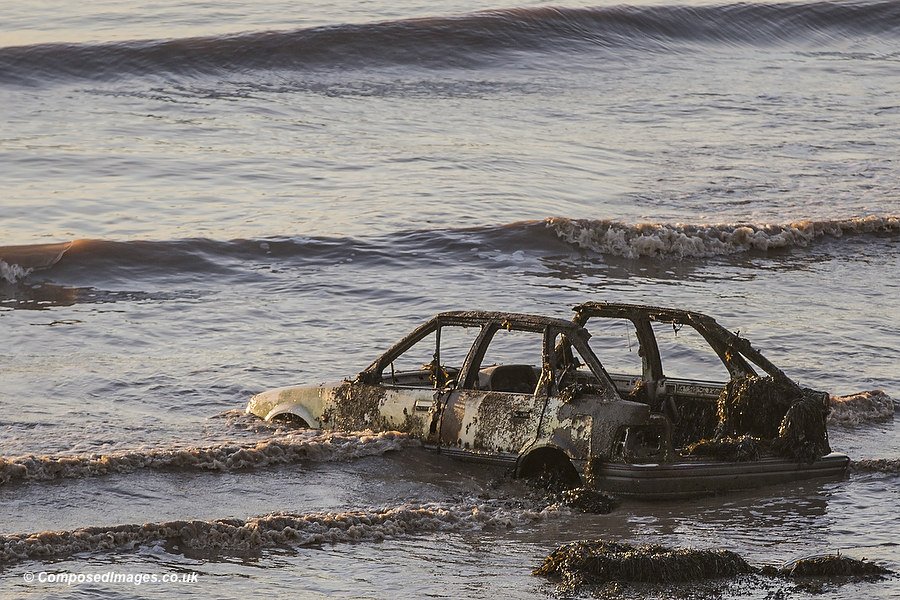 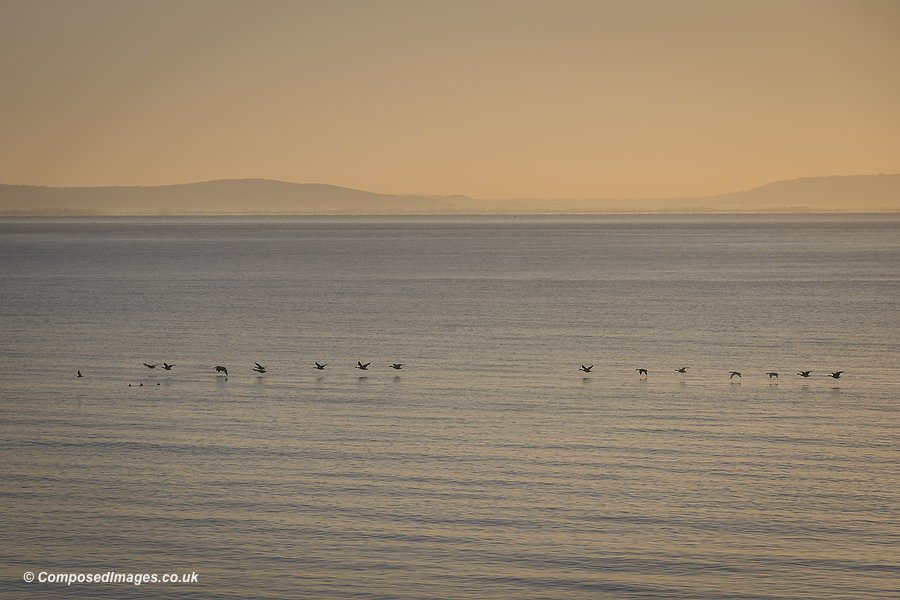 Please get in touch if you’d like to commission photography work of a specific location, near or far.