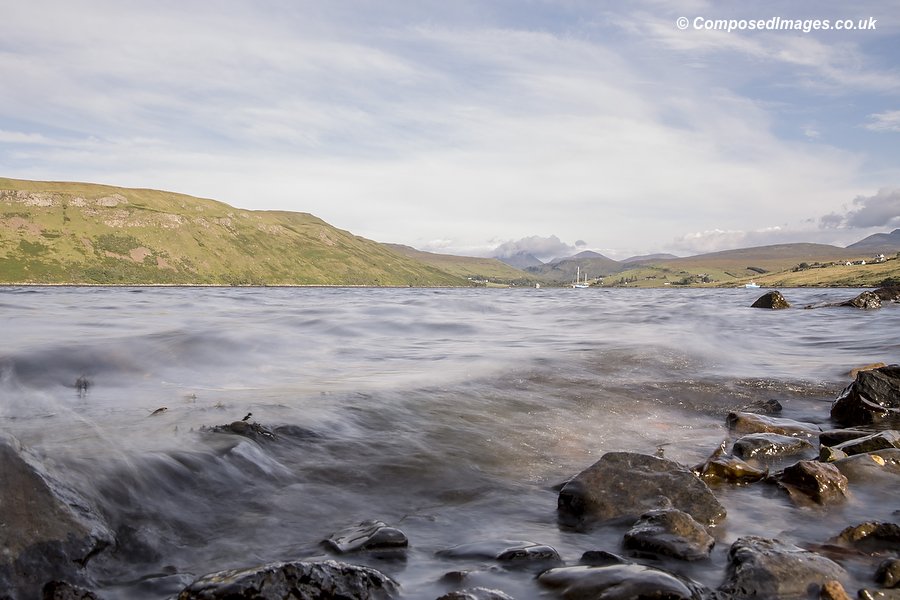 The Isle of Skye is an astonishingly beautiful place. After taking the swooping humped bridge connected to mainland Scotland’s northwest coast, you can be stunned in nearly every direction you turn; every long winding corner you arc around, every horizon you climb towards. When you travel around Skye, you’re presented with countless incredible vistas, many of them capable of squeezing out startling moments of literally breathtaken awe.

Back in 2008 I took a road trip around Scotland and very briefly set foot on the island, vowing to one day return. In the middle of September this year I was lucky enough to do just that, spending a little under a week exploring the island.

Unlike my previous trip, this time we took a more direct route from Glasgow, although it was still the best part of a five hour drive. We travelled north alongside Loch Lomond and it was incredibly scenic much sooner than expected, and it only improved. By the Glencoe region I was itching to get out, and couldn’t resist stopping to photograph a mountain range. 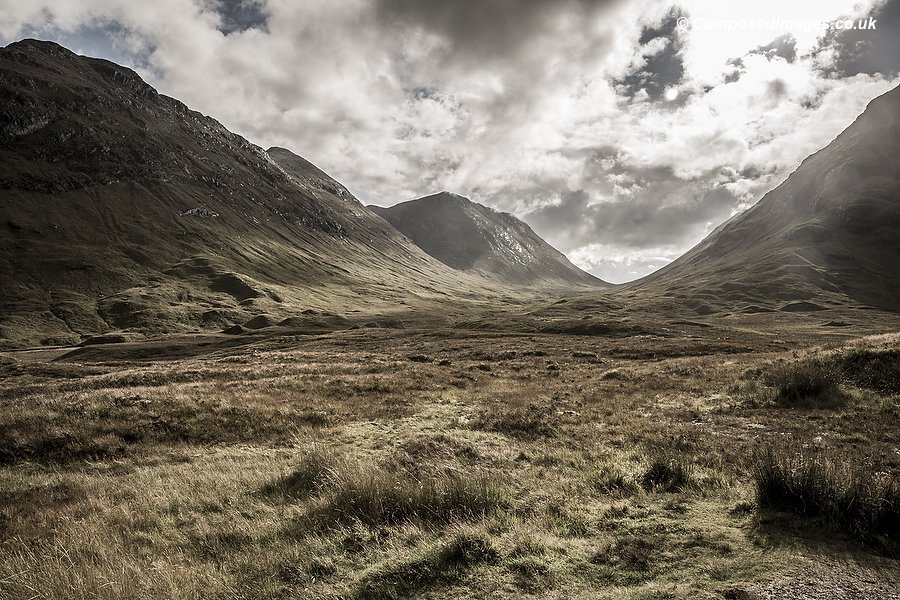 The stretch is a popular one, tourist coaches spraying out humans of various nationalities onto the side of the road to do just what I was doing. Ours was the only vehicle in the layby for a disappointingly short time before a larger one stopped. 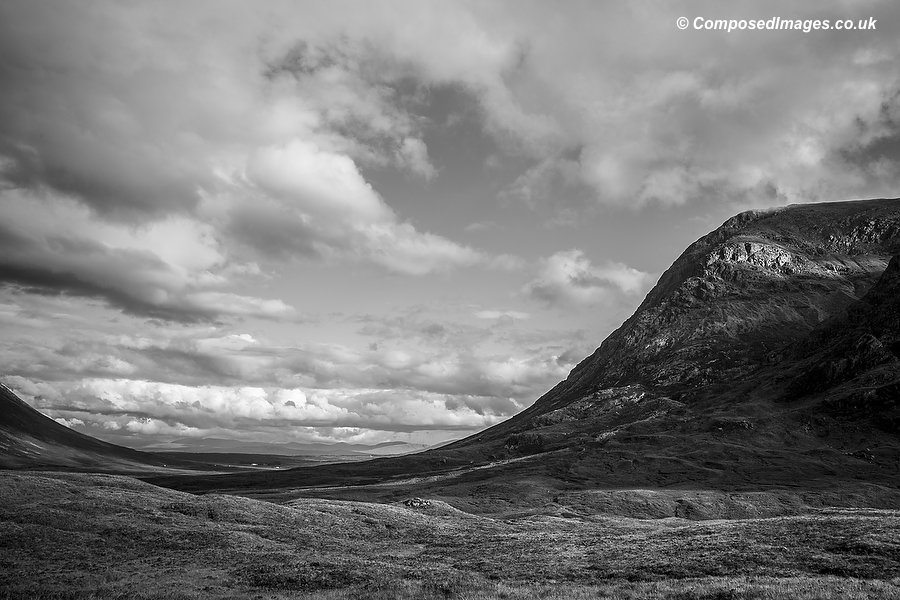 Soon after we began to itch more literally, needing to fend off an army of particularly persistent and vicious midgies that had comprehensively invaded the car. We continued on our away again, but the battle continued for some time.

We were staying in a small place named Satran, close to Carbost on the mid-Western side of Skye. Carbost is a small village of several amenities: a shop, B&B, pub and bunkhouse, and perhaps most notably the Talisker Distillery – a major employer for the area. 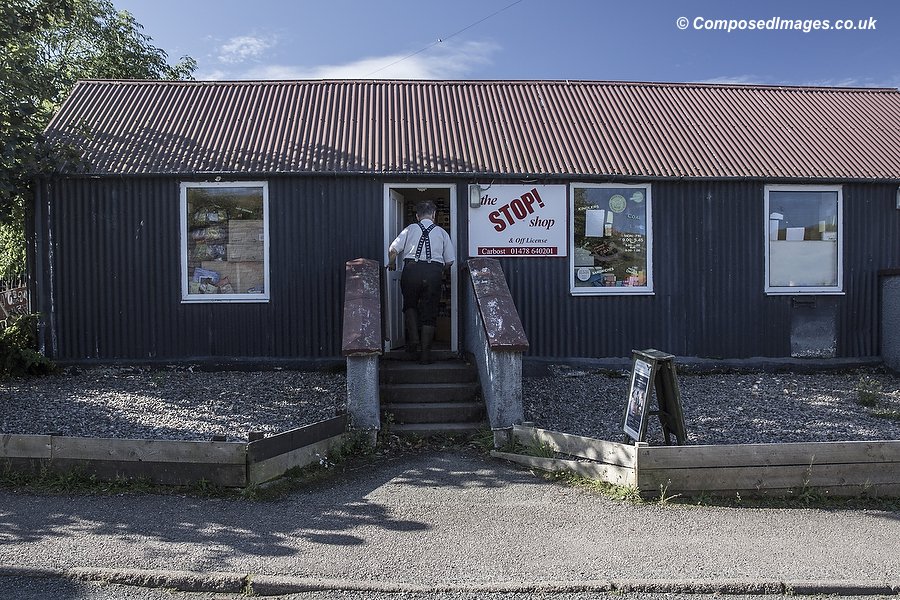 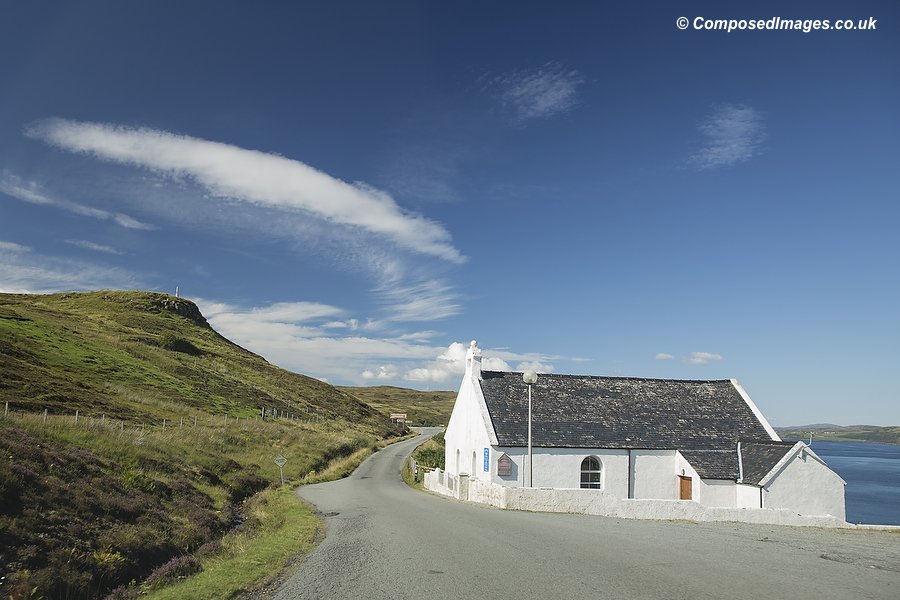 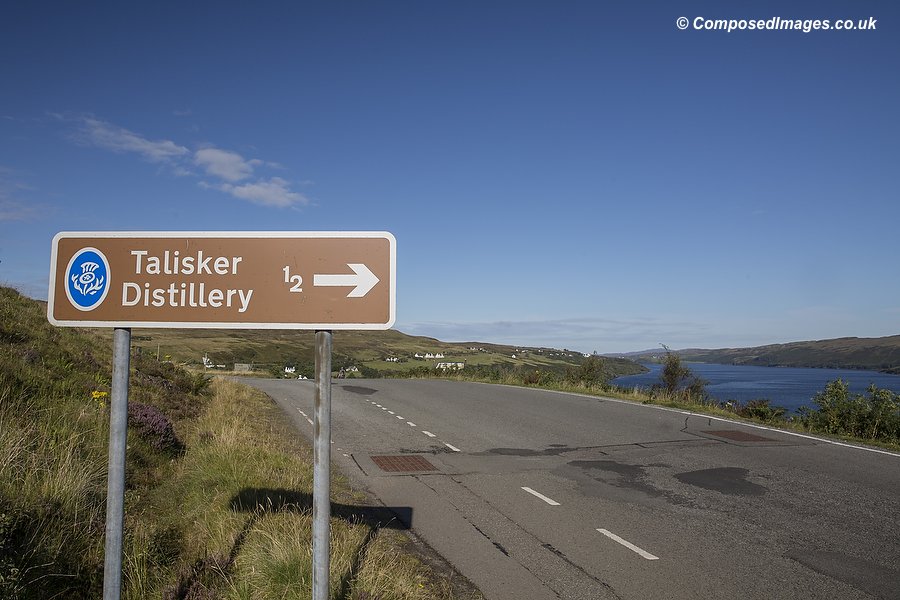 We enjoyed a tasting tour the following day. It cost £35 each, as opposed to the standard tour of £8. 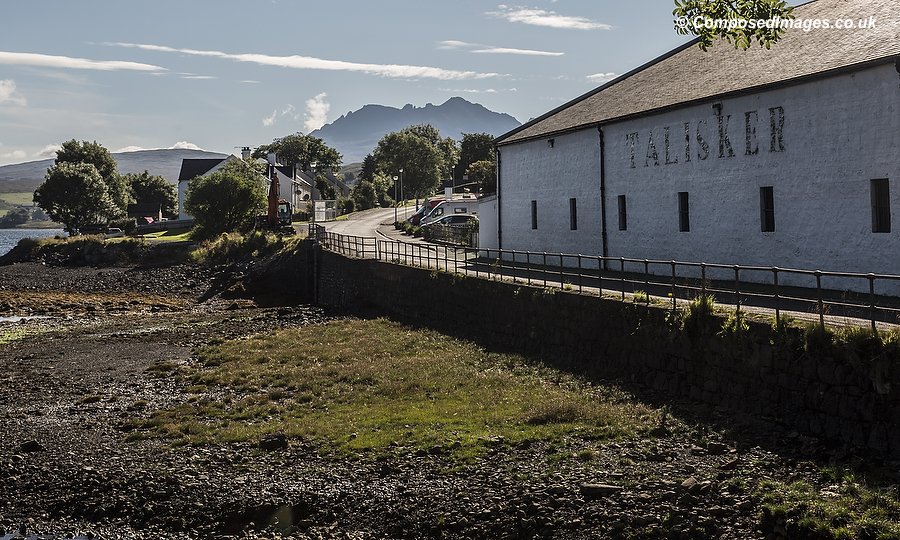 There’s so much subtle, multi-staged chemistry involved in the process of whisky-making that I felt it was virtually impossible for me to glean much meaningful understanding.  A couple of morsels of information, but that was about it. It wasn’t helped by it not being our guide’s best ever day, as she was just recovering from a cold. The tasting part was enjoyable all the same, and maybe the reason she came into work.

The Old Inn is Carbost’s loch-side pub, a Skye tourist magnet for those based in the area. It has a great range of local ales and astonishingly good carrot cake. That was our first port of call after the distillery.

Carbost, Satran and its adjacent Loch Harport all offer stunning views of the Cuillins – a jagged set of peaks that loom in all directions. At our holiday cottage, we found a number of books which told of the folk tales, mysteries and legends surrounding the island. It’s not difficult to see how these stories emerged, especially in times demanding greater imagination.

Carbost is also home to the characterful Oyster Shed. An independently run local seafood takeaway, the Oyster Shed can be found a short distance up the hill behind the Talisker Distillery. There’s  a range of local food products available to buy – not just seafood, as well as diverting historical museum pieces and a small eating area. 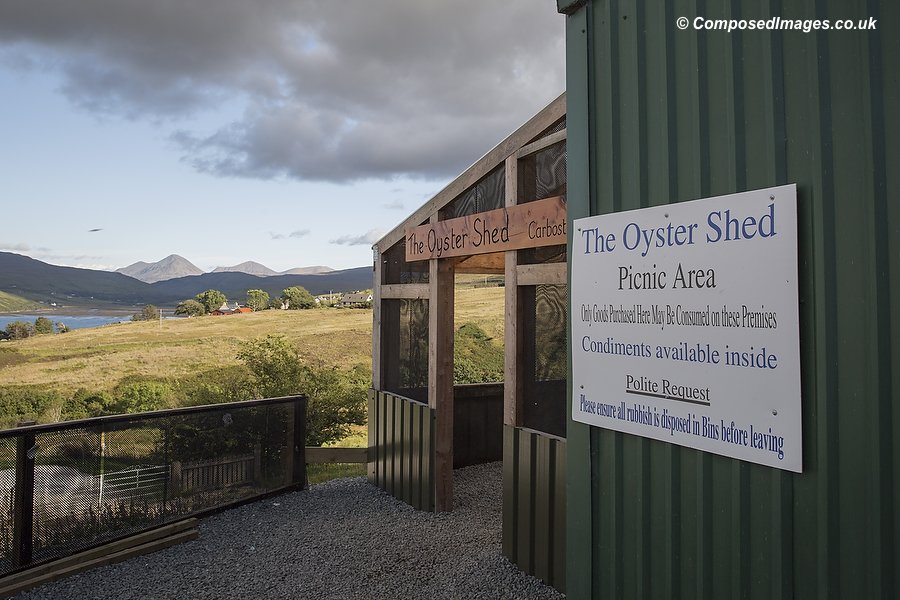 We had two mixed platters of seafood – which were mainly mussels, as well as a nice slab of salmon, some tricky to crack open crab and some mop roll herrings. It came to about £14. Sadly, we only later realised that there were no oysters in it. We came away from the apparently world-renowned Oyster Shed without any oysters.

When the sun began to set at the end of our first full day on the island, we chased it, resting at a layby affording great views as the sky exploded into colour. 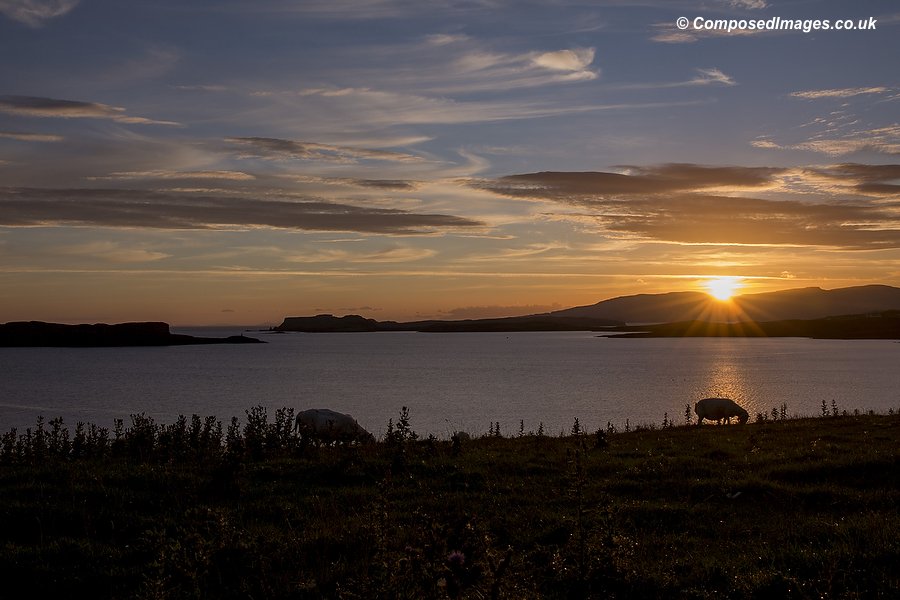 Flowering purples reflected in the tarmac of the road in an especially pleasing way here. 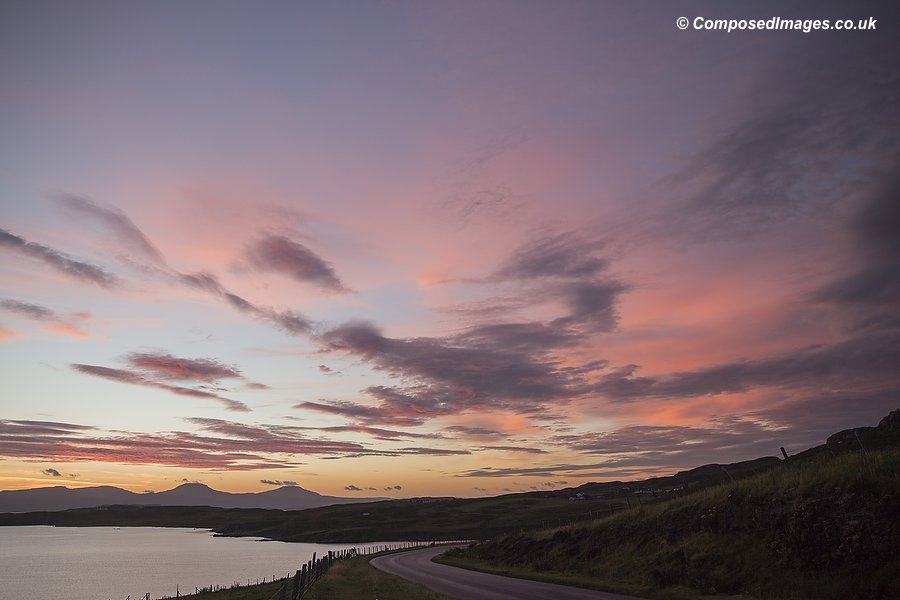 The weather turned on us the next day, and the shuffle system on my iPhone was in jovial mood. 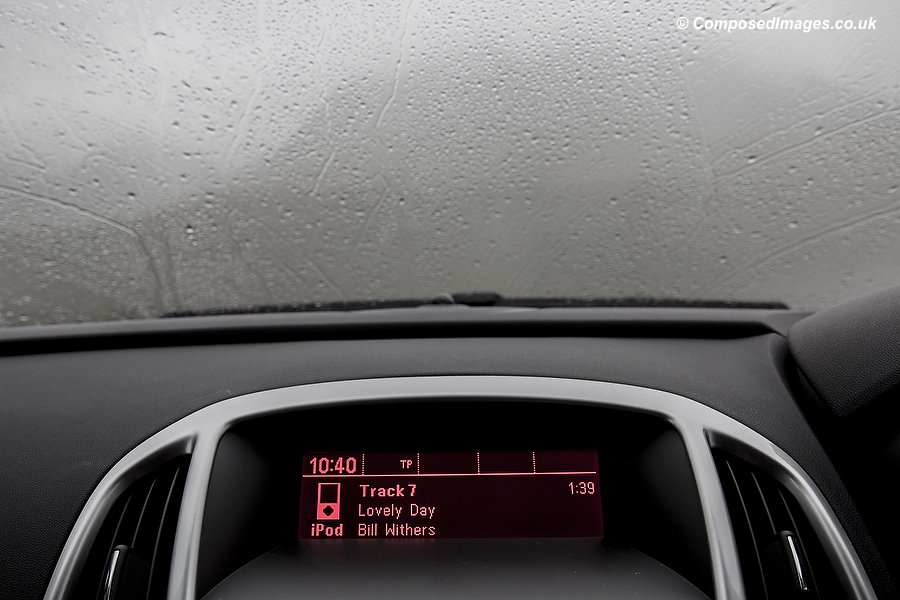 Wet conditions didn’t stop us venturing a short distance to south westerly Isle of Skye and Glenbrittle’s ‘Fairy Pools’. This is a twisting stretch of river and waterfalls and pools running along the base of the Cuillins. We didn’t see any fairies at all, and I remain sceptical of their existence. Unless they cross breed with the midgies.

It was good to get a different, more real feeling sense of the rugged land; a land that was unforgiving and bleak and strangely invigorating. The weather was so unremittingly wet, I chose to just take the iPhone rather than a camera.

This was intensified by our next climb near Culnamean.  We parked at the beach just outside the campsite, and over a couple of hours climbed several hundred feet of steep track, finding a small but beautifully formed loch at an improbably high point.

Magically bleak #loch a few hundred feet up a mountain of the Cuillins in #Skye last week. Resisted a curious urge to dive right into it. The descent could’ve been chilly if I had. #Scotland #VisitScotland #travel #iphoneography #bw A photo posted by Mark Hawkins (@markonthelens) on Sep 22, 2015 at 1:24pm PDT

The place entirely still and serene, almost designed for black and white. This serenity, together with a sense of victory at reaching our highest point, gave me the curious urge to dive head first into the loch. I resisted it.

In the next Isle of Skye photoblog post we head north: Portree, Uig, Staffin and the epic Old Man of Storr.