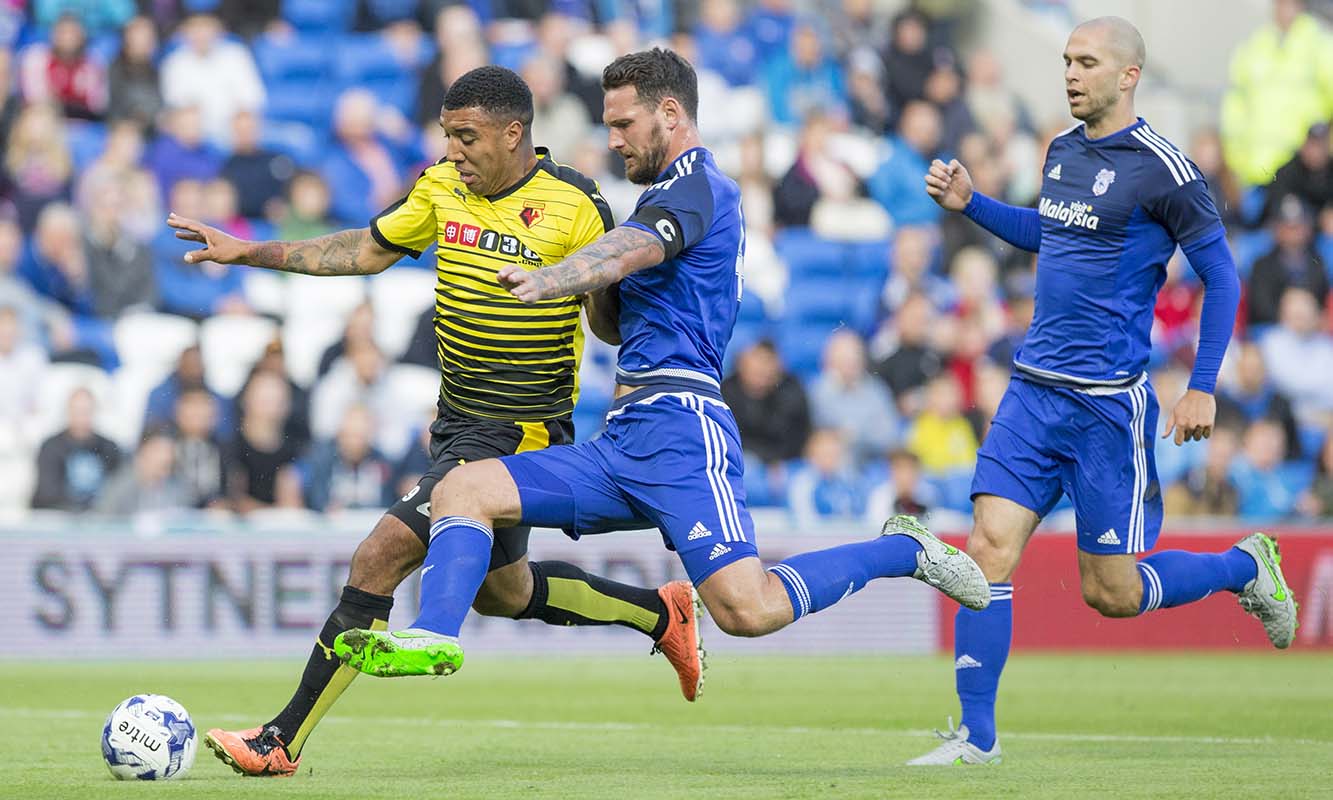 As the new 2015/16 football season has edged slowly edged nearer, I photographed a couple of gentle, at times slightly too friendly pre-season friendlies. Here’s a round-up of three games.

The first was an almost entirely forgettable 0-0 draw between Newport County and Queens Park Rangers at a rain-soaked Rodney Parade. 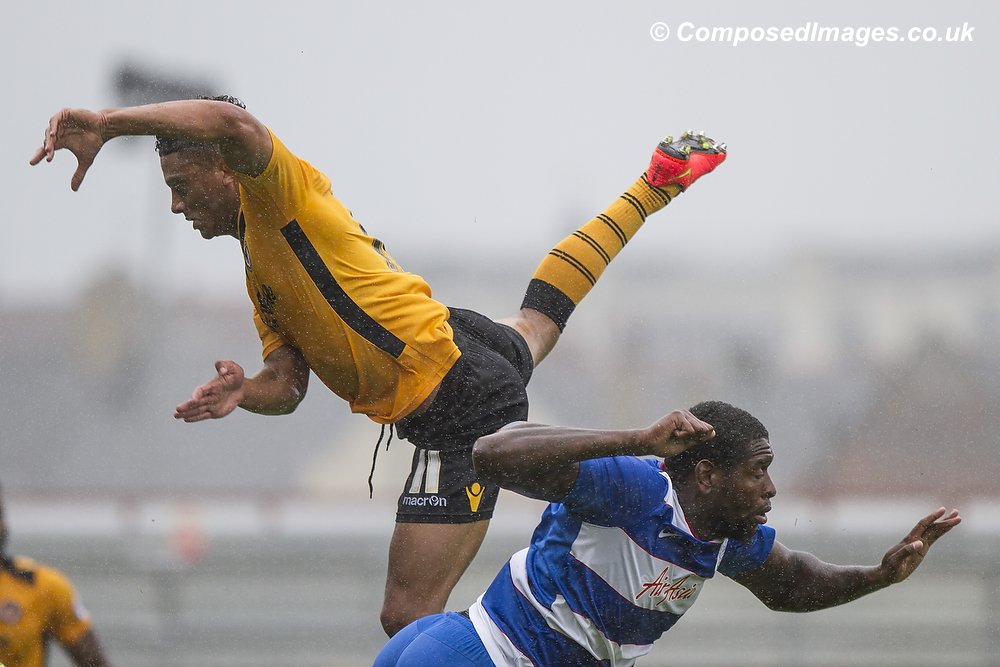 Nathan Ralph of Newport County (left) and Jay Emmanuel-Thomas of QPR in an aerial challenge during the pre-season friendly between Newport County and Queens Park Rangers at Rodney Parade, Newport, July 26th 2015.

Newport County’s new manager Terry Butcher appeared chuffed with the draw against a team two leagues higher. And with good reason. Butcher has begun from scratch at the club, cobbling together an almost entirely new squad of players after the club’s lottery-winning owner moved on, and a leaner financial structure was introduced under fan-based ownership.

QPR boss Chris Ramsey wore the same earnest, wounded expression he wore for much of last season, when his team was relegated from the Premier League with little more than a whimper. His team too is undergoing a rebuilding process despite retaining some experience, notably in the form of former England goalkeeper Rob Green.

Creditable 0-0 draw for Newport V QPR today. Stability the realistic aim for both next season? http://t.co/P8Vs2iy1r3pic.twitter.com/7gUIoCyTxn

Mid-table stability could well be a realistic target for both sides in the coming season.

Next up was an evening trip to Cardiff City for the visit of Premier League new boys Watford. Cardiff should be encouraged by bagging the 2-1 win, and by the promising form of striker Joe Mason, scorer of both goals and each of them a tidy finish.

Mason has struggled with injury in recent seasons and the big hope amongst the fans is that this will be his time to put all that behind him. There’s something old school and refreshingly unfancy about his manner and play which is hard not to appreciate. 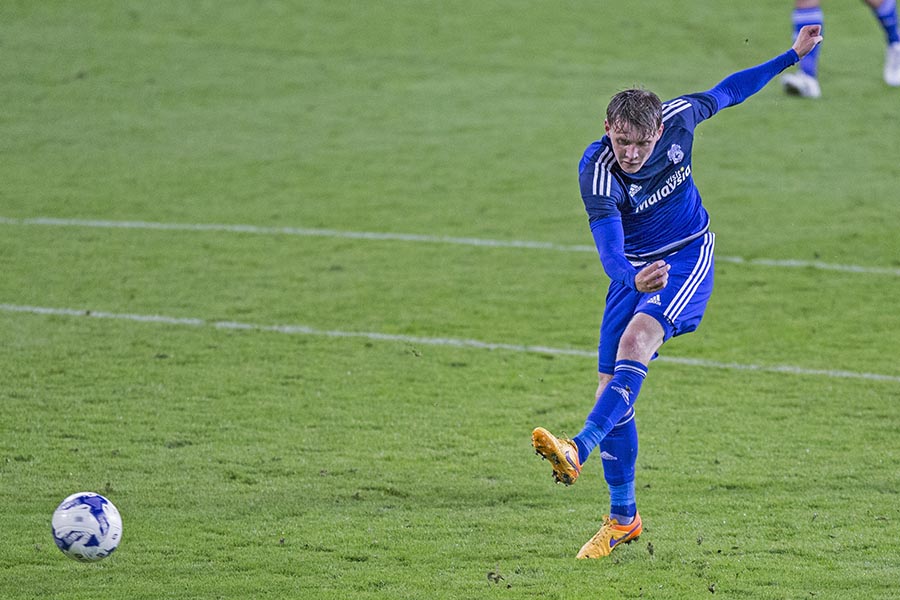 Joe Mason of Cardiff City completes a successful night by scoring his side’s winning goal and his second of the game in a 2-1 pre-season friendly win over Watford at Cardiff City Stadium on July 28th 2015.

Mason conveniently distracted from the home debut of Cardiff’s major summer signing Sammy Ameobi. The gangly winger, bought in from Newcastle on a season long loan, endured a torrid night. In the second half particularly it seemed no ball was controllable or accurately passable, and much as he gamely ran about, his substitution mid-way through the second half appeared to be a sympathetic bid to preserve what remained of his confidence. Part of the challenge concerns what position he plays, if he plays at all.

Again the weather was all too typical of a British summer, exploding into sudden violent downpours shortly before half-time, sending me and a couple of other photographers scuttling into the empty stand behind the goal.

Watford’s performance was patchy, zipping the ball about and retaining possession neatly, but seeming to lack thrust. They have plenty of new players to try and bed into the certain systems for what”s likely to be a gruelling season ahead, and these pre-season games are all about trying to achieve that.

Last Sunday I visited Swindon Town’s County Ground, a new stadium for me, to photograph the visit of Liverpool for Propaganda Photo. It seemed like there were plenty more replica Liverpool shirts around than Swindon, and plenty of excitement among the fans.

The match marked the debut for two big money signings of Liverpool: Belgium striker Christian Benteke, who I last photographed in June trying to batter down a stubborn Wales defence in Cardiff, signed from Aston Villa for £32.5 million; and Brazilian playmaker/striker Roberto Firmino, signed from Hoffenheim – a bargain at just £29 million. It also marked the debut of goalkeeper Adam Bogdan who they got from Bolton Wanderers, free.

On a baking hot day in Wiltshire the two new expensive signings were in the thick of the action from the start. Inside the opening five minutes Swindon goalkeeper Vigouroux pole-axed Firmino in a one-on-one collision, sending the Brazilian somersaulting through the air, making nice shots. But when it came to a key moment early in the second half, luck failed me. In fact I only realised what a brilliant goal it was 24 hours later after seeing a Vine video on Twitter. My line of sight had been completely obstructed by a Swindon defender when Benteke, in one smooth motion, spun and struck a sublime volley into the top corner. These things happen.

Benteke’s goal was equalised by a tidy curling effort from Swindon’s Jonathan Obika half way through the second half. The League One side had stood up well against a Premier League side blended with real quality, youthful promise and experience. They probably deserved a draw too, Liverpool always with a clear edge but failing to create or convert enough clear cut chances.

Late in the game one of Liverpool’s fledgelings Sheyi Ojo panickily shot from the right side of the area. Off balance, it looked like a strike that could go anywhere. I heard the ball thwack firmly against the goalkeeper’s gloves to suggest it shouldn’t really have resulted in a goal, but it resulted in a goal. There was just enough power behind the shot to see it trickle over the line, and the scousers behind me erupted. Ojo looked and pointed to the sky in understated celebration just as Benteke had, and a cheerful Brendan Rodgers, expensive new signings and company saw out the 2-1 win.

With any luck, these matches will have helped me get my eye-in for the season ahead.

[…] covering a few pre-season friendlies, now a new term is finally dawning, the often ridiculous soap opera is beginning anew and the […]