Back pain and Ukraine 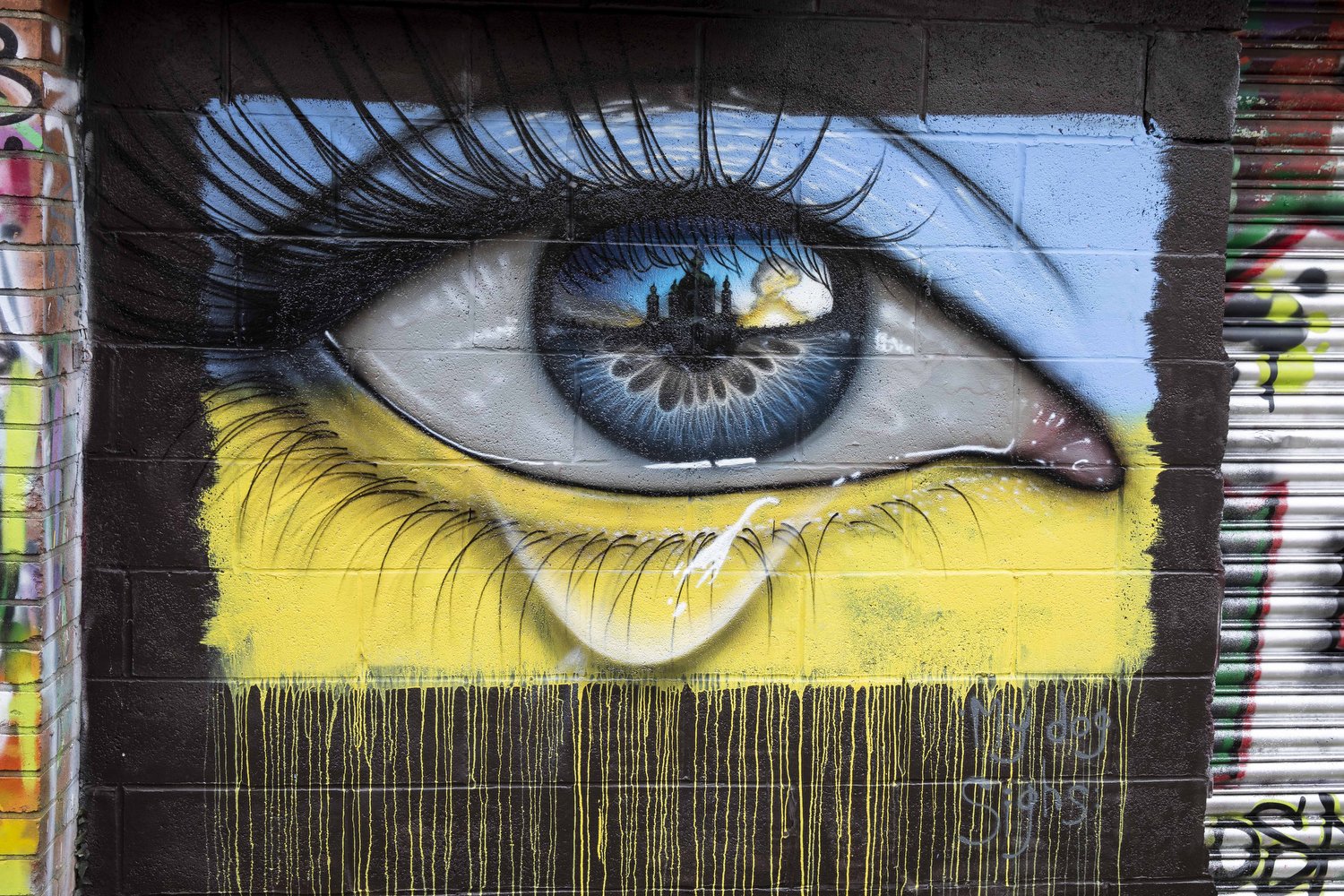 Monday afternoon, standing at improvised kitchen surface desk: kitchen surface, upturned plastic washing-up bowl, cardboard box. Because my back is still sore. Putting on socks isn’t quite as traumatic as it was this time last week, but it’s still a long way from right, despite two recent trips to the chiropractor.

The day after my last appointment I went to Crickhowell in Powys, mid-Wales, for a PR job. I photographed at a small gym before heading into the hills with Tal and climbing what’s known as Table Mountain. I did all that, never fully escaping the shadow of pain in my lower back, which occasionally pranged and still persists. 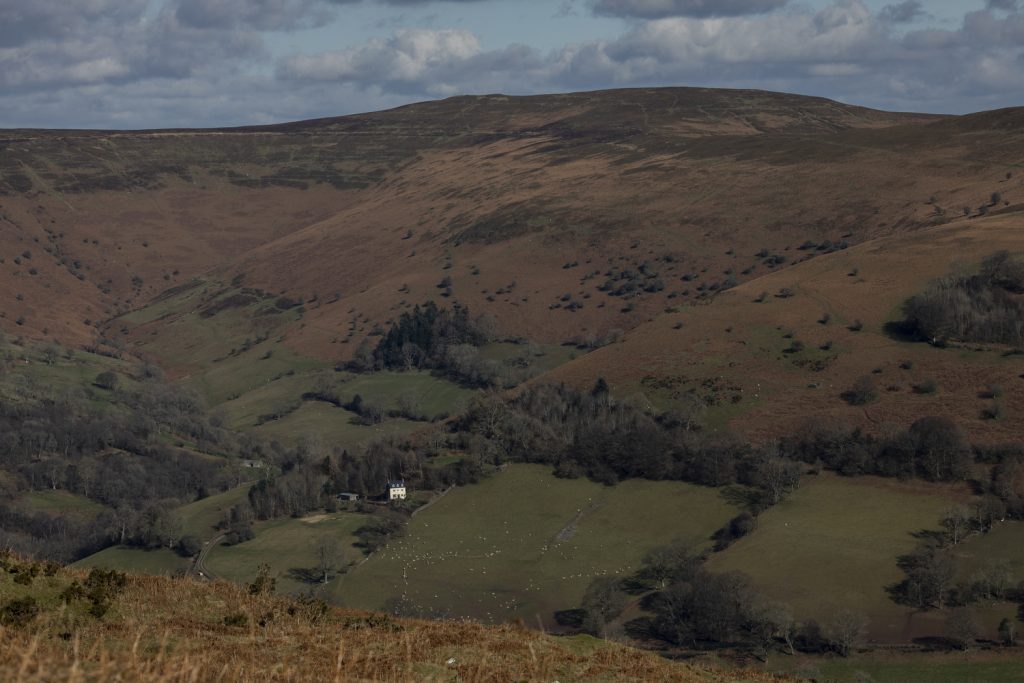 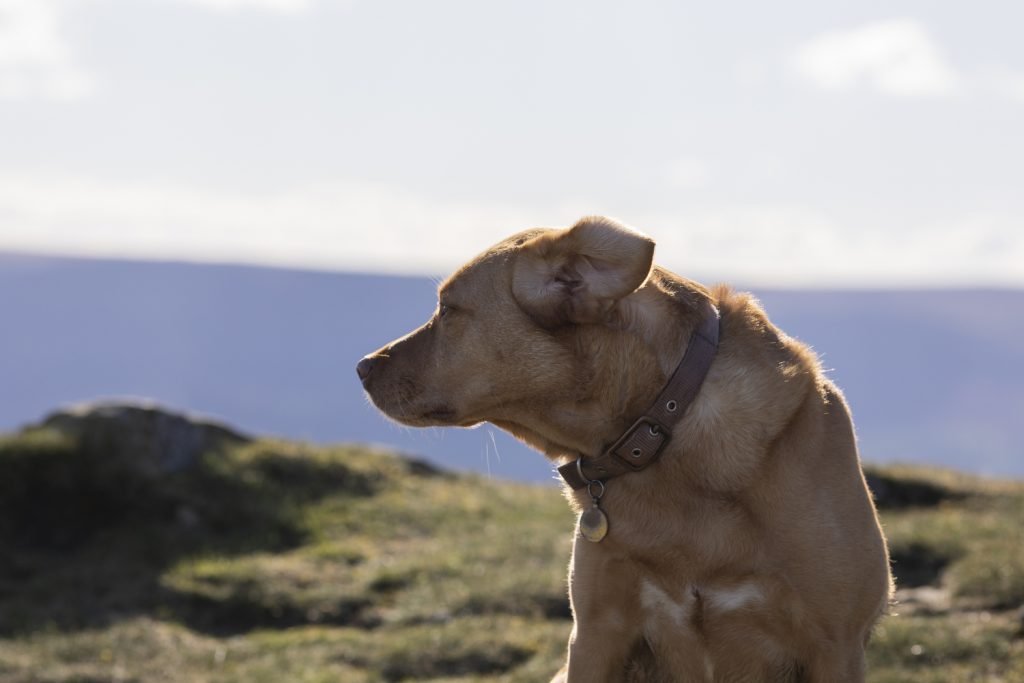 These days and weeks are hard to live through, even some distance from the war in Ukraine. An associated mental pain is always there too, similar to low-level back pain. A dark, shadowy thing you are aware of, lurking in the background at the edge of your consciousness. Sometimes it is suddenly awakened, and breathtakingly acute. If, late at night, you happen upon a video of a man your age putting his wife and child on a bus as he stays to fight. Or just before bed, mid ill-advised doom-scroll, you glimpse an unguarded picture of a woman and her children, lying dead on the ground, caught trying to escape shelling.

Every day you wake up wondering what the latest is, and at various points around the clock, or in the middle of the night. Too many points around the clock, for me. You wonder how recognisable the world of the future will be, even 10, 20, 30 years hence. How dented or destroyed by war, virus and climate change? What will our children’s future actually like? The Brexit-obsessed 2018 world my daughter emerged into seems so comparatively innocent to this 2022 version. You feel somehow complicit in everything that’s happened since.

There was a direct nuclear scare last week when the Russians shelled the largest nuclear energy site in Europe, or a tiny distance outside the perimeter of it. There is still an ongoing danger, with Russians in charge of Chernobyl. What if something like that happens again, in the middle of the night, and it’s not just a scare?

Yesterday lunchtime I photographed a fairly small but powerful and dignified protest outside the Senedd in Cardiff Bay. Grief-stricken, haunted faces, old and young. Some attempting lightness. A young member of the congregation full of smiles, seemingly unburdened by the weight of it all, enjoying leaping around on the steps. 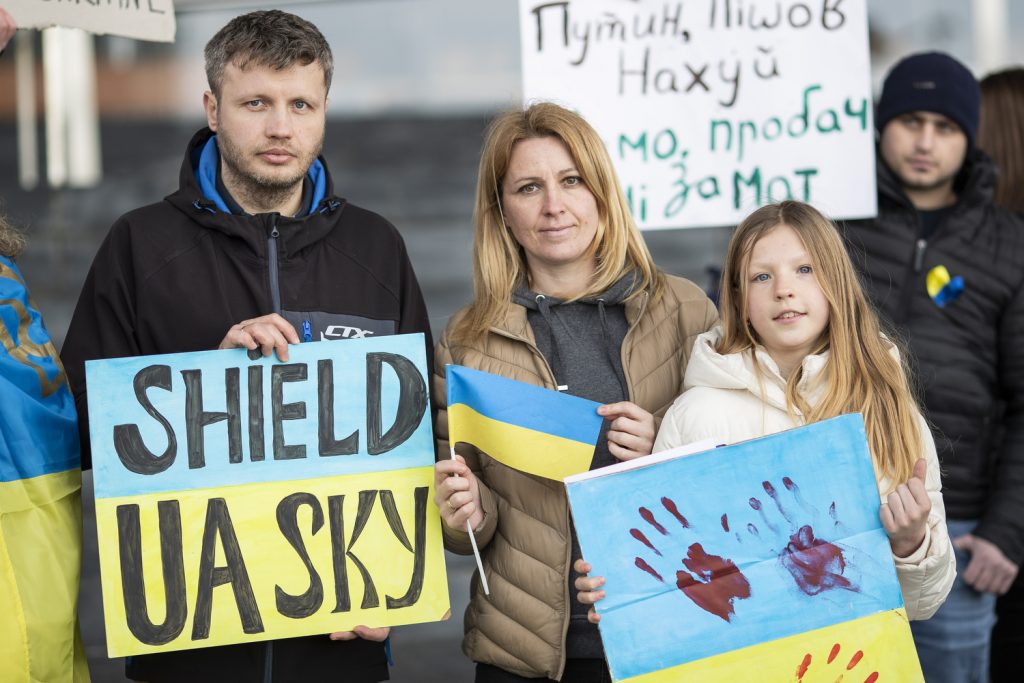 Cardiff, Wales, UK. 6 March, 2022. An anti-war protest in support of Ukraine outside the Senedd Cymru Welsh Parliament in Cardiff Bay. 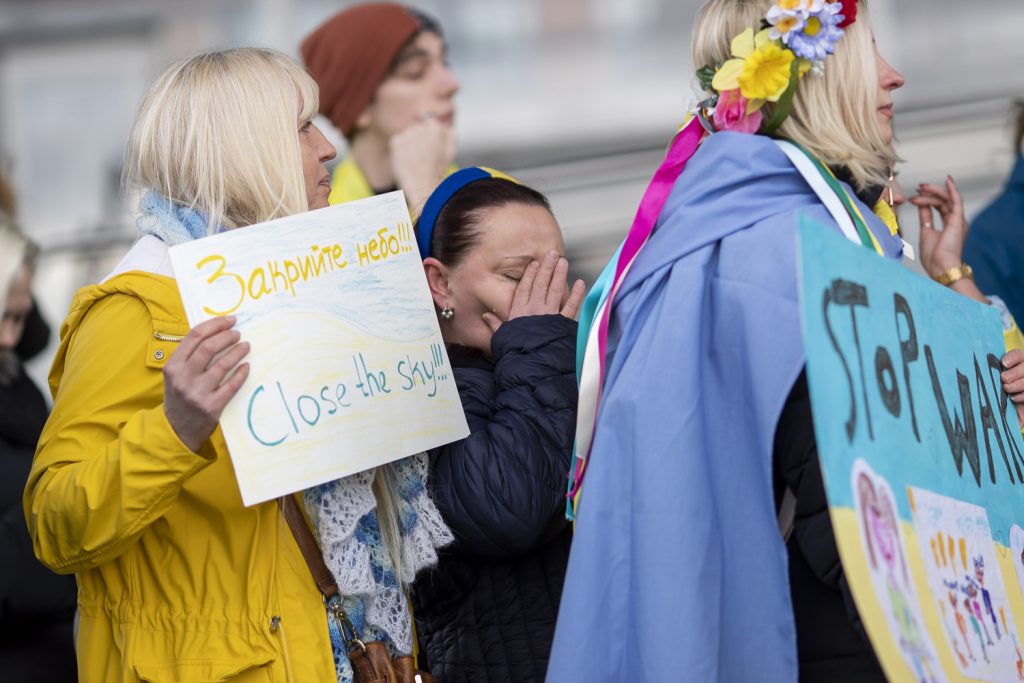 Cardiff, Wales, UK. 6 March, 2022. A woman wipes away tears during an anti-war protest in support of Ukraine outside the Senedd Cymru Welsh Parliament in Cardiff Bay. 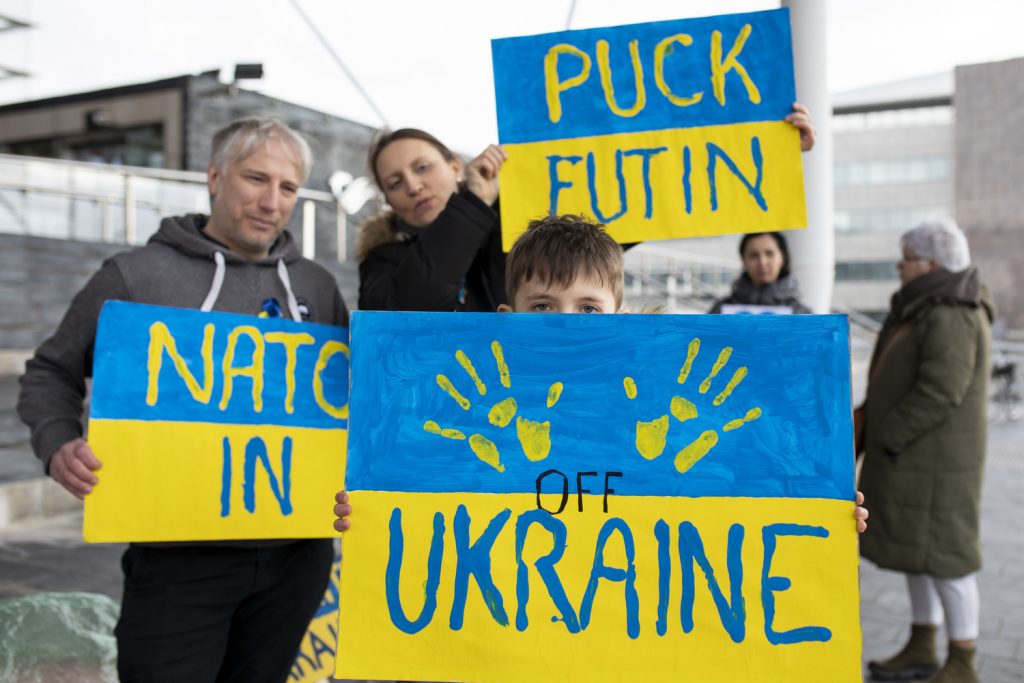 Many of us are still grieving peacetime in Europe and are fearful of the future. We are in a process of adjustment.

It’s difficult thing to reconcile in relation to my infant daughter. The constant pull I have of wanting to be honest with her about everything, on this occasion feels inappropriate. She is three years-old. I am unlike those in and around the war-zone who have little choice but to try and explain things to their children on some level, what those exploding sounds are, what is happening, why they have to quickly move. I have the luxury of being able to protect my child from certain information, for now. She should not have to confront such things, and would not fully understand anyway. And yet the same could be said of those in the middle of it. It is a crushing theft of innocence from an entire generation of Ukrainians. I deeply envy her cheery obliviousness to it all, but around her I try not to leak gloom, sadness and fear. Your job as a parent is to promote fun and joy and hope and trust in the future, even if it feels uncomfortably misleading.

I try not to have the radio on around her, when a sequence of brutally horrible words may be broadcast at any time, and certainly there is no news television shown anywhere around her. Although I haven’t been consuming much of that either. Virtually all of my consumption is done privately online.

That itself is a horrible paradoxical compulsion. Almost a vice. You want to know. You ought to know. This is profoundly important. It doesn’t get more important than this. But you don’t want to know, it is bad for your mental health, it is just bleak and dark and what can you do about it anyway? Just bury your head in that sand over there. 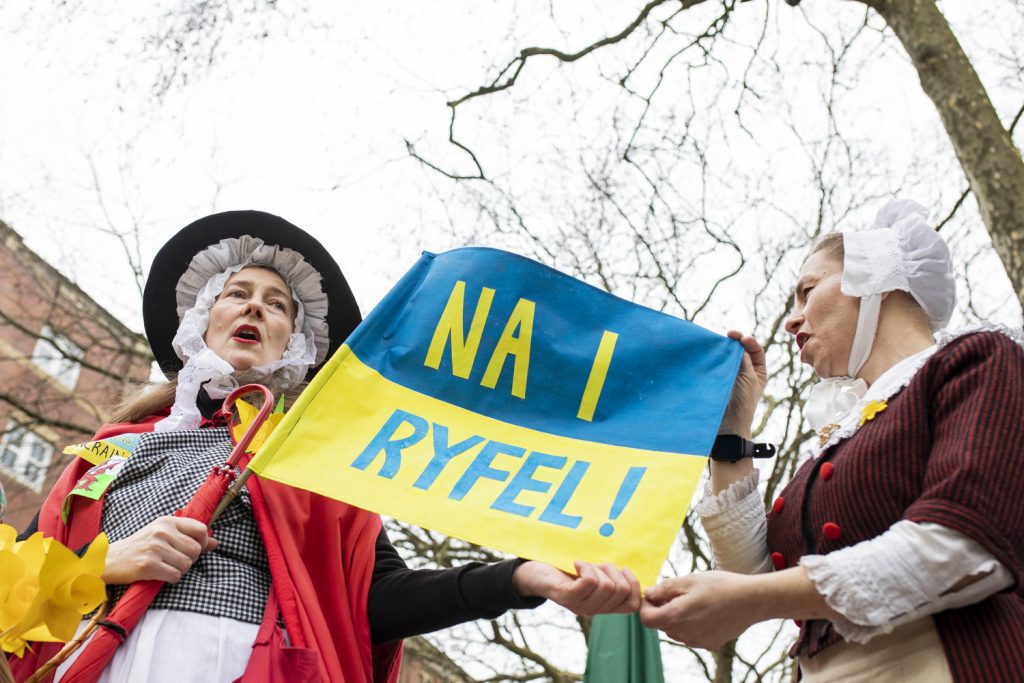 Cardiff, Wales, UK. 1 March, 2022. Women wearing traditional Welsh dress sing their country’s national anthem while holding a flag in support of Ukraine that says ‘No To War’ in Welsh, during the St David’s Day Parade in Cardiff city centre.

The presence and proximity of such brutal, evil, unpredictable warfare, makes you cherish what you have. It was why I was keen to climb a mountain on a beautiful sunkissed saturday, to taste that expansive freedom, to see that land stretching on forever. It’s the new context in which you hold your nearest and dearest close, for those extra few seconds at bedtime. You see families being ripped apart, their territory and freedom vanishing. You have no idea what will happen next, like everyone else, from people on the street to world-leaders.

Still, you can’t let it rule your life. You get through the day-to-day, most often not talking about it with people: partners, neighbours, clients, colleagues. You half pretend it isn’t happening, and isn’t relevant. You talk about money and the cost-of-living crisis instead. It’s easier. The depressingly constant price hikes in fuel, gas and food. Although of course it’s all connected. You try to ignore the ghostly shadow of pain that might suddenly rise up and overwhelm at any moment. 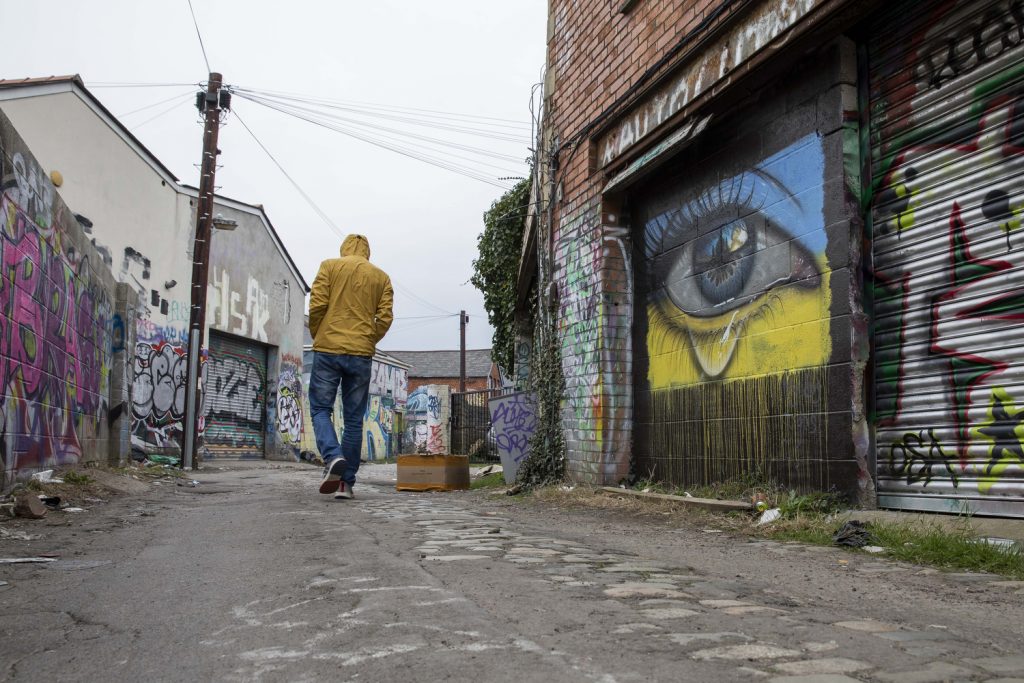 A man (me) passes the widely acclaimed weeping Ukrainian eye, painted in a Cardiff back-street by My Dog Sighs on February 28 2022.

A severe relapse of the back pain arrived shortly after first posting the words above. I did a job on Tuesday evening, which in hindsight I should not have done – that freelancer instinct to unthinkingly accept all offered work. It involved a lot of restlessly waiting around until around 11pm, while most people in the building were having an annoyingly fantastic time.

On Wednesday morning the pain was agonising and C had to put on my socks for me. As bad as I have ever experienced, this rocketing pain made me hobble around in tiny lop-sided movements, feeling like I might need a zimmer frame, paralysed in a skeletal straitjacket. I cancelled another event photo job that evening, asked a GP to prescribe me some strong painkillers and spent much of the day in bed, feeling feeble, pathetic and old.

It’s hard not to feel frustrated and slightly sorry for yourself in such a situation. Then you read the news about a children’s hospital being bombed. Such news makes nothing better. Sure, it offers a kind of horrific perspective, but our own problems still exist too. They are still valid. How we process what’s going on in the world with how we exist in our day-to-day: that’s a deeply individual thing to grapple with. We just try to do whatever works best.