Oxfordshire Wedding Of Kate and Teddy 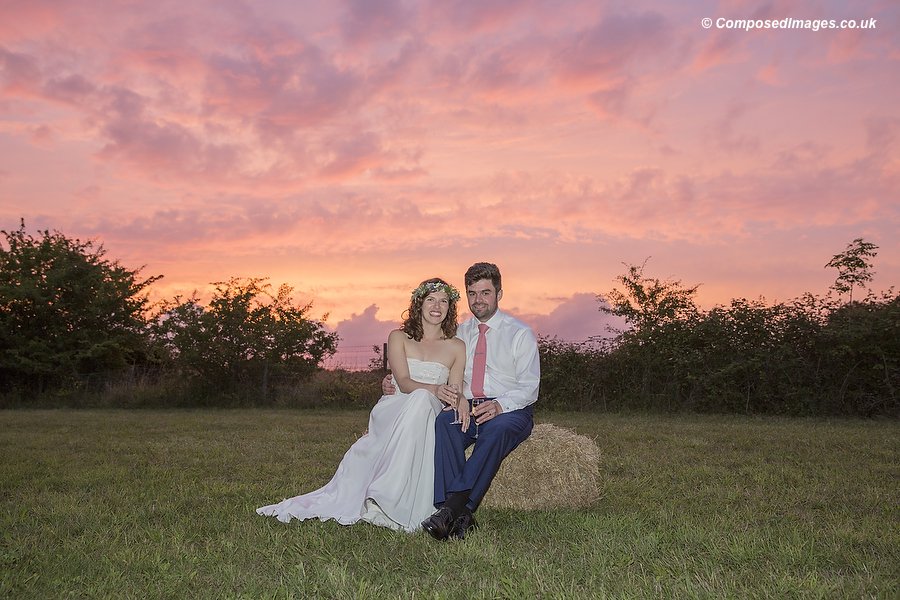 Wedding photography arrived like buses back at the end of August. I hadn’t done any in a while and then two came along, one day after the other. Both had been in the diary for well over a year, so weren’t unexpected, but nonetheless it felt like being thrown headlong into a serious test of stamina.

Following the wedding of Giles and Danielle at Egypt Mill and Spa in Gloucestershire, the next day I enjoyed a day of Oxfordshire wedding photography, this time for the big day of Kate and Teddy an hour or so further east along a pretty Cotswolds A-road. 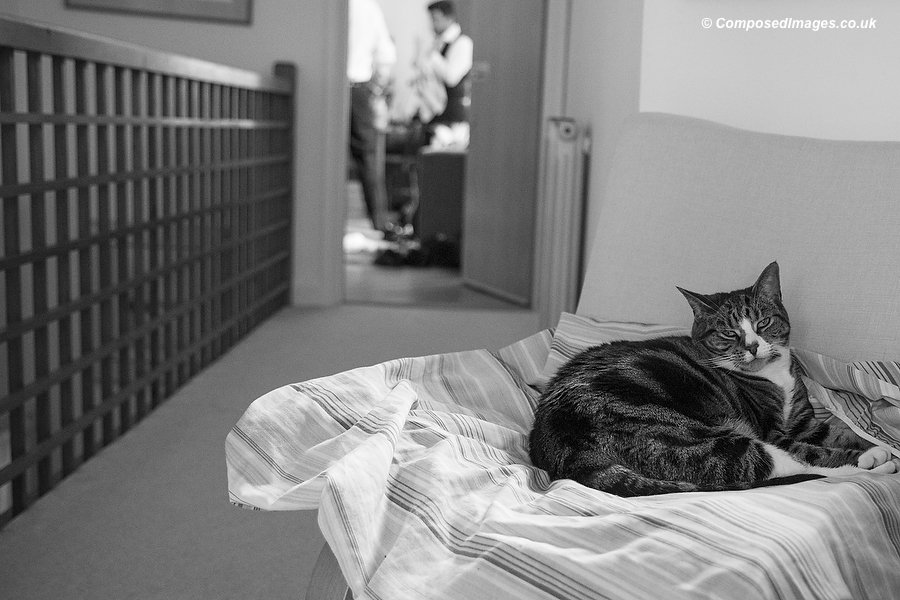 This wedding was utterly unique for a number of reasons, as of course they all are. Not least was that it was held in a large field just over the garden hedge of the bride’s childhood home. It was hard not to fall in love with the house, expertly designed by the bride’s architect father. Buckets of beautifully slanting natural light really made the bridal preparation shots in Kate’s childhood attic bedroom for me, a bedroom which overlooked the field and rolling Oxfordshire hillsides beyond. 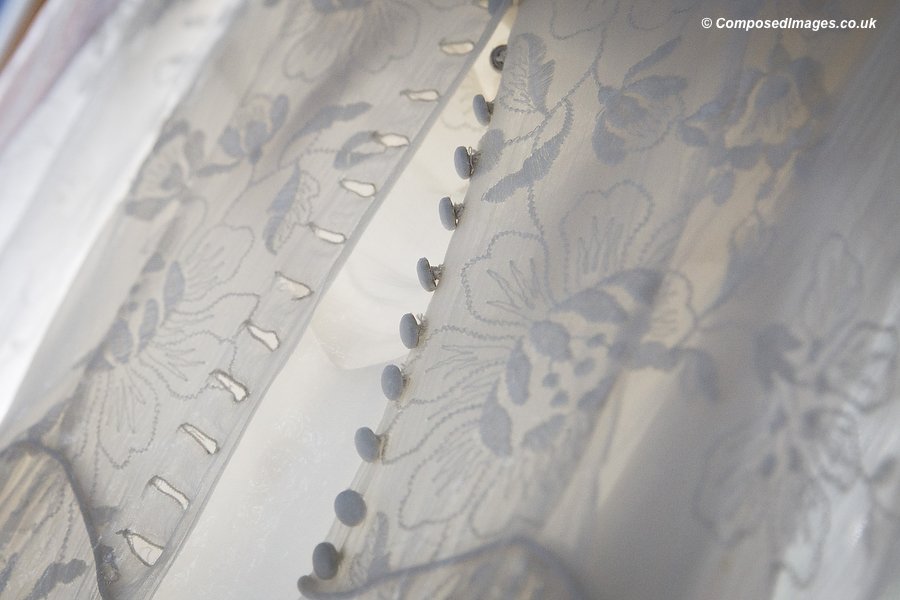 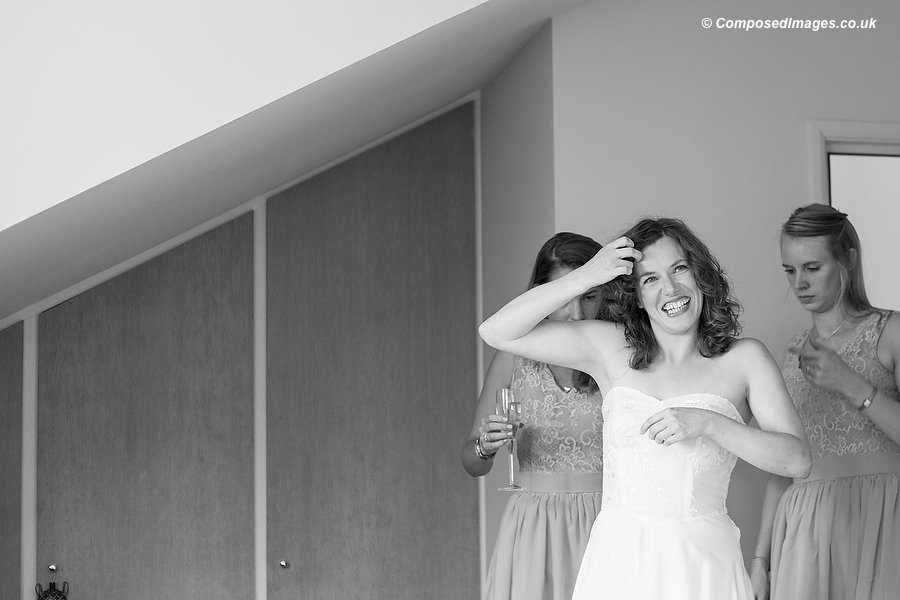 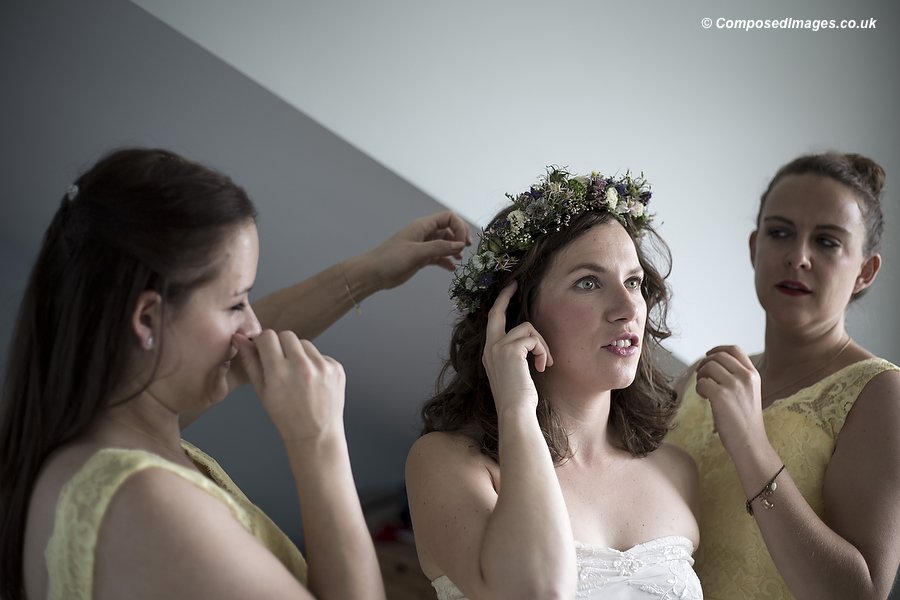 Also helpful in these shots was the bride, Kate. She has one of those beamingly wide smiles which totally transform a face and generally makes you feel better about the world. On your wedding day, you’re sort of obliged to turn smiles on and off, but with her it never appeared forced – even if it was. That’s an enviable asset. 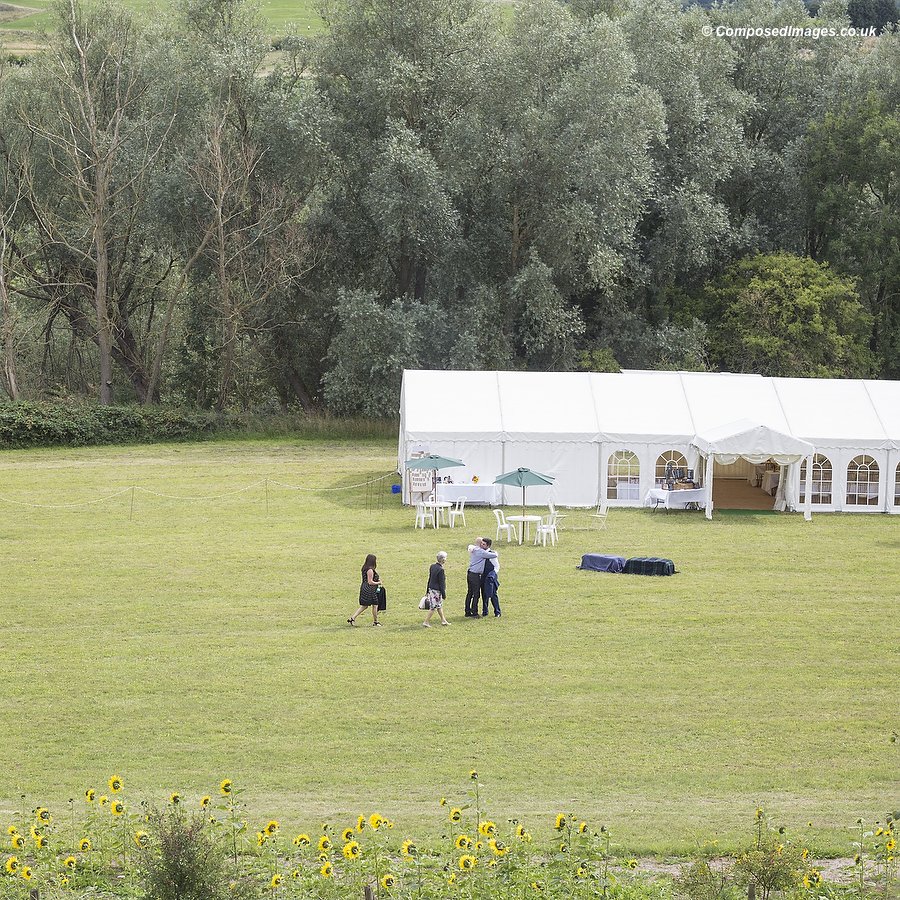 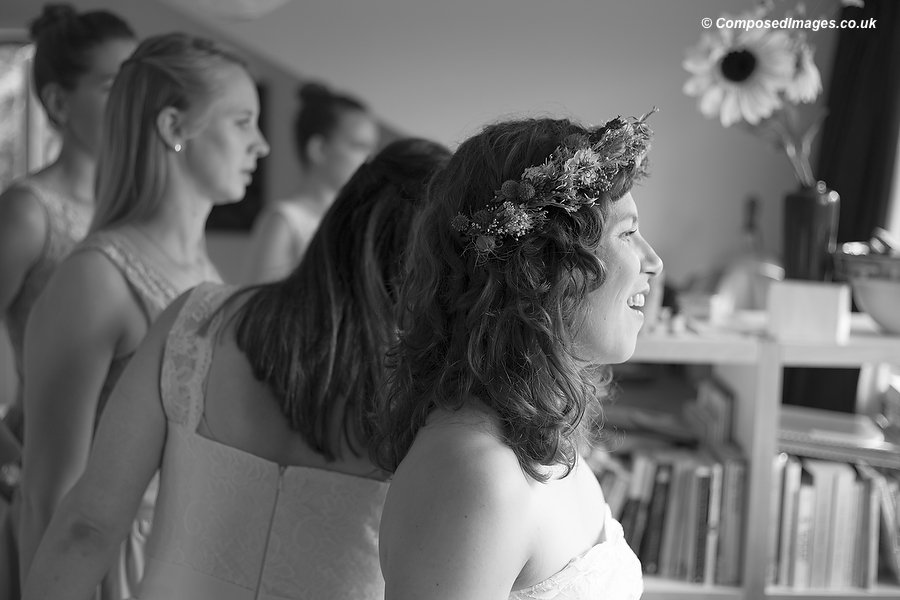 There was much to enjoy about capturing the wedding photography, despite the sun failing to penetrate overcast skies. Kate has dual nationality, which helped to add an international flavour to the event, with people travelling many miles from different points across the Atlantic. The Oxfordshire field set-up worked brilliantly, the sunflowers proving a lovely backdrop to the humanist ceremony, even if the microphones intruded a little. 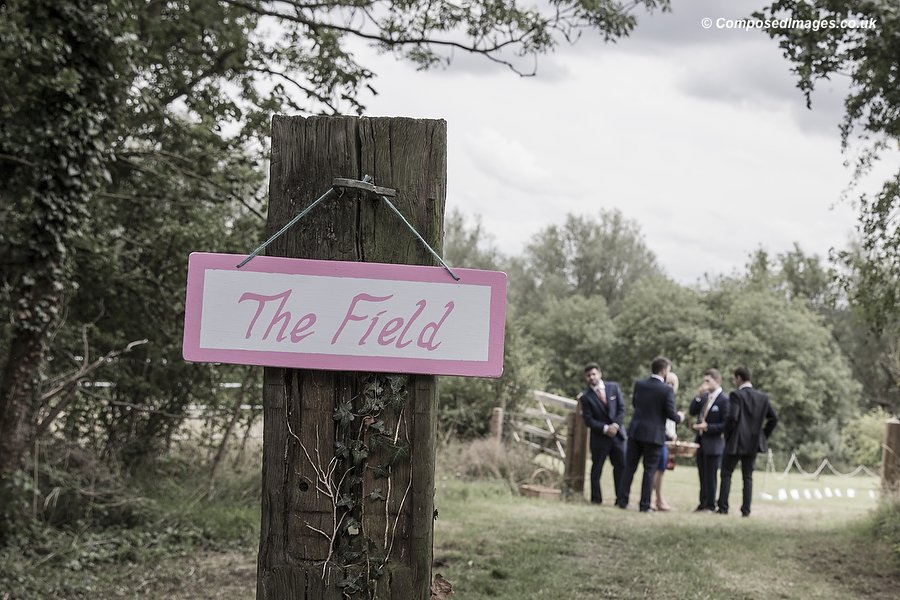 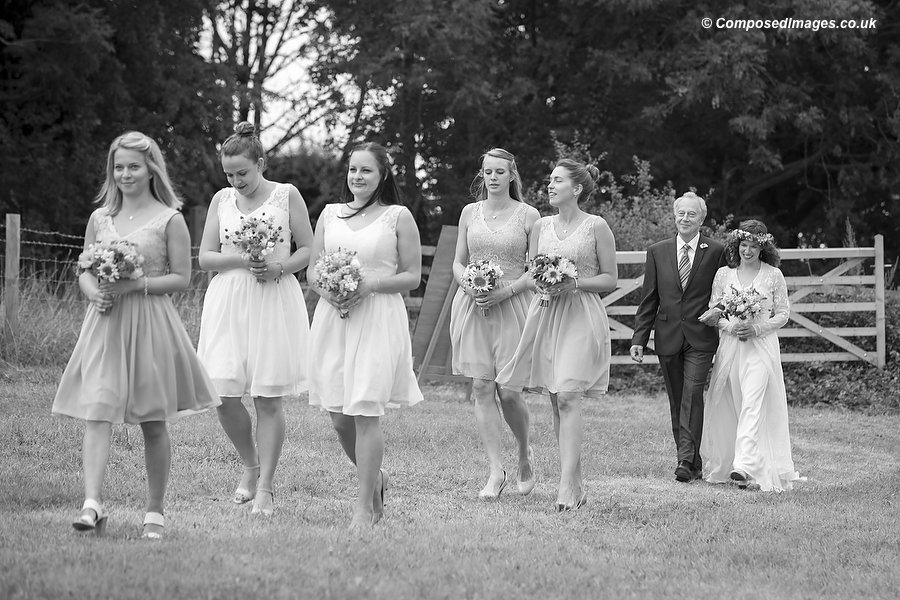 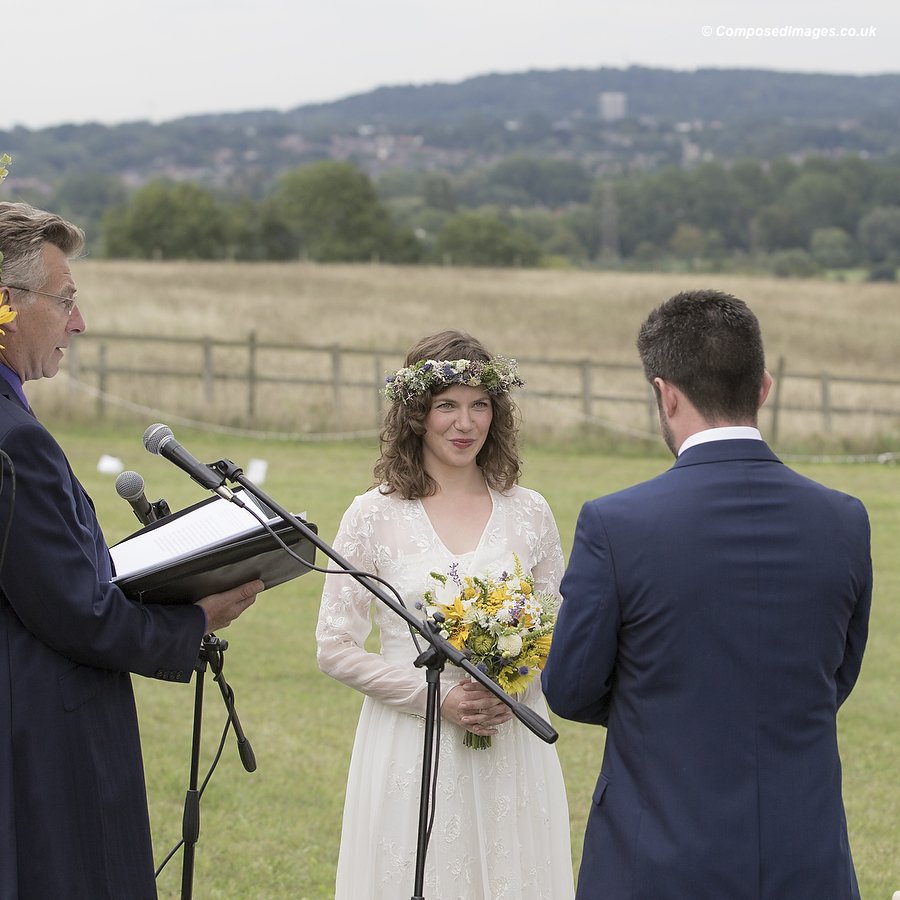 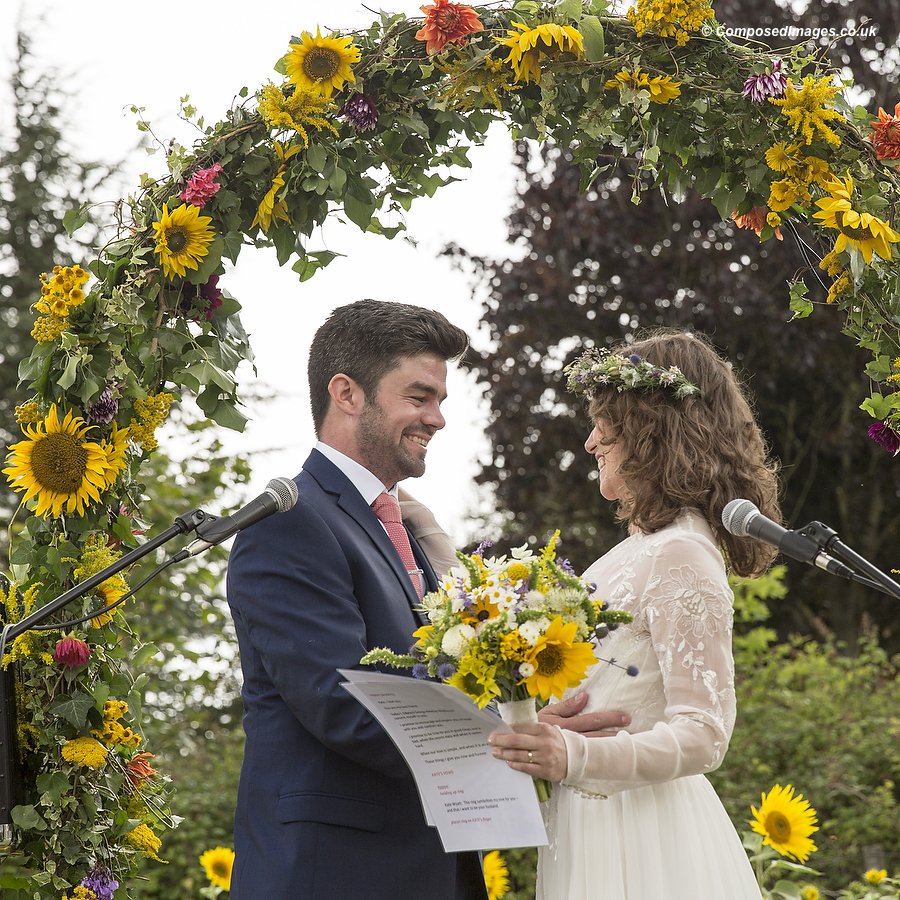 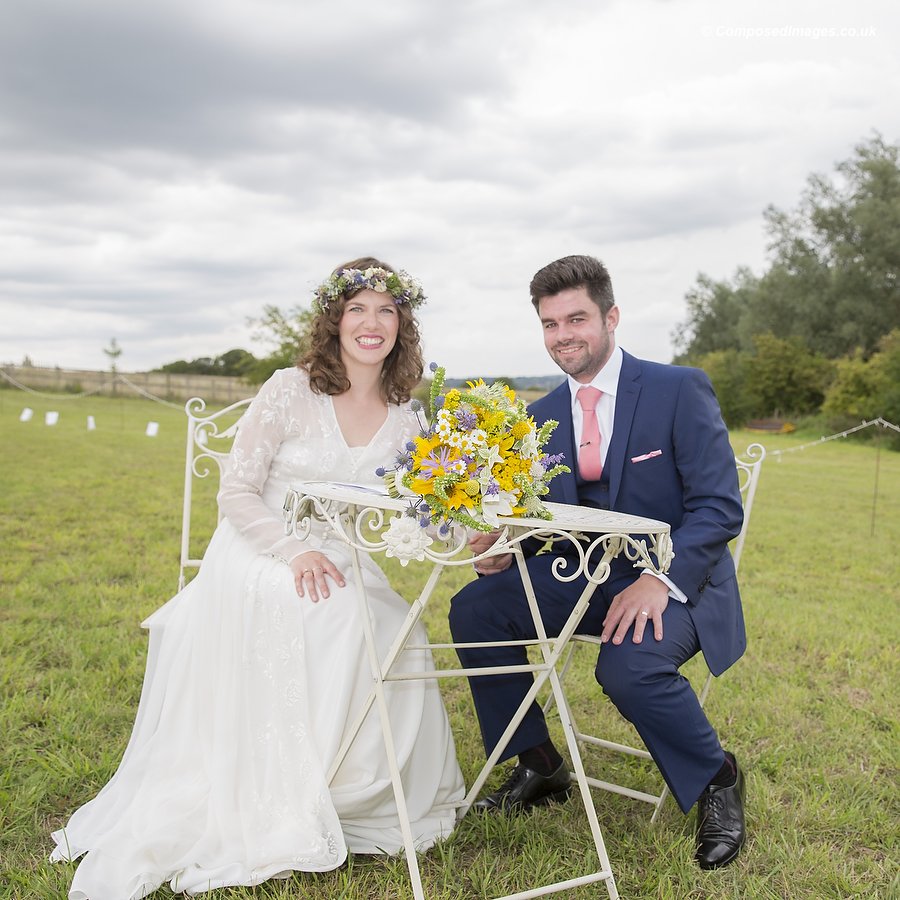 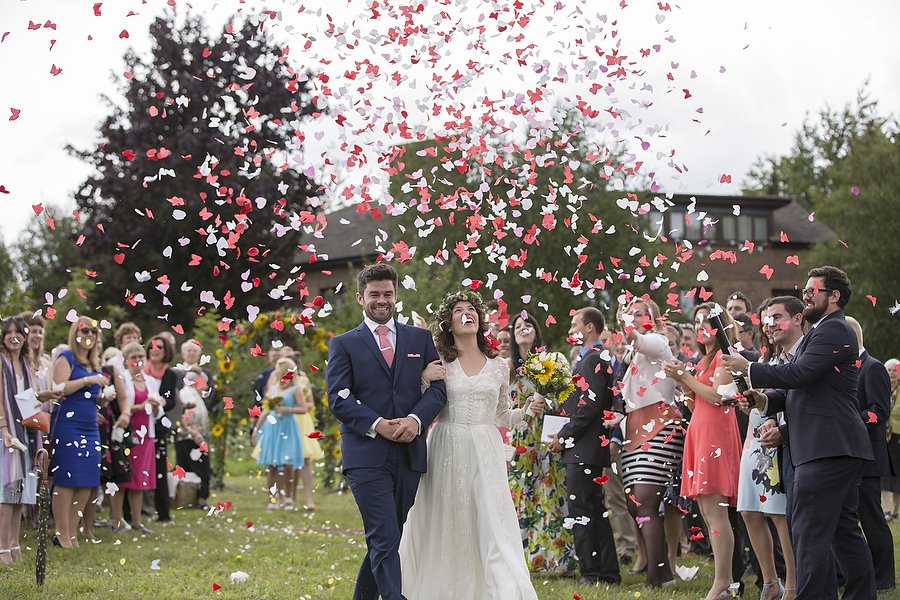 When it comes to the posed photos with best men and bridesmaids, after sensible photographs I like to give the option for silliness. The girls took up the chance to leap with flowers, while the best man suggested a spot of air guitar for the boys. I think both worked ok. 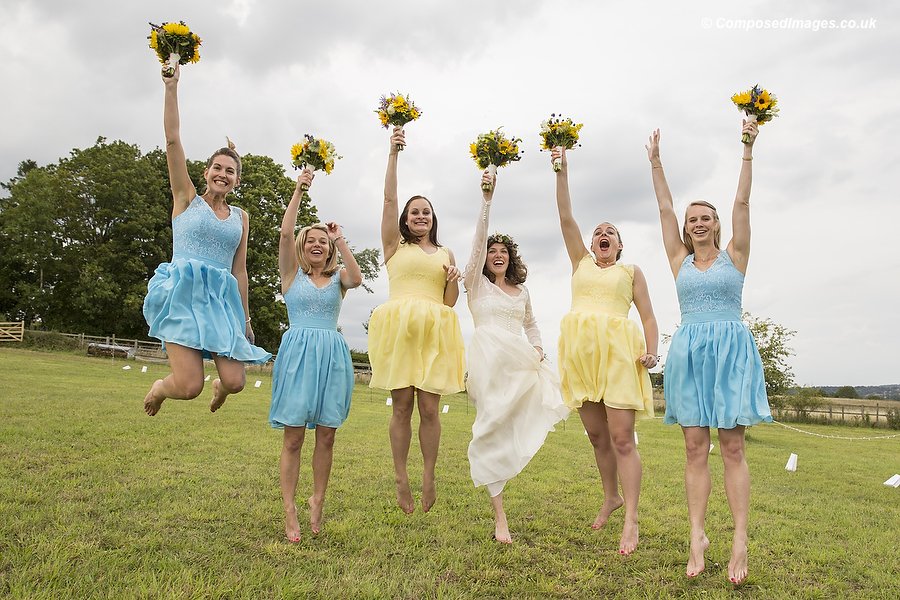 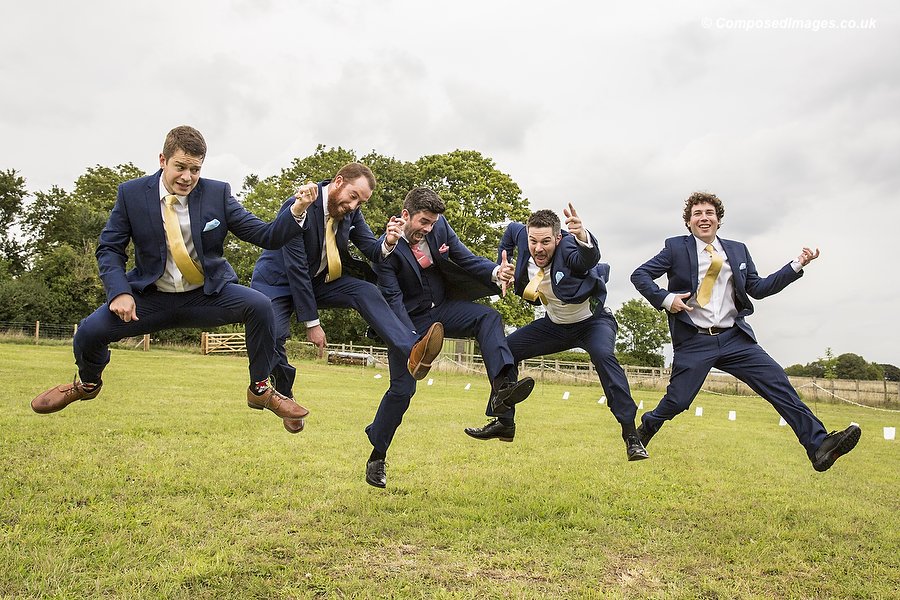 With all of them lined up together, there was general debate between them about a silly shot. It appeared to me like there wasn’t quite enough unanimity across everyone to try something, to the disappointment of the best man. But before taking it upon myself to make the executive decision and rule it out I chanced a cheeky frame of everyone laughing together, which I think worked nicely and hopefully provided a decent natural alternative.

South East based Mobile Pizzeria was hired in to provide a good selection of food for the wedding breakfast. A great many wood fire baked pizzas fed the hungry wedding guests, which appeared to be a hit. 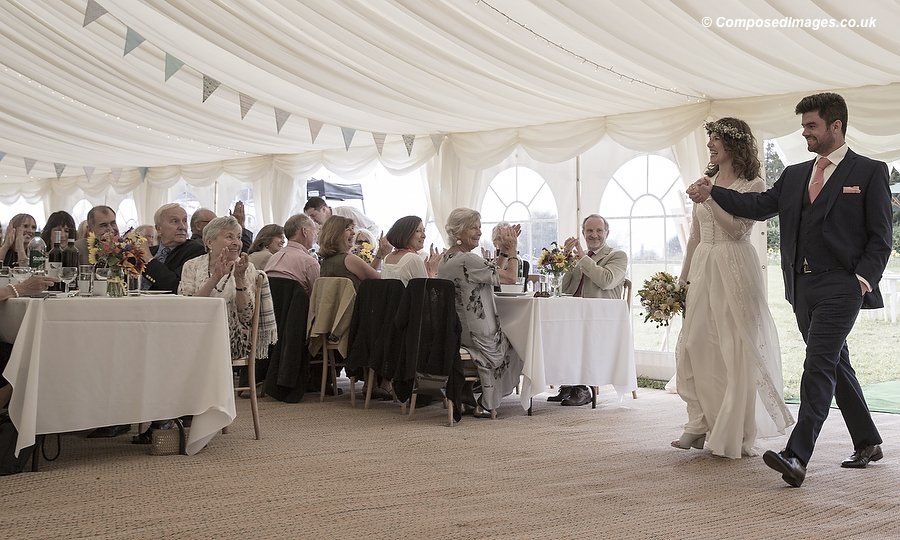 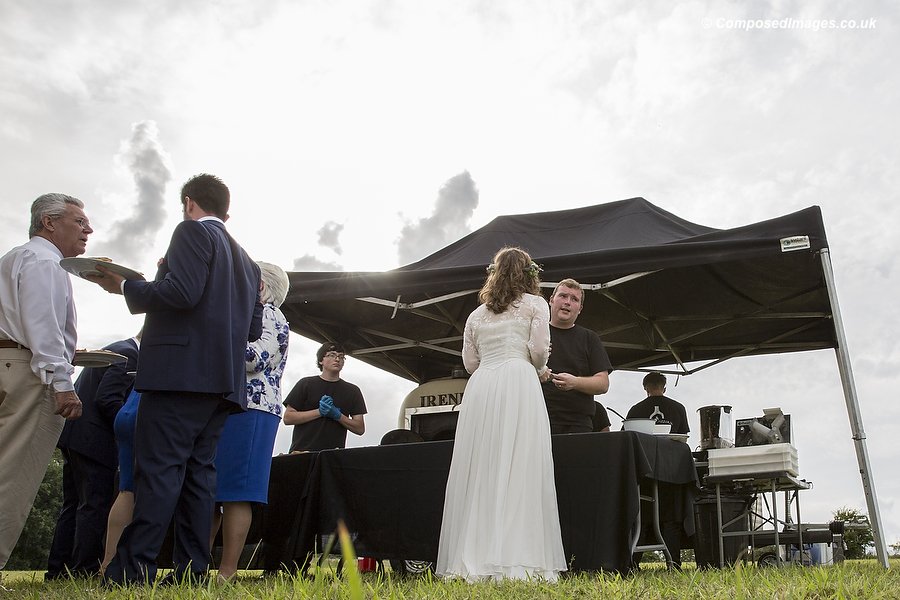 Then came the speeches. 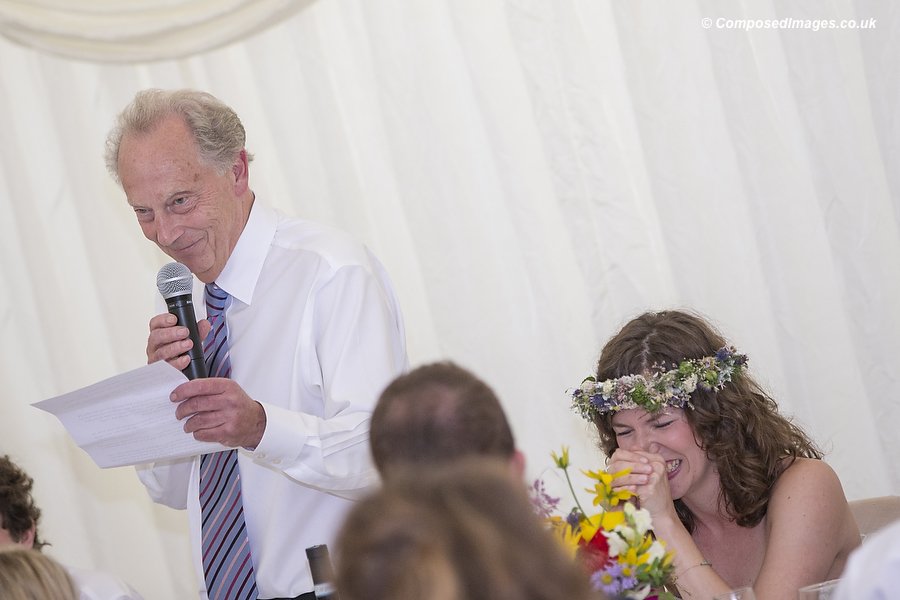 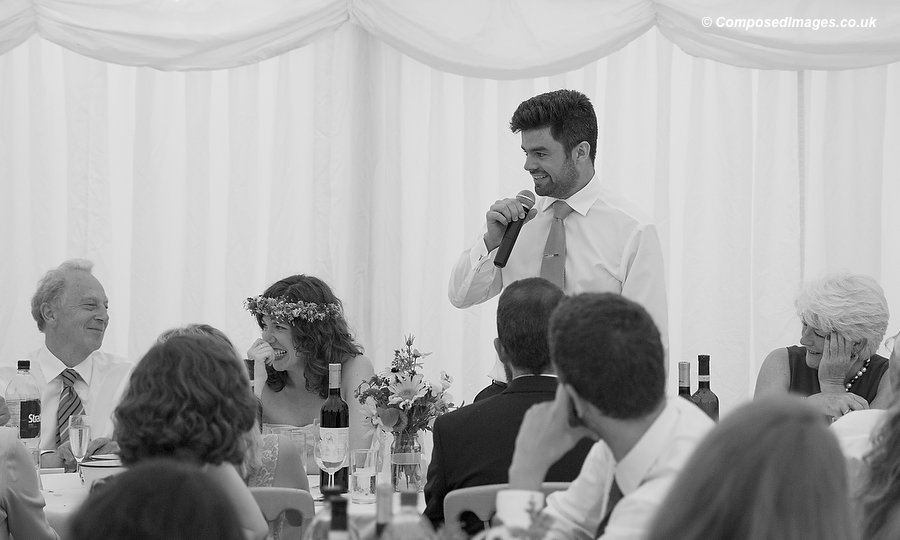 I particularly love the look on the bridesmaid’s face in one image during Kate’s speech. We can forget too easily when looking back, or forward, that although a wedding is a celebration of one couple, it’s a celebration of the love everyone else has for them too; all their friends and family. It radiates most movingly from parents whose bursting pride almost overflows, but I like to think this shot shows what it can mean for close friends. 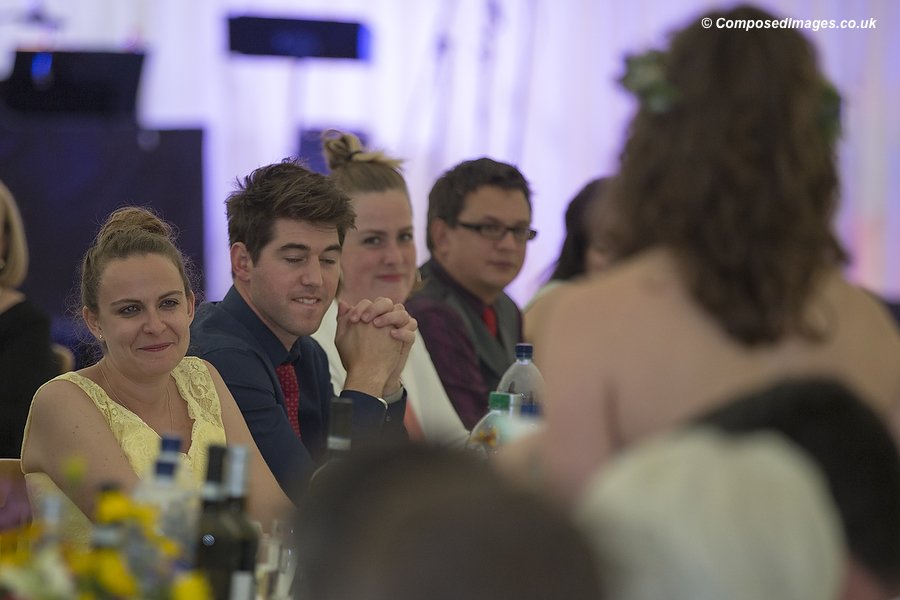 Possibly most remarkable for me as the photographer, and something unplannable which made the day and created a highlight amongst the images, was one of the most incredible sunsets I’ve witnessed all year.

It was around that time, post dinner, post speeches, when it had been mooted that I’d try taking the bride and groom away for a short walk and a few shots alone, if they were keen. Out of the corner of my eye, just over the rump of the hill the sky glinted pink. This seemed all the more sudden and magical because the afternoon had been devoid of any blue sky, colour or direct sunlight.

Walking to the top of the field I saw the pink was beginning to bloom over Oxford, as was my excitement, much as I tried to play it cool. It was astonishingly beautiful and set to explode even more vibrantly. Fortunately the bride and groom were available, so after hurriedly heaving a bale of hay across the field and into the foreground, I was able to use the incredible canvas as my background. Hopefully I managed to do it some justice. 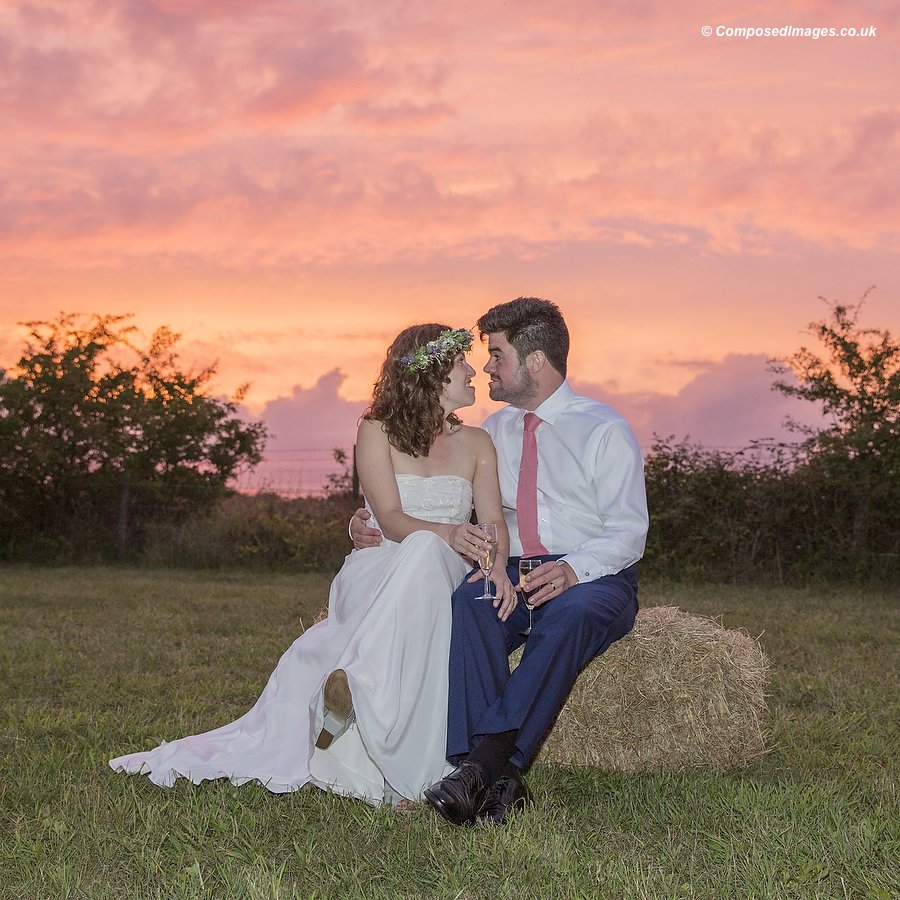 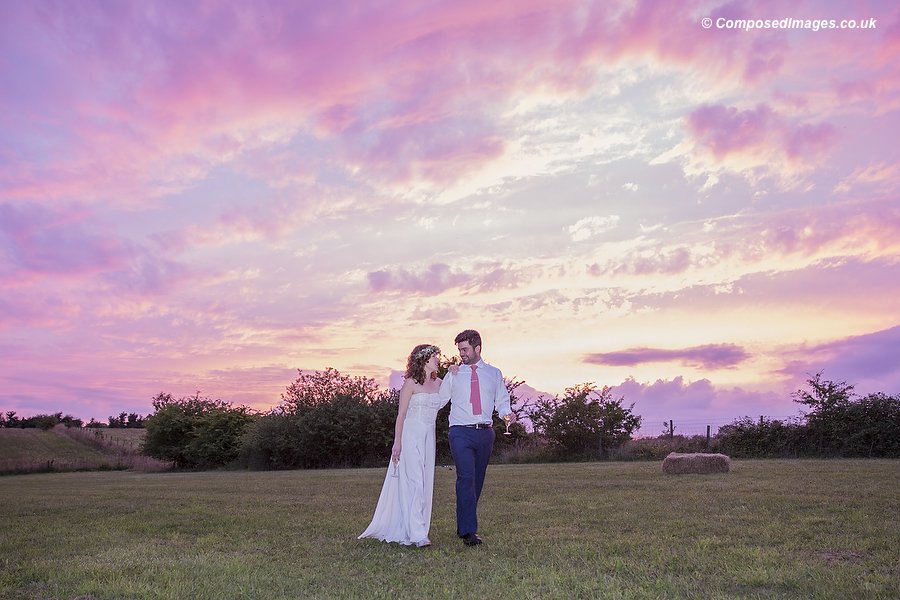 There’s also a faint trace of rainbow carving through the left side of this next one. 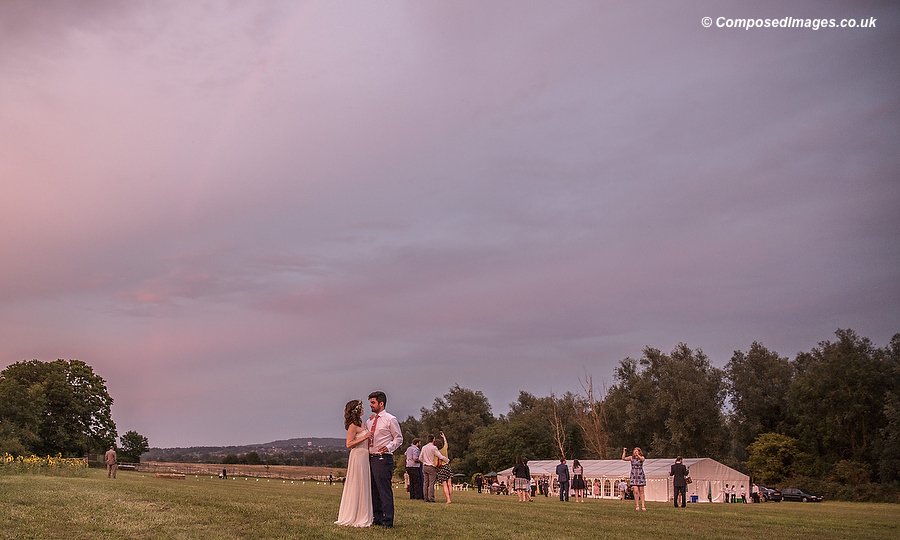 As the pinks slowly faded away and darkness blanketed the field, a first dance was taken to the music a live band. 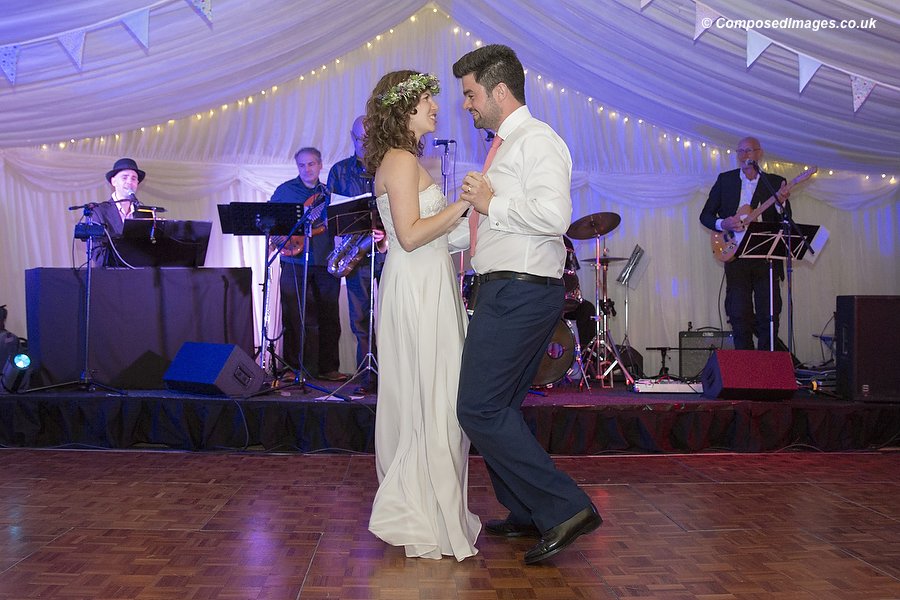 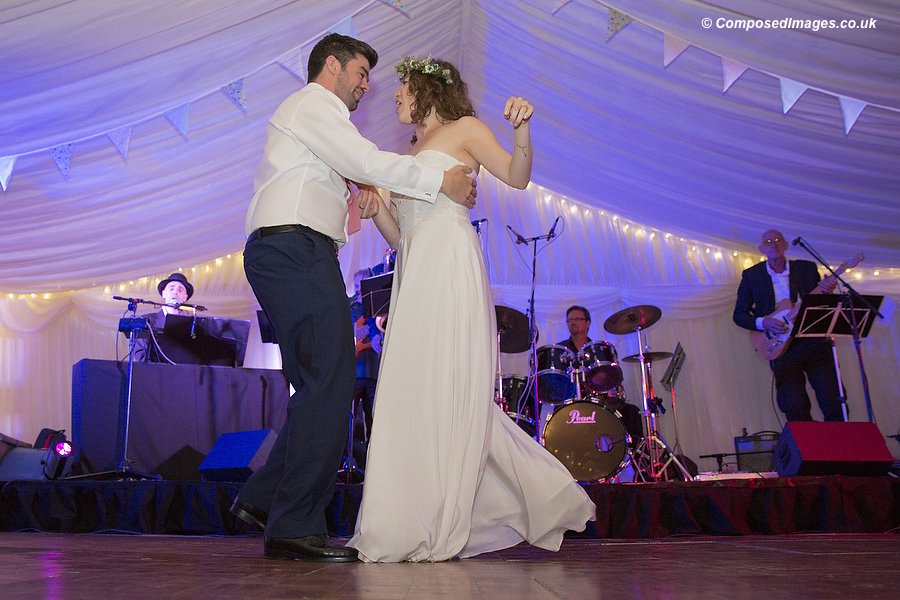 Then came more dancing, more drinks, candles and the now popular sparklers, before I took my leave of Oxfordshire and headed back west. Congratulations once again to Kate and Teddy, and thanks for asking me to photograph your wedding. 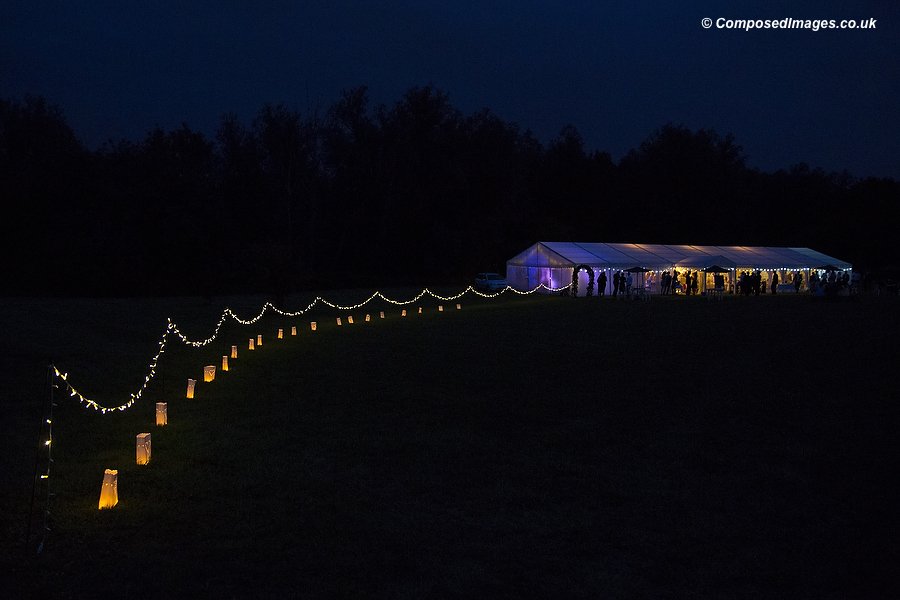 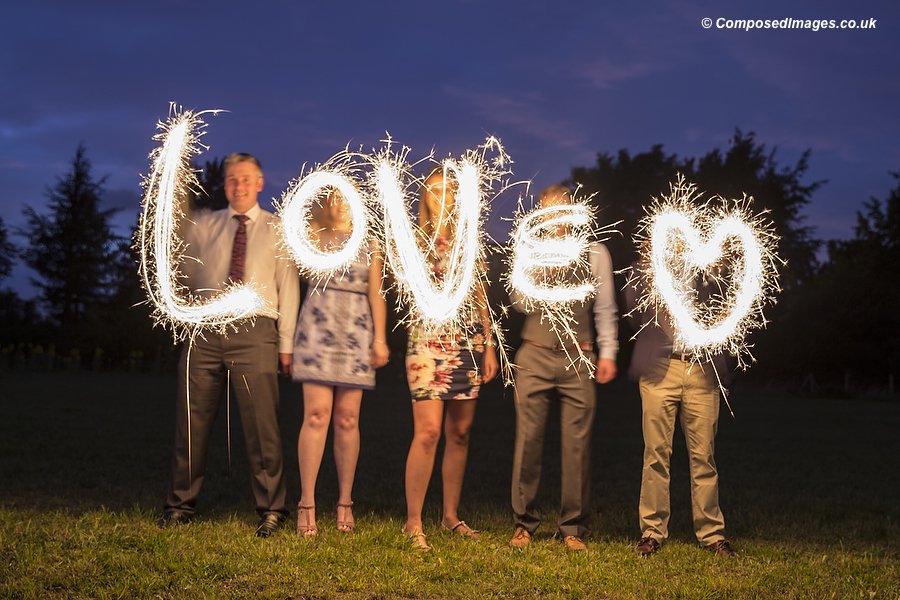 Please get in touch if you’d like a wedding photography quotation for 2016.

[…] were weddings in Gloucestershire and Oxfordshire, as well as a commission at Celtic Manor Resort’s Ryder Cup golf course for Telegraph Media […]