Never stopped me dreaming – on mostly not photographing Euro 2020 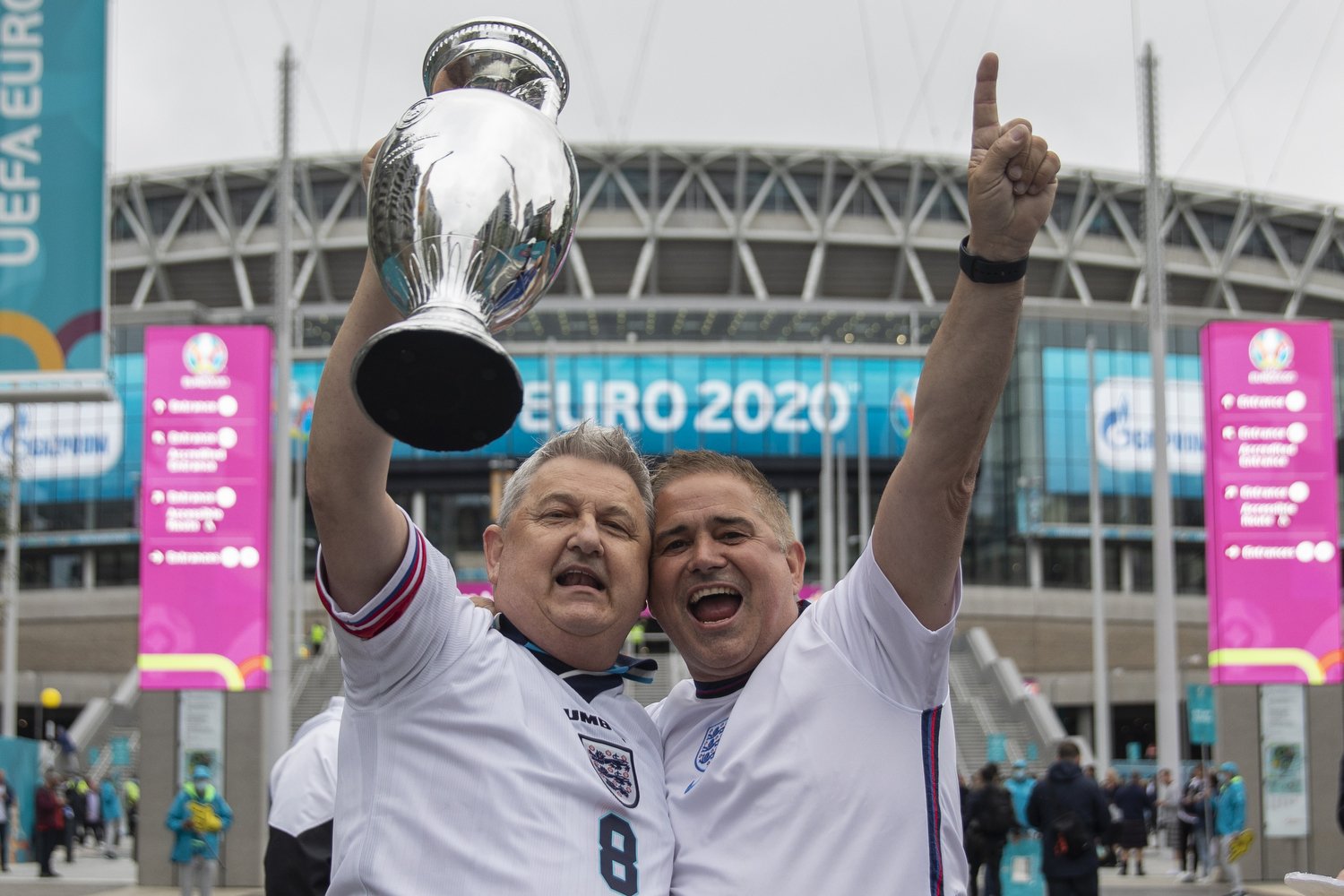 Six of my seven Wembley match applications had been flatly rejected by UEFA over the course of the tournament. But of course I applied for the Final, Italy against England, because I could.

My chances were incredibly slim, to photograph what would be the biggest football match of a generation, the biggest match I would ever shoot. But still that slither of teasing hope remained.

Maybe some sort of administrative glitch, of the kind which helped me sort of fluke my way into the 2017 Champions League final? Maybe some kind of wildcard lottery system? Maybe if I just thought positively this time? Strange how we cling to superstition at times.

I’d gone through this before of course, for England-Germany and England-Denmark. And games not involving England. All predictable disappointments, although I had quietly allowed myself to hope and dream. But what if..?

If I could somehow get the Final, all would be forgiven. Just imagine seeing that acceptance email pop into my inbox. Would I cheer, or cry, or be shocked into paralysis? Envisage success. Some athletes swear by that. Picture it. Where would I be when I received that email? In a shop, in the car, in the house.

Friday evening, walking the dog round the park. Go on then. Yet another check of the inbox… ‘Checking for mail…’  Aaand, there it is… NOT ACCEPTED.

Of course. It’s over. Dream dead.

The hope that kills you

For much of the tournament I had lived with those little slithers of tantalising hope, never fully knowing until around 48 hours before kick off if I would embark on another long London day, another big effort.

How could I not flirt with the idea that it might happen? It was mentally unsettling. But ahead of each Wembley match, that same standardised NOT ACCEPTED email message eventually landed.

The only acceptance arrived in my inbox well before the tournament started. It was for the much hyped England-Scotland group match. In truth, I had been surprised and elated and even mildly embarrassed to receive that. There were many harder-working and generally better sport photographers than me who wouldn’t have accreditation for any game.

And I hadn’t even photographed many domestic matches over the course of the previous season. Perhaps half a dozen. My trust in the virtually unregulated media ecosystem surrounding football photography has never been lower, so I reduced my speculative efforts altogether and only took on a match if a match fee was involved. Photographing a match ‘on spec’ often involves a lot of time and effort for no guaranteed reward. Sometimes it can be fun, and an interesting creative challenge. If it’s a decent game and the weather is ok. Often it isn’t.

Since starting in 2013 I am glad to have done it for a decent period. But for the last couple of years it feels like every match could be my last. There have been gaps of several months between games, but it keeps luring me back.

It hadn’t occurred to me to try applying for Euro 2020 matches until I received an email from UEFA in late April, saying I had been put on a priority list by the Football Association of Wales. That itself was pleasantly surprising, given that I’d been rejected for most Wales matches in recent months, Covid restrictions not helping matters.

But I needed to reactivate my UEFA profile, dormant since 2017. There were a few other hoops to jump through, including proof of recent publications, but jump through them I just about did. Then there were many Covid related forms and requirements.

After being accepted for England-Scotland, why couldn’t I be accepted for more? With the group stages complete, I went ahead and applied for every other match held at Wembley. But rejection followed rejection, match after match.

I queried the selection criteria after the semi-final rejection and received a standard copy/paste reply saying “the decision making process on match attendance arbitration is based on a consultation with the Participating National Associations and relevant stakeholders”. This made me wonder if I was accepted for the Scotland match in error, if someone in a UEFA office in Switzerland thought I was on a Scottish FA list, rather than a Welsh FA list.

Still, the process seemed questionable. Certain other photographers from agencies outside the esteemed top tier pool seemed to be accepted, match after match – including those not involving England, and those with no obvious affiliation to any national association. There’s a beautifully convenient vagueness to ‘relevant stakeholders’.

It’s probably not worth dwelling on the complicated politics of it all, although many do.

For all the disappointing rejections I should instead focus on the fact I photographed one game. Especially when I hadn’t anticipated photographing any. 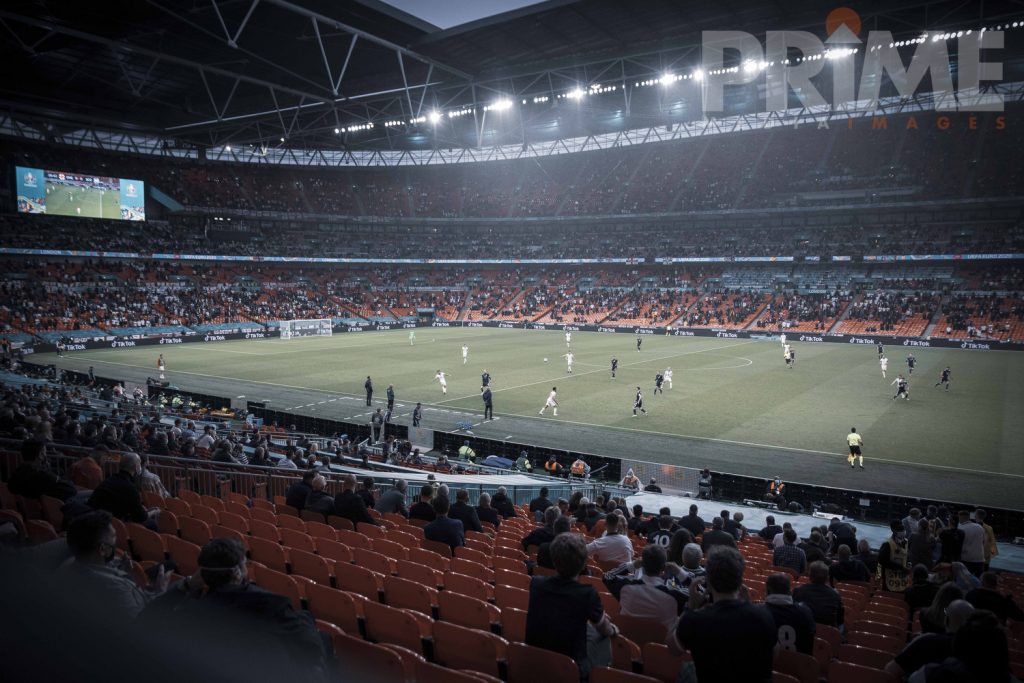 It turned out to be England’s lowest ebb of the tournament, notwithstanding the events of tomorrow’s final. This was a goalless draw which England could have easily lost 1-0 or won 1-0. It was the only England game of the tournament I didn’t closely watch on television, but through the viewfinder I could still sense the hollow frustration, the generally confusing dullness. 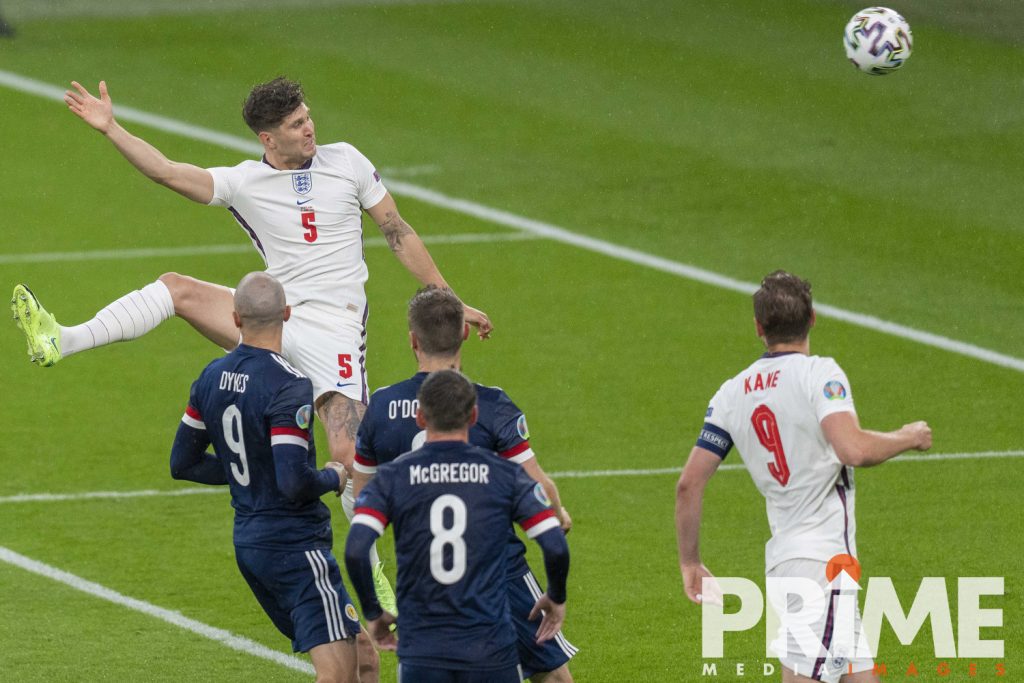 John Stones of England hits the post with a header during the UEFA 2020 European Championship group match between England and Scotland at Wembley Stadium, London, England on 18 June 2021. Photo by Mark Hawkins / PRiME Media Images.

As a photographer you desperately wanted an iconic moment like in the 1996 Euros, which the hype to this match was full of. A Gazza moment or dentist’s chair goal celebration. England’s Phil Foden had bleached his hair for the tournament like Gazza’s was back then, in homage. 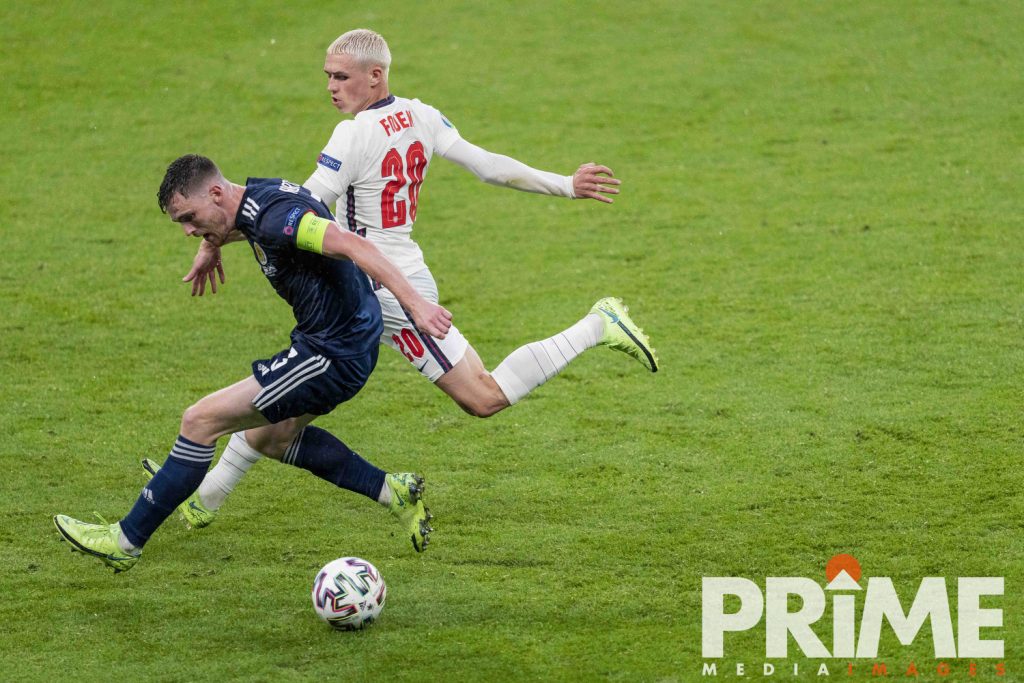 But it finished an underwhelming 0-0, with not much of note happening across the whole 90 minutes. 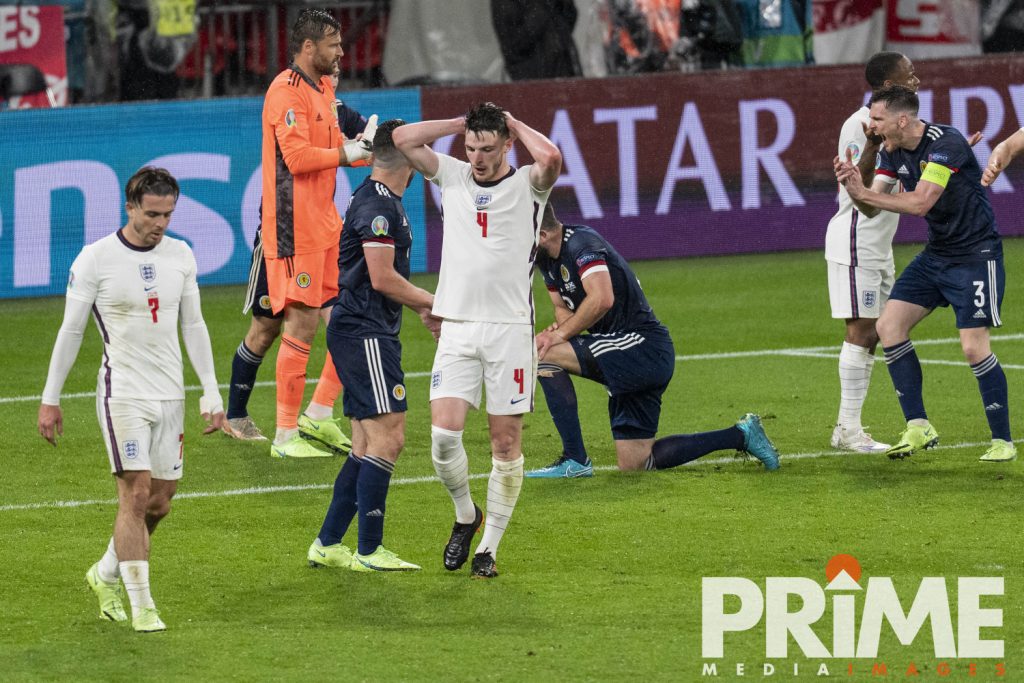 Scotland fans were ecstatic with their point. “We wan nil nil!” one cried as he left the stand near me at the end of the game. 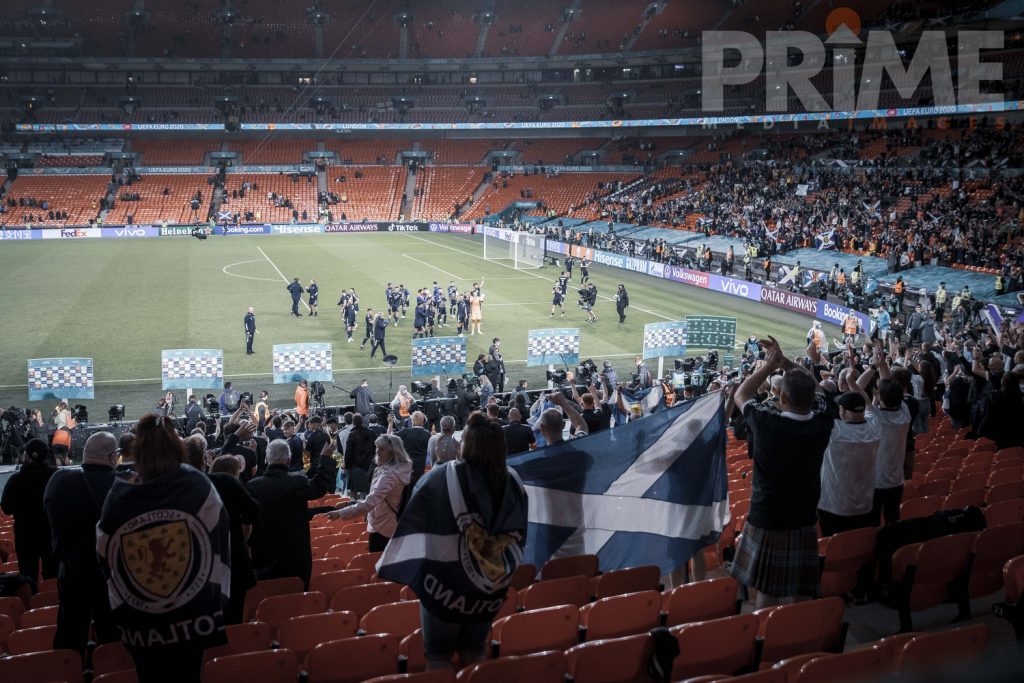 As well as the damp squib of a match, my hayfever was awful, embarrassing and exhausting from start to finish of a long and snotty day. This made doing everything twice as hard. Luckily I didn’t have to edit and file pictures live, thanks to one of the Prime agency bosses, who also kindly loaned me some superior Sony kit for the evening.

Wales played two matches in Baku, Azerbaijan, one in Rome and one in Amsterdam. I didn’t apply to photograph any of their games due to travel costs. The tournament has been grossly unfair in demanding that some sides travel quite ridiculous distances across the continent, while others have barely travelled at all. A UEFA official recently conceded that it hasn’t worked and won’t be repeated.

On  the Saturday of the first match I took a walk into town an hour or two before kick-off, before returning home to watch the game against Switzerland.

I contacted a few big screen venues in Cardiff about photographing fans for the Denmark game, but was politely declined or ignored, so that was that.

Despite having lived in Cardiff for most of my adult life and photographing the national team a considerable amount since 2013, I never quite feel Wales games as much as England games. I always want them to win. But win, lose or draw, I don’t feel it like England. Especially in major tournaments.

That’s because of the emotional tethering. You remember your formative years and how it made you feel, for me in 1990, 96 and 98. And of course in 2006 as a fan, when I was a heartbreaking penalty shootout away from a World Cup semi-final ticket.

It’s well described by Gareth Southgate in an excellent Players Tribune piece. The feeling is incredibly powerful when you are young and when the emotional pain of elimination is embedded in your brain. Your brain remembers and associates. Hence the general explosive outpouring after the England-Germany match this summer. So many people have painful England-Germany memories. And largely painful England memories over the years, hence the continued popularity of the football song Three Lions, by Skinner, Baddiel and The Lightning Seeds.

Tomorrow could well deliver more pain, after such tremendous hype. Or it might not. Either way, this England side has truly distinguished itself, through its actions both on and off the field. 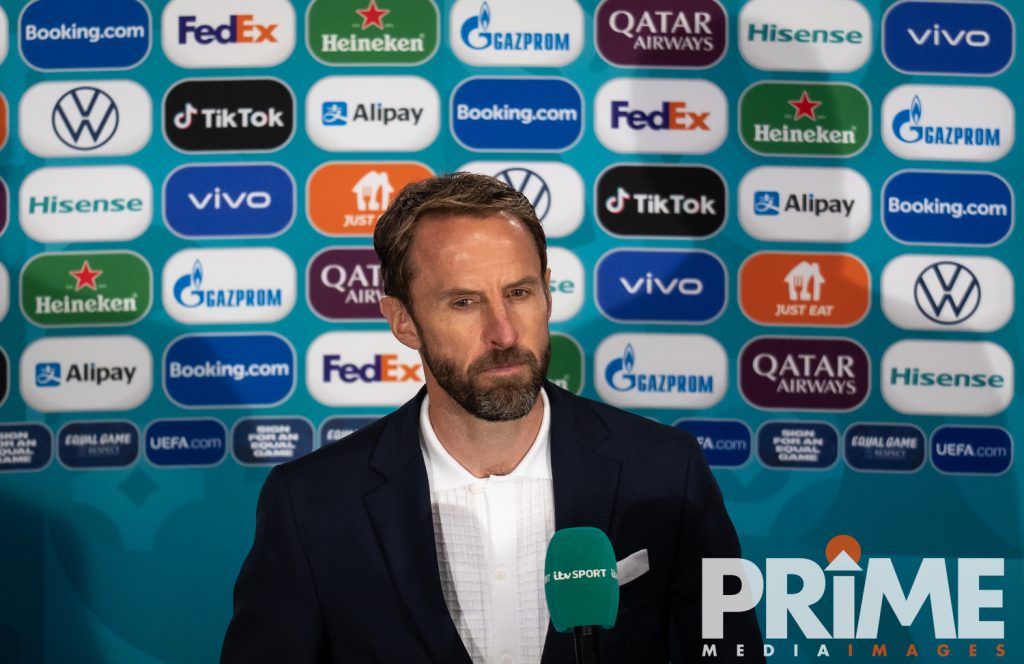 In these heady days between semi-final and final, the newspaper front pages have been full of images of captain Harry Kane and manager Gareth Southgate. England has much to be proud of in its players and manager, beyond the football. Marcus Rashford, Raheem Sterling and Jordan Henderson have each led high profile initiatives involving children in disadvantaged areas, and racial inequality. The players have already said they will donate some of their prize money from the Euros to the NHS. Despite being told to ‘stick to the football’ by some, they are refusing.

Of course there is, and will always be a less desirable faction of supporters. Those who boo the opposition side’s national anthem, those who boo players taking the knee, those who use a laser on the face of an opposition goalkeeper before a penalty is taken, as happened to Denmark’s Kasper Shmeichel. It sadly appears unavoidable due to the popularity of the sport. We can only hope that they will be drowned out.

Go well tomorrow, England. I’ll be back on my sofa again, wishing I was there.