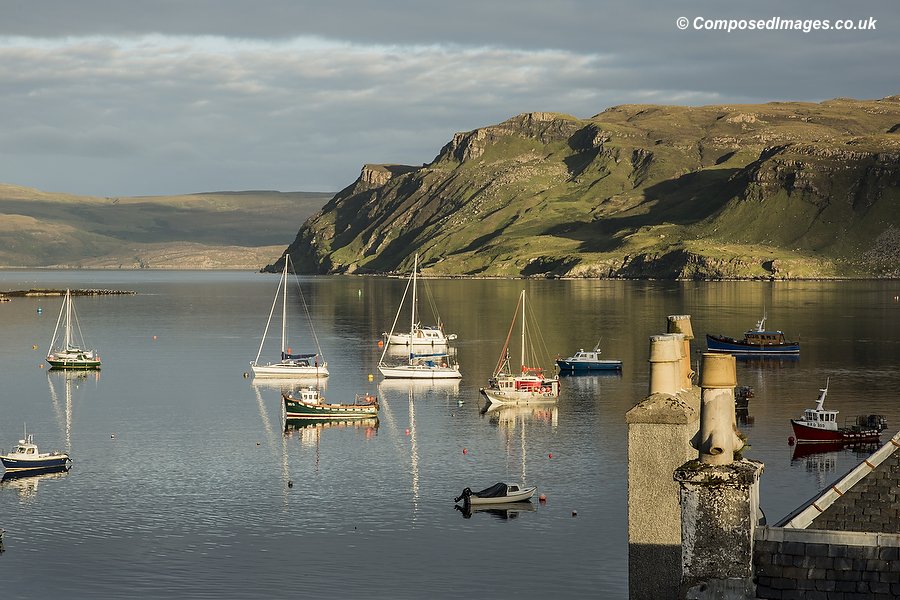 Portree is the capital and largest town of the Isle of Skye. A pretty town and obvious epicentre for tourists, it has a quaint harbour that provides several boat rides a day. I see from the Wikipedia page that “Around 939 people (37.72% of the population) can speak Scottish Gaelic” but let’s not be too specific about that.

We took a short walk around the town to see what it had to offer, stopping briefly for a coffee at The Granary Coffee shop and Restaurant on the town square – a traditional feeling place with some lovely artwork on the walls. This old timer sitting alone with his pot of tea and newspaper was screaming to be photographed as I sat down. I loved the chaotic crisscrossing effect of the window and door frames combined with a favourable bright morning light, and couldn’t resist a quick effort. It’s not perfect but I still like it. 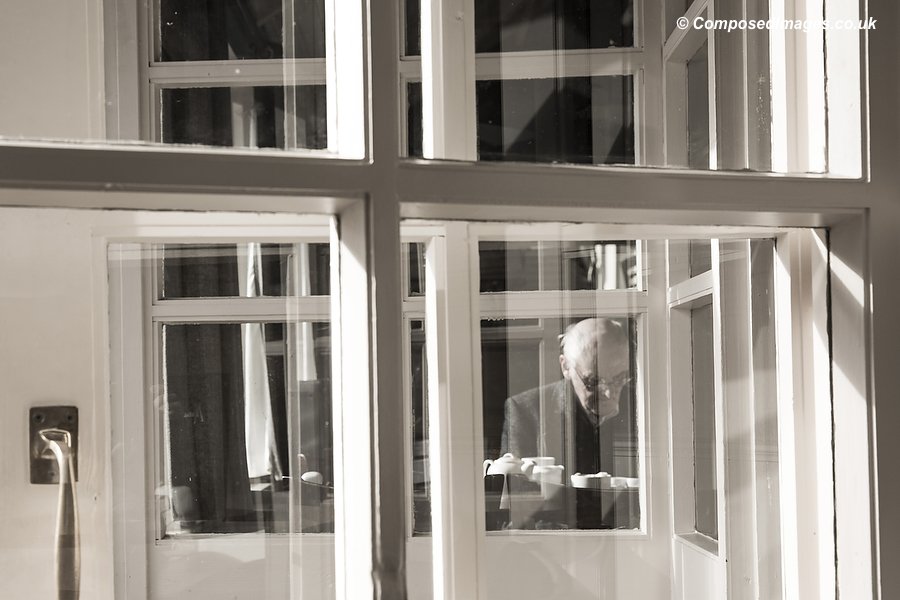 We bought and sent a postcard home before driving further north along the Trotternish Peninsula.

Uig turned out to have a much more industrial, lived-in feel, not especially shaped for tourists. A working ferry port on the sheltered inlet provides links to other outlying islands and the Outer Hebrides, while a pottery, Uig Pottery sits on the beach and welcomes visitors. 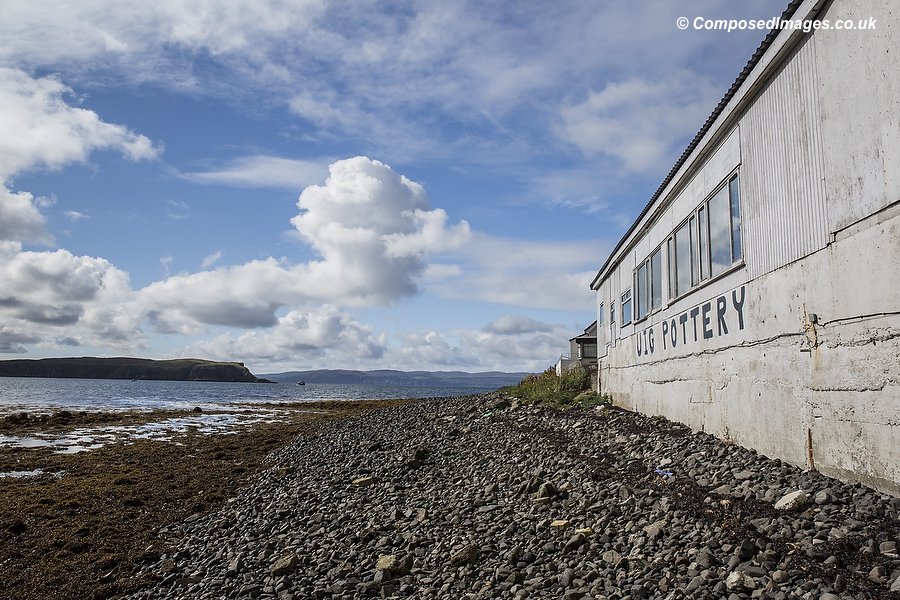 Travelling further on around the west side of the peninsula I was reminded of a similar Atlantic-facing north westerly tip of Northern Ireland, which I’d visited several years before. Both landscapes wear a submissive, Atlantic-battered and beaten back appearance. They each have a romantic sparsity not shared elsewhere, in places where the land rises and falls with a more obvious style of jagged drama. On these wind-whipped scapes there’s a kind of amusingly admirable cheek, or even petulance about the one or two tiny dotted houses sitting all the way out there alone, unmoved, braving the elements. We need nothing and nobody; now go away, they seem to say. 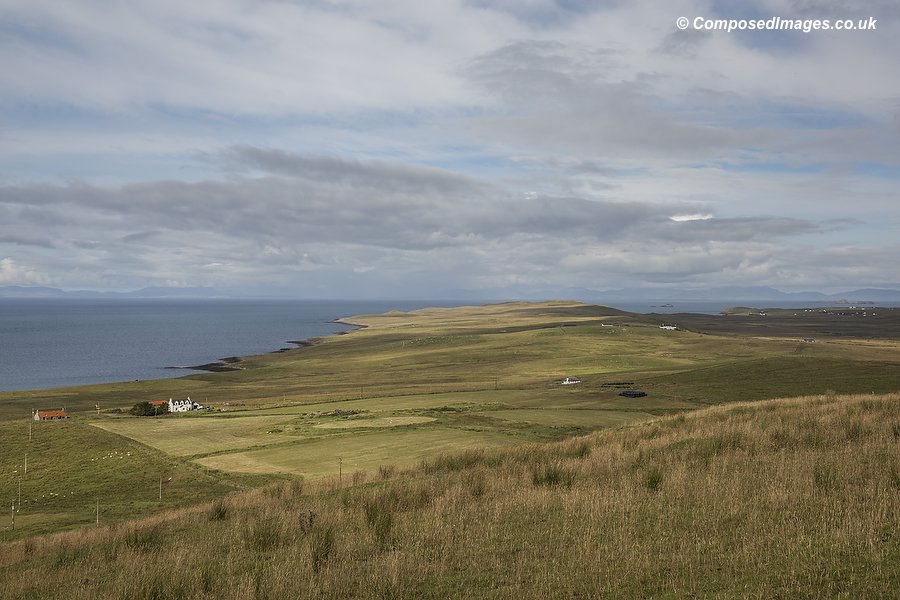 Marked on the map as a place of interest is Duntulm Castle. It’s said that during the 17th century this was the seat of the chiefs of Clan MacDonald of Sleat. The MacDonalds are a pretty big deal in these parts, particularly Flora. More on her later. Now the Castle lies in ruins, a warning sign on a gate requesting that visitors don’t proceed and poke around in the grounds. 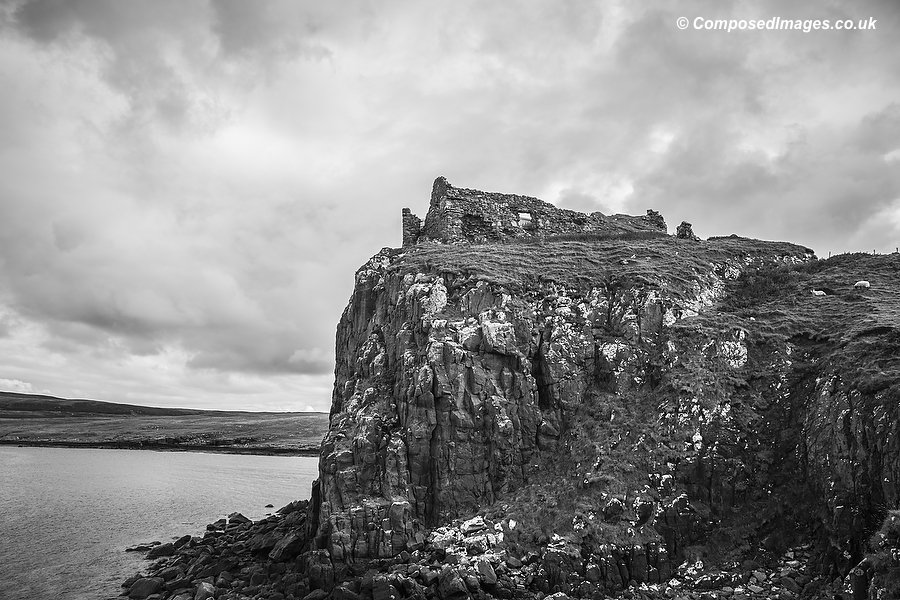 There was a certain bleak charm in its weathered endurance sitting there on the headland, but equally entertaining were the rockpools it overlooked.

Continuing our coastal meander, we alighted next at Staffin beach. A narrow winding, coast hugging road had delivered us into a small, inauspicious car park next to a pier, where a lone fisherman fished. There was something about how the light was playing through overcast clouds that I liked, as well as the array of textures and levels reflecting wear and age and natural life over the passing of time. A touch of desaturation often helps to add a dreamy drama. 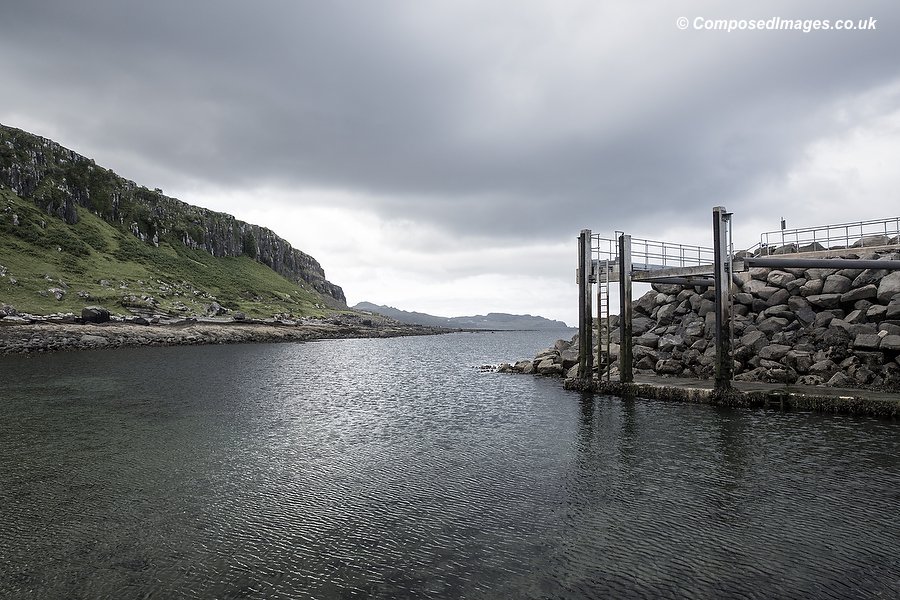 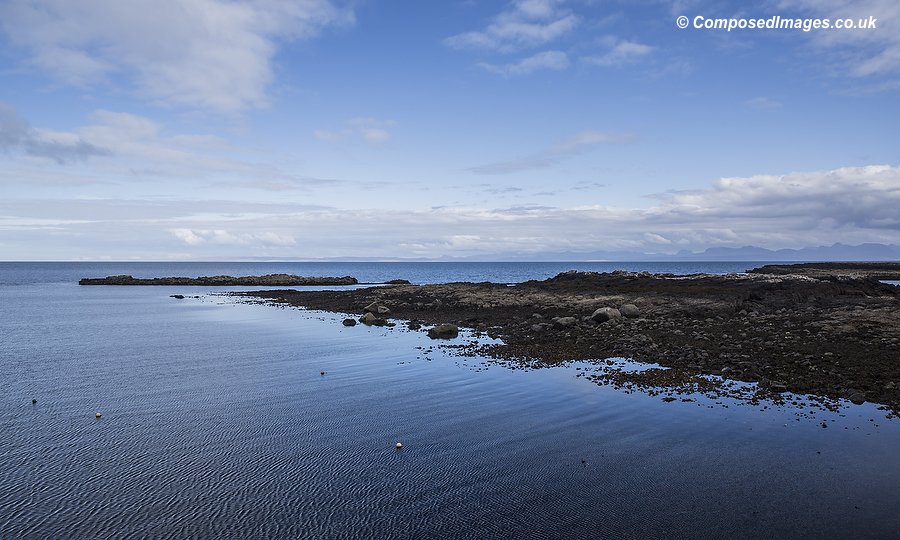 This robin and sheep looked appeared to invite us to leave, so we travelled onwards to what would be the obvious stand-out excursion of the day. 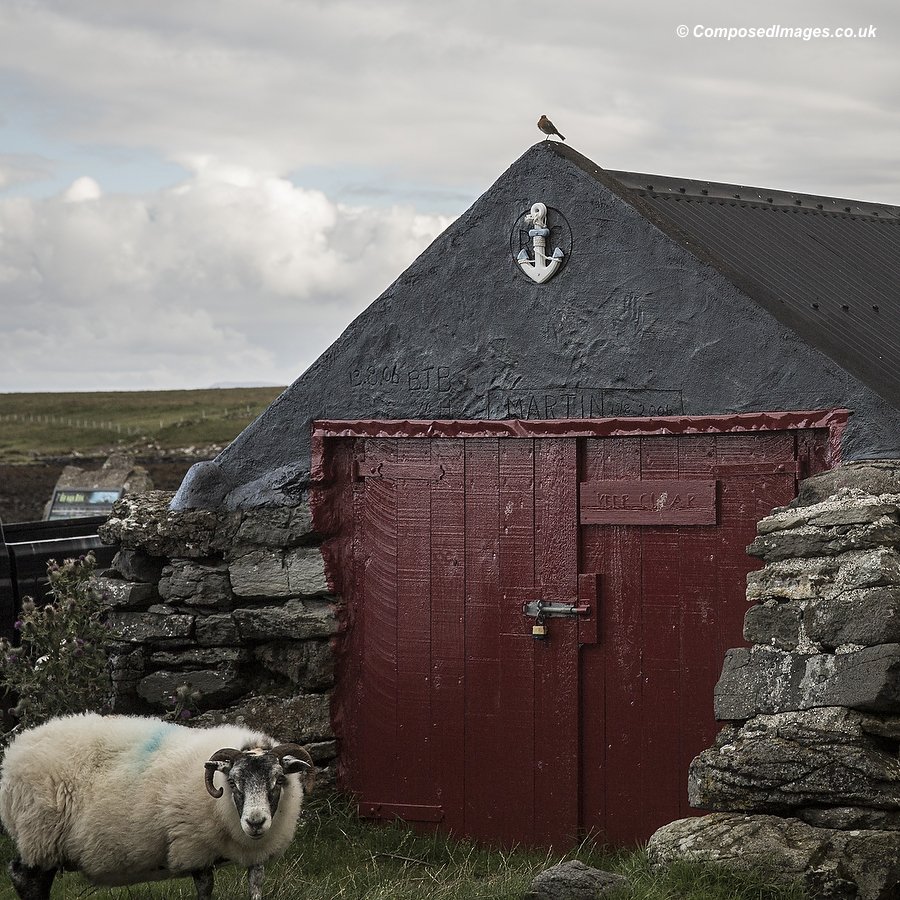 The Old Man Of Storr

We saw a man by the side of the road pointing his camera upwards before we realised what it was. The mysterious looking rock formations half way up the side of a mountain were remarkable, even through grey murk, almost human in basic dimensions. From the roadside several hundred feet below they were beguiling and, as it proved, magnetic.

We parked at the end of a vehicle queue before the gated entrance to a sanitised footpath leading up the mountain, and decided to take the hike. 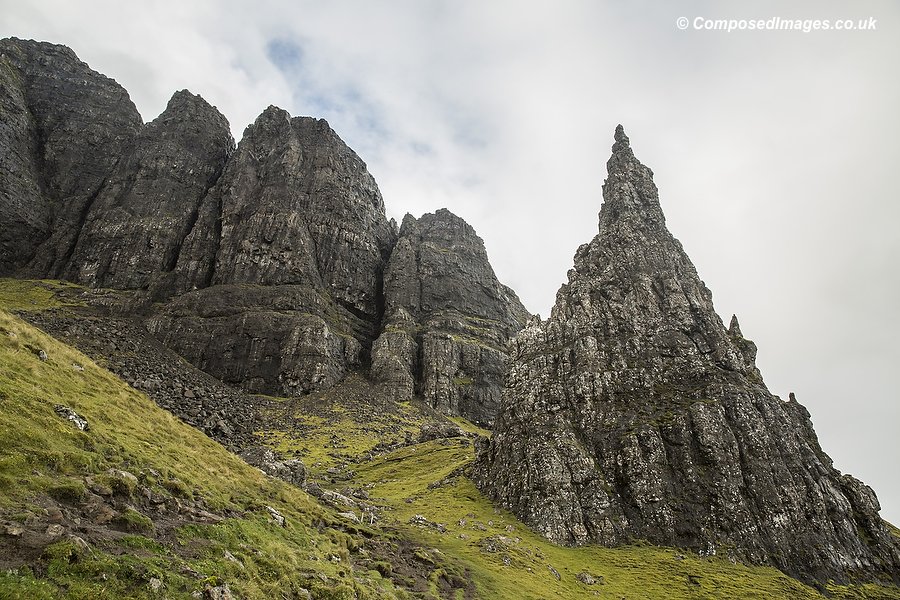 People fled down the path as we climbed it, and we overtook several parties on the way up. It seemed like a busy trail, a kind of touristy thing to do. And yet when we reached the famous rocks we were both mildly alarmed and gently exhilarated to feel quite alone up there. Nobody else was around. Was there a strong weather front approaching that we hadn’t heard about? Ah, who cares? 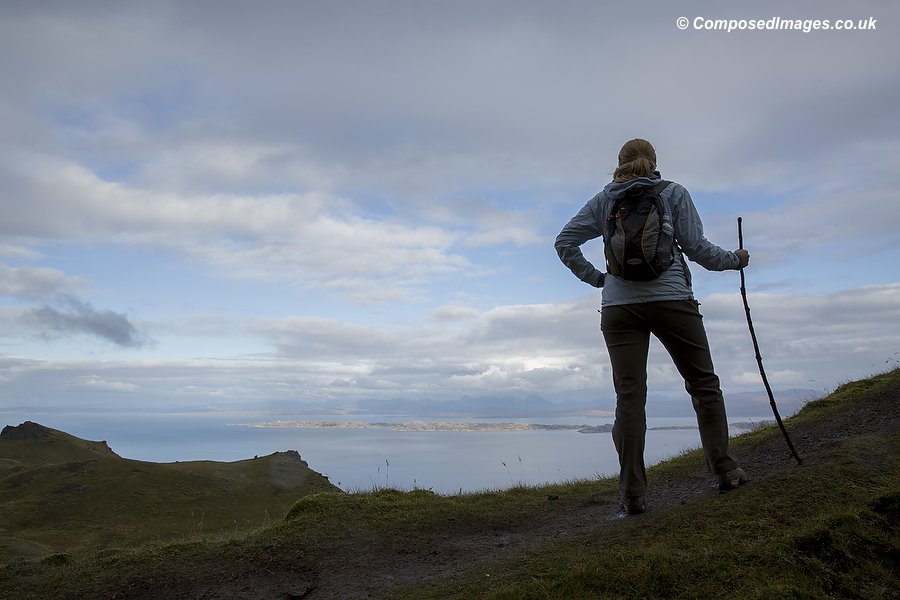 This was in all senses of the word ‘awesome’. At the Old Man of Storr there is a sense of other-worldliness, or at least other-continentliness (it’s not a word, I know). How the stones are shaped and curved like temples and how the landscape appears neatly layered: it conjures images of Peru and Machu Picchu – although I’ve never been. 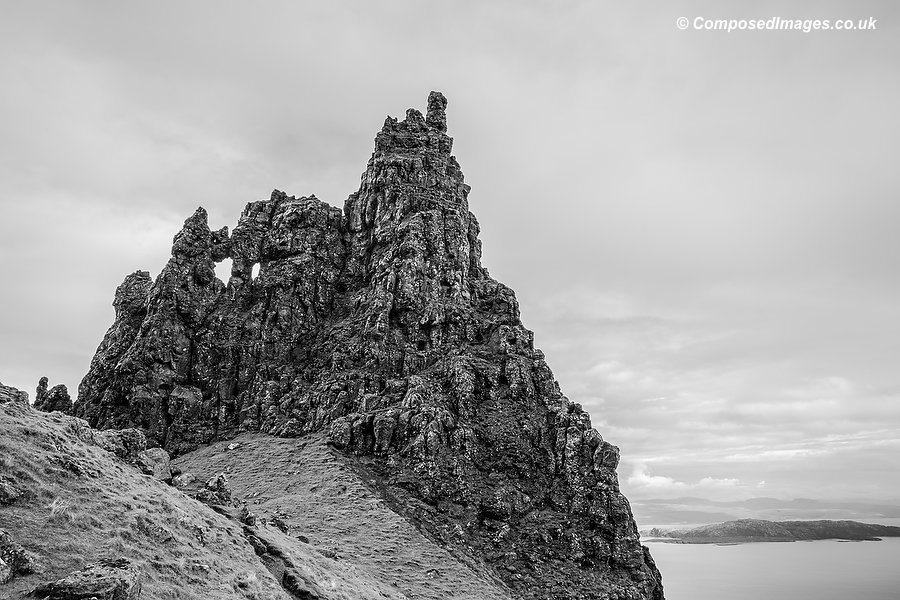 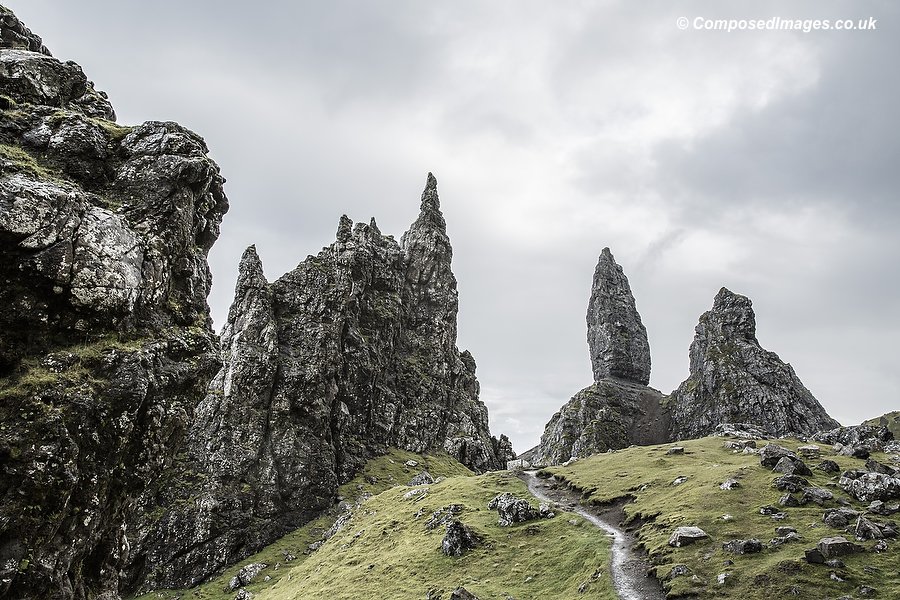 The ‘Old Man’ of the Old Man of Storr apparently lost his head in a heavy storm several years ago, but to me his near neighbour looked like a kind of horned beast aggressively giving the finger. 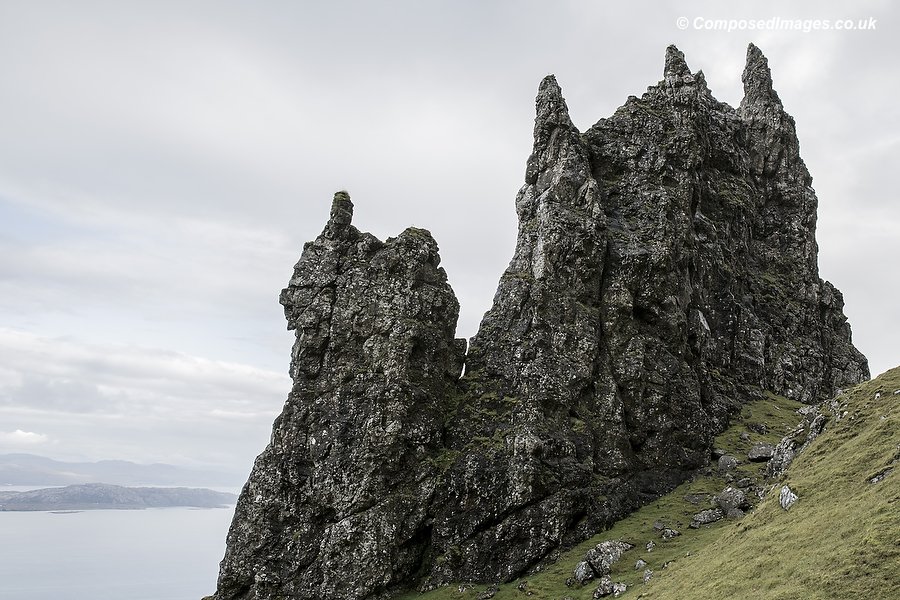 Scrambling up to a higher point on the rocks affords one of the most breathtaking views you can see from the Isle of Skye, and possibly the whole of Scotland. It spans over lochs, ocean, and more mountains far into the distance and back onto the Scottish mainland.

You need an indefinite amount of time to take it all in. It’s difficult to describe without recourse to the tired overused words of a generation: awesome, epic. Sometimes words can’t really do it justice anyway, not when faced with natural landscapes like this. Maybe you shouldn’t try. It demands you to be quiet and appreciate it. Here are some more pictures. 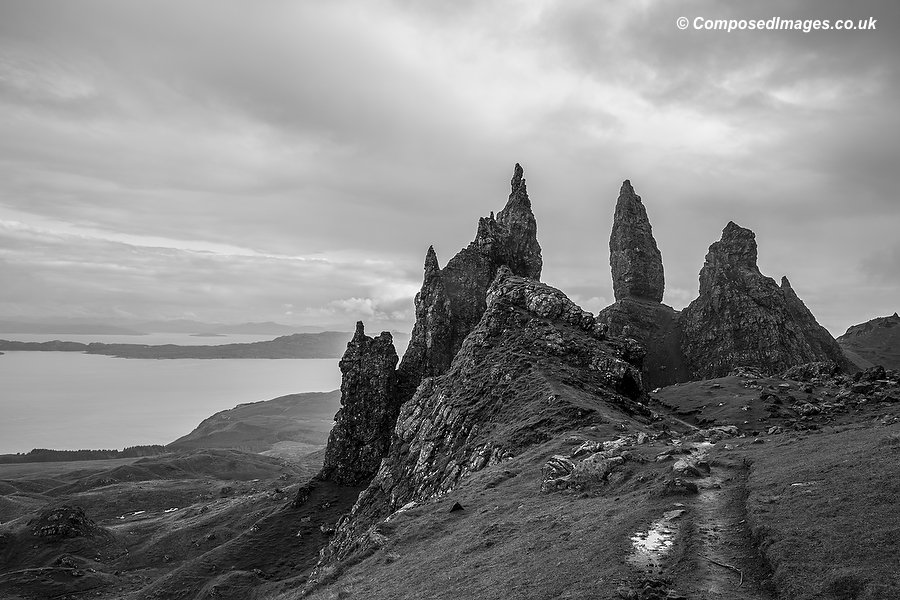 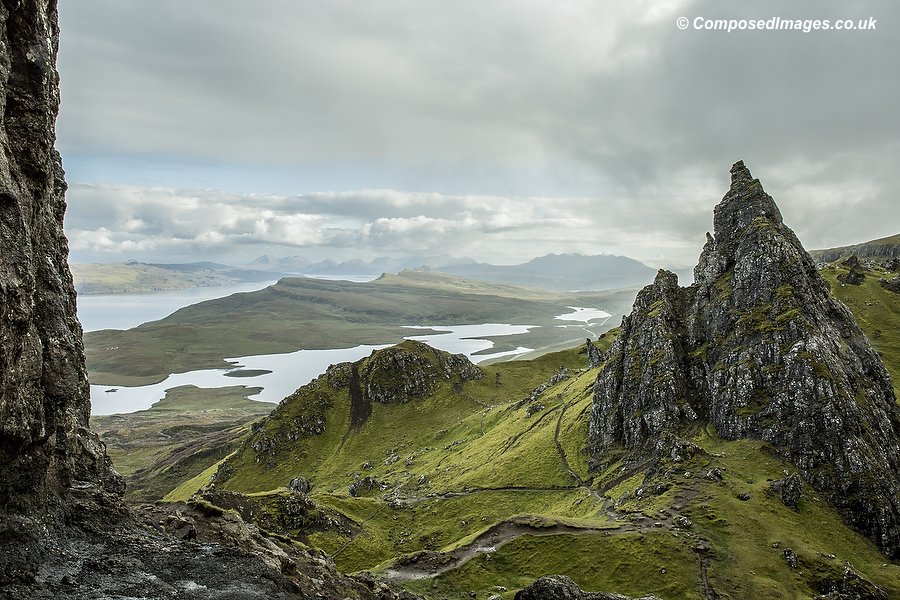 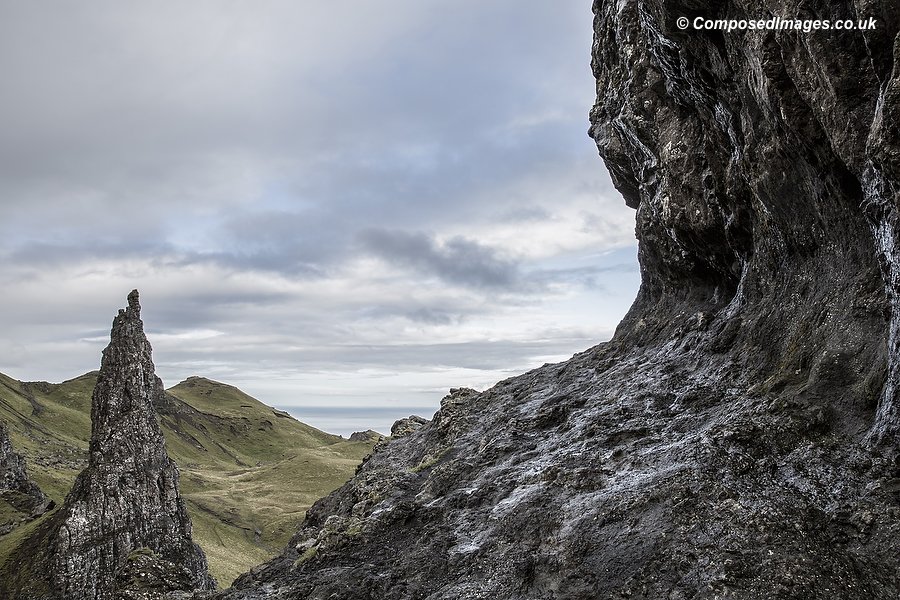 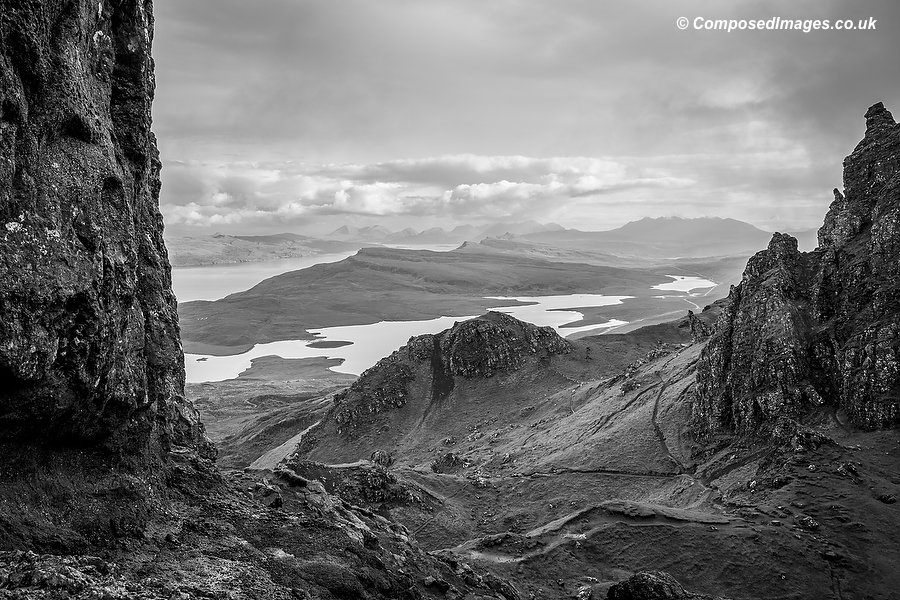 In the next Isle of Skye blog post we visit Dunvegan Castle, Neist Point and Sligachan. Please get in touch if you’d like to commission Composed for travel photography or travel writing.