A festive photo walk around London 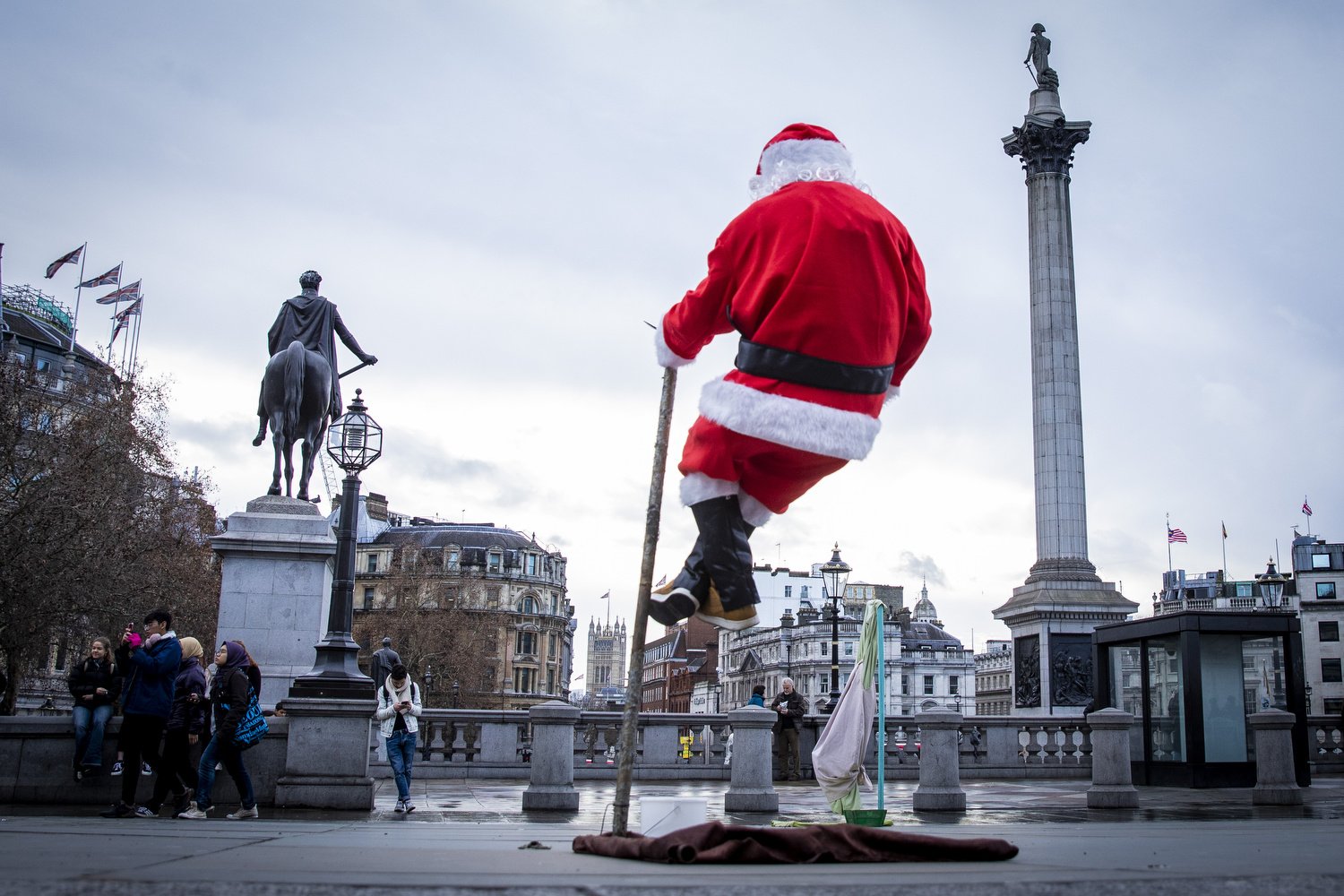 On December 19th 2018 I took myself down the motorway for a short but intense day trip of London photography.

It had been a while since I’d visited and my feet had grown itchy for newness and difference. London is a sprawling, diverse city which I love, and where I lived for about three years between 2007 and 2010. I wanted some London of this Brexit obsessed era in my camera.

My London street photography walk began from Piccadilly Circus. It was from this tube station that I’d most often emerged into the centre when living here. There’s usually one initial reference point we have when beginning to piece together a new city. Piccadilly Circus was mine, a maddening whirlpool of people and big screens and neon lights, somehow never quite as glamorous as when you see it in films or on the television.

I headed through Leicester Square to Trafalgar Square, before strolling down Whitehall to Westminster.

There’s a striking poetry in Westminster appearing so ugly, structurally unsound and sort of embarrassed by itself right now.

With Brexit chaos apparently unending and political controversy a regular occurrence, the layers of maintenance scaffolding and construction work around the big clock accurately reflects a messy state of general unrest.

Protesters gather outside the Houses of Parliament on an almost daily basis. Most of them are currently concerned with Brexit, but not all.

Over the river there was a lighter, calmer, more carefree atmosphere. I walked a short distance down the South Bank, past the London Eye, before crossing back over the wonderful Hungerford Bridge, another favourite stretch when I used to walk into the city from Waterloo Station.

The compact dimensions of Villiers Street lead up and away from the river, towards Charing Cross. Here it felt like Christmas was in full flow, with office parties and gatherings in pubs, and brass bands playing on the street.

I briefly considered a browse of this photography gallery, then decided against it, heading on up the Strand a short way before veering into Covent Garden.

The weather was extremely kind on this day, following a spell of squally grey and rainy weather across much of Britain. And now the slow-burning golden winter sunlight was reaching its peak, embalming tips of buildings and faces passing through Covent Garden Market. A number of shots frustratingly got away here but a few were grabbed, including the reliably effervescent street entertainers.

This flamboyantly lit doorway was a disgustingly obvious ‘Instagram me!’ shopping attraction, but I was pitifully weak and failed to resist.

Back into Trafalgar Square, a group of carol singers were providing some entertainment at the bottom of the large tree, where a couple of hairstyles caught my eye.

A shopfront under construction and bathed in red light on Charing Cross road illuminated some bored looking workers engrossed in their phones. A better shot would have taken in more than this single bloke.

There was time enough for one final loop around Chinatown, before I was swallowed down into Piccadilly Circus, heading back west to photograph the League Cup quarter final match between Chelsea and Bournemouth.

Renewing my acquaintance with the capital and getting a change of scenery felt like a much needed creative refresh. London street photography is a subject that will never fail to inspire.

Cameras and people with cameras are so boringly ubiquitous there, such is the heaving population of tourists, you always feel like you have licence, like you are always comfortably camouflaged, forgettably blended in. You are just another dull tourist, another dull photographer.

Great to see you, London. Mind how you go.

Order my street photography photobook published by The History Press about the Canton and Pontcanna areas of Cardiff via Amazon. Read more about it on a blog post here.