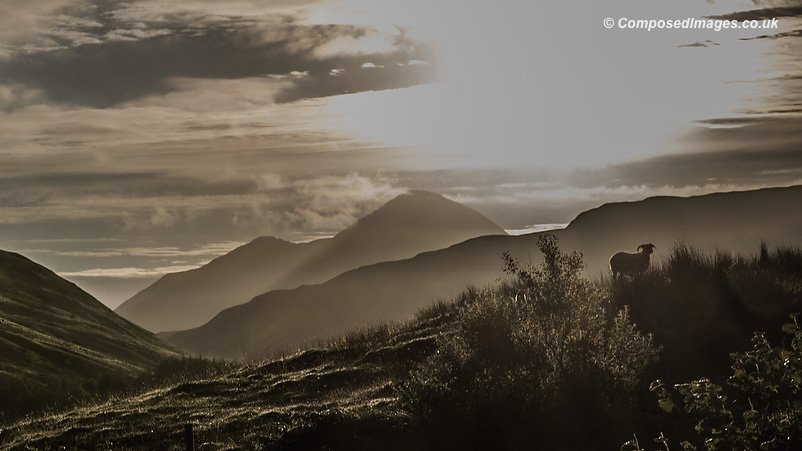 Dunvegan Castle is a stand-out tourist attraction on a north western tip of the Isle of Skye. We saw numerous leaflets about it, it’s boldly marked on every map, it has a long and grand approach after you pass through the small town of Dunvegan itself, leading to the car park. There’s another long and stately approach once you’ve paid the admission fee at a hut outside, and are fed through gardens towards the building itself.

But for all the pomp and build-up, we were ultimately a bit underwhelmed. 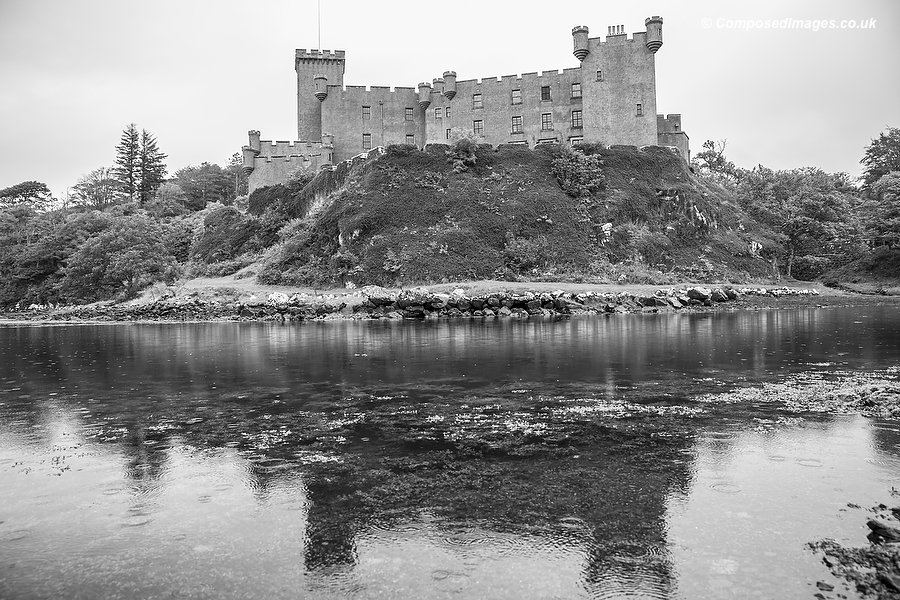 The Castle is the seat of MacLeod of MacLeod, chief of the Clan MacLeod, and it’s said to be the oldest continuously inhabited castle in Scotland, a stronghold of the chiefs of the clan for 800 years. It’s a place with a very proud history and grandure.

All tourists are asked not to take photographs when met at the door by polite staff, because the family still live here. Although one large section of the building was undergoing serious renovation, we came remotely close to anything that looked like genuine living quarters or anyone who appeared like they might actually live there. Still, we nodded and smiled acceptingly, not fully understanding.

You browse through rooms maintained in certain periods, and survey big old portraits on the walls, books and olden military artefacts.

“Ach, the tableclooths coming off,” remarked one of the floating members of staff to a colleague as she looked out the window. I exchanged a glance of puzzlement with a fellow visitor, trying to decipher what she had meant. When looking out of the window I realised she meant the cloths of mist lying over the distant peaks. I also gleaned that it’s apparently pronounced locally as ‘Dunveggen’, rather than ‘Dunveegan’.

[Read the Isle of Skye travel post: Reaching The Skye]

Having lived in Cardiff for most of my adult life, a city with a properly decent castle in the middle of the city, perhaps I am spoilt. This didn’t appear much like a proper castle; more like a large stately home of a certain period, or various periods, with some turret-like, conical fixtures attached to the corners of the roof. You couldn’t readily imagine it in the heat of battle, being used for matters of urgent territorial defence. That the castle is today formed of at least ten building periods perhaps offers some explanation.

Dunvegan Castle’s grounds boast a number of colourful and well-kept gardens – probably interesting if you’re into that sort of thing, while seal watching boat trips are advertised further down the site. We went exploring the grounds overlooked by the castle, weaving between trees and skirting rocks out towards an expanse of bleak grey water. 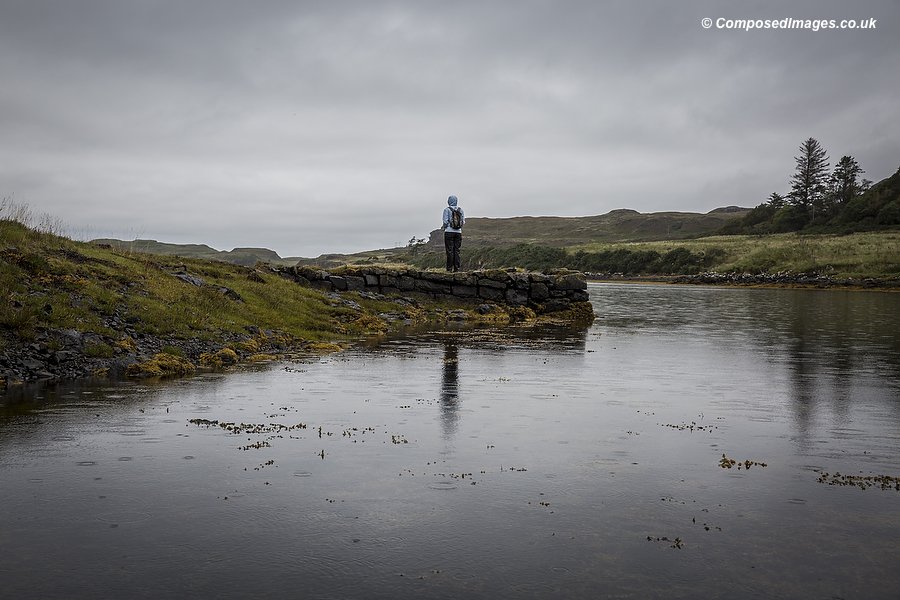 As we stood there in the drizzle, peering against a light breeze into the blankness, jarringly loud sploshing came from the water nearby. Not fish, not human. Finding towards the source, we found softly rounded eyes staring back at us, as if we were a source of equal intrigue. 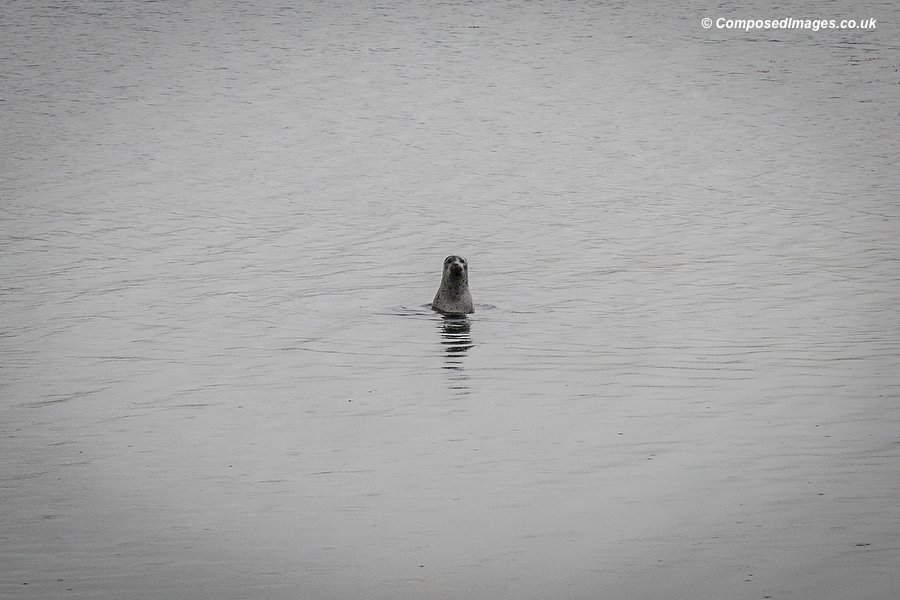 How could you not be quietly thrilled to stumble across sea lions like that? There was a dog-like quality to the sea lions’ size, an open playfulness and charming inquisitiveness about them. They understandably tired of us boring humans in a few minutes and swam off.

Later that day we took what felt like an exhaustingly long and winding, up and down drive to the most westerly point of the Isle of Skye: Neist Point. Initially unsure what exactly there was to explore, we parked at a small car park near a small empty building, seemingly ready to be transformed into a café of some sort. Beyond that we found a concrete path of knee-testingly steep steps downwards, leading to a path which snakes up and over headland, finally ending at Neist Point Lighthouse. 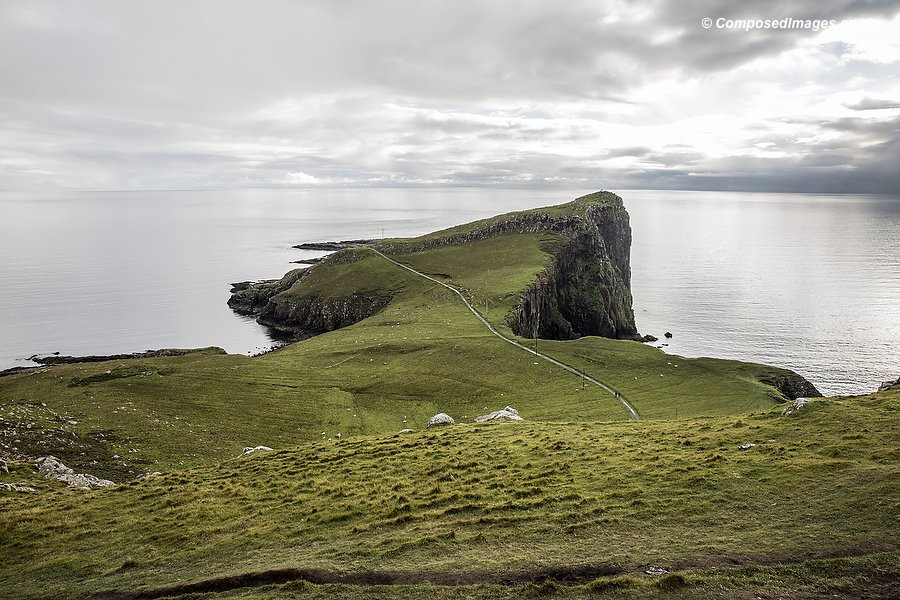 From a distance the lighthouse looks well maintained and active. But the grounds around it appeared partly derelict. Confusing signs warned against entry into the ground but these were downtrodden and a couple of other tourists were in there so I followed, like a dumb tourist sheep.

I’m not really a lighthouse aficionado. It was an ok lighthouse. Wikipedia says it was first lit on 1 November 1st 1909 and is now under private ownership. Never say I don’t do my research, blog reader. 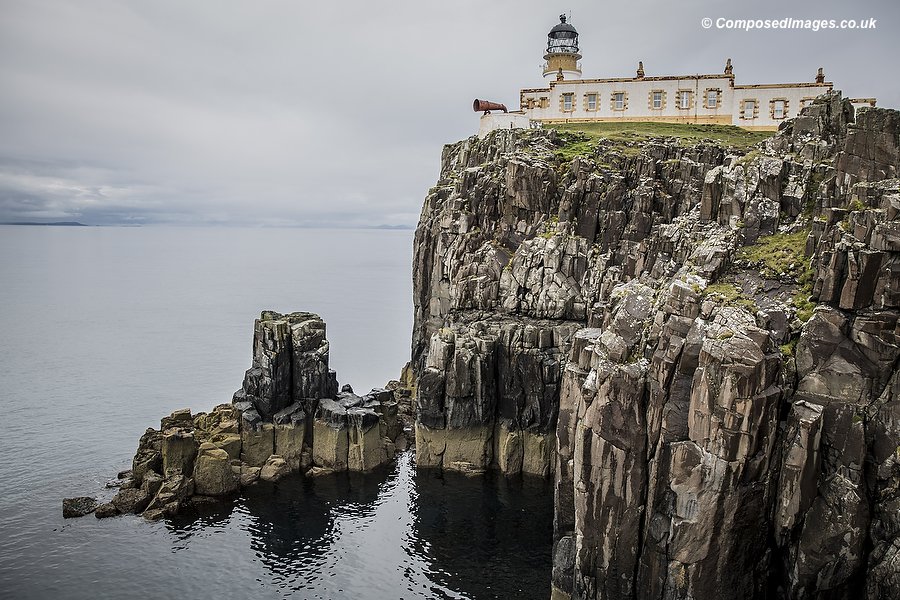 On returning and posting an image or two to Flickr I found another tourist who had been there around the same time had captured a much better image than me. By walking a little further around the overlooking headland near the car park, he was able to frame the whole outlying hump of land, cliffs, and the lighthouse itself.

On the brighter mornings at our holiday cottage base in Satran, the sun arched in over the Cuillin mountains to glorious effect, its rays piercing through cloud and over the ridges.

On the slightly less bright, but still enchanting mornings, thick mist lay sullen and unmoving in the valley dips beyond Satran, blanketing whole regions. Perhaps the lady at Dunvegan Castle would have just called these ‘cloths’ or maybe flannels. 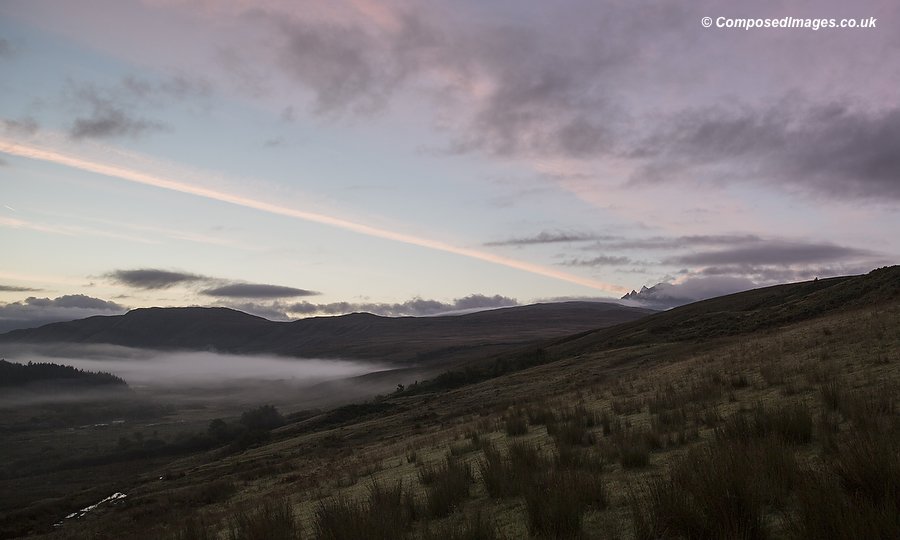 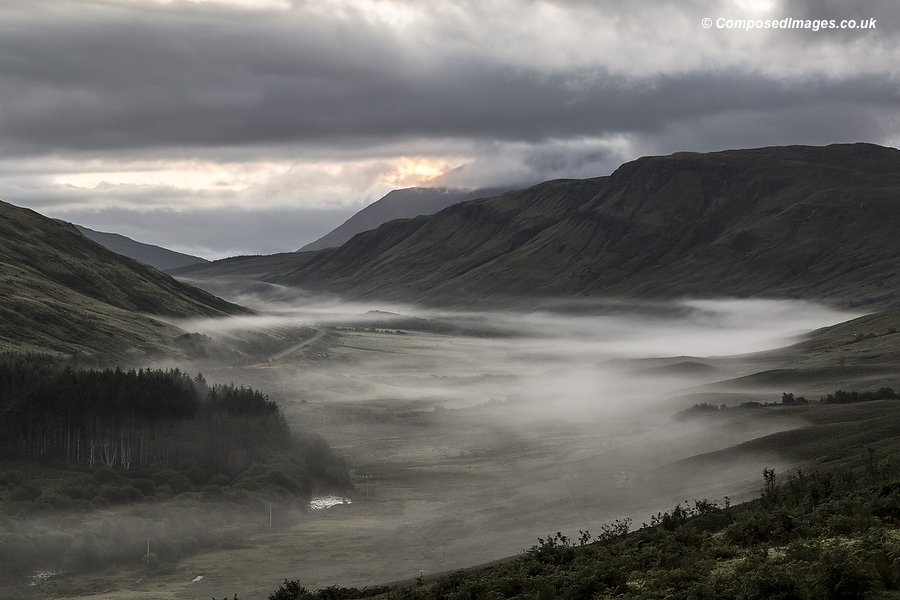 Only when the sun rose to a certain point would they burn off, but I am sure on other days in different seasons, they never really do.

[Read the Isle of Skye travel post: North of Skye]

We stopped at Sligachan in between places, snared by the obvious beauty of the imposing mountains, the landscapes and the bridges and sanitised pathways. The weather happened to be warm and summery at that time too, so we took a stroll down one of the paths. 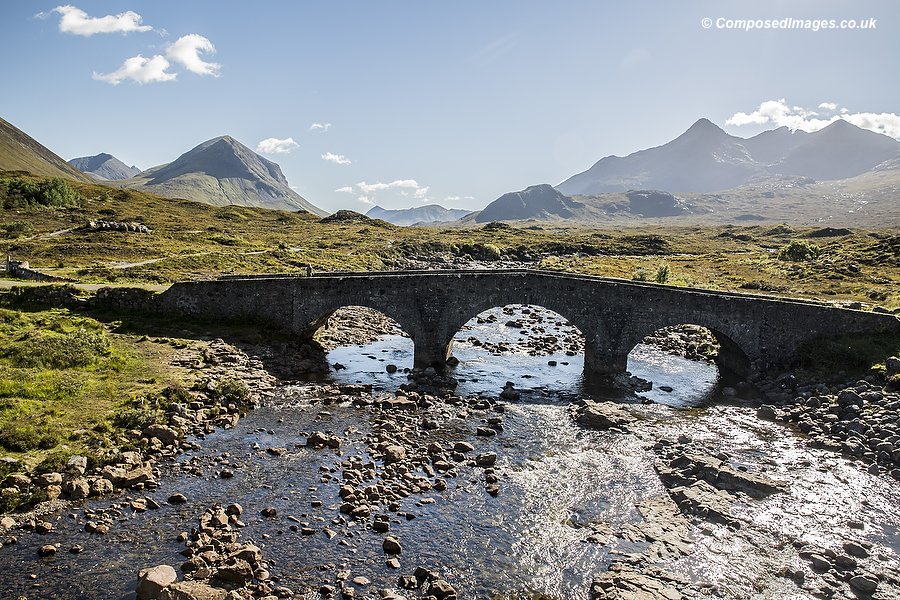 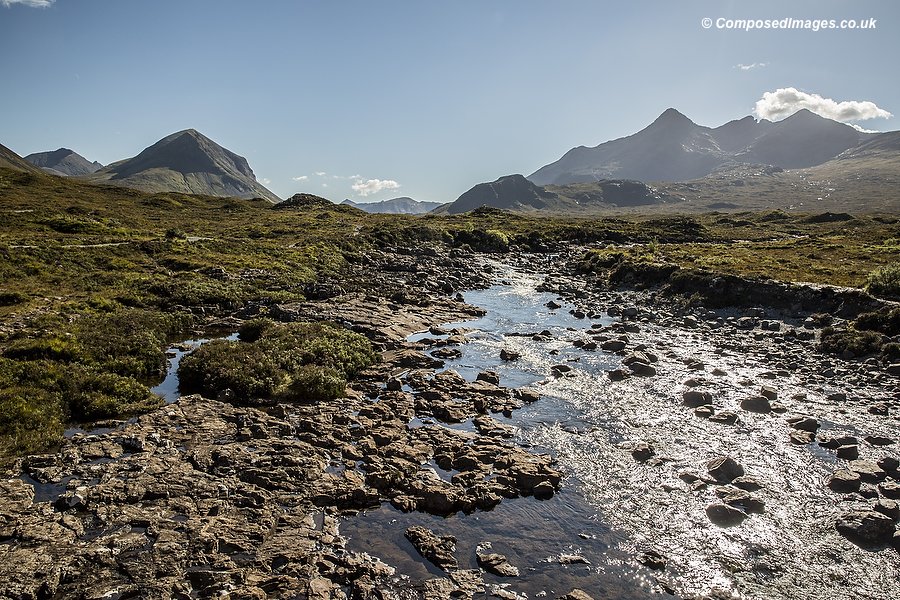 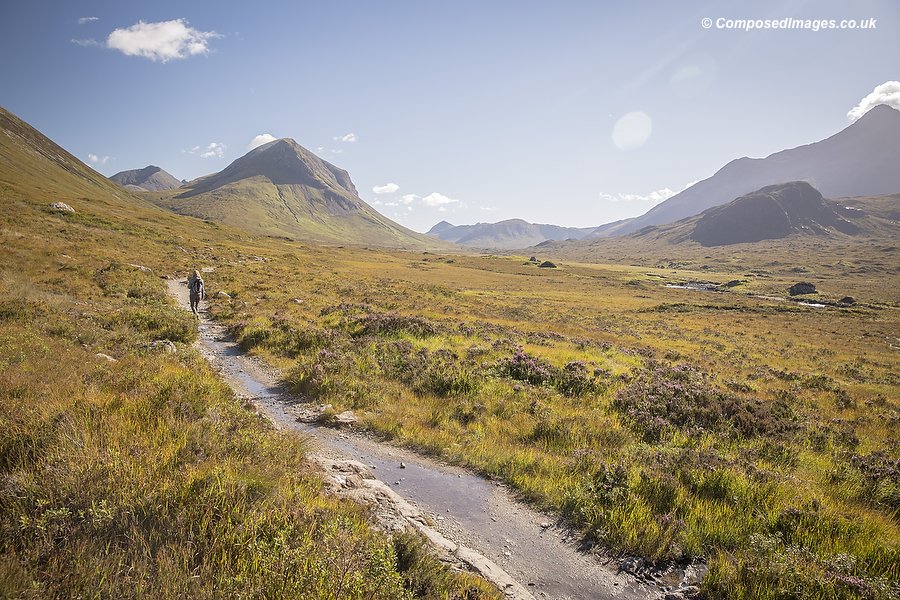 During our gentle amble I captured what was probably my favourite iPhone snap of the trip. I half thought I’d missed the opportunity as I took my iPhone to ground level and tried to focus without impeding the slink of the colourful caterpillar, but the final shot of three proved to be the keeper.

Talisker Bay wasn’t far away from our cottage, but we didn’t make it there until our final evening on the Isle of Skye. An enclosed bay requiring you to walk a mile or so alongside a field seemingly owned by cows, it looks west, out over the Sea of Hebrides, towards other outlying islands reachable by ferry from ports such as Uig to the north. 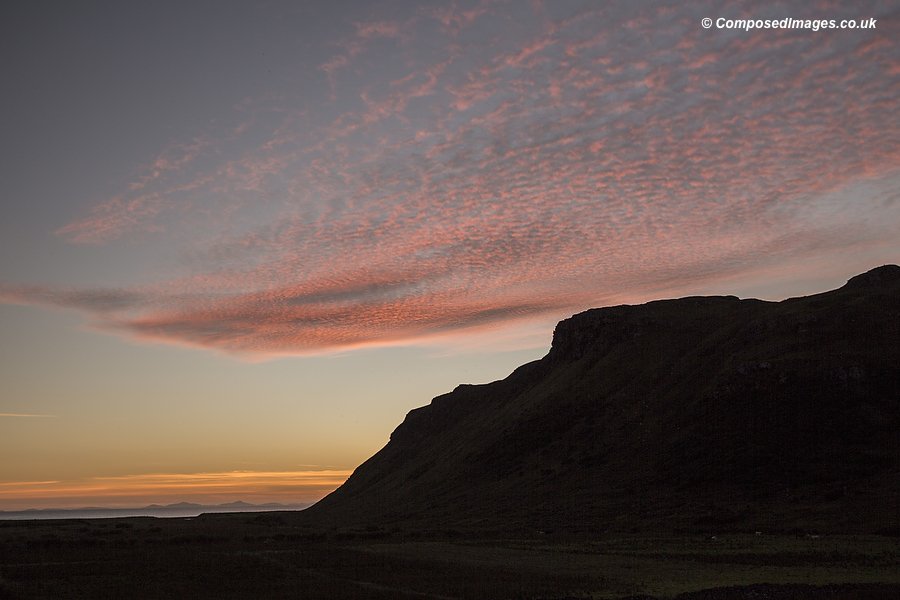 A gorgeous ocean plopping sunset proved a fitting end to a trip abundant in unique and distinctive pleasures. The Isle of Skye was even more startling beautiful and endlessly photogenic than I’d hoped.

Click the Travel tag at the top of this post to see more travel blog posts from the archives, including writing and photography from Ireland, Spain, Thailand, Vietnam, America and South Africa.

Please get in touch if you’d like to commission Composed for travel photography or travel writing.