Another from the travel vaults, this tells of a day during a 2008 road-trip around the mesmerising Western Highlands of Scotland. The well-travelled writer, broadcaster and Monty Python member Michael Palin ranks this as his favourite area of the UK and it’s easy to see why. I badly want to go back.

I wind myself up into balls of stress, driving faster and a little aggressively. Darkness has fallen completely, draping the snowy white mountains with black. My hire car can’t fend off the icy blasts which penetrate into the vehicle from outside.

Clicking off the stereo, I find the switch activating the full beam headlights. On I twist and turn the vehicle, bending and looping, spindling up through a mountain range, oily blackness everywhere that’s untouched by my headlights.

Swearing lightly under my breath, panic beginning to rule my heartbeat, I notice a faint numbness in my hands, knuckles chilled into a rigid grip around the steering wheel. I still don’t know where I’m going, but this is to be expected if you set off on a loosely planned roadtrip without booking accommodation.

AA signs on hotels are intended to signify quality, but to me only signify expense. A minute after passing it I growl out loud like a demented old man, sick of myself, cold and tired. I find a straight area of road where I can safely execute a three-point turn, and head back to probably the only hotel that exists for miles around.

Those frustrations momentarily blotted out the great day enjoyed until around 4 or 5pm, when the stress began. 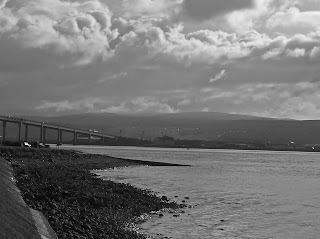 Actually, it had been better than great. It had amazed. Early this morning a passable cooked breakfast at a B&B in Elgin fuelled me for the careful drive ahead, through a light sprinkling of frozen snow and on towards Inverness. A few righted wrong turns eventually ushered me over a sequence of bridges in a loop around the city. Ahead lay the Western Highlands with its beefy, mansized landscapes. I stopped briefly in North Kessoch, a bridge and large loch to one side of a panaroma which swept around to present the first handsome mountain range. It was tranquil and pretty, but would pale in comparison to what lay ahead.

Sunshine and pleasant warmth barely relented all day, even near the higher snowy regions of the mountains. I ventured from the car for an improvised two hour hike, in part listening to fittingly cosmic soundscapes by Sigur Ros on my iPod. It left me feeling like the sole proprietor of planet earth, until I happened across two sets of boot-prints in the snow.

At a peak I unpopped my earphones and listened to the stillness and scale, tingling from the environment, the blue skies and whispy clouds, the solid white peaks, dominant mountain ranges near and far, how the imposing rock carved into the land like layers of Viennetta ice cream.

Heading west, the next natural wonders were the shimmering giant lochs lying between Glens in the direction of Skye. After dropping a gear to climb a steep incline, a new vision presented itself which I wanted to lock and store in my brain forever. Here was a loch of huge proportions, dug deep into what seemed like perfectly accommodating land. 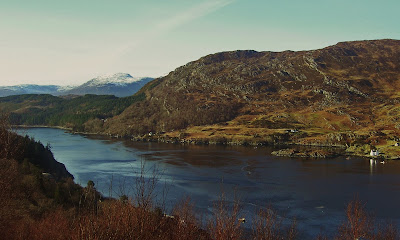 I wanted to stop and walk but didn’t dare as the curling road was narrow and the sheer cliffs to my left were emblazoned with landslide warnings. Presumably this stretch becomes impassable when the snow arrives. I drove on, twirling up and down as I skirted the Loch’s edge, stopping just once at a viewpoint offering distant views of working farmhouses, dotted sparsely along the opposite side of the loch. Plumes of chimney smoke fought to climb from the valley as the water below cradled sputtering fishing boats which scratched trails across the surface. There was rich magic woven into the whole scene, almost as if it was aware of its old world allure and romantic mystery.

Further west the road narrowed in anticipation of the ocean before an anomalous new bridge structure appeared, connecting it to the luminous Isle Of Skye. As much as I wanted to explore Skye, time was ticking on and I needed to begin thinking about where to sleep, and if I could find somewhere showing the football.

Back on the mainland, invited by an irresistible sunset blotting itself over the water I stopped at a beach. There I sat and gazed and absently pondered life.

All images taken with a basic Nikon Coolpix camera. (Click to enlarge). More travel writing and photography can be found on this site from trips to Ireland, Nice, Vietnam, Cambodia, Thailand and South Africa.