It was an indifferent kind of game for me up until that point. I knew anything worthy of sending to picture desks would have to at least be on a par with the many other photographers around me from big agencies. And until then nothing really was.

Gareth Bale had run the whole show, dragging hapless Icelandic defenders this way and that as he tore down the right touchline. His free kick for James Collins’ opening goal was whipped with such pace I found it impossible to follow onto the pate of the West Ham defender. It may have even gone in directly without a touch.

With 20 minutes remaining Bale collected the ball and once more began to run at the defenders. This was all perfectly in my line of sight. He kept coming, running almost directly into my lens, bamboozling one, two, then three Iceland defenders.

It was a thrill, seeing Bale, one of the world’s best on such form, albeit in a half empty stadium. Playing alongside other Real Madrid stars appeared to have finally given him full belief that he was worth it, he was that good, he had supreme confidence and grace.  Not that he lacked it before, but I’d seldom seen him carry a whole game so obviously.

For a Tottenham fan like me, it was a bittersweet thrill: seeing what we had depended on so heavily last season, what we badly missed this season. Memories etched of that last minute goal in a finely balanced away match at West Ham last season. Teetering at 2-2, he dug out an astonishing top-corner strike from distance, and I roared from my sofa, the wide smile across my face not fading for a good half an hour.

The season before in an equally finely balanced match at Manchester City, when he restored hope and squared the game with a beautiful curling effort beyond Joe Hart. At that point, the score at 2-2, Tottenham closing in at the top of the table under Harry Redknapp, playing exceptional football; before Bale’s ball across the penalty area to Defoe, a stud’s length away; before Balotelli stamped on Scott Parker’s head but was spared a red card; before Balotelli nonchalantly stroked away a last minute penalty condemning us to defeat; before all that, it looked possible. Maybe, just maybe, we would challenge for the title.

Now Bale had largely given up on games of such slender margins to go and win the majority for Real Madrid.

For all that, his unwavering commitment to Wales kept bringing him back to Cardiff, the big question for Wales fans being: how well he could function on the pitch with Aaron Ramsey? The time spent on the pitch together for their country has been brief until now. If they can work together as well as their individual form suggests, supported by established regulars and emerging talents like Manchester City’s Emyr Huws and Liverpool starlet Harry Wilson, qualification for a first major tournament since 1958 could be within their grasp.

For now, Gareth Bale was majestically filling my viewfinder. The quick dip inside the defender onto his left foot looked inevitable, but equally impossible to stop. 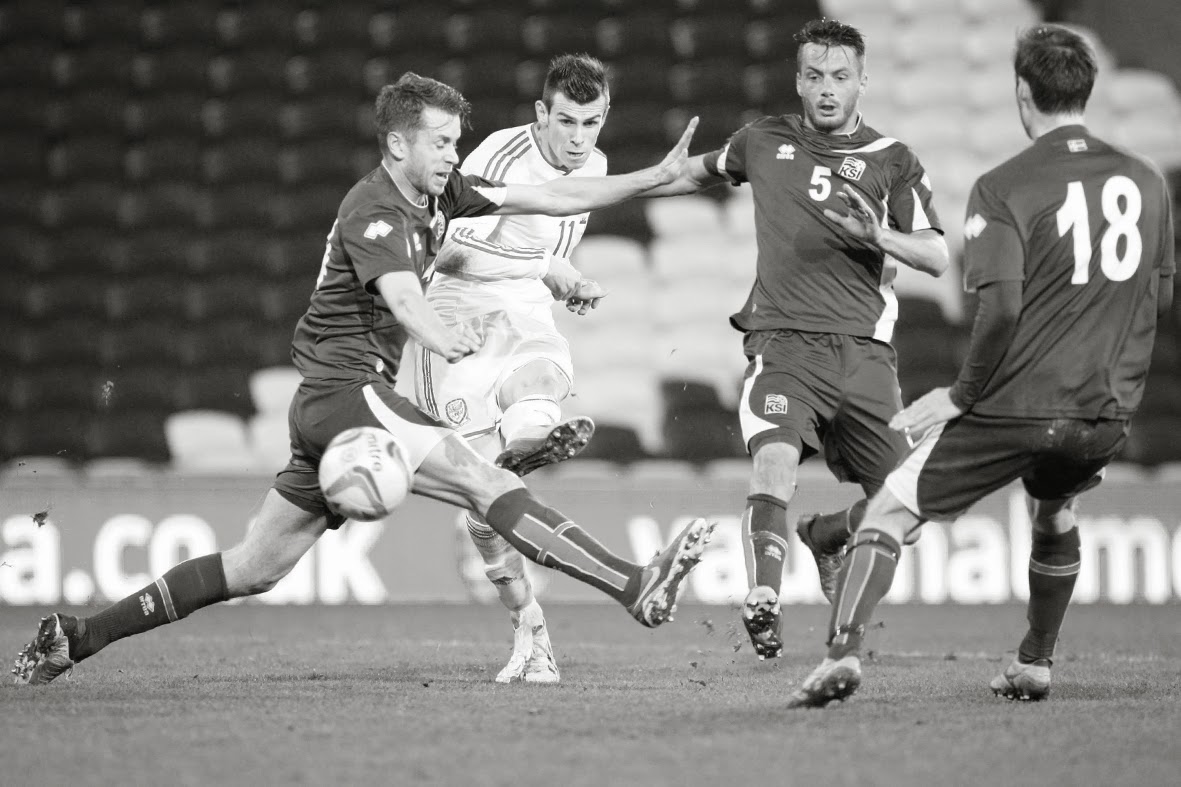 And he ran over to celebrate, mutedly, almost embarrassed, a kiss blown to family in the one half of the Cardiff City Stadium with people in it.

I knew I had sendable images, although I also knew that so did all the other photographers sitting around me, the bolshy blokes with bazooka-like lenses who asked me to sit back a few inches so they could get a view. Hell, it was worth a shot anyway. And luckily, my painfully unreliable laptop decided to work when I needed it most, enabling me to get the shots away.

The next day, flipping through the newspapers, I saw many identical images to those I’d captured, my name alongside none. It wasn’t unexpected. Still, the buzz of capturing Bale in full-flight was enough.