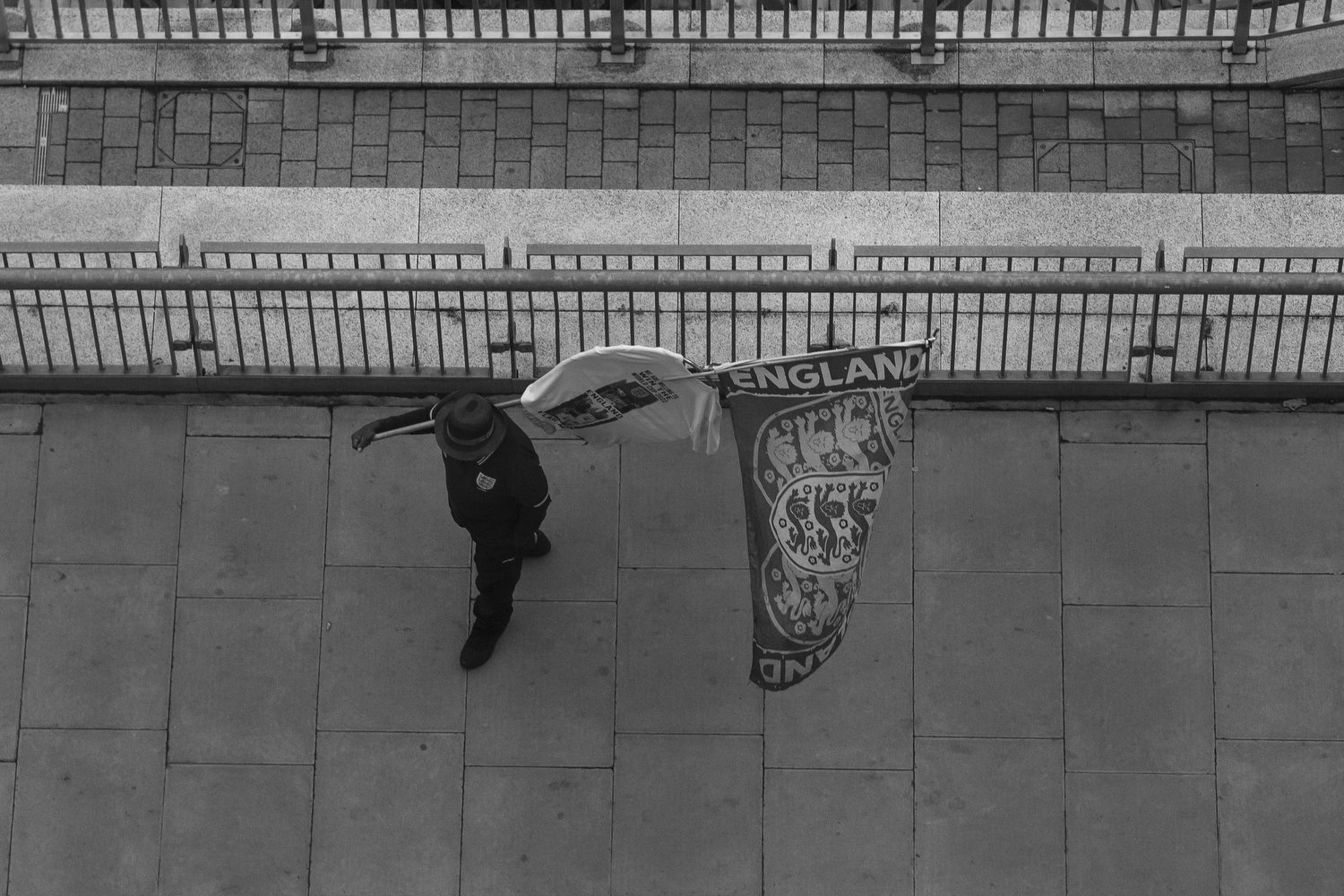 The England v Wales friendly international was a game I applied to photograph without much hope. Places are strictly limited in the covid world, and my application had been unsuccessful for the last Wales home game. It all feels like a lottery, and sometimes it literally is.

It wasn’t the most mouthwatering or significant match between the two home nations.

Last time they met was during the Euro 16 tournament in France, which England won, despite having a much worse overall tournament than semi-finalists Wales.

This game though was a friendly. Wales were without key men Gareth Bale and Aaron Ramsey. England were without a handful of covid-19 rule-breaking partygoers. It was the first of a three match international break for both, with their next games being in the UEFA Nations League. Obviously there would be no bloodthirsty partisan crowd, although it had originally been earmarked as a possible test event for fans. With cases rising once again, that plan was cancelled.

Here was a game for experimenting with players, giving all important international match experience. And both sides appeared to use it that way.

Nearing London on the M4, a few junctions from its source is Heathrow Airport, the largest airport in the UK by some measure. In the ‘old normal’ times you would always see aeroplanes taking off and landing, circling and queuing, appearing frighteningly close to the motorway. It was sort of dreamy. Never a frequent flyer, this always held a child-like excitement for me. It also signified that you were close to the capital with its busier and scarier traffic.

Last Thursday I didn’t see a single aeroplane. As much as I peered skyward while pootling along at the regulated 50 miles per hour (as you must from junctions one to around twelve because of the long term motorway digitisation project), not a dicky bird – of the large steel variety.

Whether the absence was irregular, I don’t know. But it felt strange and sad and sort of doom-laden. Travel has seriously suffered due to coronavirus. Airlines are close to going out of business. There are huge job losses, big companies are posting awful financial figures, making losses for the first time ever.

But it’s a positive thing for the environment.

After leaving the M4 I snaked up towards the north circular, where the painfully gridlocked rush hour traffic eventually squirmed me around to Wembley. 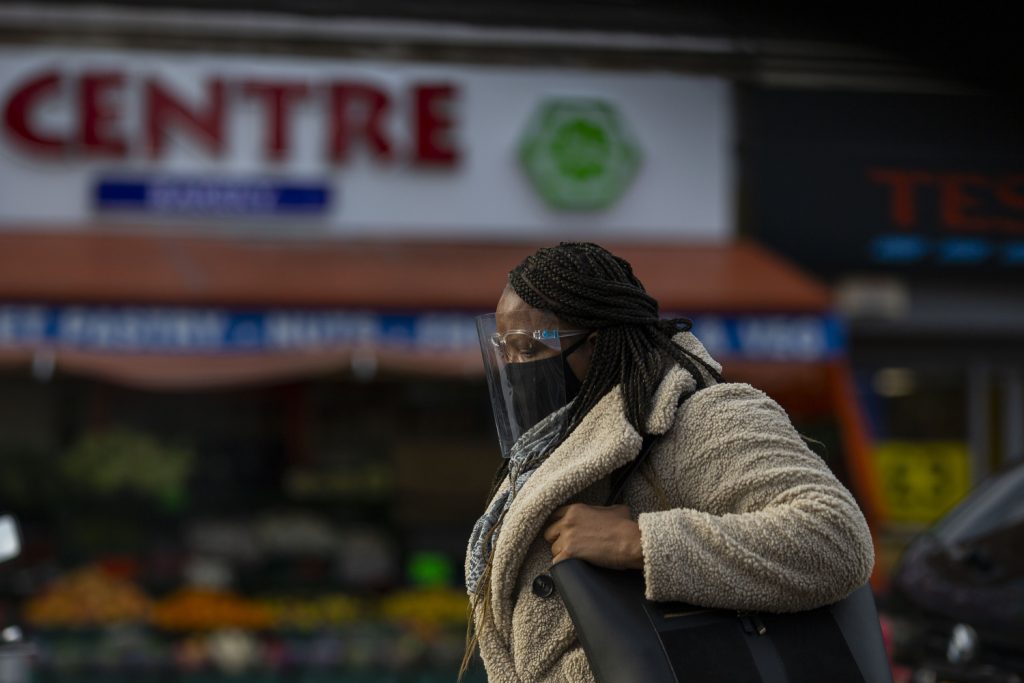 A woman wearing spectacles, a face shield and face mask walks along the street in Northolt, October 8th 2020.

When driving from Cardiff to London without stopping anywhere along the way, my arrival is blurred by the urgent need to pee. It is so bad I can barely think. This time my salvation was a urinal at a nearby shopping centre.

Before returning to the car to collect the rest of my kit, I scaled the stairwell to the car park roof, hoping for interesting views. I had a photo project about Cardiff car parks some years ago, and often enjoy the views offered by usually empty car park roofs. Those found here allowed me a moment to pine for the bright lights of this incredible city, which I hope to see again one day. But in these times, who knows when? This was only ever going to be a flying visit. 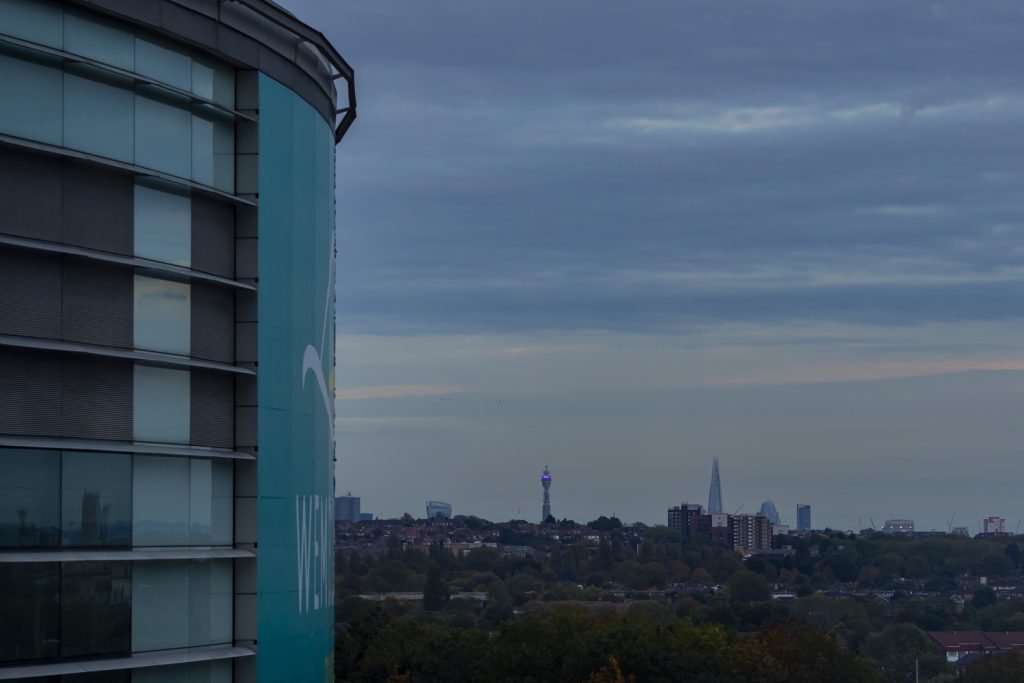 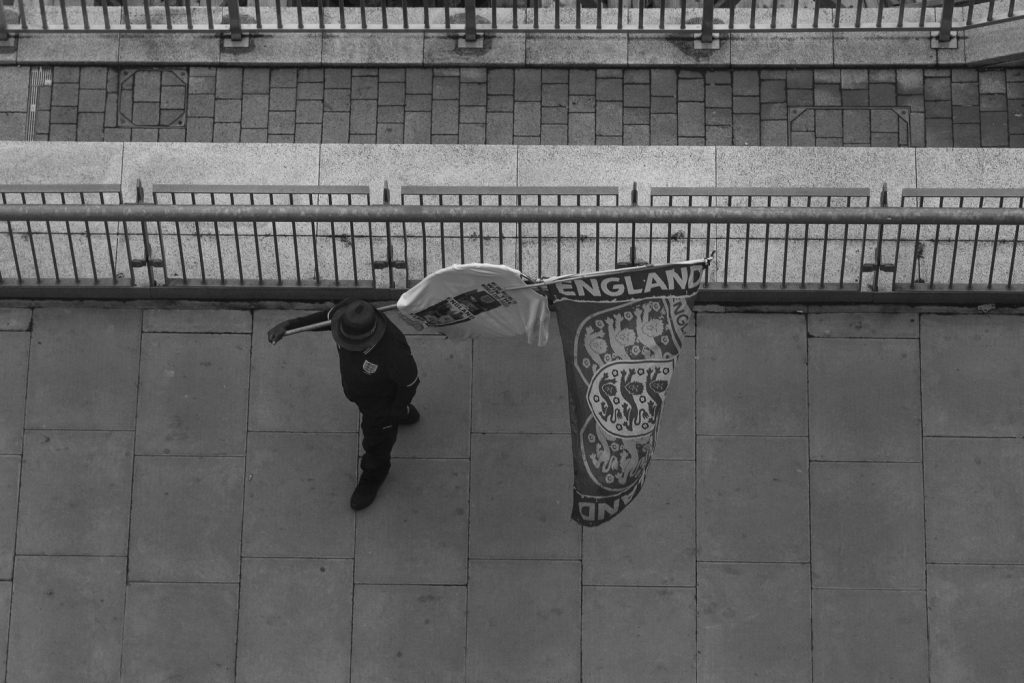 A lone, flag-bearing England fan outside Wembley ahead of the friendly international against Wales, October 8th 2020.

Media people had to pass through a medical test accreditation and fill in a form before collecting their accreditation. I had mine with a Scottish lady who appreciated my tartan face-covering, made by mum from an old duvet cover. Inside the ground it wasn’t as heavily regulated as the pre-match communications had suggested. We were largely free to roam. I chatted briefly to the new Wales team photographer but nobody else.

Early in the match I instinctively touched the ball as it rolled slowly but directly towards me, pushing it back towards the corner quadrant with an open palm. Usually this would have been fine. Not so in the covid world of utmost hygiene. Jonny Williams took the ball and continued to play with it. I feared some sort of strict reprimand for the next few minutes but it never arrived. 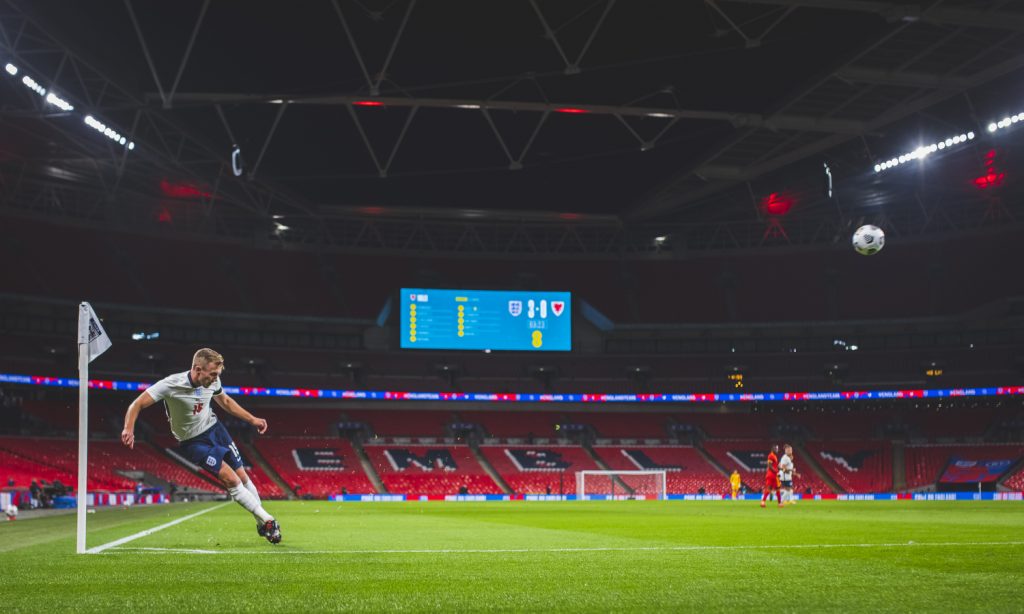 The match itself finished 3-0 to England and wasn’t much of a contest. It was lit up for me by the performance of England’s Jack Grealish. I hadn’t witnessed such a dominant performance by a single player for some time, although I don’t watch that much football these days. He had an insatiable demand for the ball and was a magnificent pest of Sonic The Hedgehog-like energy when he didn’t, pressing and blocking. He attracted foul after foul early in the second half as Wales struggled to get some kind of foothold in the match. He reminded me of peak David Beckham or Gareth Bale, how he’d lean into challenges and invite the contact, goad the opponent, win the foul. Several Welsh players collected yellow cards for fouling him. He was so good that there appeared to be no other way to stop him. 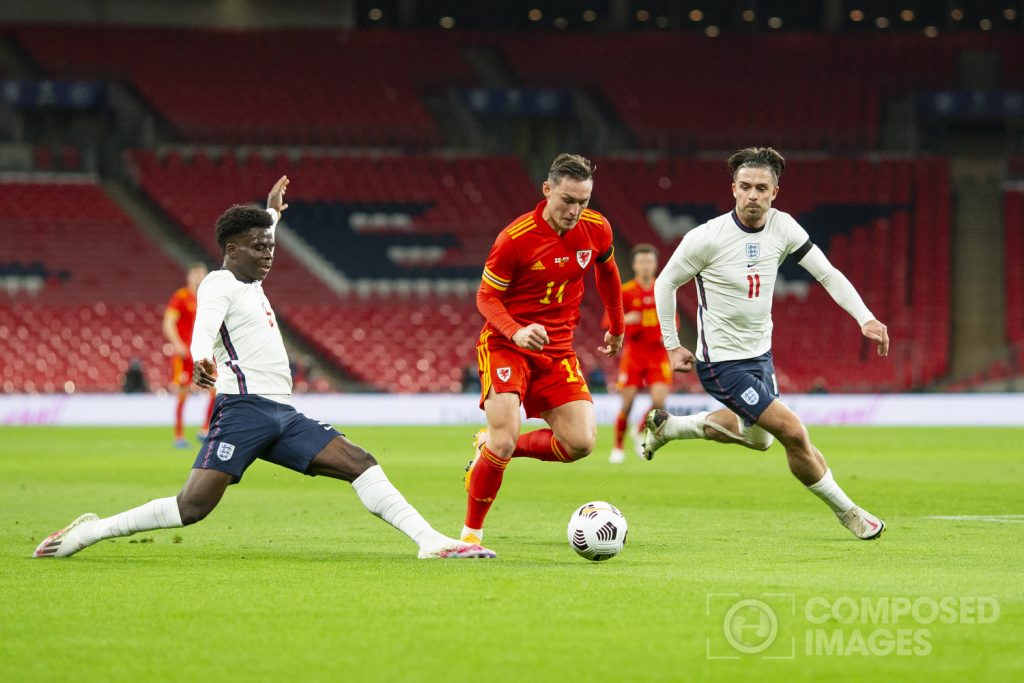 London, England, UK. 8 October, 2020. Connor Roberts of Wales gets between Bukayo Saka and Jack Grealish of England during the friendly international match between England and Wales at Wembley Stadium. 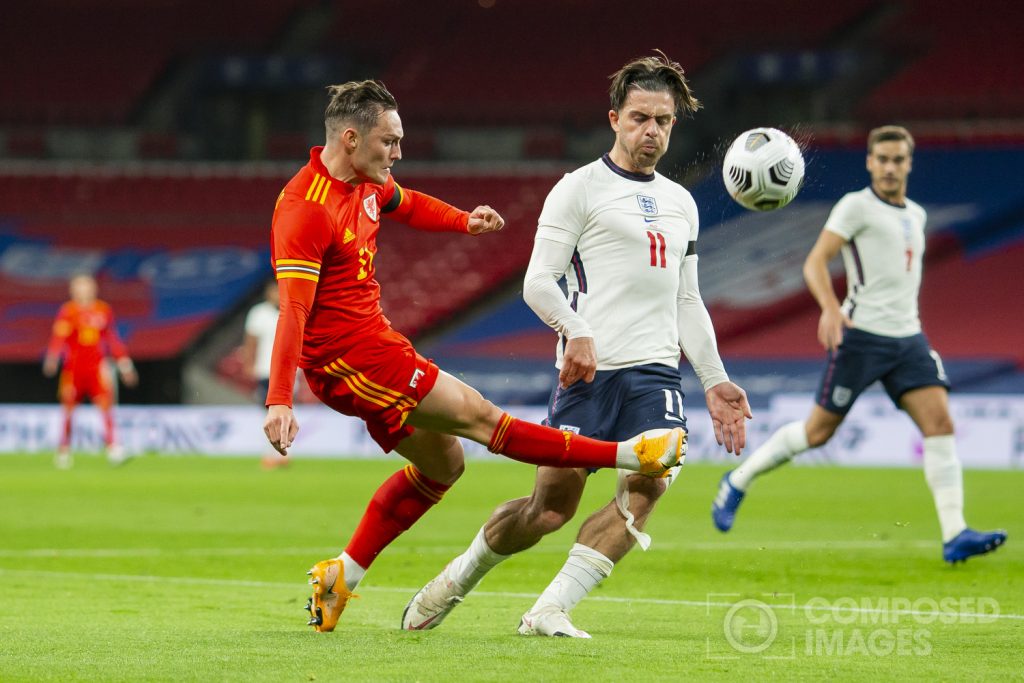 London, England, UK. 8 October, 2020. Connor Roberts of Wales sees his cross blocked by Jack Grealish of England during the friendly international match between England and Wales at Wembley Stadium. 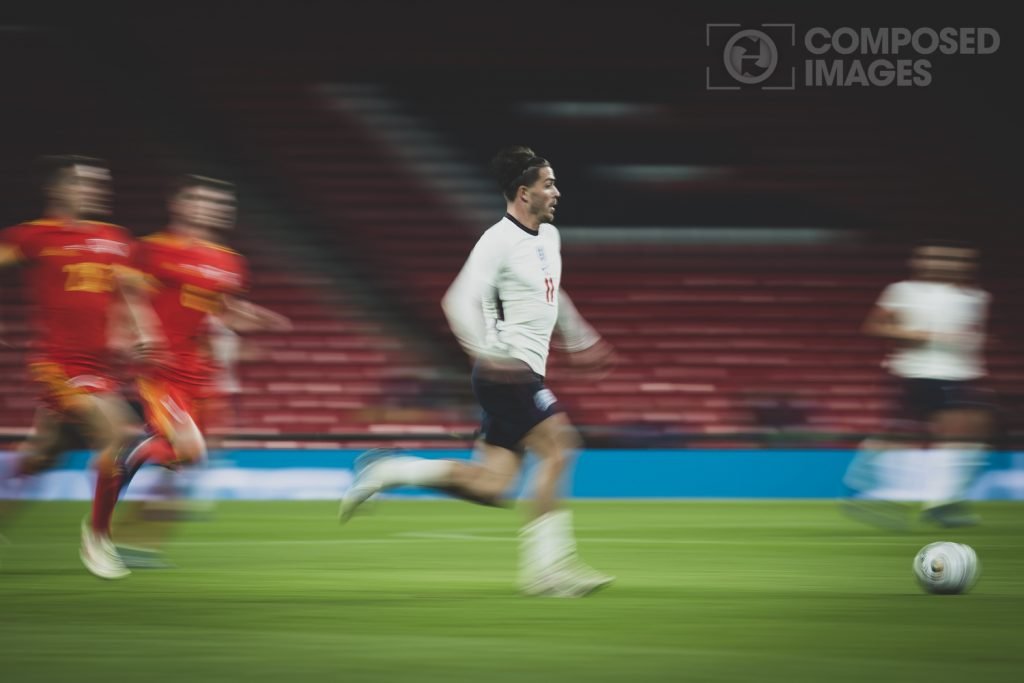 I didn’t move position at half time and a couple of other photographers came and sat near me. One was shooting with a beautifully purring Sony set-up. The other was The Guardian newspaper’s Tom Jenkins, a widely respected and celebrated photographer. The set of pictures he posted to Instagram a day or two later was painfully superior to my own offering.

I didn’t have a great game, no decent goal or celebration pictures. Perhaps I could have been more adventurous and tried some stuff from the empty stands, but it was sort of to be expected, being so lacking in ‘match fitness’. You shouldn’t compare. You don’t do this that often at the moment. You don’t have his decades of experience, or his high grade of equipment.

You tell yourself all this but still of course you do compare and feel hugely inadequate. 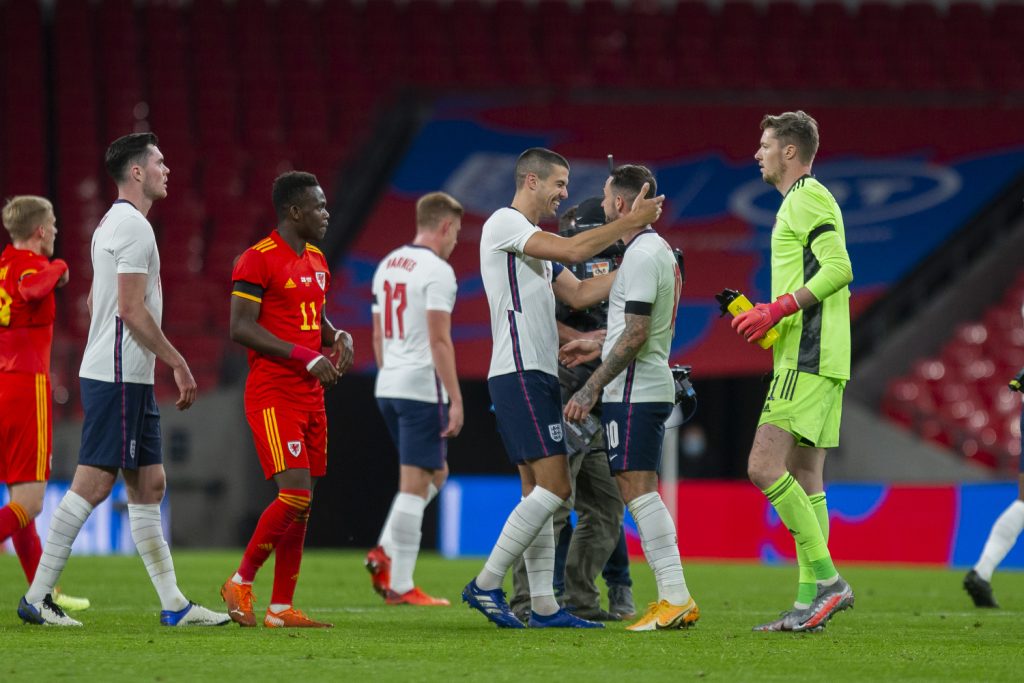