The Disappearance of Emiliano Sala 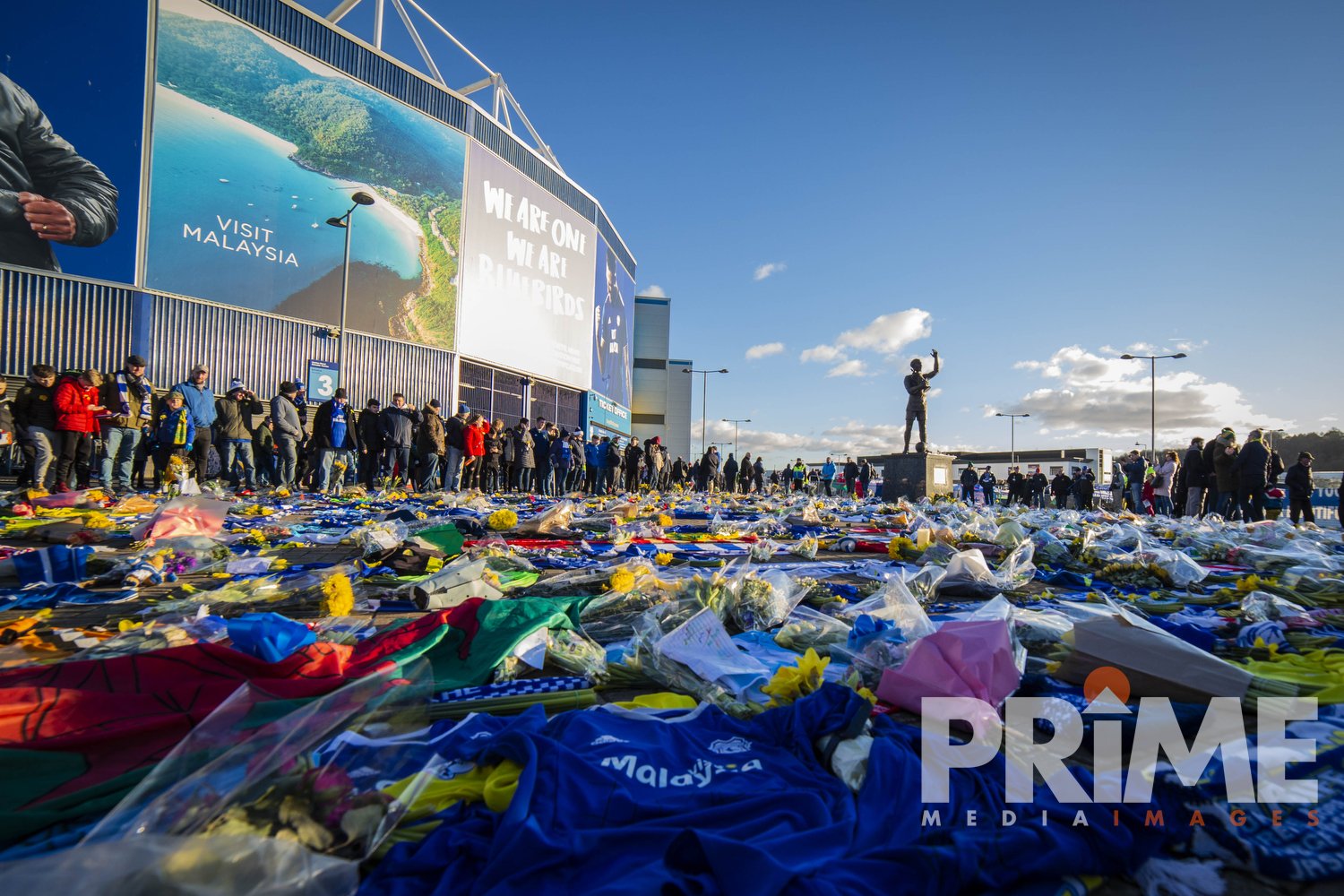 On Saturday evening, Cardiff City played their first home match since the disappearance of new club record signing Emiliano Sala and his light aircraft pilot David Ibbotson. There was an outpouring of emotion from the stands, players and staff, including Cardiff manager Neil Warnock.

Since visiting Cardiff City Stadium the evening after the plane disappeared, the main tribute to Sala around a statue at the front of the ground had swollen with flowers, scarves, shirts and messages.

Inside the ground, a stirring atmosphere was generated. The stands reverberated with the hypnotic ‘song for Sala’ as Cardiff put in an impressive performance, beating Bournemouth 2-0 to keep in touch with their relegation rivals. The song remains firmly lodged in my head.

“Sing a song for Sala
We will never let you go
You’ll always be
At the City here with me.”

There’s a fuzzy logic in the embrace of Emiliano Sala by the Cardiff fans. He never played a minute but he signed a piece of paper and became a Cardiff City player. Tragedy means he will go down in Bluebirds folklore and be remembered in the history of the club, probably more than players who dedicated several years of their career.

Emiliano Sala’s face has been everywhere since he disappeared: tanned, boyish features and a look of intense concentration. The new signing photographs taken at Cardiff City, a few Nantes match action shots and one nice portrait image are being particularly well used in the media, as well as what appears to be a slightly grainy selfie of him relaxing at home.

Late on Saturday night after shooting the match, I grew over-tired. I spent too long lying on the sofa drifting in and out of consciousness to the drone of Match of The Day, failing to summon the will to get the dog off my lap and go to bed.

When I eventually fell into my pit, sleep refused to arrive quickly. It was Sala’s face and his final moments my brain was still circling around, still trying to fathom. How did that even happen? His death is something unimaginably horrific and yet you can’t help but try to imagine it. At least this morbid brain can’t.

Emiliano, or Emi, as he is known to team-mates, sits in a light aircraft bound for Cardiff in the unsettled early evening one Monday in late January. The 28 year-old man from the central Argentina province of Santa Fe is at the peak of his footballing powers, ready for a career-defining tilt at the Premier League with struggling Cardiff City. His Instagram posts suggest his excitement about the move from Nantes and his hunger for success. He is due to report for his first Cardiff training session the next morning.

He expresses doubts about the plane in a Whatsapp voice message to friends and family as he awaits take-off on the runway in Nantes, north France. He says it ‘seems to be falling apart’ and talks, half-jokingly, about a search for him if he is not heard from in the next hour and a half. In the message his voice sounds tired and indicates the whirlwind last few days, going back and forth from Nantes to Cardiff.

After signing for Cardiff he had wanted to return to Nantes to properly say goodbye to his team-mates, his friends at the club where his professional reputation was established, earning his lucrative three and a half year Cardiff contract.

I regularly observe and photograph professional footballers from a well policed, media-accredited distance and would have probably photographed Sala on countless occasions if things had turned out differently. If they had turned out normally. It’s a global game and the life experiences of footballers can be extremely different; their appearance and manner varies widely. But such footballers are essentially all young, wealthy, successful men. They all enjoy a degree of celebrity and attention, existing in an always precariously transient, stage-managed bubble. They are a valuable commodity.

But it seems there are dangerous gaps in this stage-management, where players are transferred between clubs and everything is less secure, where football agents exist, where you can get a shaky looking light aircraft to take you from Nantes to Cardiff at night in unsettled late January weather, for free.

They noisily take off and creakily climb into the sky. Dave the pilot is a Lincolnshire man, qualified as a pilot to take skydivers for jumps, but an engineer by trade. He sits at the controls, wrestling the plane in difficult weather. It is now dark outside, and windy too. Maybe the plane feels fragile in the air, juddering along. Maybe internal lights go out. Maybe Emiliano can make out the pilot up front, hear an alerting beep beep beep, or frantic repetitive clicking and crunching noises as he desperately tries something which fails to work. Maybe he hears Dave make the request to land early in the Channel Islands and knows there is a serious issue and the pair of heartbeats quicken. Maybe there is a small blank cockpit door and he sees nothing. Either way he is totally alone, trapped and terrified and helpless.

Emiliano’s whole career, profession and life has been built on his body, its physicality, the technique with which he can manipulate it to score goals. In this moment, pinned into his seat, that physicality shrinks to nothing of any consequence. He has no power to influence this situation.

Coming from Argentina and playing in France, Emiliano flies a lot. This is just a short hop from the north of France over the channel to Cardiff. Sure, the plane looks like it’s falling apart but really, what could go wrong on such a short journey? Maybe this is what he thought. He was tired, perhaps lacked the language skills needed to converse with Dave. He just wanted to get to his destination as soon as possible.

Perhaps the single engine fails and their altitude drops and the temperature drops and the air changes and everything accelerates and it is impossible to tell which way is up.

Such thoughts have been swirling around my head for a while, and will probably continue to for a while yet. Personally I don’t think ‘everything happens for a reason’ and I don’t believe the search for meaning is always constructive, although there were clearly grave errors of judgement made in this case.

What primarily occupies my headspace is the human experience of such a fate, what horror these two men went through in their final conscious moments, what went through their heads. Like a dozy moth, my mind  keeps circling back to it again and again. As I imagine it must do one-hundred-fold for those more closely involved: team-mates and managers past and would-have-been future, friends and family who knew the men, including Cardiff manager Neil Warnock who was in close touch with Emiliano for weeks leading up to the transfer. His emotion at the final whistle on Saturday was plain to see.

You think about the alternative realities: the one where Sala is an immediate success on the pitch and saves Cardiff from relegation, or the less remarkable one where he struggles in the Premier League, Cardiff are relegated and he spends a frustrating season in the Championship before finally gaining a transfer away from Britain.

If that had been his fate he would be less well remembered. The reality feels like an unfathomably surreal fable.

Sunday February 3rd saw the first privately crowdfunded underwater search in an identified area a short distance from the French coast. Led by an industry specialist well skilled in such ocean investigations, the aircraft was promptly found.

A body was soon extracted and taken to a coroner in Dorset on the south coast of England, where it was identified late on February 7th to be that of Emiliano Sala.