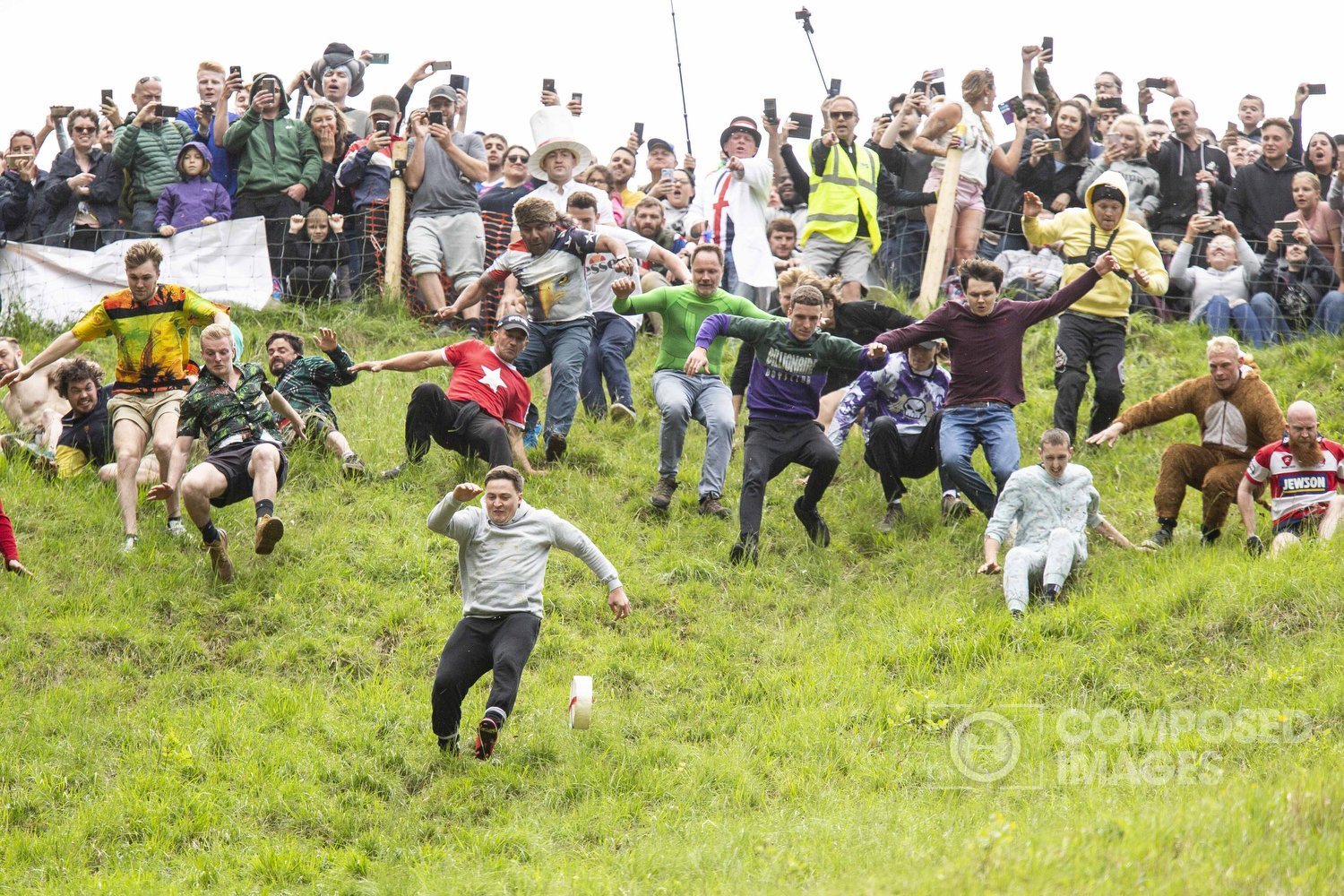 The crowd starts chanting, a low rumble of voices at first. Slowly it builds until everyone is on the same page. “Cheese! Cheese! Cheese!”

They are calling for the release of the first roll of cheese from the top of Cooper’s Hill. Or perhaps simply expressing their love of cheese. It doesn’t really matter.

Nerves are now jangling for the thousands of spectators lining the perimeter of the hill as well as those at the top, but probably not equally. Men at the top tentatively plan their descent, pray for their limbs to remain intact. “Are they really going to do this?” an American voice at the barrier behind me asks. 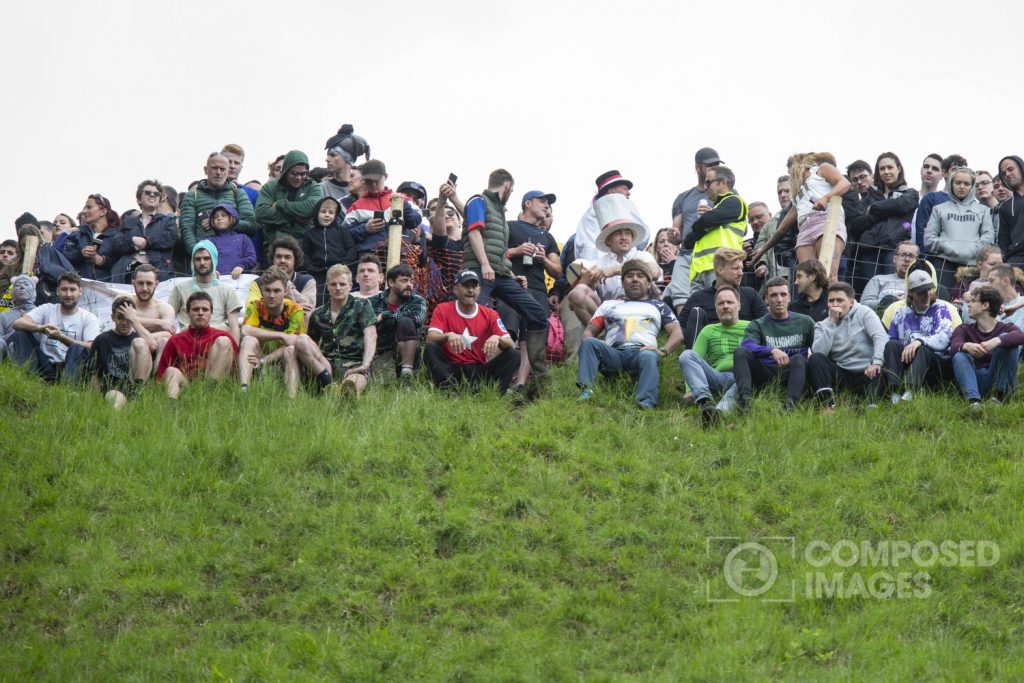 They’d better, since we’re all here. 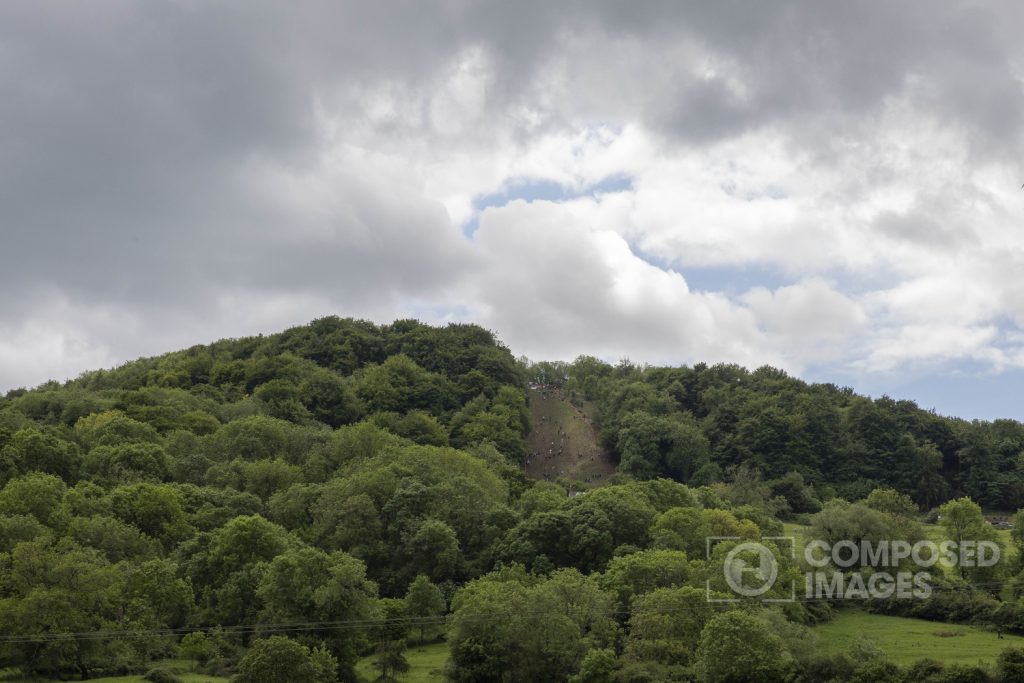 Cooper’s Hill Cheese-Rolling and Wake is an annual event held on Spring Bank Bank Holiday in May near Gloucester in England. Traditionally held for the villagers of Brockworth, today it attracts people from all over the world. (The Wake part of the formal title remains a mystery to me, but probably refers to getting drunk afterwards).

To reach Cooper’s Hill you climb a sub-hill from the village of Brockworth, around a two mile hike. There is no parking nearby on event day and police cut off the roads to non locals. From a dedicated pub car park you can either walk up via a scenic route of expansive fields with panoramic views across the region, or via tree-lined roads – one wide A-road followed by a small sequence of steep, narrow winding lanes. One of these I note passes an acupuncturist, but there are no osteopaths or chiropractors.

Overtaking a group of people on the walk up, I overhear one young woman. She speaks in a matter-of-fact west country accent. “I was paralysed from the waist down last year. They wouldn’t let me out the hospital for ages.”

There is genuine anticipation on the walk up. I last attended around thirty years ago, so my memories are sketchy. We went with Dad’s new work colleagues after moving to the area some time in the late 1980s.

You round a final bend and are suddenly confronted by it, an almost vertical wall of green. There is an undeniable wow-factor. It’s similar to the sensation you might experience after first climbing a flight of concrete steps in a football stadium and looking down on a pristine lush green pitch. Woah, there it is. But of course this theatrical green canvas of grass is nowhere near flat and pristine. It is in fact the opposite of flat and pristine.

Annual cheese rolling at Cooper’s Hill is a big spectacle locally, nationally and globally. This is despite it not being an official event – whatever that means. It’s reported that concerns about the event being too dangerous has led to it being held unofficially, rather than being backed by authorities. Such insanity could never be legally permitted in an age of health and safety regulations. On the site a few lofty media platforms have been erected; there are professional photographers and videographers, a Netflix documentary is being made, a Sky Sports News presenter I recognise from press conferences is here with a cameraman, other television networks from overseas are here. A few drones buzz about overhead. Naturally in 2019, countless spectators point smartphones and cameras.

“We need you to move along behind there!” a security man shouts at spectators behind the barrier who had bottlenecked the space a short distance behind me. “Move on up the hill!”
“But we can’t all get up the hill,” a woman’s voice responds. “It’s too dangerous!”
“The whole thing’s dangerous innit love,” the security man quickly responds. Everyone laughs. No further questions.

Minutes from the first cheese launch, a cheery Mexican wave begins. It completes several circuits of the hill’s perimeter, intact arms flailing skywards, beer cans aloft. The Master of Ceremonies speaks from the top of the hill using a loudspeaker, his words tinny and unclear from the bottom. 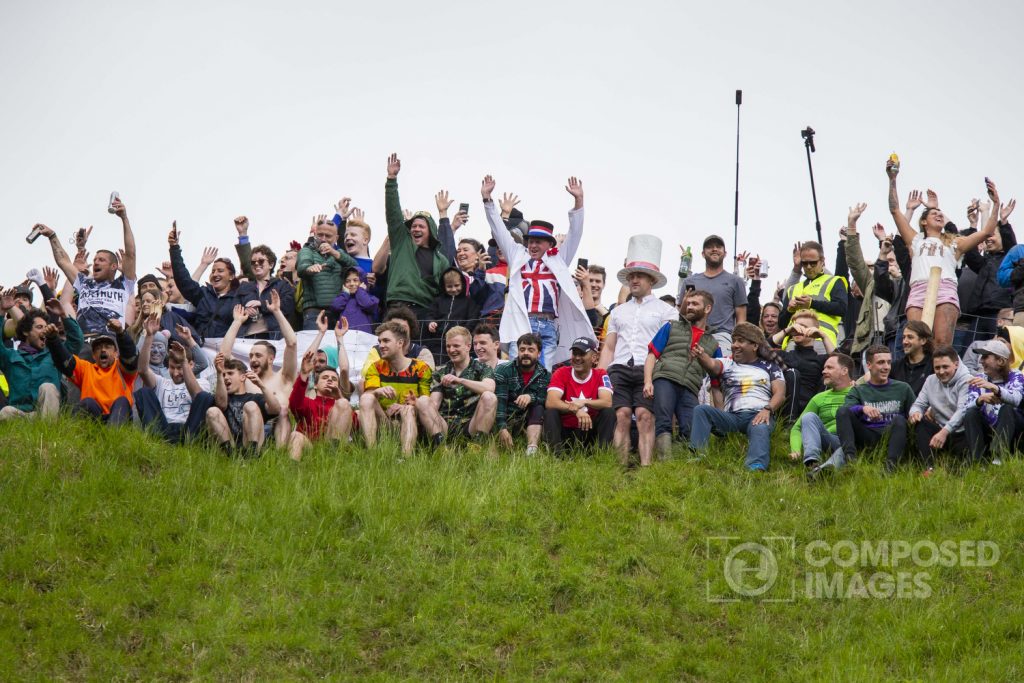 The Mexican wave reaches the top of the hill.

This is it. First Aiders from St John’s Ambulance are waiting at the bottom of the hill alongside a rugby team of men positioned to catch anyone still travelling at speed when they reach the bottom. Everyone is in place, the cheese roller is front and centre, waiting to release the cheese, the local villagers of Brockworth ready and set alongside their multi-national competitors. 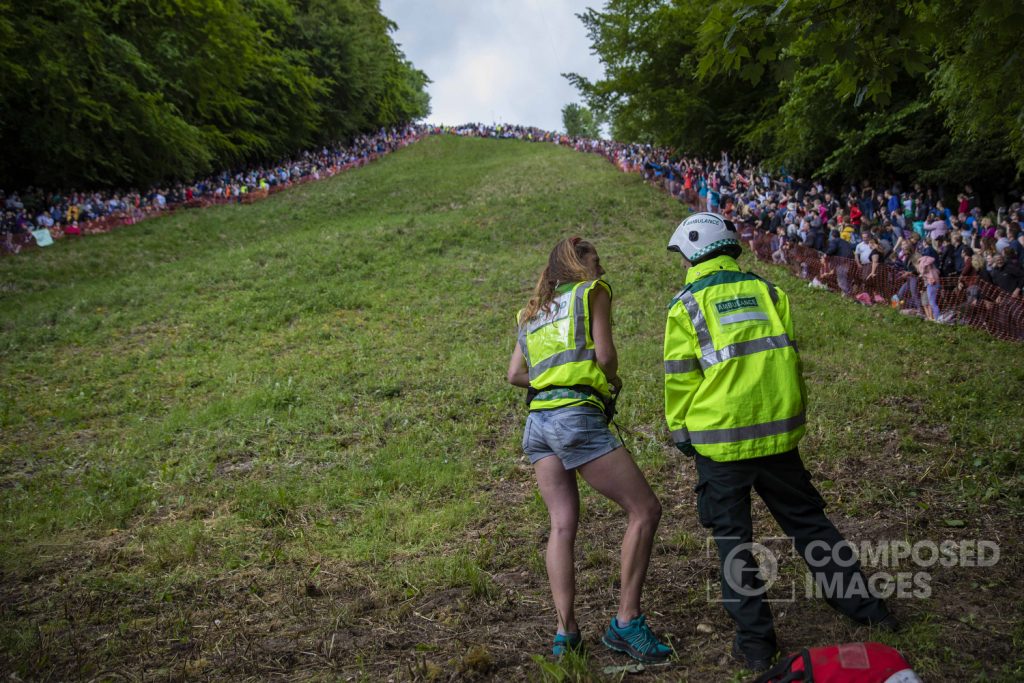 Brockworth, England, UK, May 27th 2019. Medics wait at the bottom of the hill ahead of the annual Spring bank holiday cheese-rolling event at Cooper’s Hill near Gloucester. Traditionally held for villagers of Brockworth, today the event attracts people from across the world.

The cheese is bowled and away they go. 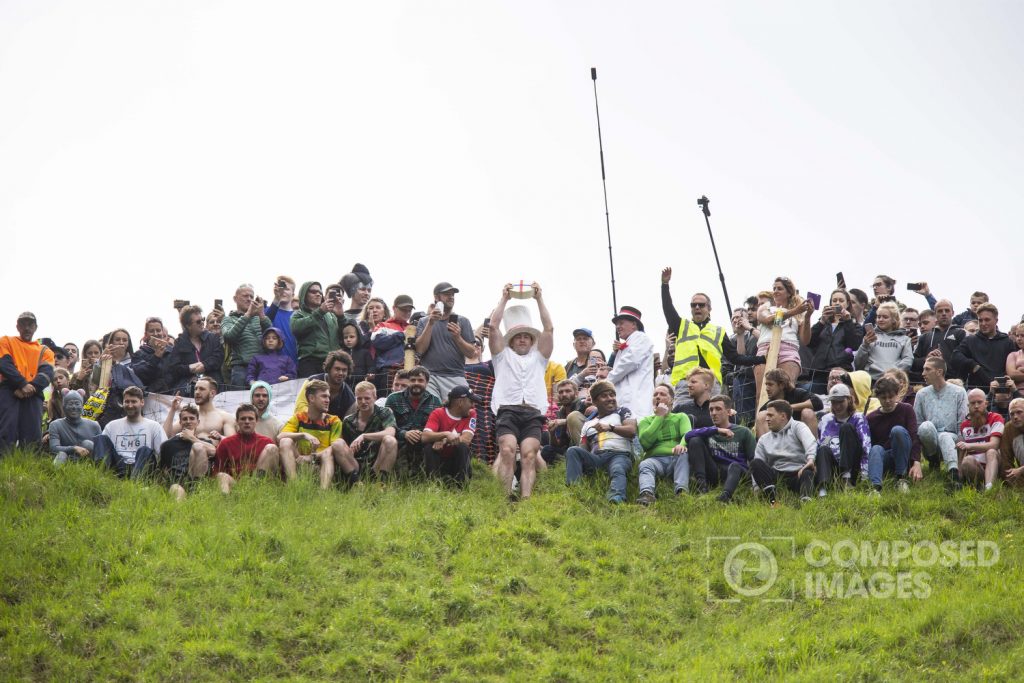 The cheese is held aloft at the top of the hill.

Photographing people hurtling down the hill with wildly varying degrees of control and direction is a conflicting experience. Part of you wants to capture the most dramatic frame possible, but part of you doesn’t want to see something truly awful. But you can’t afford empathy, nervousness or squeamishness. You just shoot.

There are gasps and shrieks from the crowd as hurtling people take hits, bounce back up in the air like rag dolls, complete somersaults and continue their inexorable descent to the bottom. Waves of oohs and aahs are audible from the perimeter, as if watching human fireworks.

Watching through the viewfinder of a camera connected to a long lens, you twitch, knowing the race can’t last long, although there are several more to come. But you probably haven’t captured the thing they are reacting to. What are you missing? It’s impossible to capture everything as the competitors straggle out across the hill. There is too much, a total chaos of bodies and limbs propelled largely by gravity to the bottom. 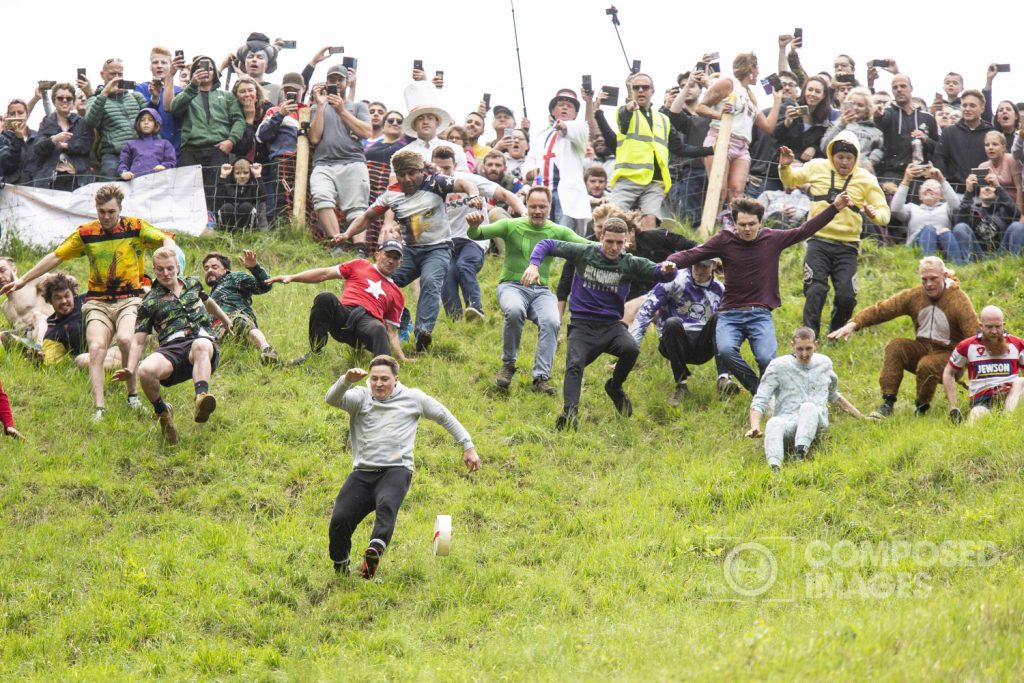 The first race begins with eventual winner Max McDougall in the lead. 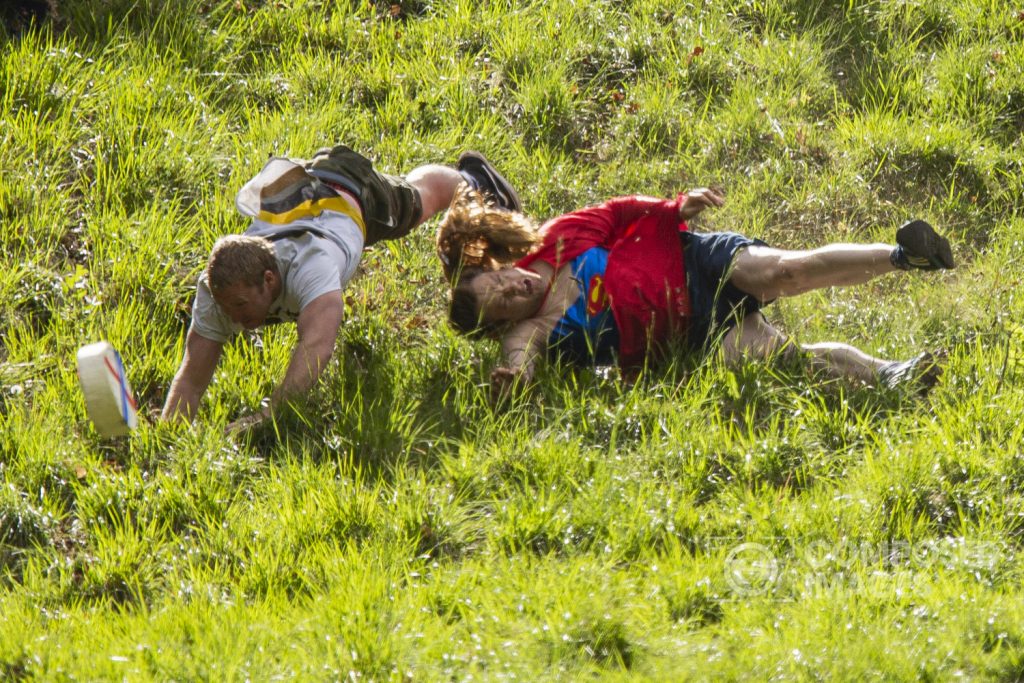 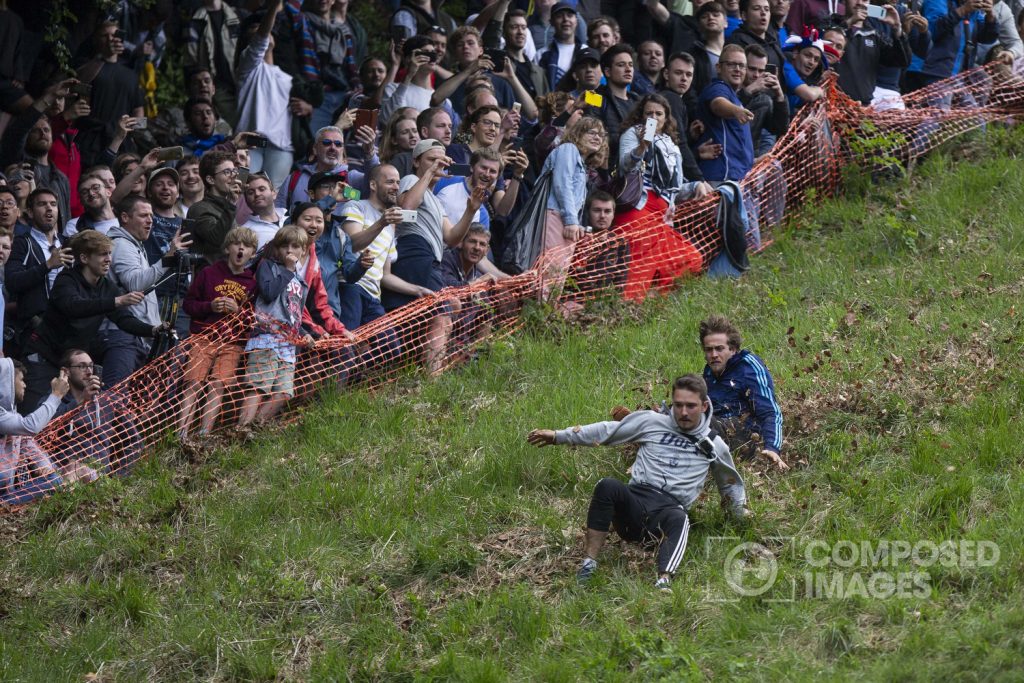 The crowd react as two make their way down. 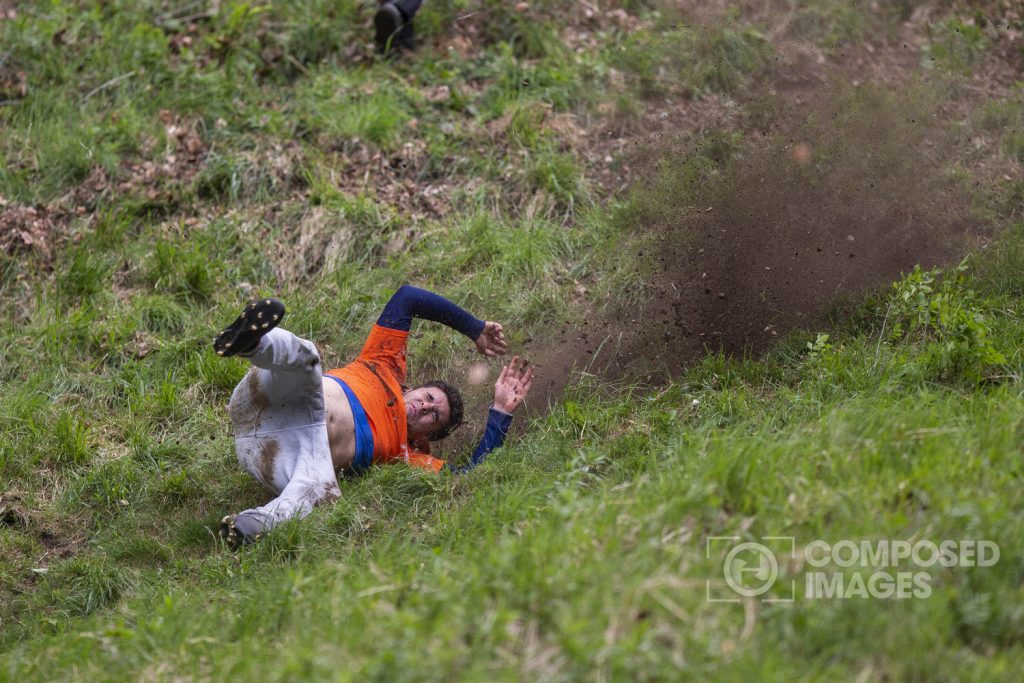 A man in football boots leaves his mark on the hill. 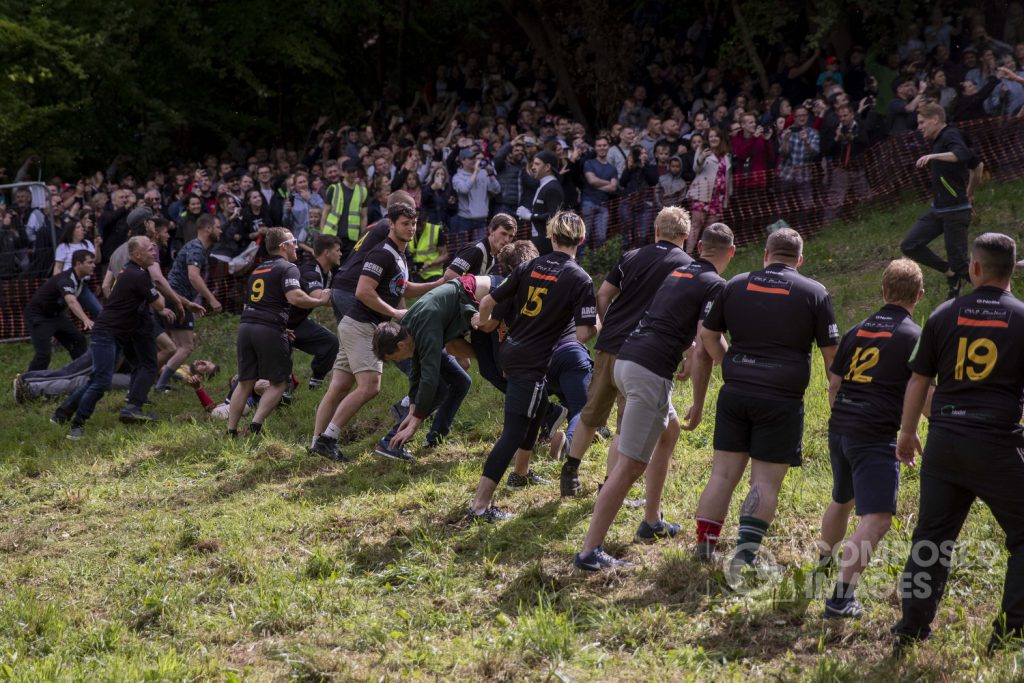 A competitor is caught by a rugby player at the bottom of the hill.

New local hero Max McDougall emerges as winner from the first race, not for the first time. Another villager, a visible beer-fuelled Ryan Fairley takes the second race, although Superman was my personal hero.

You suspect some home bias and that the competitive sporting integrity of the event is not watertight. Villagers appear nicely positioned and get a little head start on the pack. Although it could be argued that experience matters, the locals know the course best. Of course they do. 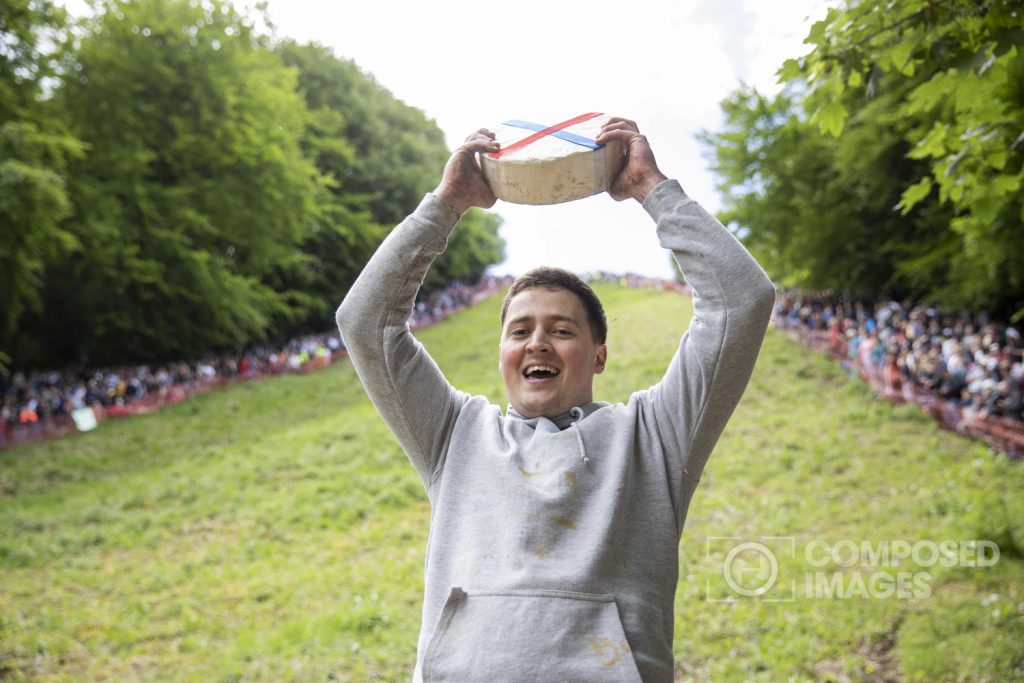 Most bodies are bumped and hurled along with no obvious commanding will. But a select few emit a confident momentary grace as they plummet. With them there is a fleeting semblance of control and intention.

One such is Flo Early. In this small fraction of a second, a shockwave shudders through her cheekbones. She appears skeletal, almost paranormally flighted down the hill. 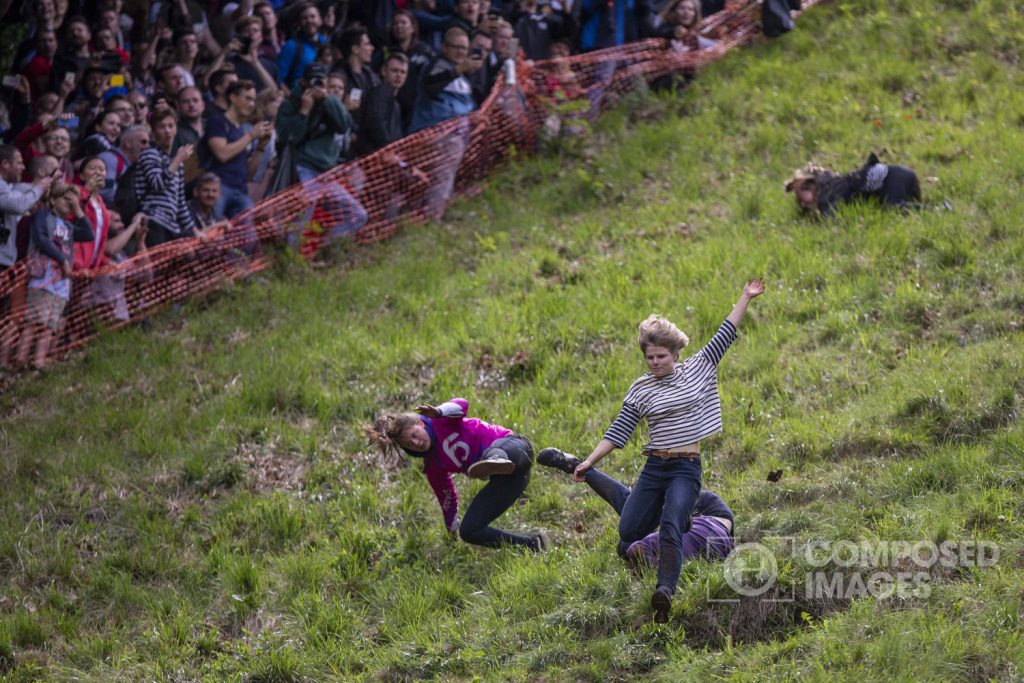 Already a seasoned multiple winner, she goes on to win the Women’s race and speaks to the media afterwards. She knows tips and tactics (go fast at the start and let the hill do the rest, aim for the gate). Her ankle is hurt but she is all smiles, not observably fuelled like the previous winner who had discarded cans of Stella Artois on his way up the hill. She says this will be her last time. But how many say that straight afterwards and have second thoughts as the next event approaches, remembering the indescribable buzz? 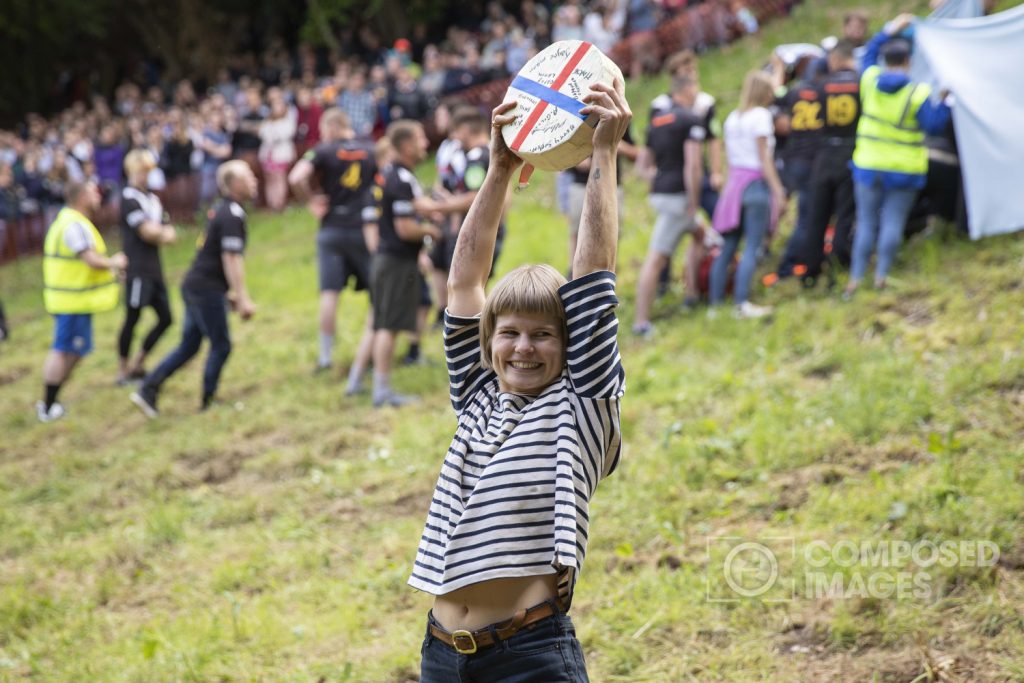 Flo Early celebrates winning the Women’s Race as a protective tent is erected around a casualty behind her.

There are uphill races for kids and proud parents, and possibly for adults, during which I took a moment to begin processing images to submit to media picture desks. 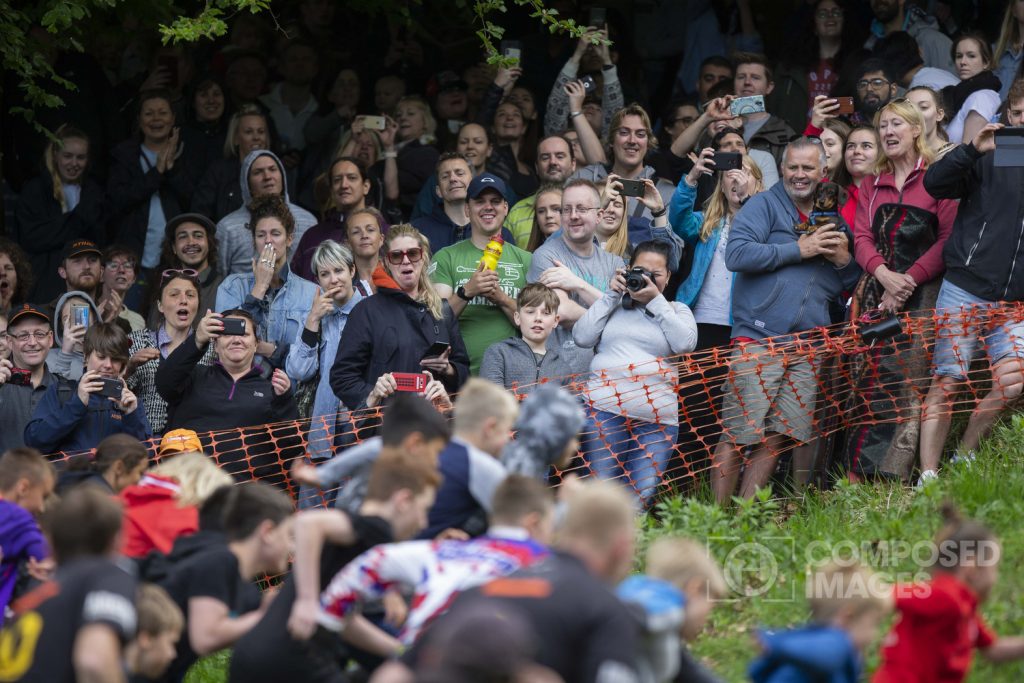 Parents watch and photograph as the children’s uphill race begins.

In the final race an overseas visitor is victorious. Mark Kit from Toronto in Canada could not be more elated. He gives a glorious whooping, fist-pumping celebration. His couch-surfing host appears to be almost equally buzzing. 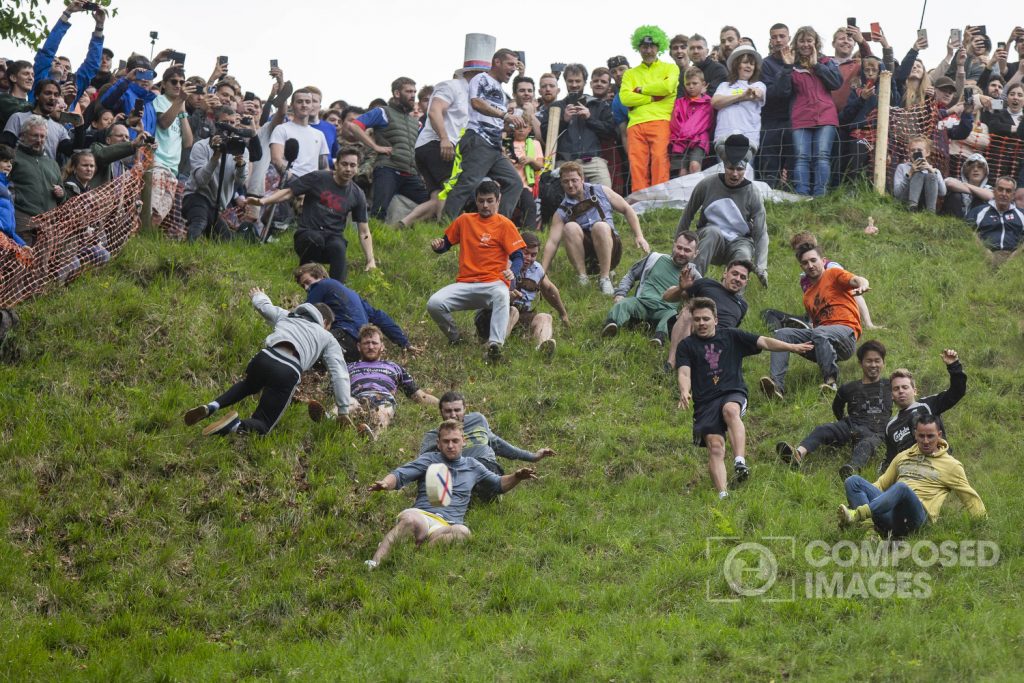 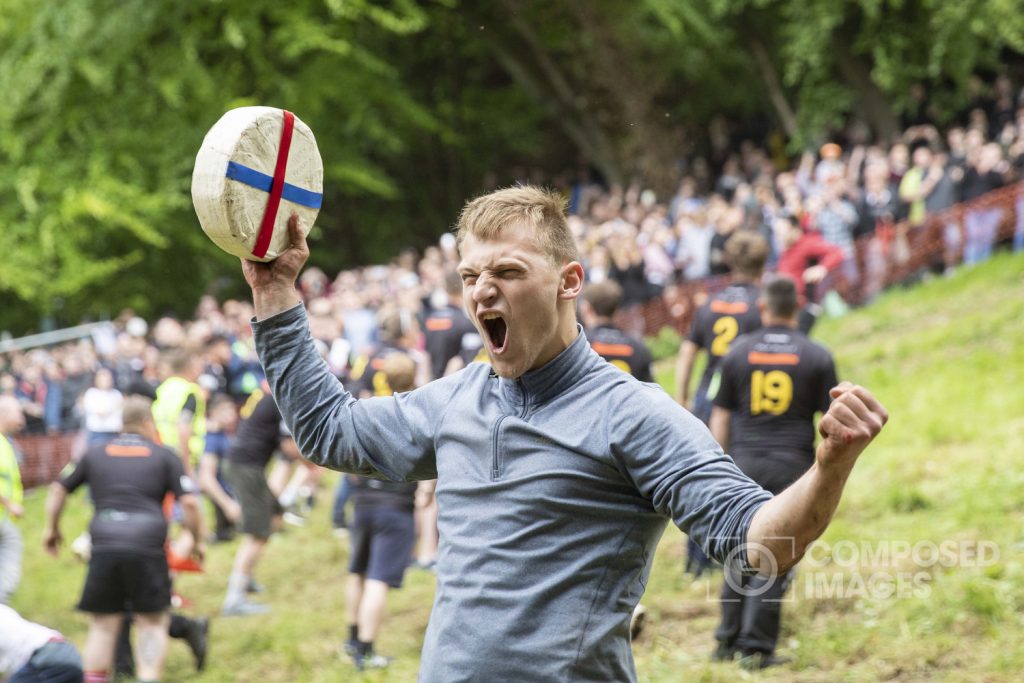 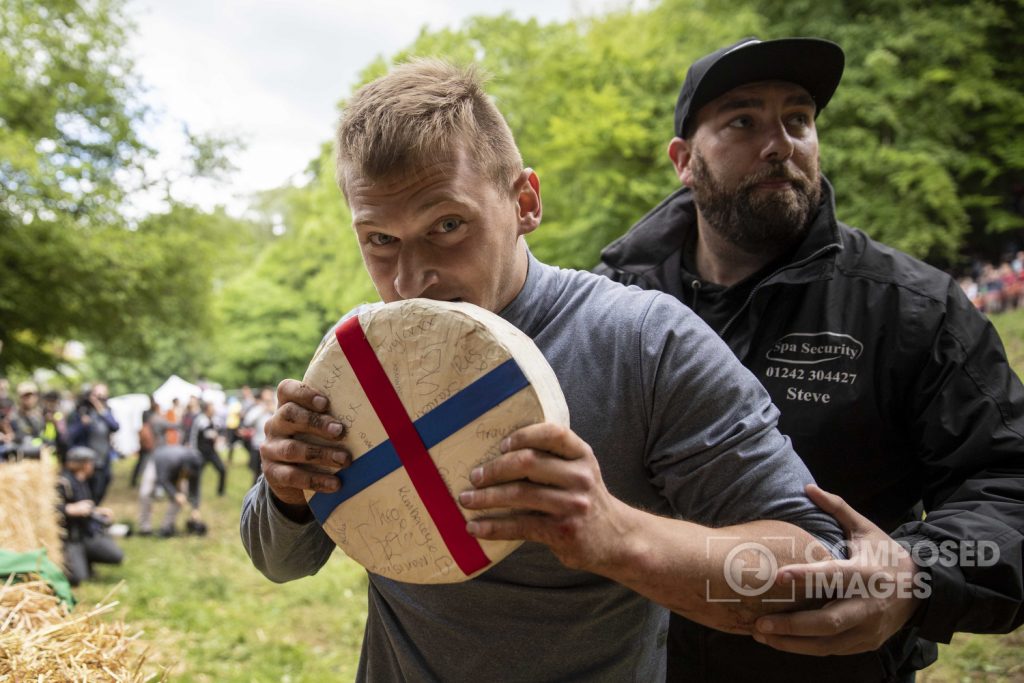 Mark Kit, 29, from Toronto in Canada takes a bite of cheese after winning the final men’s race.

Still photographs barely do the hill justice, especially on a longer lens cropped in. You can’t appreciate its scale or belly-dropping gradient. You don’t have a sense of the speed or bone-crushing impacts. Should I have dabbled with a slower exposure to exaggerate the movement? Or a multiple exposure? Or shot some video? I also wondered if more unusual images couldn’t be achieved from the sides rather than from the hay bale press pen at the bottom. Of course a number of participants wore small cameras which doubtless provides an authentically bumpy, disorientating perspective.

But maybe cheese rolling is impossible to translate through any media. Owning the full experience of this event means sensing the fear and terror in the pit of your stomach, tasting the grass and dirt in your mouth. It means feeling the blood-pumping exhilaration and the limbs straining and the endorphins flowing and the acute pain. It means doing it yourself. 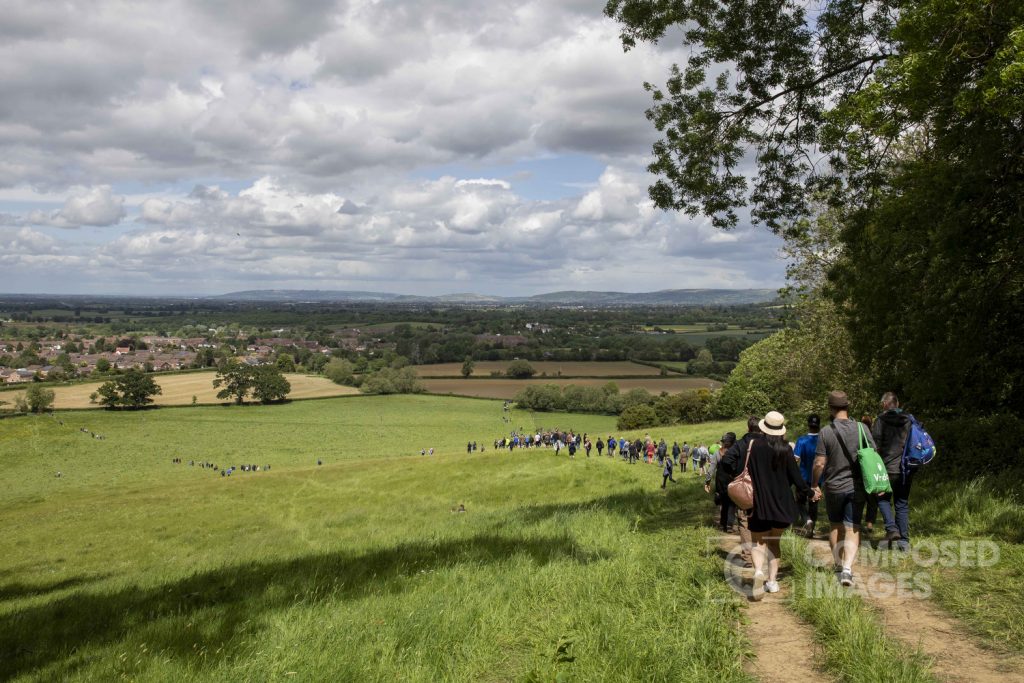 Great pics, how do you get a pass to be at the bottom for pics ?

Thanks, suggest you turn up early and nicely ask a person who seems to be in charge. That’s basically what I did.

Hey thanks, I’ll have to check what time it starts.