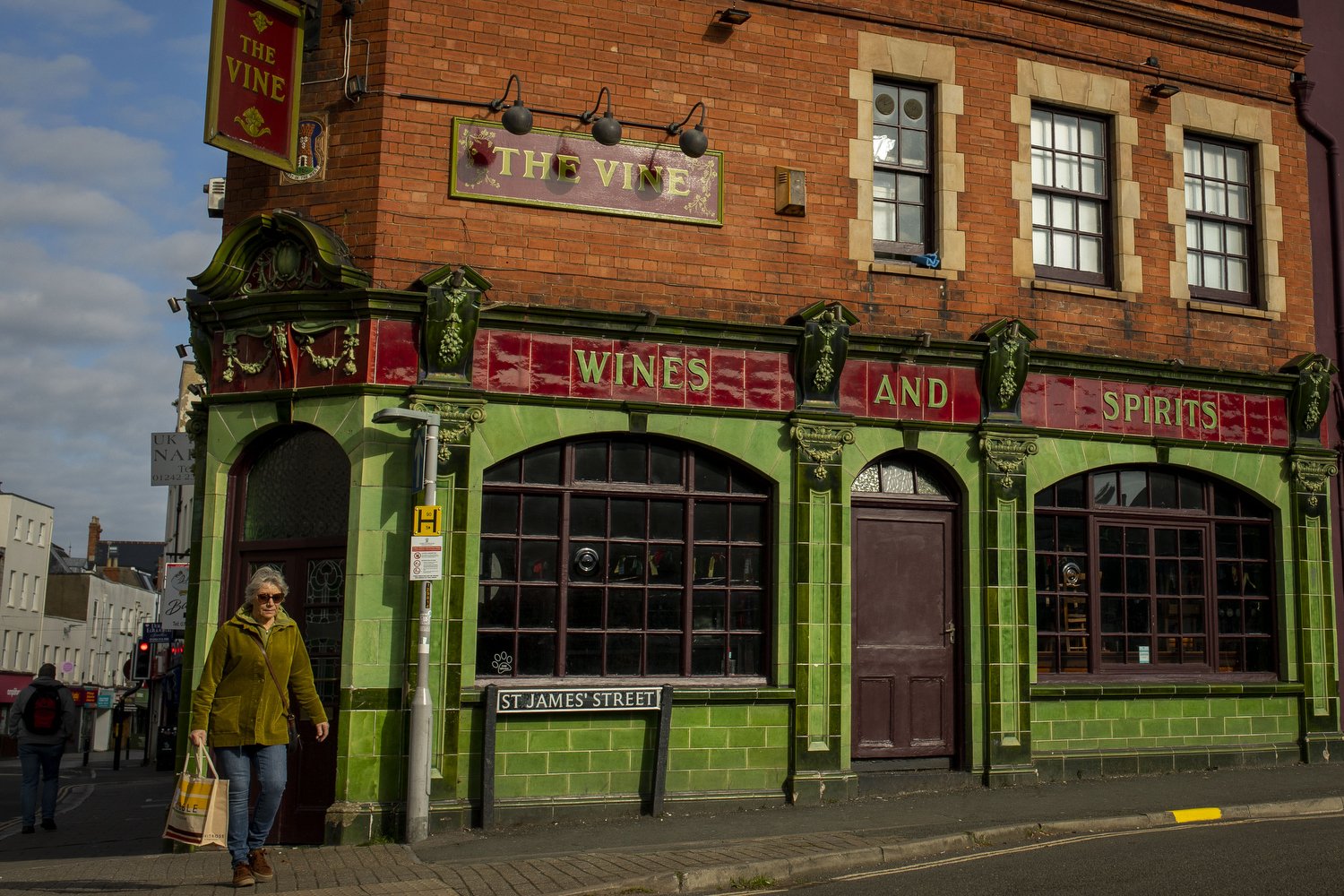 Street photography in Cheltenham was a new experience fo me. In recent years I have visited the town only to shoot occasional football matches, quick in-and-out trips, never hanging around. But having studied for my A Levels at a college in the town in the late 1990s, and later living there for 18 months in my mid 20s, I felt mildly nostalgic for the place and wanted to get some street material down the lens. Finally, a chance presented itself in April 2022.

Like nearby Gloucester, Bristol and Bath, the history and culture of Cheltenham imposes itself, often through distinctive Georgian architecture. I was struck, as usual, by how different it feels to towns and cities over the bridge in Wales. A short distance over the border in England, you find more obvious history, grandiosity, some might even say pomposity. Walking around the town, you can’t escape the feeling that Cheltenham, its buildings and its people, are all rather posh. It’s like an early step on the privileged golden pathway onto Oxford, and then to London.

[Visit the 2015 piece about street photography in Oxford]

There’s a sense of history in the surroundings and some artwork, which is amusing to play with in contrasting against the modern. 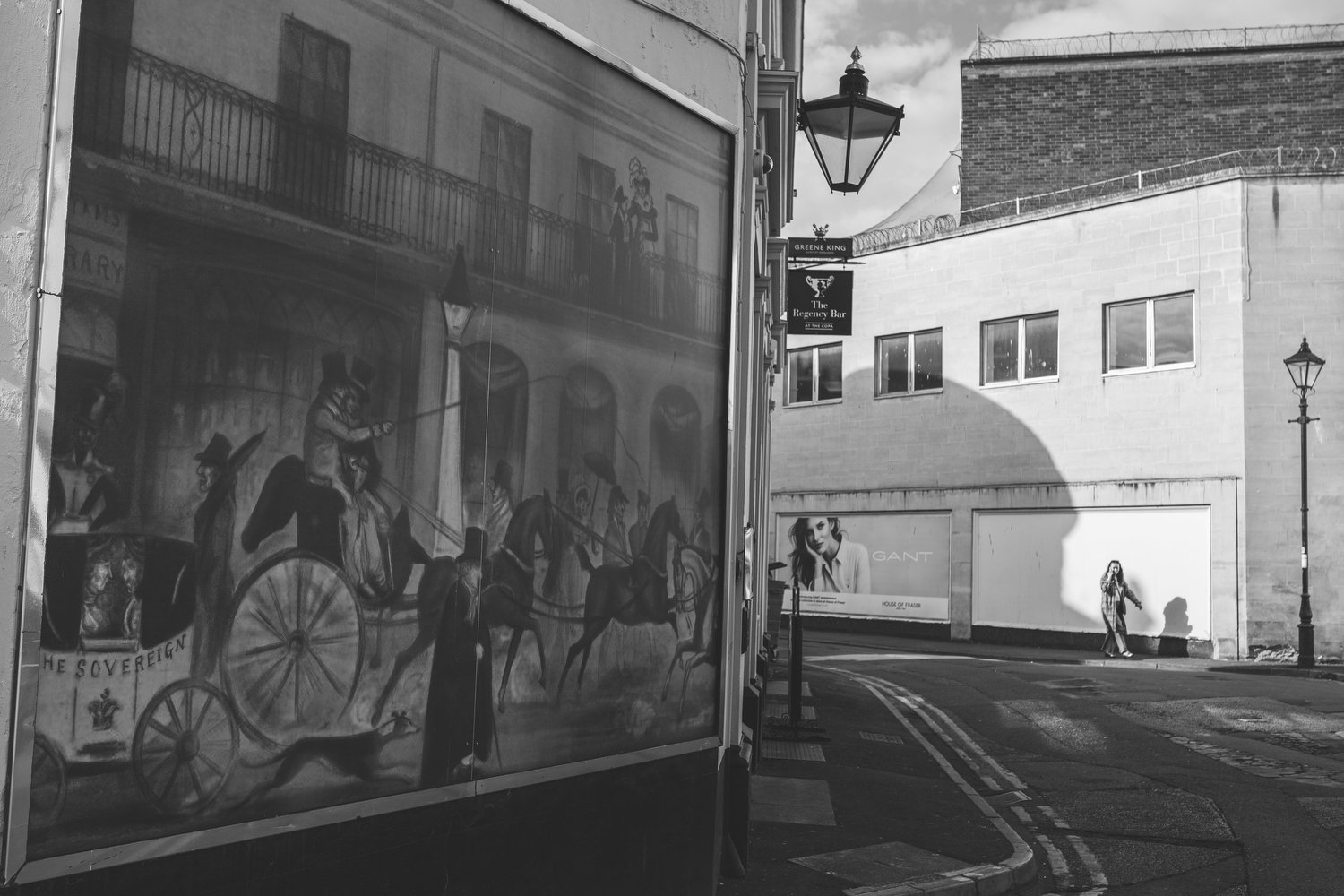 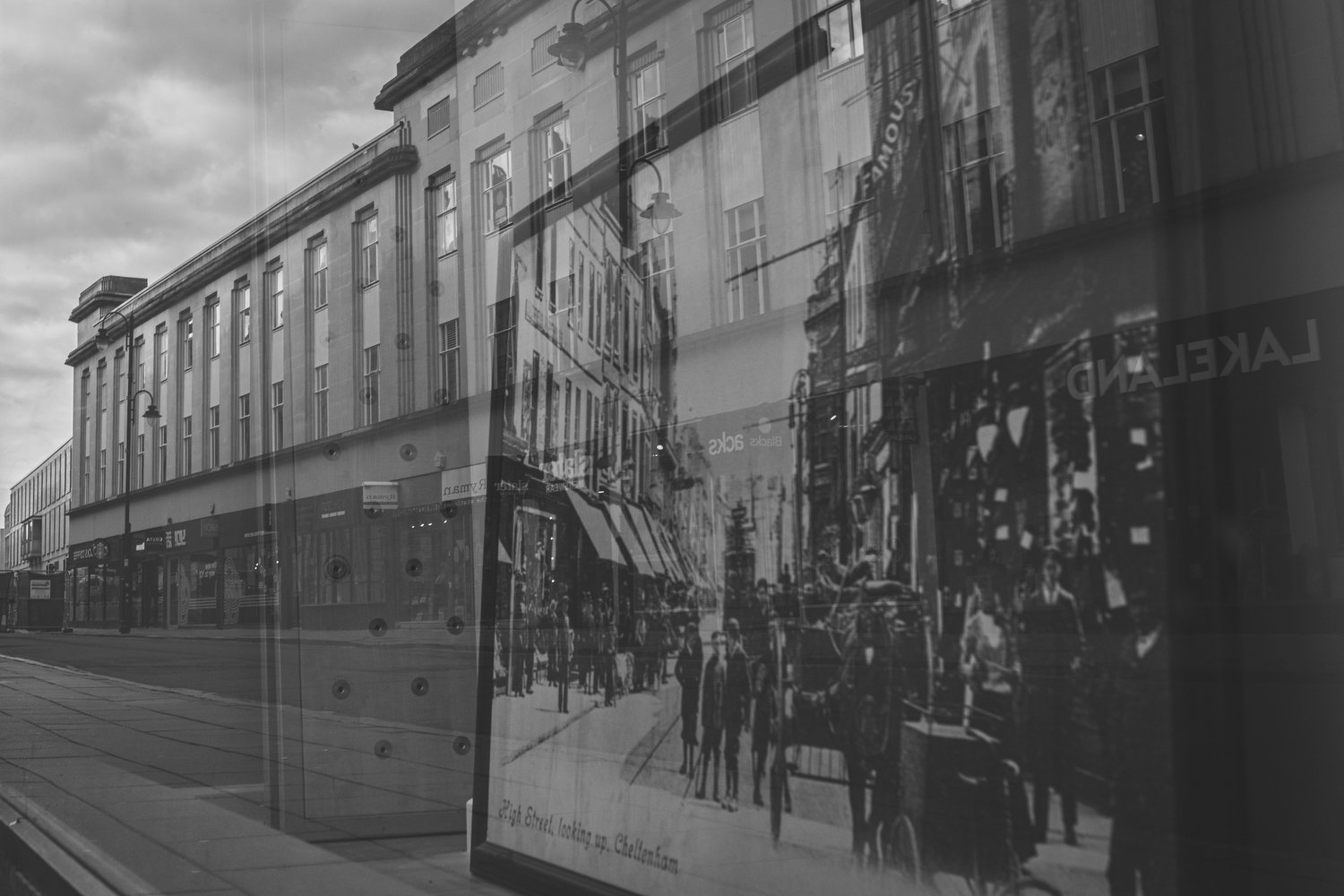 Street photography still stimulates me as a photographer, probably more than any other kind. It is a type of photography in which I feel most creatively and enjoyably alive, alert, present, and in the moment. It comes without the stressful pressure of having to operate because you are a professional, working on a job, being watched, getting paid to capture and deliver specific pictures within a certain time frame, pictures of a kind you have probably already taken countless times before. With most street photography, unless of course you’re working on a specific commission, you are always in a uniquely unrepeatable moment of people just going about their lives. And you might capture nothing of any real value. Your keepers’ ratio might feel unfairly disproportionate to the time you spent wandering around. But it doesn’t really matter.

A woman dressed in a green coat passes the distinctive green exterior of The Vine pub in Cheltenham town centre, April 2022.

The shooting process itself is almost pleasing enough in isolation, without considering the sift and edit and general file administration of the results. That can all feel like a tedious labour in comparison. Pacing streets, observing, waiting for people to align, shooting, moving, thinking: that all feels kind of like painting or drawing or doodling with humans, usually without their awareness, so it can also feel risky or cheeky or reckless at times. Which adds to the small voyeuristic buzz. 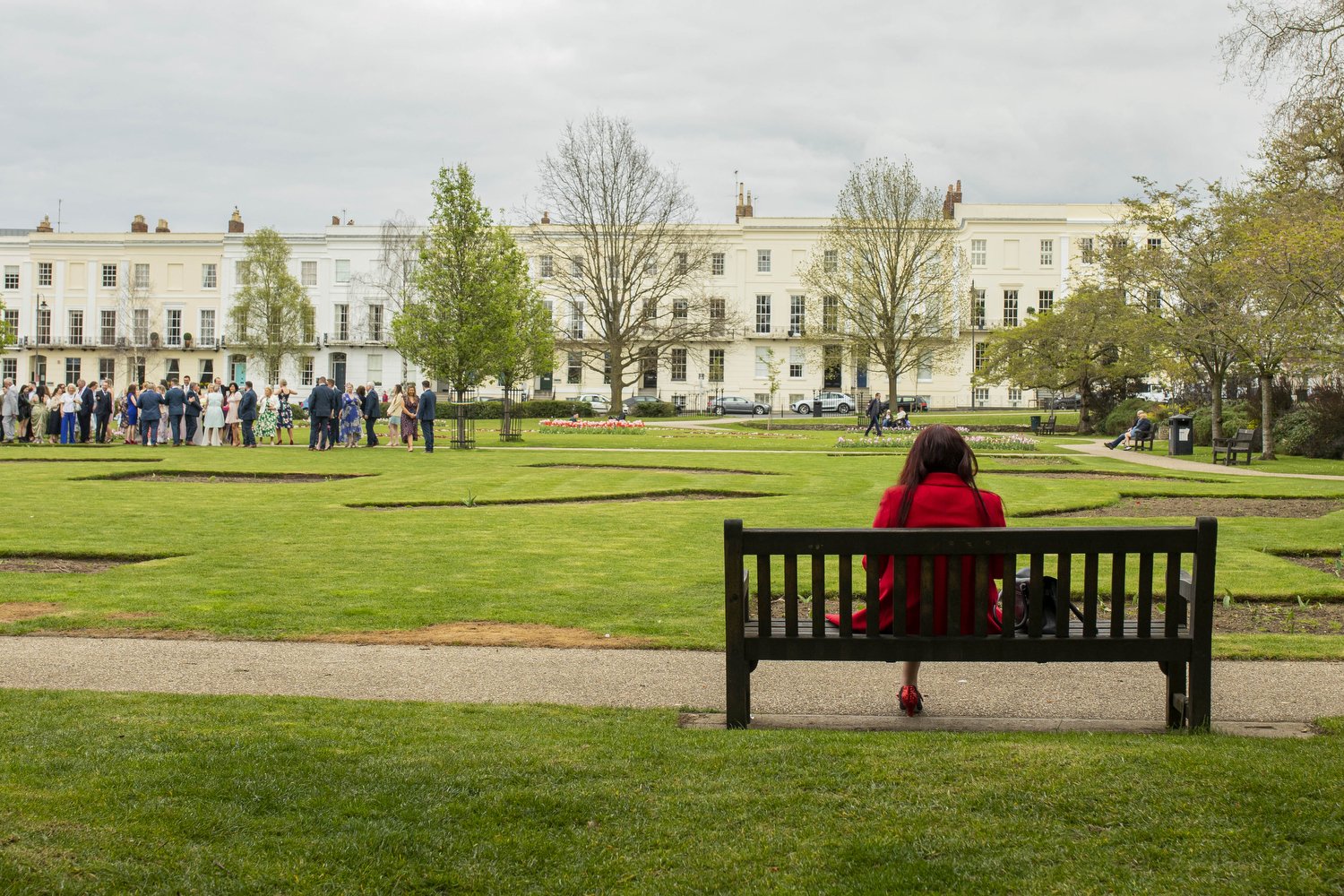 A woman dressed in red, sits on a park bench in Cheltenham town centre, observing a wedding congregation having their photograph taken, April 2022.

[Visit the 2019 piece about street photography in Gloucester]

These days, I often shoot slyly from the hip, carrying the camera casually, discreetly, little finger on the trigger, sometimes facing in the opposite direction to my lens, settings already calculated, trusting in the autofocus. Of course, when shooting like this I’m never entirely confident if my intended focus or composition will be achieved until afterwards. There’s some appeal in the surprise of discovery, the delayed gratification, or in many cases, disappointment. 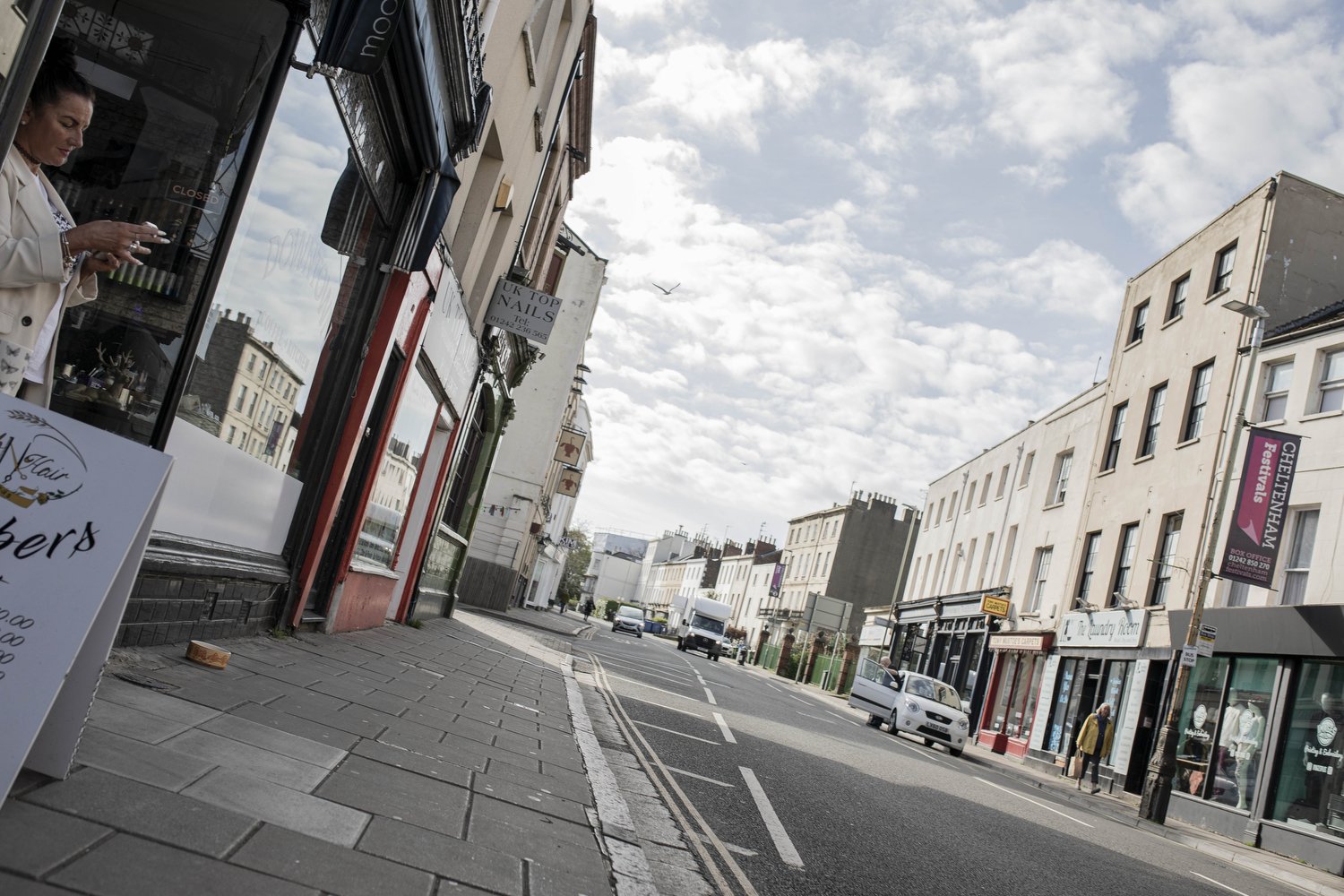 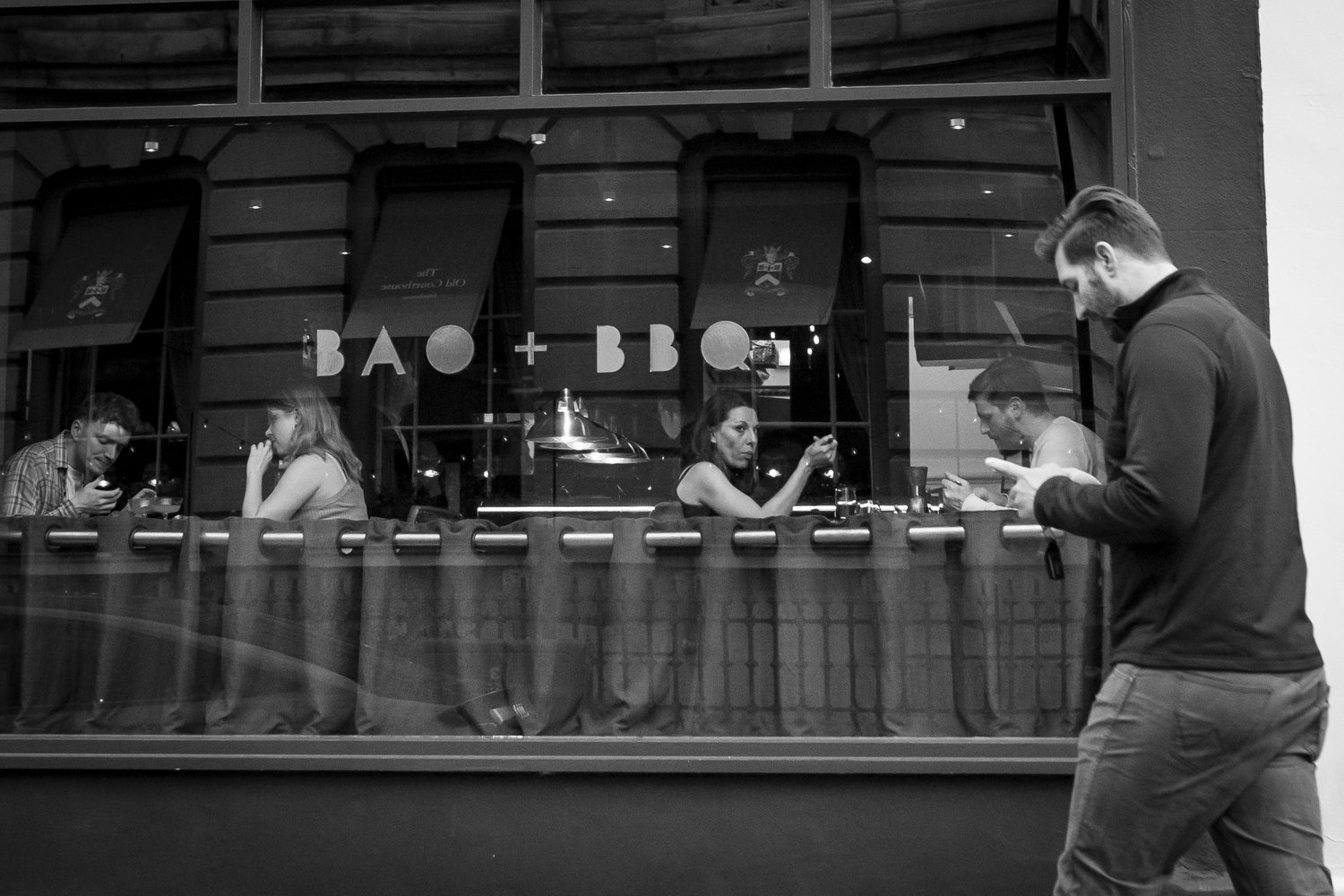 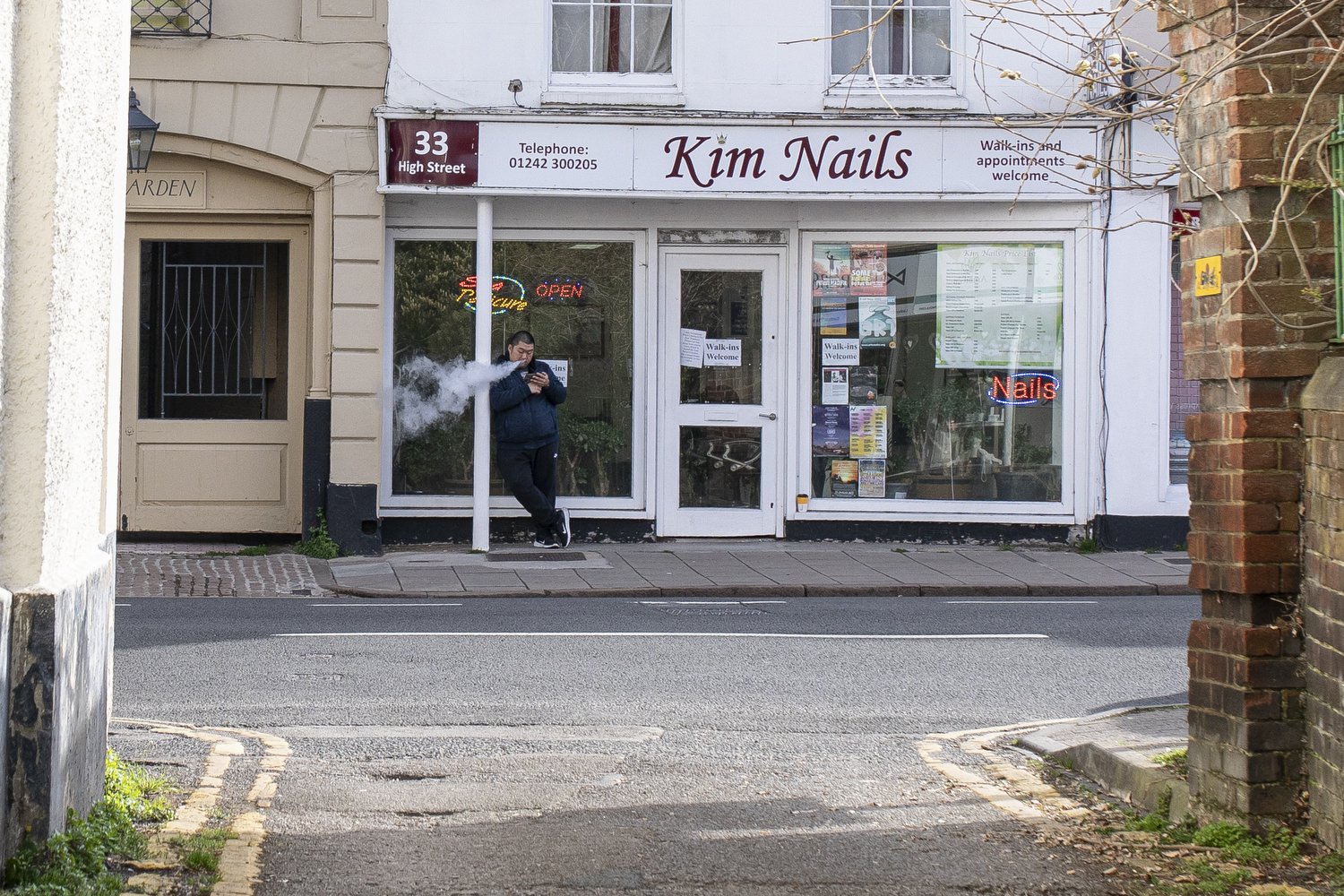