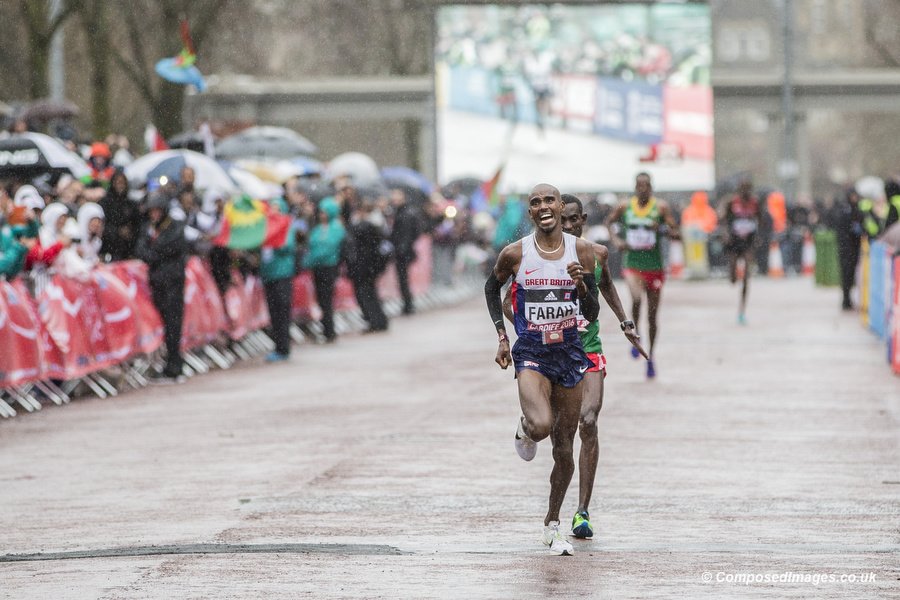 The city of Cardiff won the IAAF World Half Marathon several times over.

Kenyan teams may have dominated in both the men’s and women’s elite events, but the people of Cardiff were also major winners overall.

Cardiff won by being awarded the prestigious IAAF event, following Copenhagen two years ago. It also won in the impeccable organisation, staging and security of such a logistically complex global event. But lastly, and arguably most importantly, it won through the reception of the event by the city’s people.

The IAAF / Cardiff University World Half Marathon was fully embraced by the public here. It brought a lot of people into the city and businesses benefited. You could sense the city’s population swelling on Thursday and Friday, as the running expo at the Motorpoint Arena began. This continued all the way through to race day. 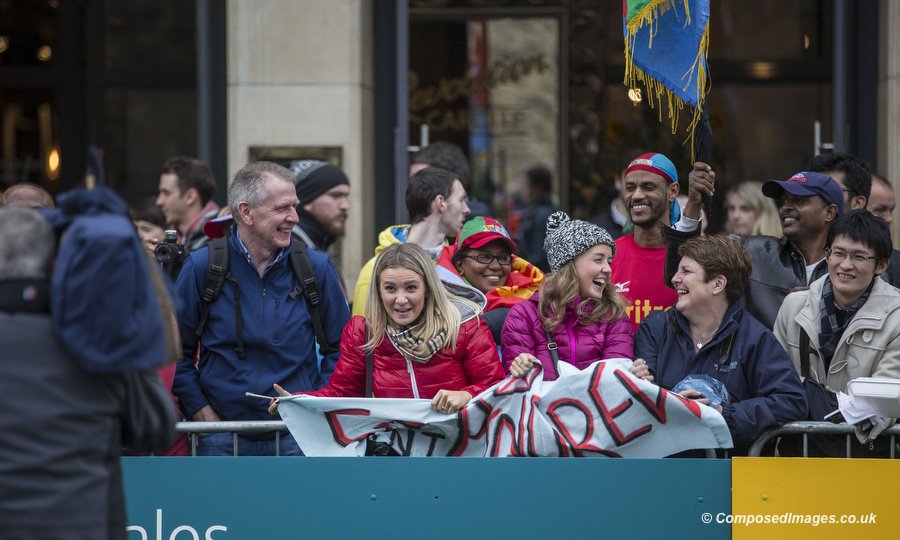 Spectator fun on the start line.

The expo included inspiring talks delivered by a number of people, including running legends Paula Radcliffe and Mo Farah.  Many keen looking people in sportswear arrived in the town, some of them sporting the colours of the nation they were representing.

It was a major global event, not without an edge of tension given the week’s terrorist attacks in Brussels and a brief bomb scare in The Hayes shopping quarter of the city centre on Thursday. Thanks should go to surveillance and intelligence services, as well as police for ensuring the safety of the masses.

After photographing a Welsh Athletics indoor meet a couple of months earlier, I was looking forward to photographing this athletics event.

The weather was unkind when the big day came. Whereas Good Friday was exceptionally good, bright, sunny, mild, on Saturday the heavens opened in spectacular fashion. It was grey and overcast for a time, uninviting for the hundreds who lined the city’s streets. But out they came regardless.

There was drizzle and then steady rain began to fall just as the elite women started.  Worse was in store. We had an old fashioned torrential Cardiff monsoon, shortly before the elite men arrived on the home straight. This meant that most of the mass participation runners were only a short way into the course, and had to persevere while extremely wet and cold.

Photographing the World Half Marathon – from a motorbike 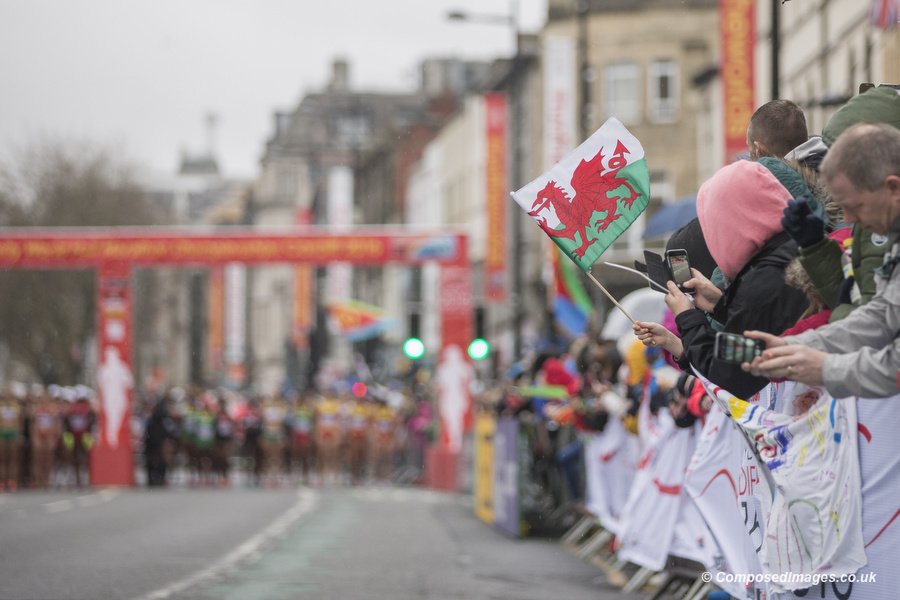 I had planned to stay fairly local to the start and finish points. Given the times the elites would manage to run the course in, there wasn’t much time to play with. But during the photographers’ briefing in the media centre beforehand, we were told there were spare motorbikes designated to take photographers wherever on the course they wanted to go. Perhaps others were rightly nervous of the wet conditions. 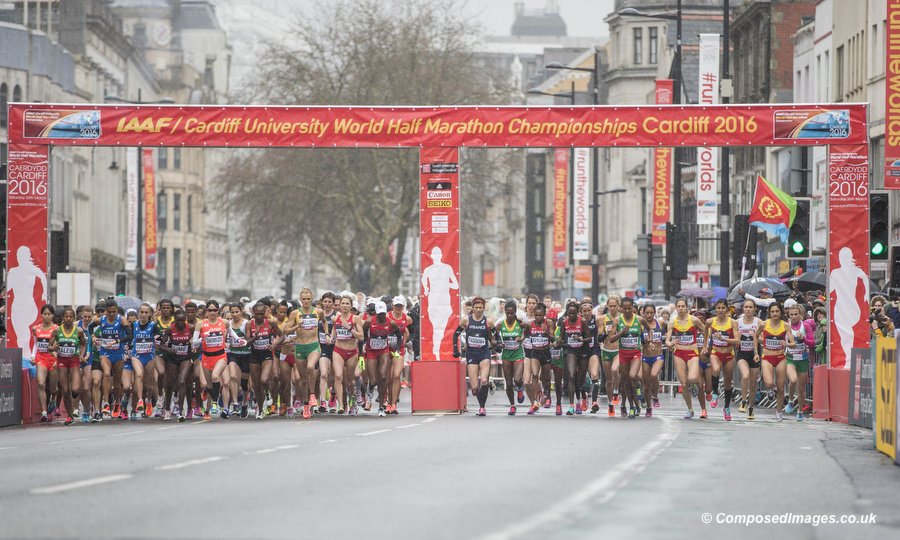 Away they go. The starting line of the elite women’s race during the IAAF / Cardiff University World Half Marathon Championships in Cardiff City Centre, March 26th 2016.

When nobody else raised their hand to request one, I found mine creeping upwards. There was a chance of new experience and I tentatively accepted it.

Riding backwards on a motorbike while trying to photograph feels all kinds of wrong. The physics of being pulled backwards, not being able to see where you’re going, holding expensive camera equipment, maintaining your equilibrium, thudding briefly skywards off unexpected speedbumps in the pouring rain: it feels dumb, reckless, dangerous. But fun.

It also offered me a great look at the course and the tremendous Cardiffians lining the route. 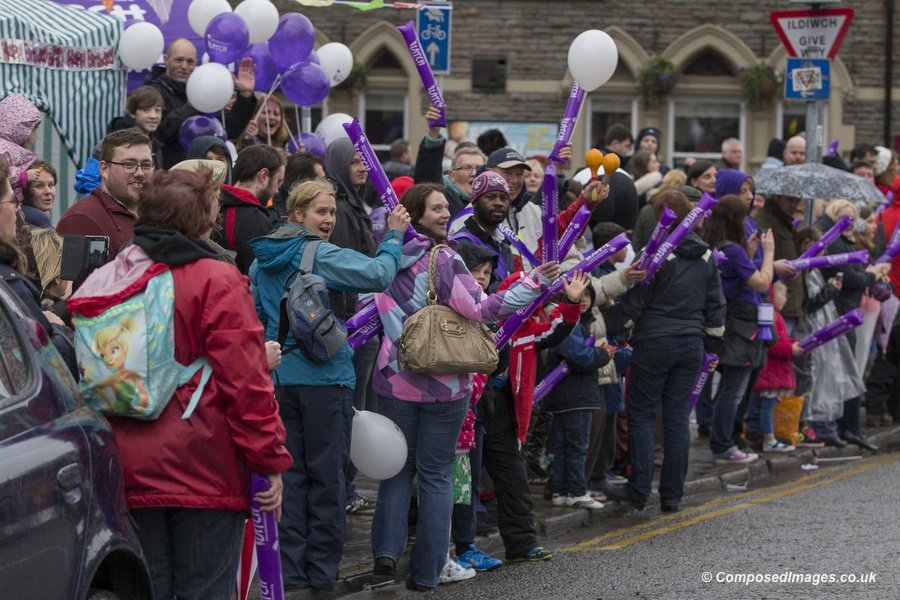 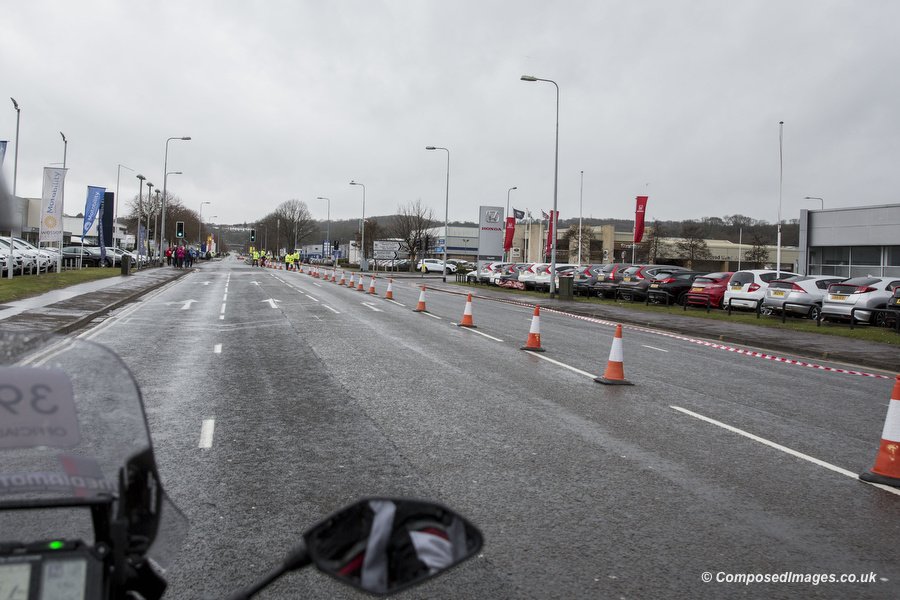 From the start line we headed to Leckwith, past the stadium, to Penarth Road and then down to Penarth itself. I had wanted to get some shots from the Barrage, one of the more scenic points overlooking the estuary. After photographing a number of mass participation events for official suppliers in the past, including the annual Cardiff Half Marathons, I had found the mast gives a nice background, as well as the channel itself. 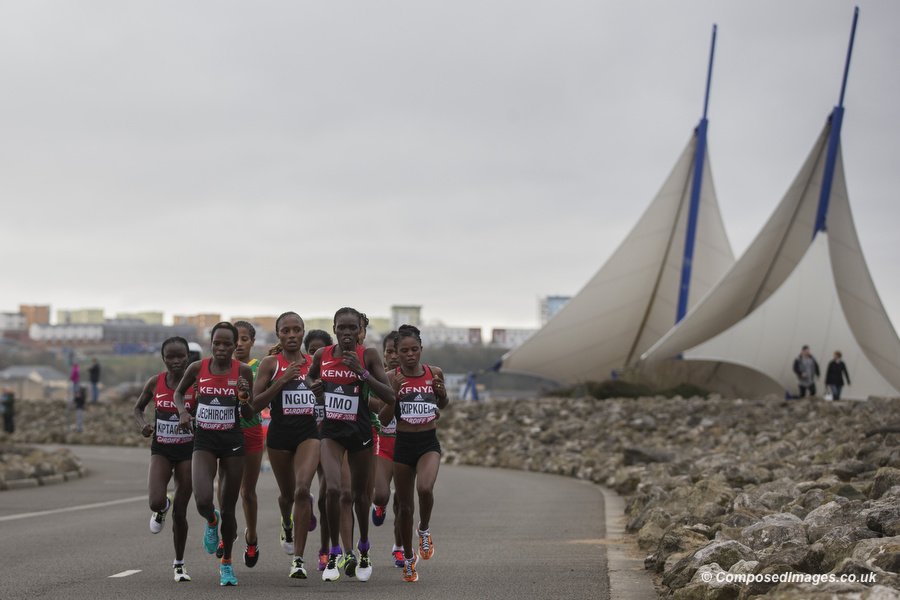 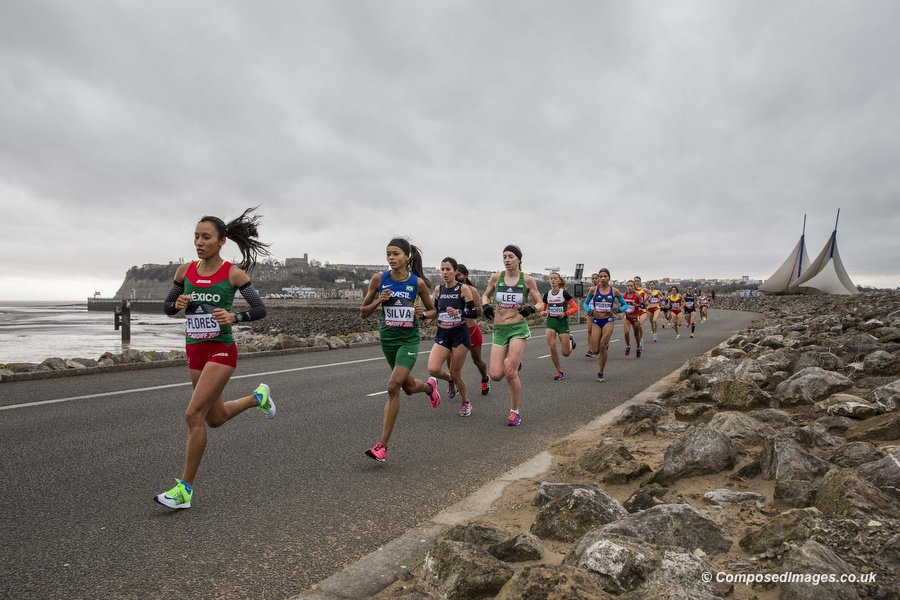 When Mo arrived, he was a short way behind the condensed Kenyan team, with motorbikes of cameramen following closely. 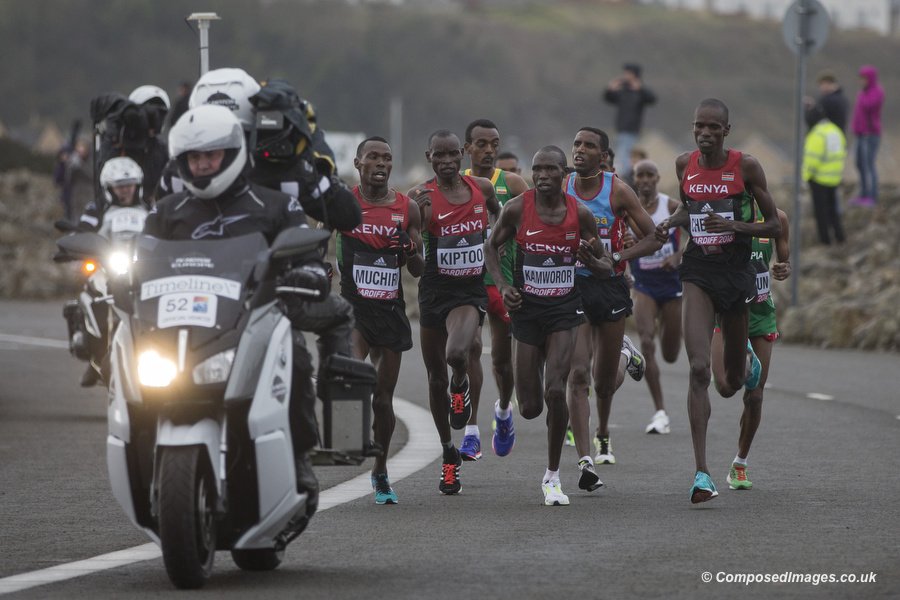 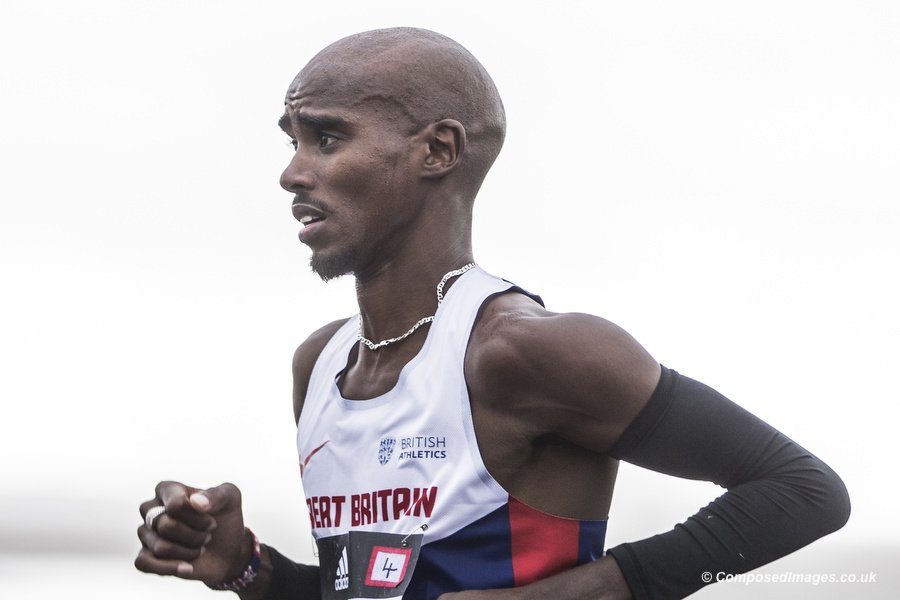 The other motorbikes and general cavalcade wasn’t helpful for a scenic wide shot, so I went in closer.

We set off again, allowing me to photograph some of the leading pack as they made their way around the streets of Cardiff Bay, before heading up through town, over Newport Road, down Richmond Road and into Roath, along Albany Road and Roath Recreation Ground. 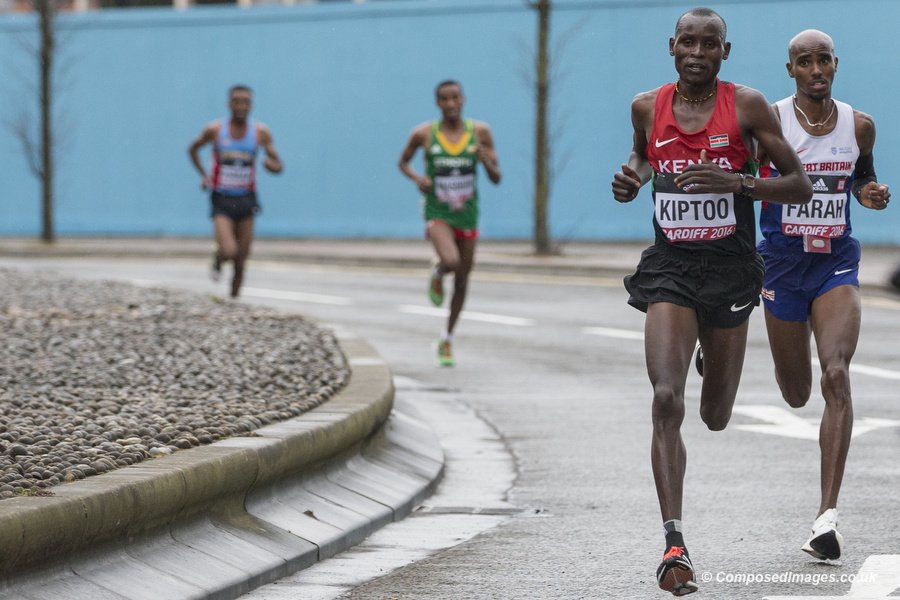 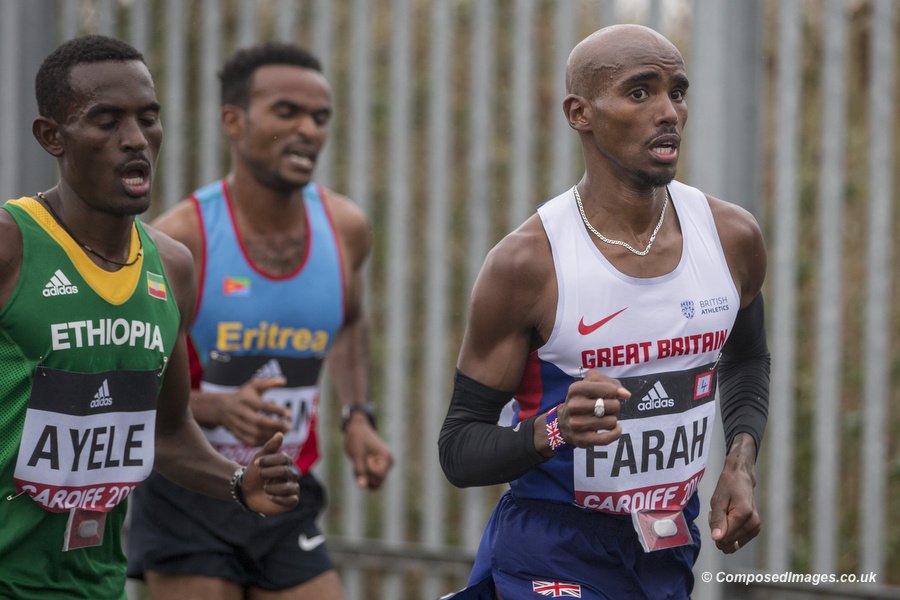 I felt fraudulent when we were cheered through a few minutes ahead of Mo Farah and the Kenyans, like that should be reserved for the runners. But thanks anyway, to the people of Cardiff who cheered the photographer on Motorbike Number 2. As well as spectators, the event was helped by the many willing volunteers along the way. The spirit of Cardiff people certainly shone through, even if the sun didn’t. 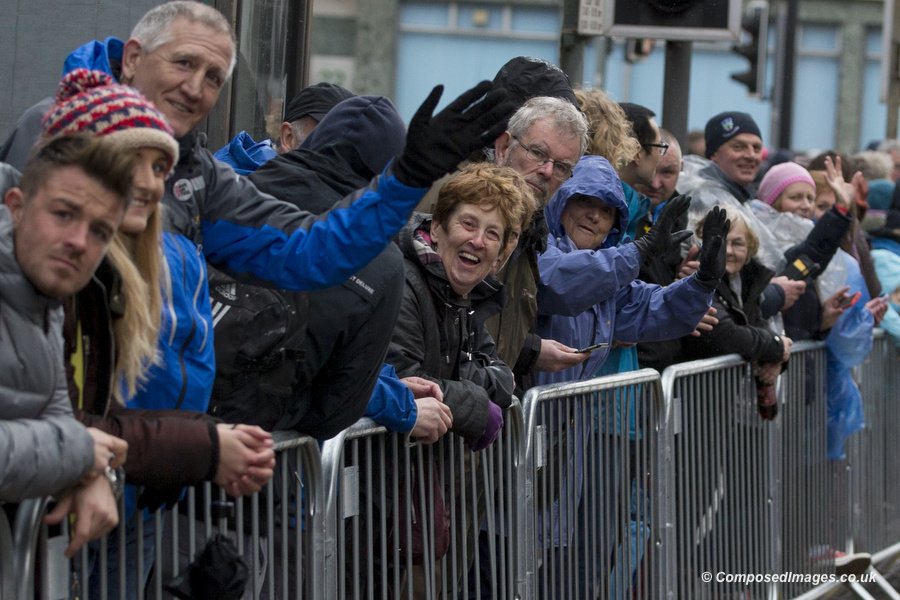 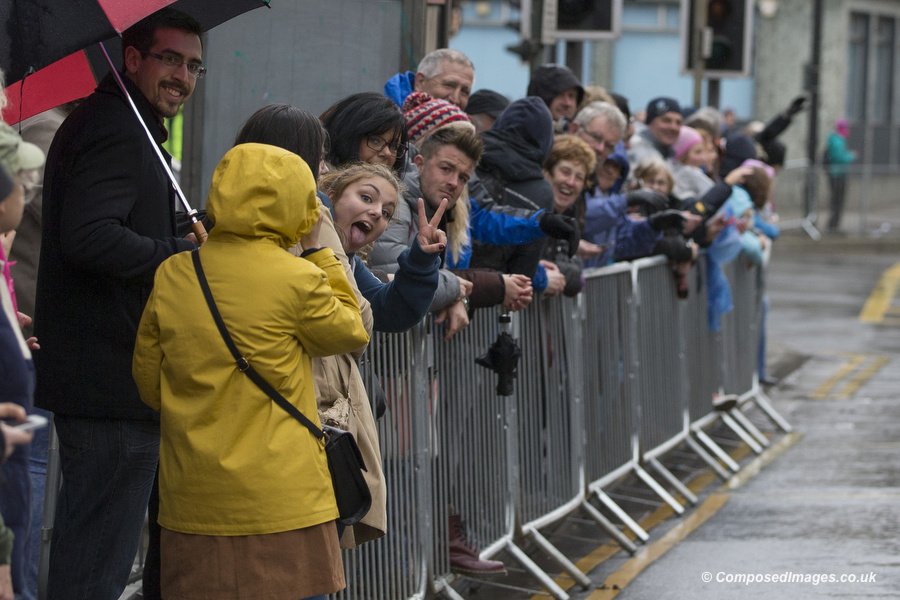 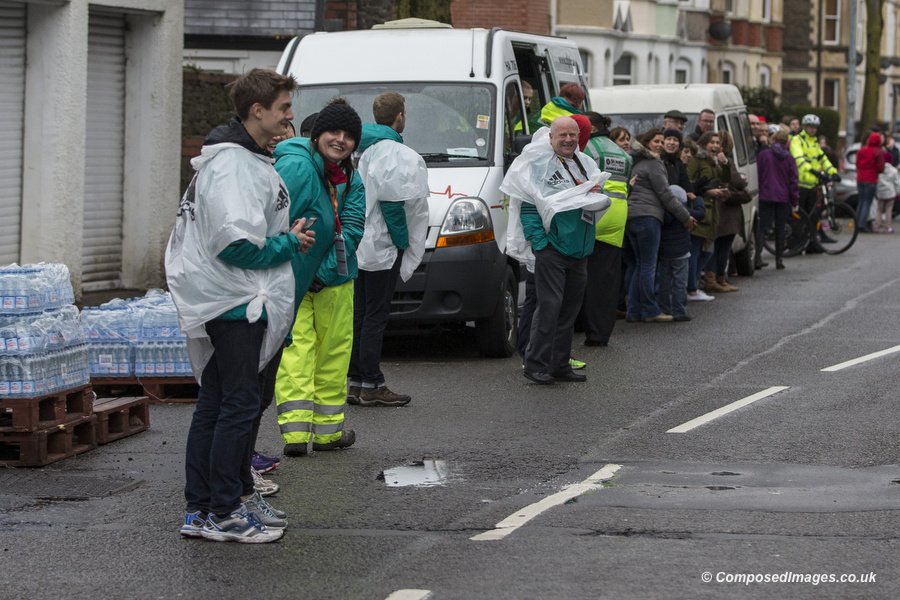 Passing the elite women runners again, we climbed up Allensbank Road and hurtled down Cathays Terrace before I hopped off at the finish line, grateful to be in one piece. 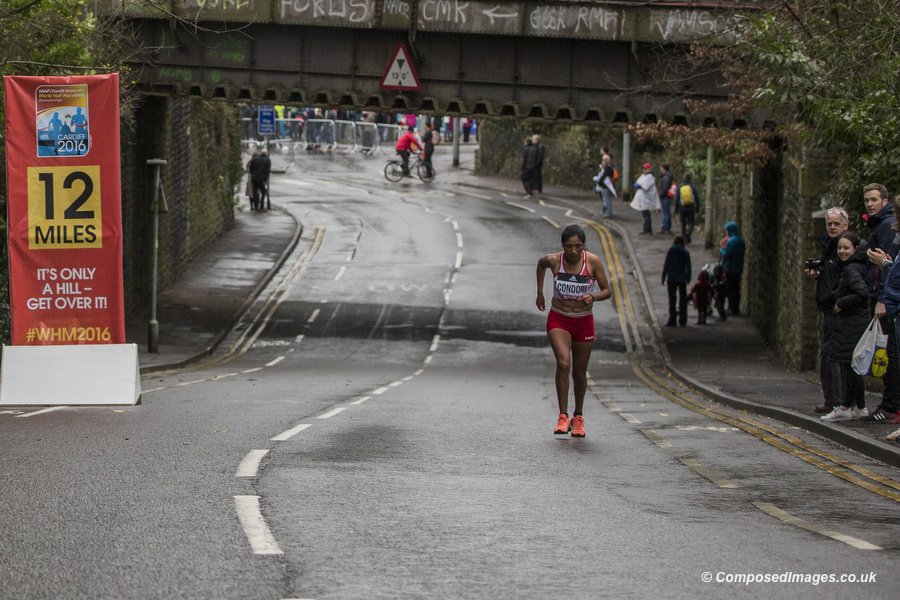 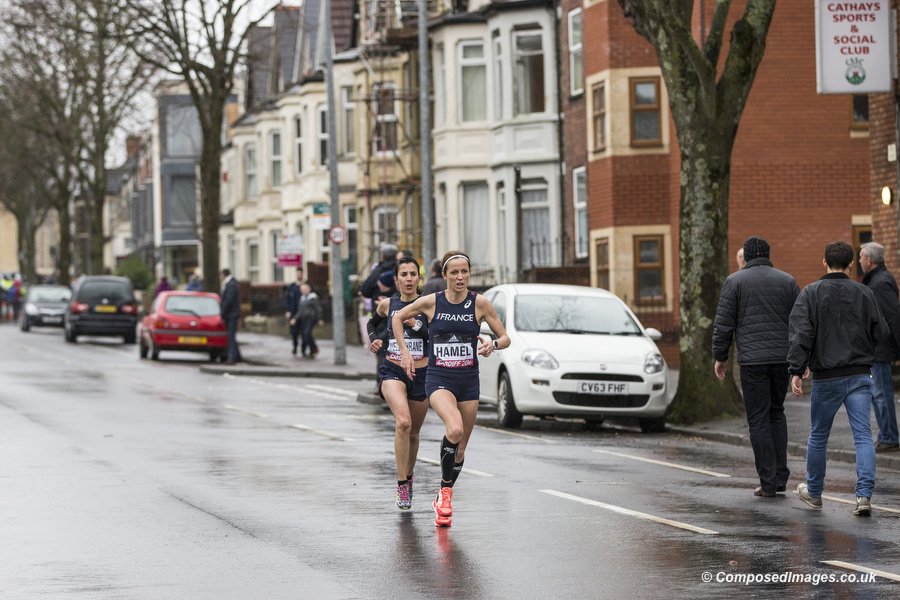 The Half Marathon Finish Line

While I’d forfeited my chance of seeing the medallists come in by taking the motorbike to the Barrage, I was able to capture some of the female finishers, a number of whom appeared completely spent.

This Italian runner on the right seemed to be aptly named. 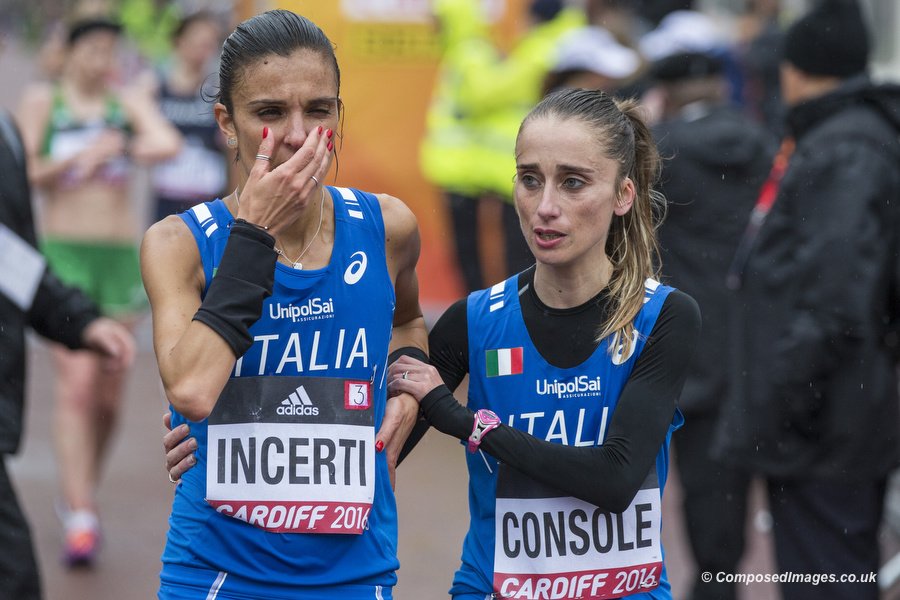 It was around this point that the monsoon really began to kick in. Here was a proper howling, raking downpour of the kind you unfortunately have to withstand when regularly photographing sport in Wales. It came down so hard that for a short time I crawled and hid like a total coward in the three foot gap beneath the photographers’ platform overlooking the home straight. 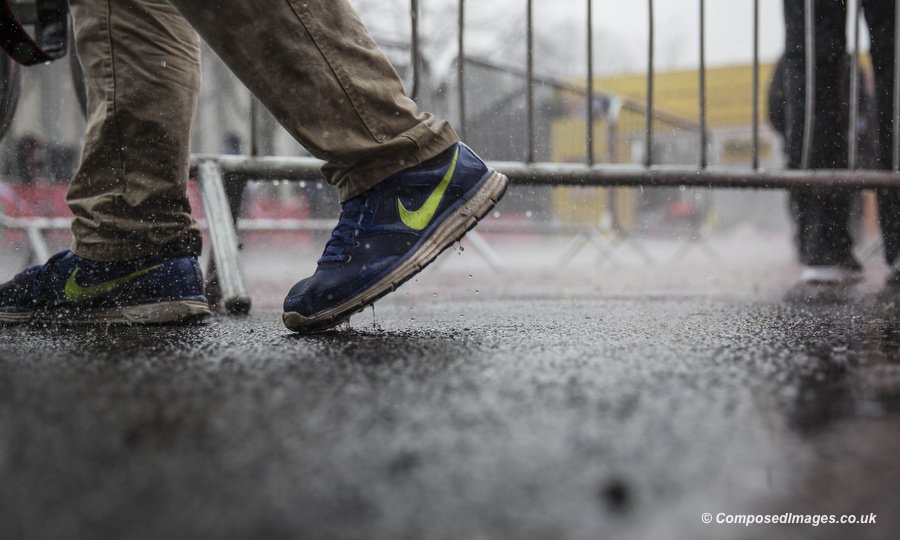 Thankfully it eased for the arrival of the first elite men.

They were led home by the favourite, Geoffrey Kamworor of Kenya in a time of 59.09. This was, I learned from other photographers, despite his fall at the start line after a tangle. 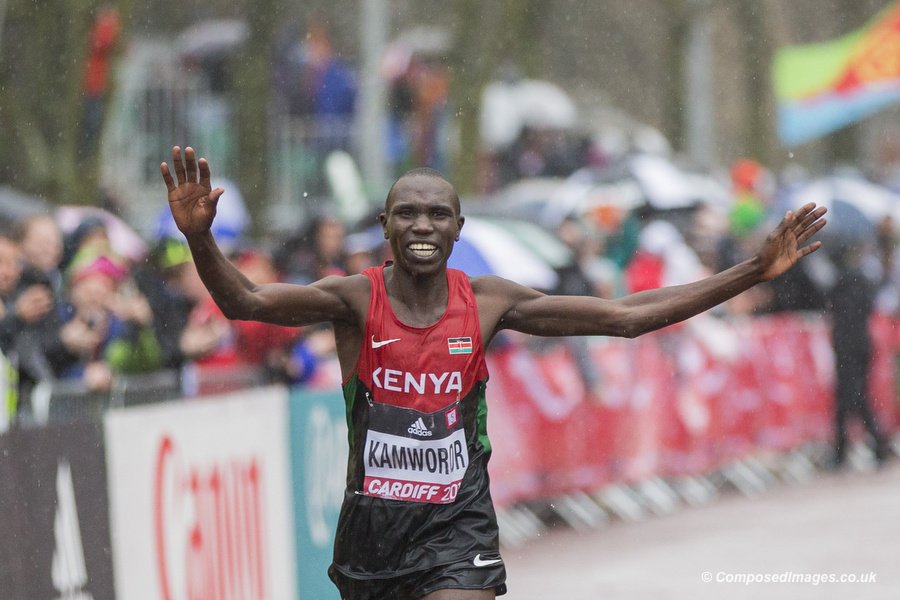 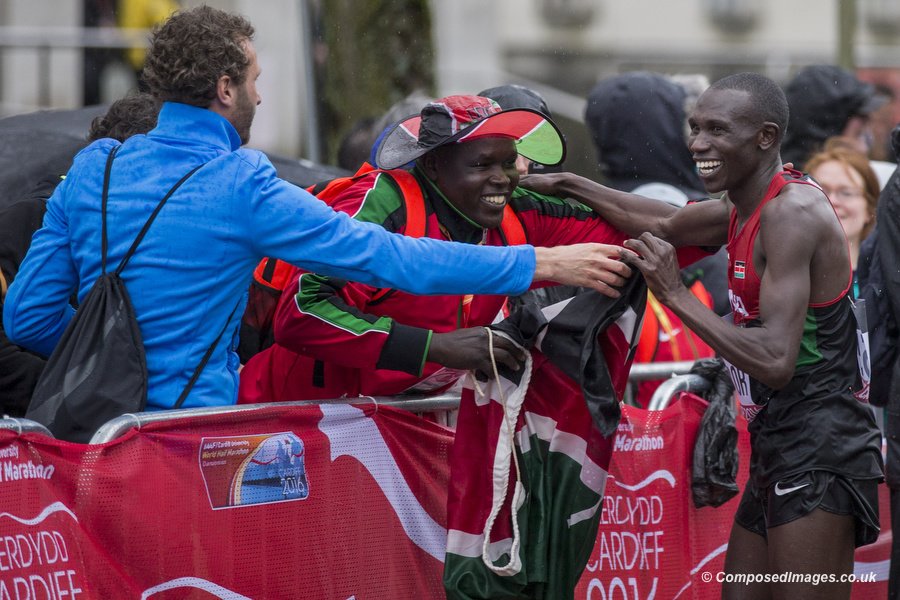 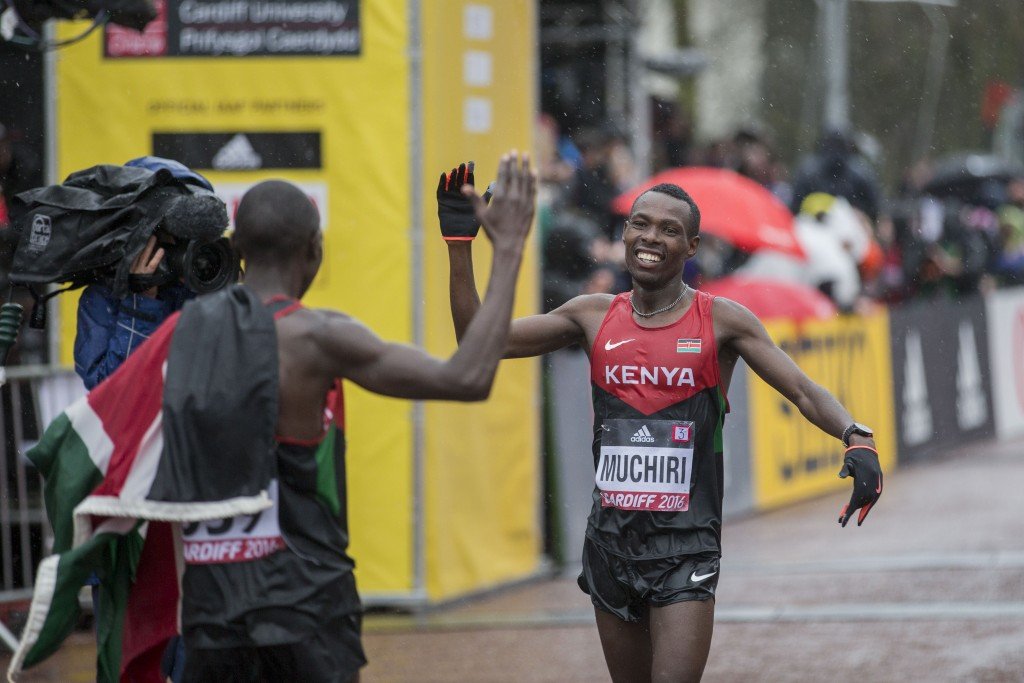 There was a brilliant battle for bronze, starring Great Britain’s London 2012 star man Mo Farah, and Eithopea runner Abayneh Ayele. The pair had appeared to be running closely together for much of the course. Much to the crowd’s delight, Mo Farah edged the race.

Mo Farah of Great Britain beats off the challenge of Abayneh Ayele of Eritrea to finish third in the IAAF / Cardiff University World Half Marathon Championships in Cardiff City Centre, March 26th 2016. 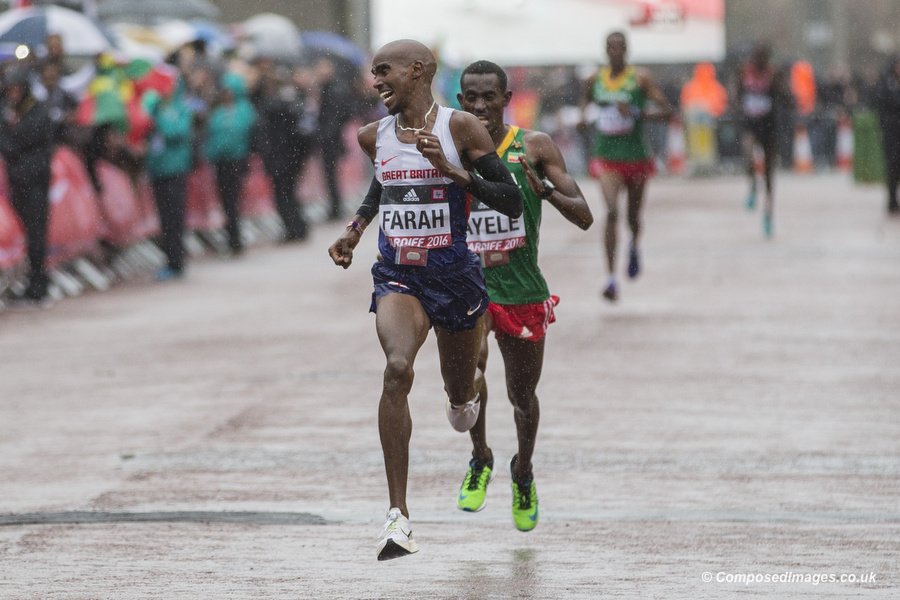 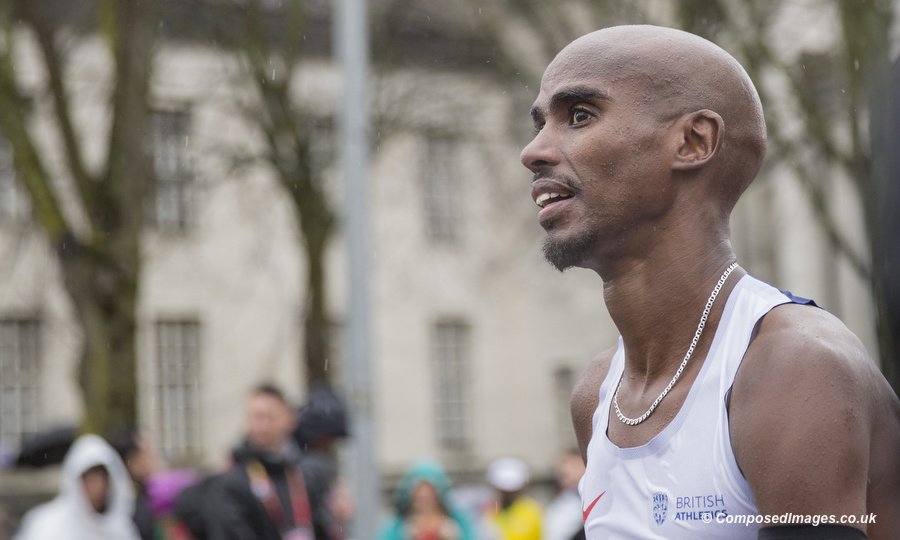 A mass race of around 13,000 runners followed the elites. Many of them would agree that it’s not the winning but the taking part that counts. And feelings of achievement come in all sorts of brilliant packages. Here was one the whole city could share in.

Everyone was talking about it the next day when I visited my local gym: the Kenyans, Mo Farah, people they knew who had run, their experiences and angle on events, even if they were spectators. One told me that he had a tear in his eye, such was the spirit amongst people on the street. “I could walk 5 minutes out of my front door and see Mo Farah in action! Amazing.”

The IAAF / Cardiff University World Half Marathon was a huge success, thanks to its various stakeholders and organisers including the IAAF and named sponsor Cardiff University.  Cardiff as a city and as a people achieved in buckets over the last few days, and it made me proud to live here. Gold medal to Cardiff.