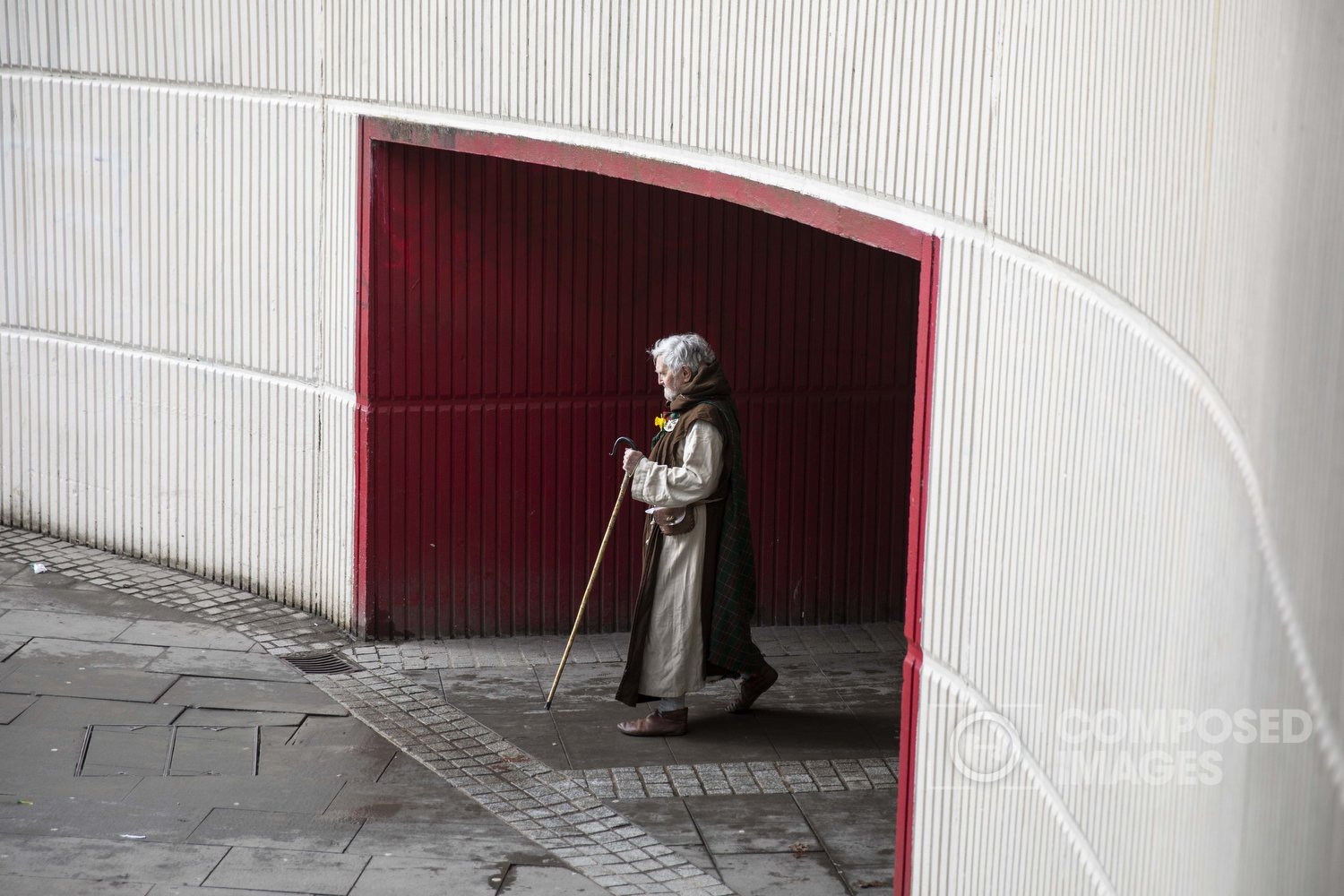 The annual Cardiff St David’s Day Parade took place last Friday. It’s a traditional Cardiff event which I have photographed a number of times. Although I remain disappointed about missing the 2018 event.

Last year it arrived in the midst of the second ‘Beast From The East’. This blast of arctic weather generated a major dumping of snow across Britain, including Cardiff. Official council messages claimed attendees could go at their own risk. And the St David’s Day hardcore including ‘Saint David’ himself went ahead with it. Snowy images could have been strikingly unusual and stood the test of time, but alas, I did not make it into town.

This year’s event came just after an unseasonably mild spell of glorious February weather which saw temperatures rise to twenty degrees in parts of Wales. Disappointingly, the blue skies vanished for March 1st, leaving a cloudy whitewash in its place. But the atmosphere outside City Hall was as convivial as ever, with children in traditional bonnets gleefully playing and others milling around with locals and tourists. 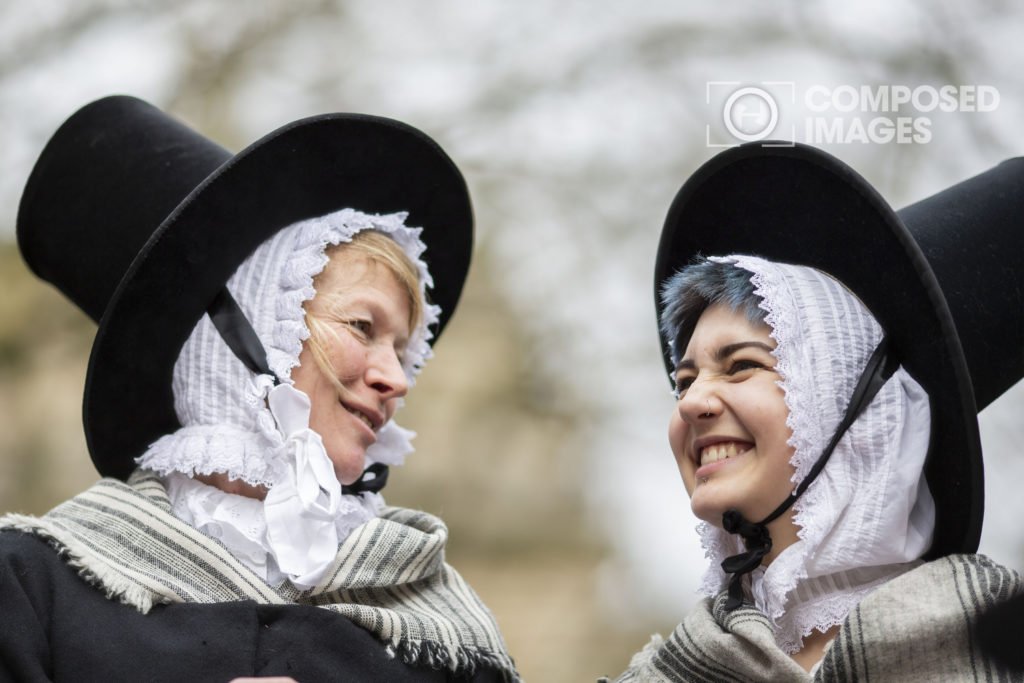 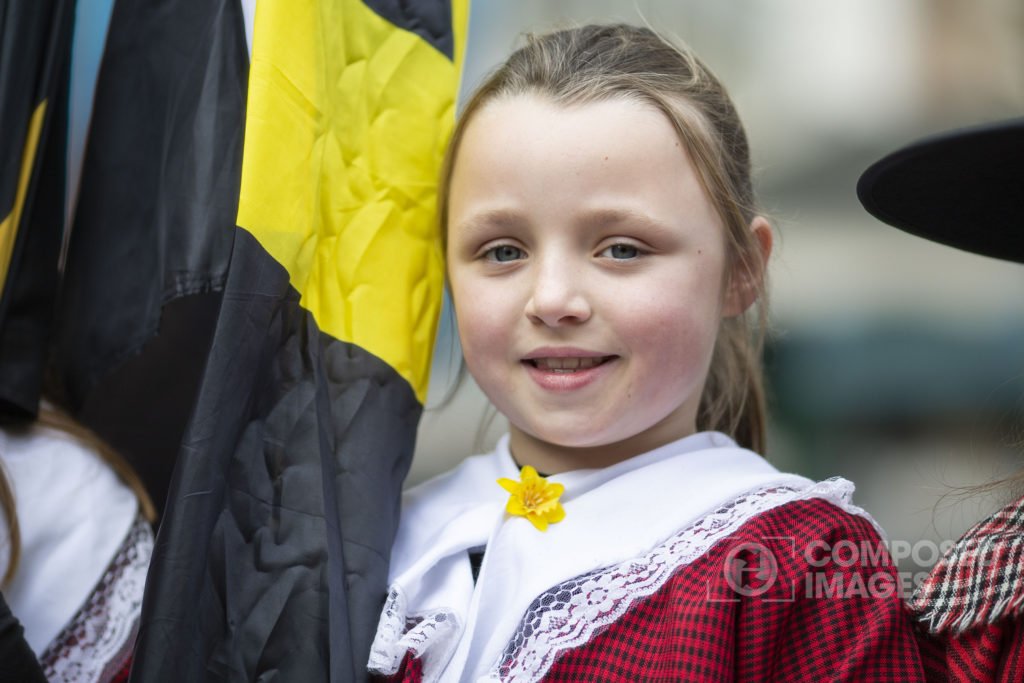 Certain things tend to scupper you during live events. These can include television camera crews working so closely on a subject that they leave you no angle for a shot. It can happen that a group of people or person walk in a different direction than you’d anticipated. It can happen that an old warplane in the sky just fails to appear for you.

On this occasion it worked. Exiting an underpass I scrambled halfway up the side of a bank, where I knew an unusual sort of perspective could be achieved. I’d previously used the angle to shoot some street characters and newly graduated university scholars. It was one of the only ways of getting a cleanish wide shot of St David without the clutter of other people or stuff in the background. 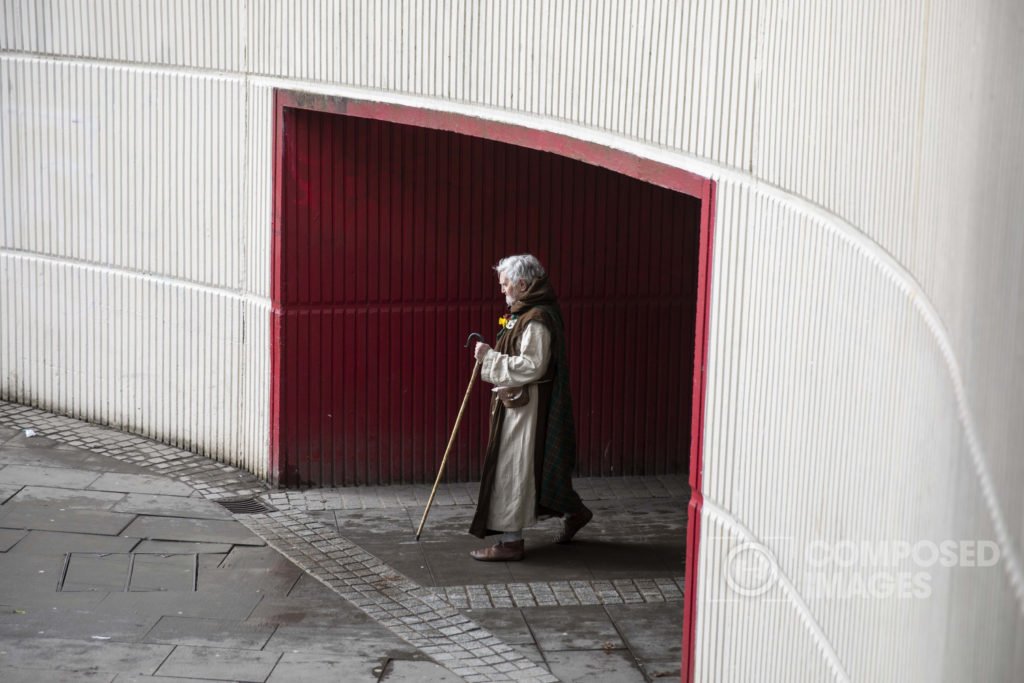 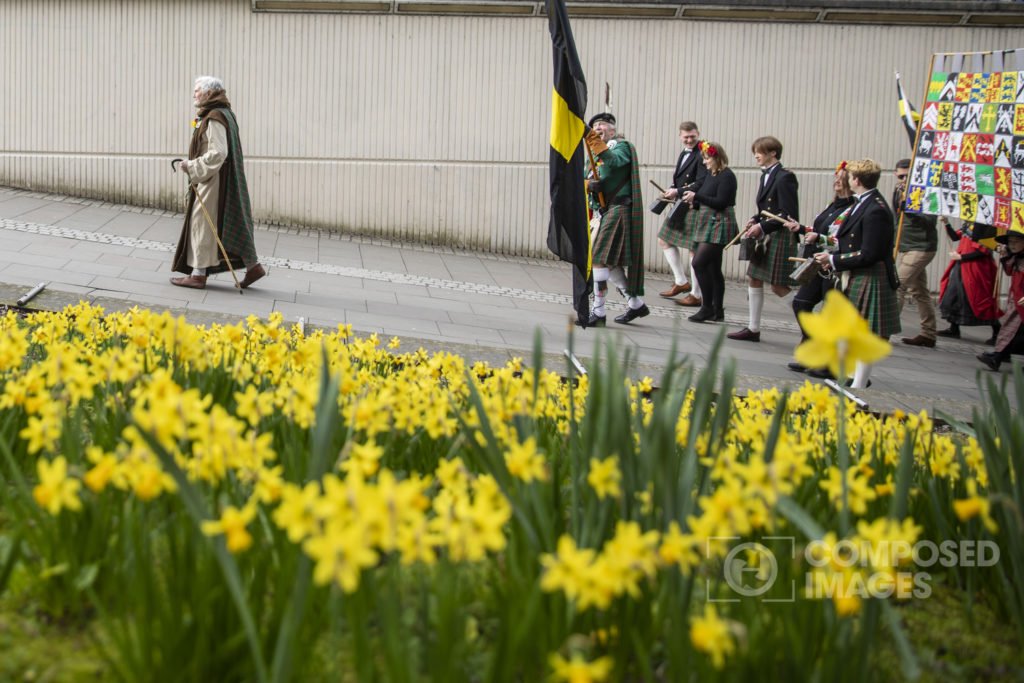 The parade then marched down Queen Street, a main shopping area of Cardiff. It passed below large images on a sports’ shop window showing major Welsh football and rugby stars. Such athletes are the kind of people commonly revered in Wales today. They are more often spoken of as legendary.  I wondered about the stores up ahead and if there were any names that would work well juxtaposed against St David. 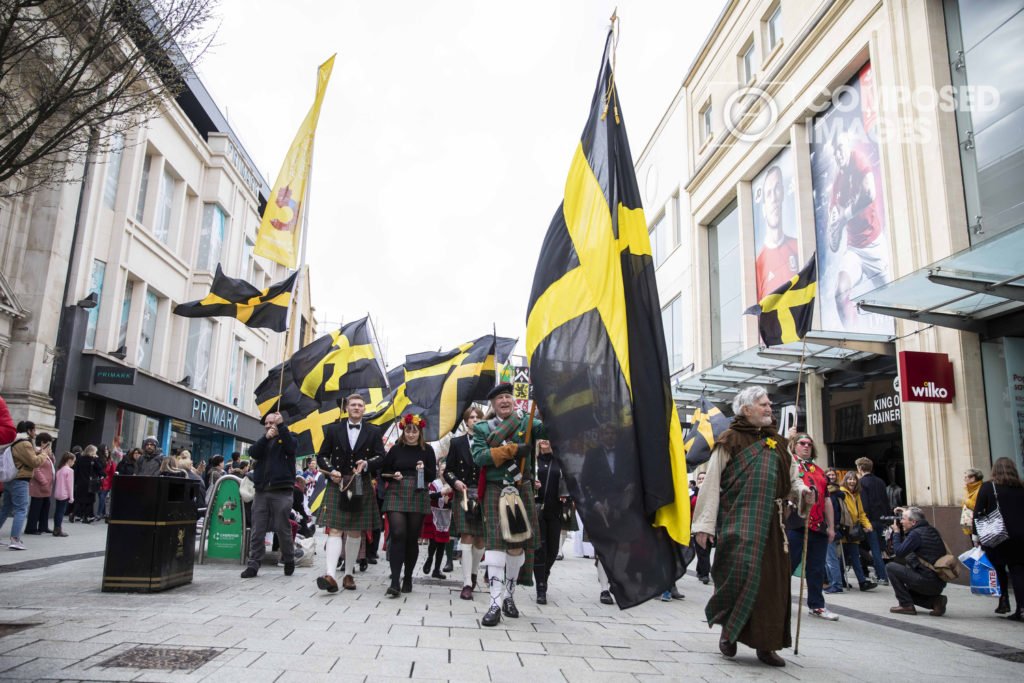 Top Man occurred to me a few short seconds before he passed beneath the shop sign, so I lightly jogged to bring myself alongside him. There was a pleasingly jaded looking gentleman towards the bottom of the frame with his own walking stick adding another layer of meaning to Top Man and St David. 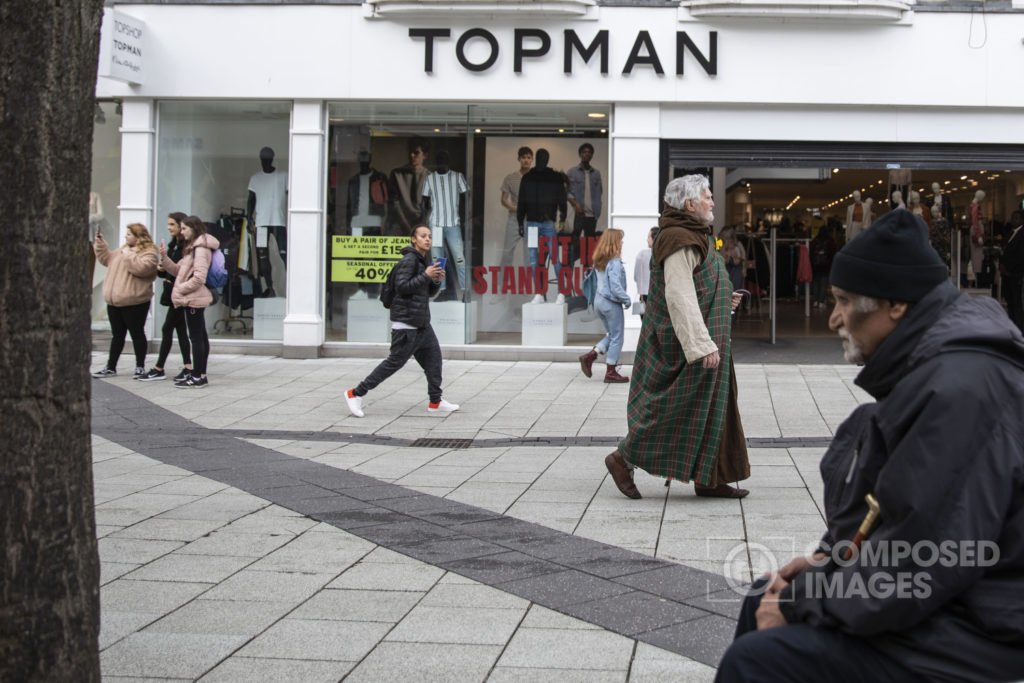 It’s always amusing observing the observers, which this year included a group of construction workers on Queen Street and a boy squashing his face against a door window. 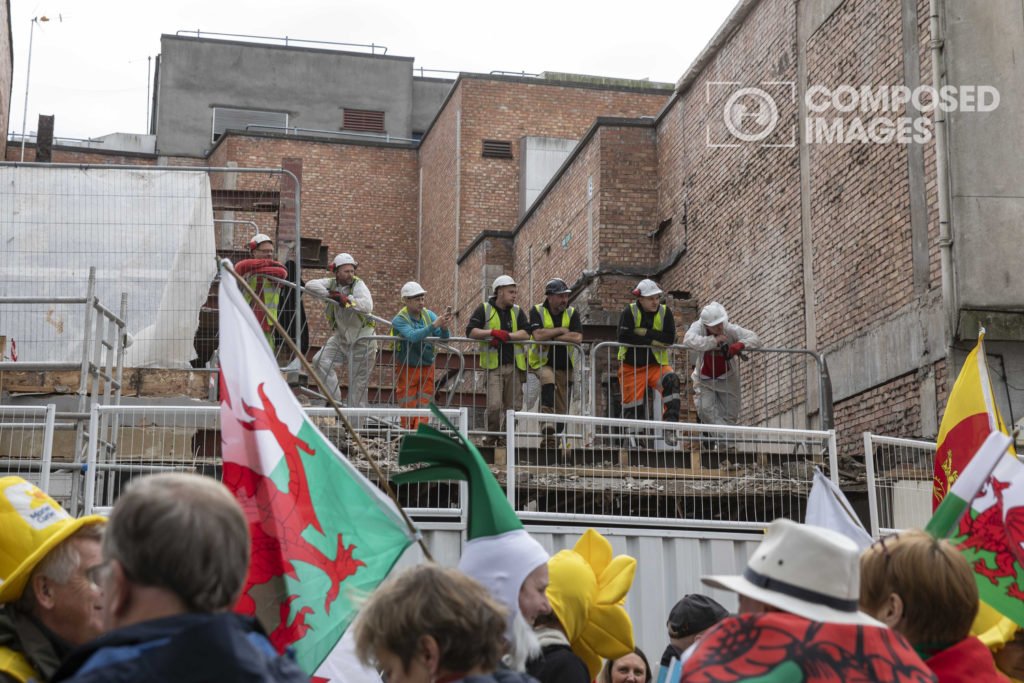 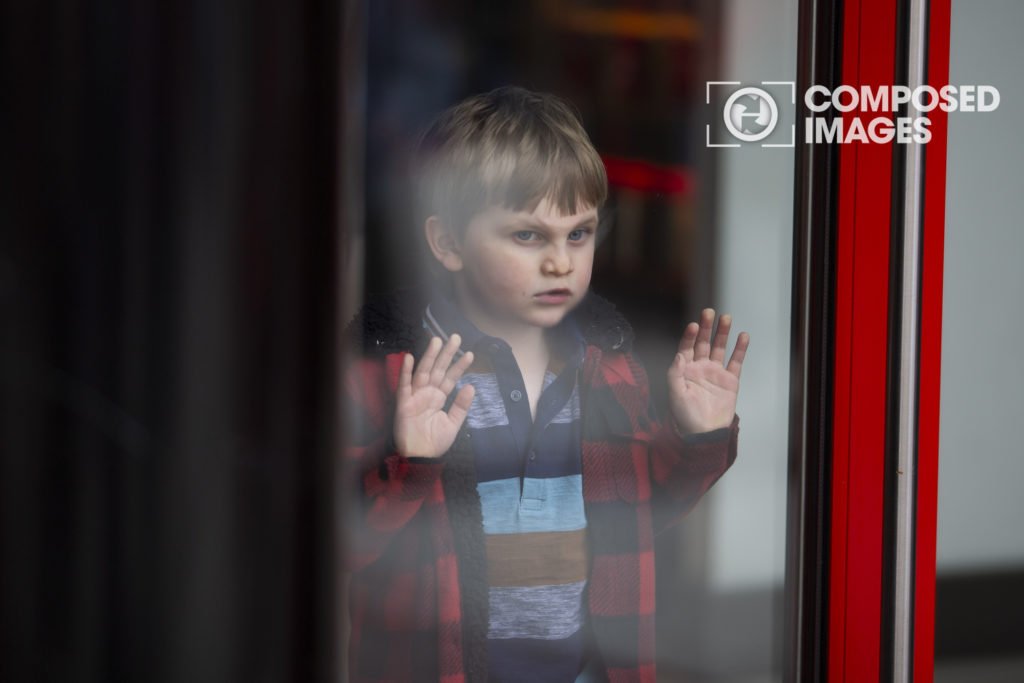 By 1pm the parade reached its final destination in The Hayes. Here the Welsh national anthem, Hen Wlad Fy Nhadau (Old Land of My Fathers) was given a hearty rendition by those in the parade and the assembled crowd. 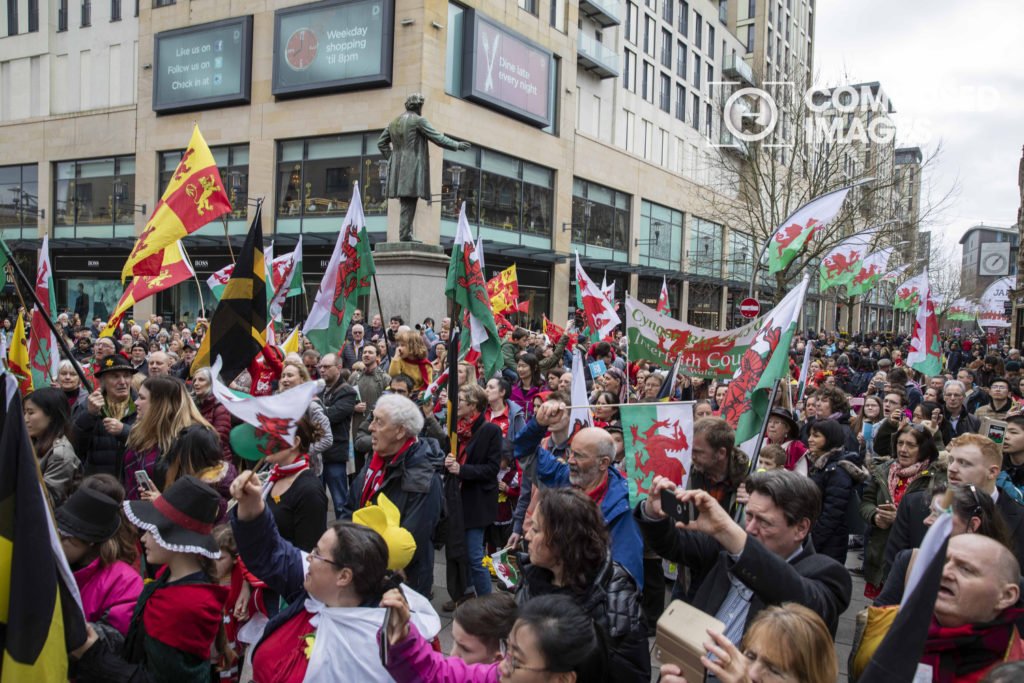