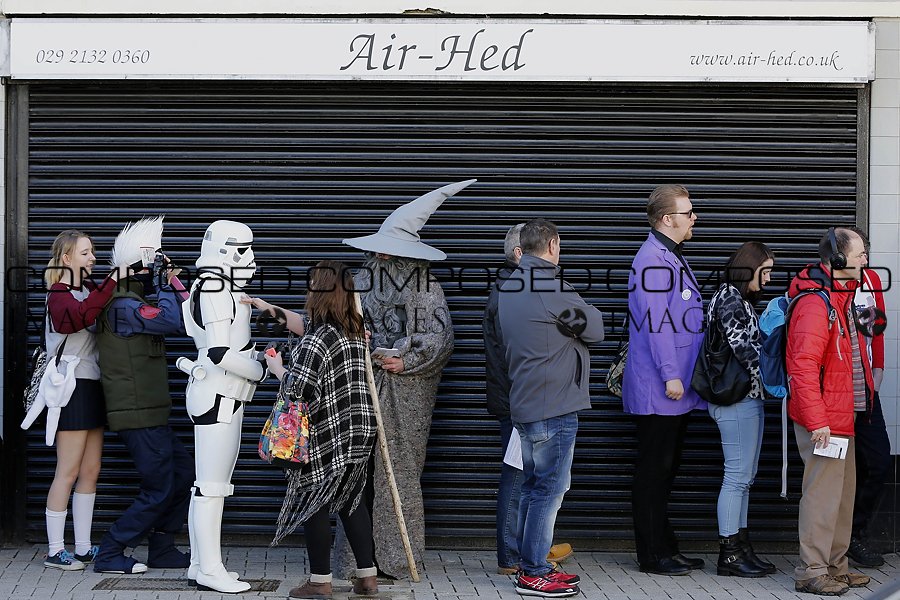 Last weekend Film and Comic Con was held at the Motorpoint Arena in Cardiff City Centre. It’s a festival for lovers of comics and films, fantasy and sci-fi. 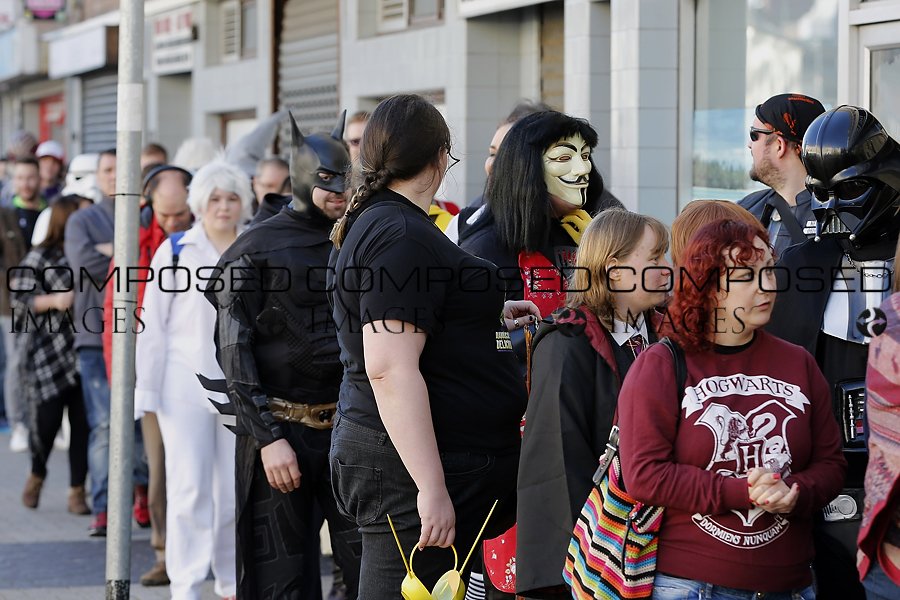 Ardent fans dress up in zany character costumes like their heroes. Actors attend inside the arena itself, meeting fans and having photographs taken. I imagine it’s a profitable enterprise for the organisers, a sound business branch of the film and comic industry full of merchandising opportunity.

The Motorpoint Arena is a five minute walk away for me, so after seeing a tweet or two the night before I decided to head over and grab a few shots of the quirky queuing masses for Cardiff Film and Comic Con on Saturday morning. Sure enough, the queues were building steadily, snaking around the blocks. I hung around for about 15 minutes before heading back. 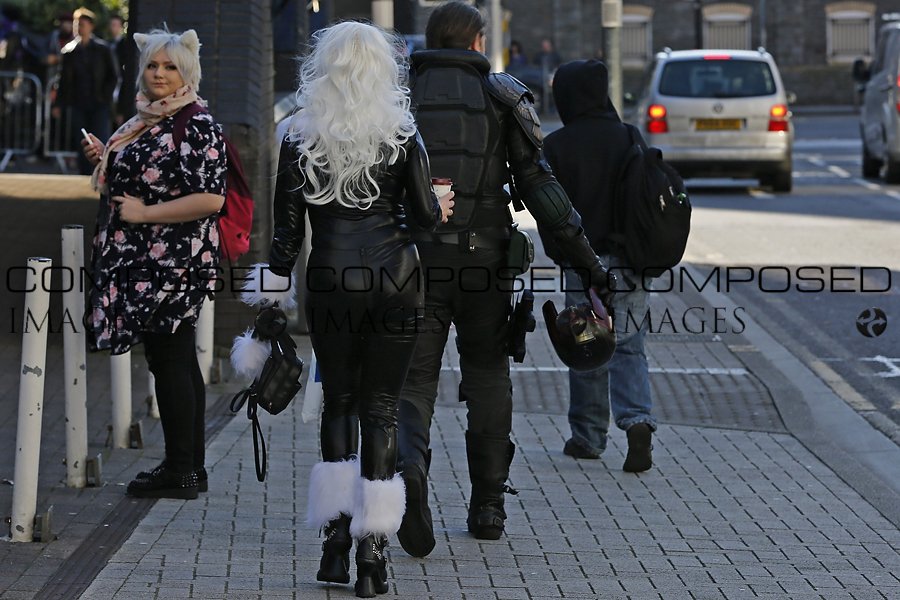 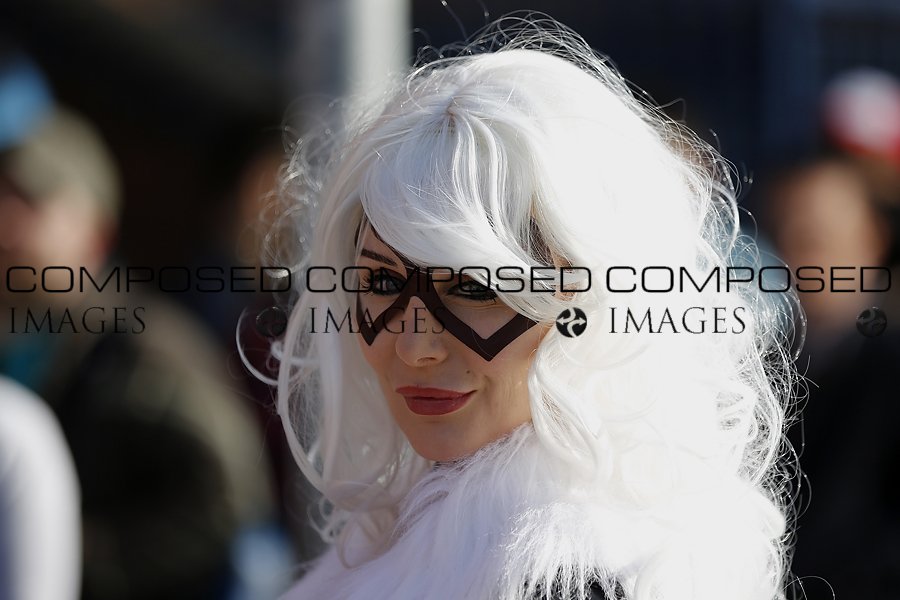 What surprised and perplexed me was the reaction to these people. In sharing a few images I myself had unthinkingly used the term ‘weird and wonderful’. But the term ‘weirdo’ appears to still be alive and kicking in its perjorative sense, as an insult. Scanning Twitter, many appeared bristling and dismissive of all the ‘weirdos’ in town. Someone also made a passing comment to me in person later that day about the “weirdos.”

On reflection, I was intrigued by the reaction, and mildly offended on behalf of the alleged weirdos. Ok it’s not as popular to dress up as your favourite fantasy characters like Gandalf from Lord of The Rings, and head to a city centre. Sure, there’s an element of ‘look at me’ exhibitionism about it which isn’t necessarily my cup of tea. And as humans we tend to balk at over-the-top, unnecessary difference.

But is it anything to get upset about? And how different is it from the thousands upon thousands who wear replica shirts of their football club, week in and week out? This is surely a very similar, if slightly alternative style of fandom, showing appreciation, and expressing personal identity. Should they be considered ‘weirdos’ or laughed along with, appreciated, even celebrated for their efforts and brazen ‘I-don’t-care-what-anyone-thinks’ courage?

We like to think ours is an accepting society, open to all different types of people – especially when we’re talking issues of race, religion, gender or sexuality. The response to people dressing up as their favourite fantasy characters, and even the continued use of ‘weirdo’ as an insult by young people demonstrates a tricky problem. 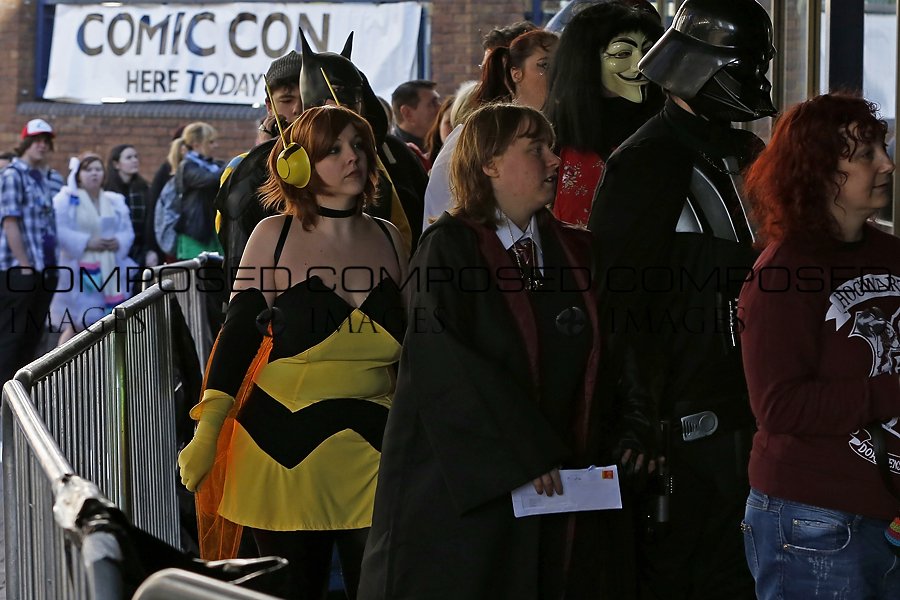 It’s possible I’ve taken throwaway comments a little too seriously here. Of course ‘weirdo’ is also a term used in jest. Thinking about it, I call my other half a weirdo all the time (because she is). We like to draw upon difference to poke light-hearted fun (which is what I was doing, honest).

But there was an undercurrent of something a little more acidic about the reaction to Comic Con kids and adults dressing up; and it seemed a bit unreasonable.