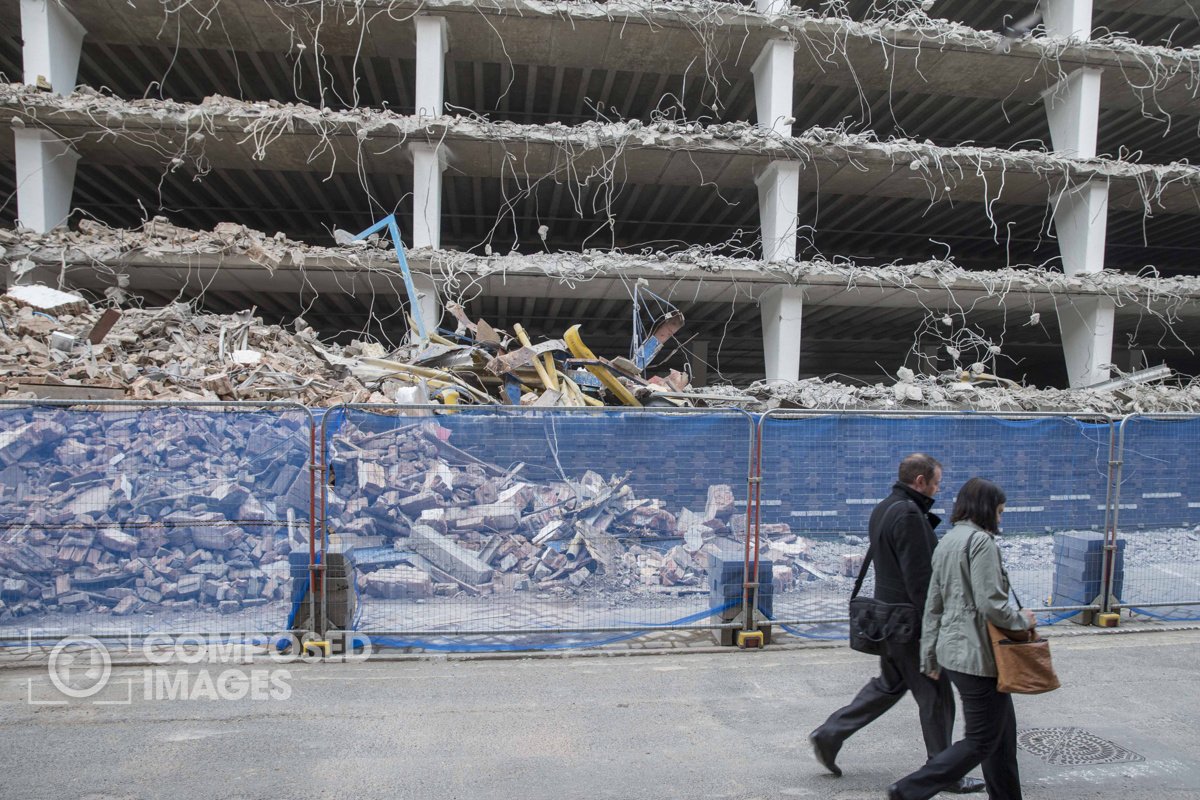 Watching a large building get reduced to rubble is weirdly compelling. If you’re passing by, you can’t help but look at it. You might even stop. In this nervous moment of global politics in April 2017 there’s also a sobering, almost chilling edge to the harsh jaggedness of a city centre building being ripped down. Even if it was only an ugly car park. 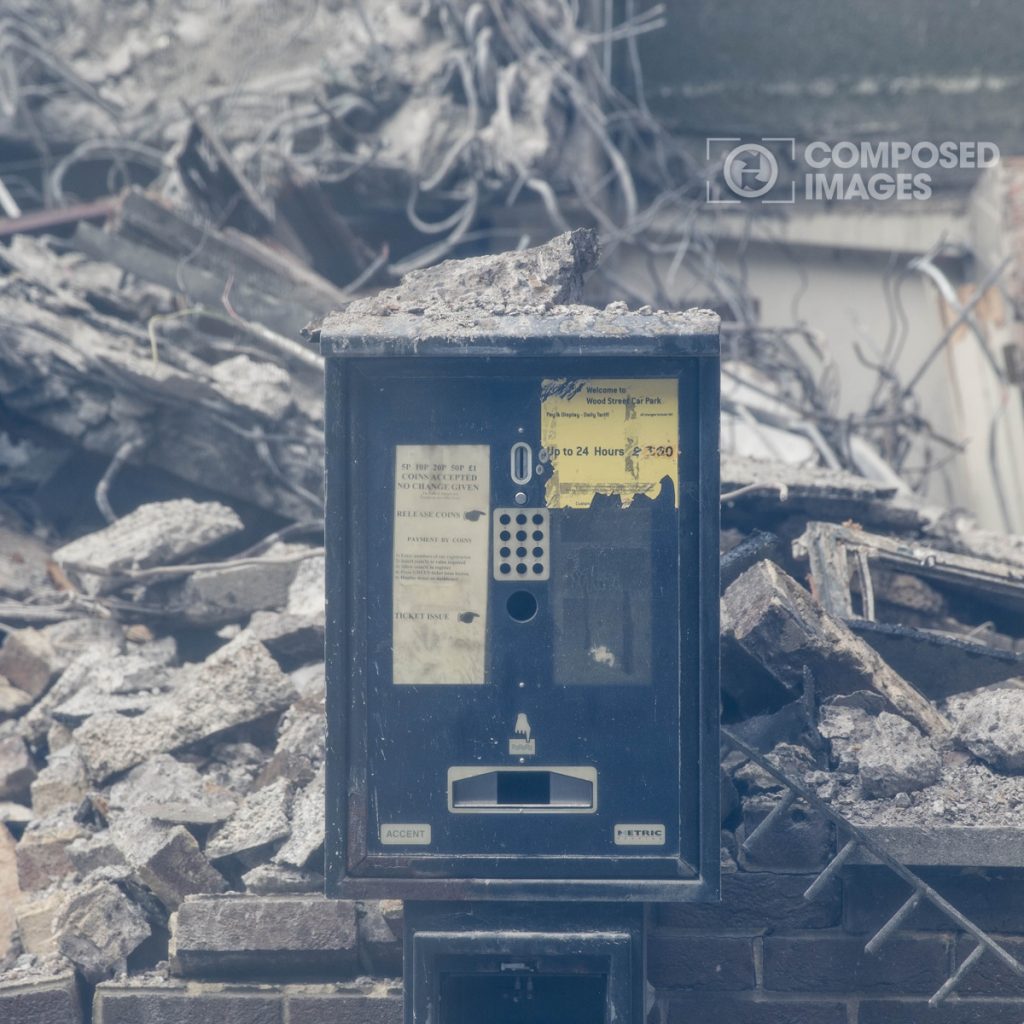 No change given. A ticket machine stands amongst the rubble.

News outlets often show us horrific pictures of war-torn cities. In recent times these have mostly been from Syria. We see ghost towns and shells of buildings, virtually incomprehensible levels of danger, human suffering and death. And right now we are regularly hearing war-mongering rhetoric from world leaders, verbal jousting between US President Trump and North Korea’s Kim Jong-Un. Most days we see new incendiary headlines and confrontational quotes.  These feel like unpredictable, sensitive, volatile times. But perhaps the present, the right now, always does.

Sure, we can probably get on with our lives without knowing anything about it all. Our day-to-day routines probably haven’t been affected. Maybe they won’t ever be. Who knows? That peripheral awareness of global events comes and goes in our consciousness. It fades in and out.

But when we see a large building being demolished, we tend to stop and look and have a think about stuff. 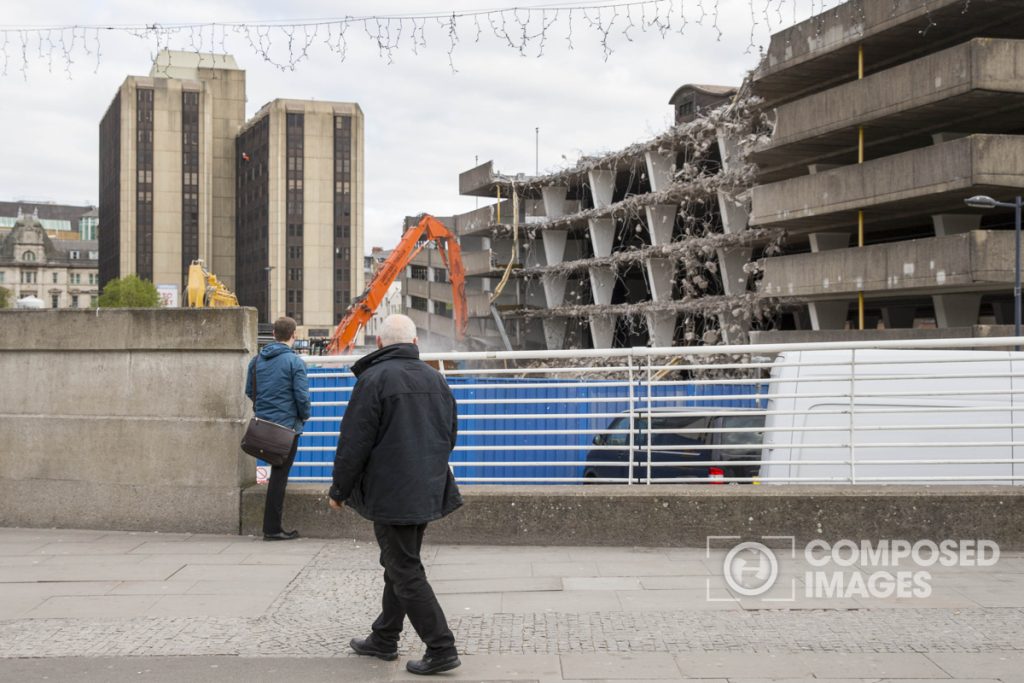 The urge to document an urban change kicks in and we point smartphones and cameras towards the dust and rubble, the bricks and wires. We can see up close what it looks like when buildings crumble. It’s unnatural, malevolent, gently threatening. At this point an awareness of all that global stuff might start leaking back in. Destruction feels a degree more real. Everywhere and everything can be destroyed, either in safely controlled conditions like this, or in nuclear conditions, not like this. 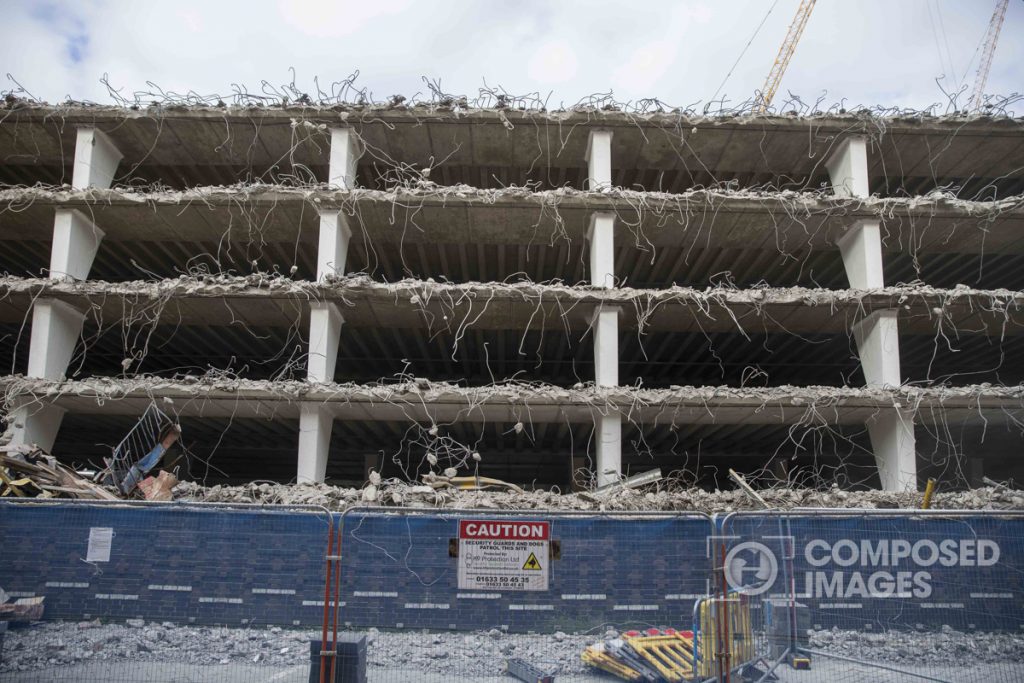 Wood Street car park has long overlooked Cardiff Central Station. Its modest four storeys of concrete sat there all ugly and blocky and grey and ignorable off a main thoroughfare.  Although it wasn’t entirely without charm, as I discovered while exploring it for my Cardiff car parks project a few years ago. 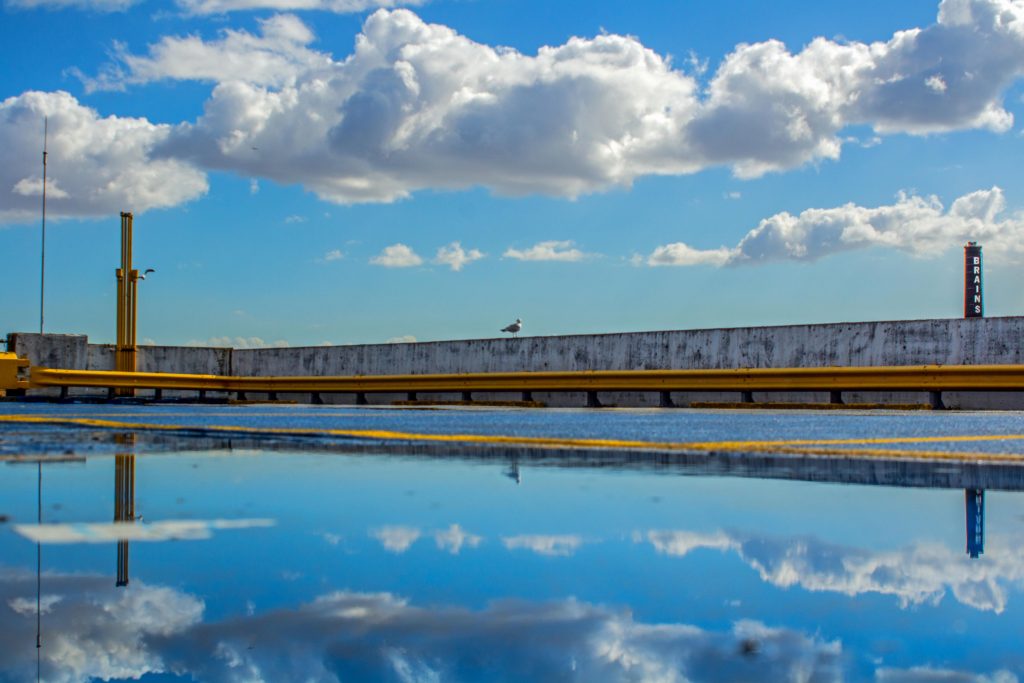 An image from the roof level of Wood Street car park, taken in 2013.

Now it is being demolished to make way for a newer shinier building, the kind which are already emerging next door. This is being done in the name of progress and prosperity. Cardiff as a city centre continues to undergo major surgery, office blocks sprouting up from construction sites in several locations. As residents we are constantly assured it’ll look nice when it’s done. 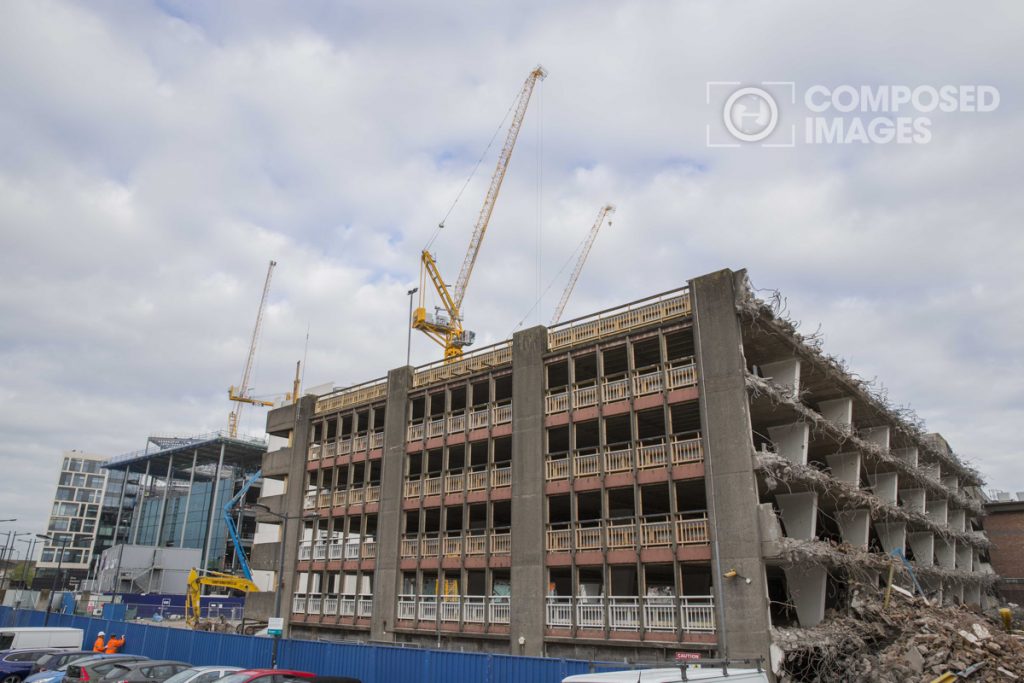 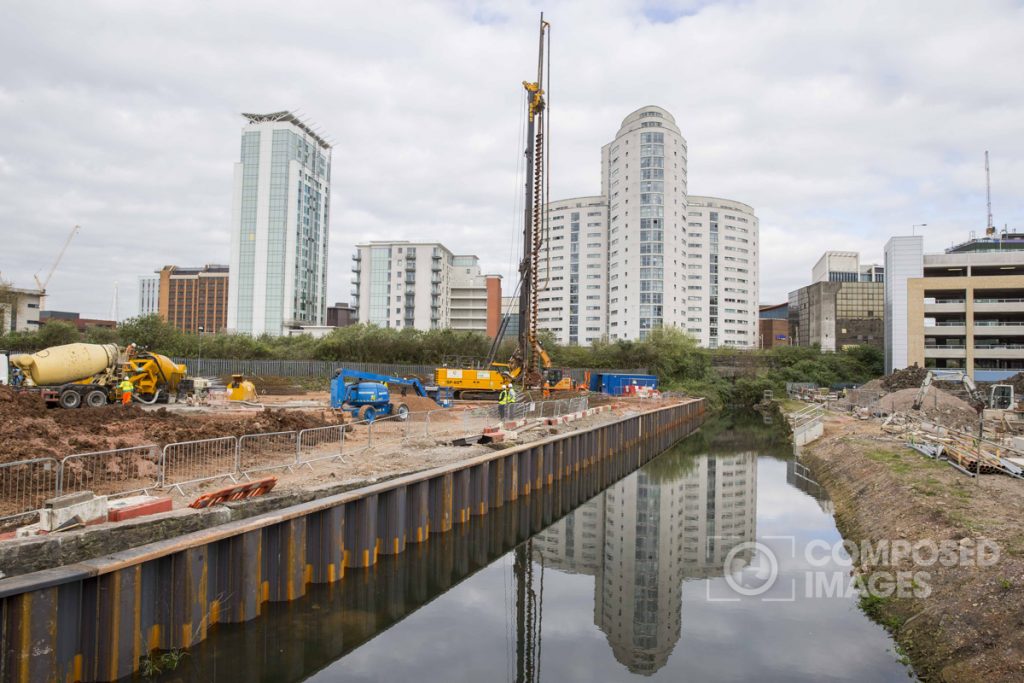 And yet if you peer hard into the mangled mesh of wire and dust, the current appearance of Wood Street car park evokes a dim awareness of elsewhere. Of war and nightmareish places you hope never to live. 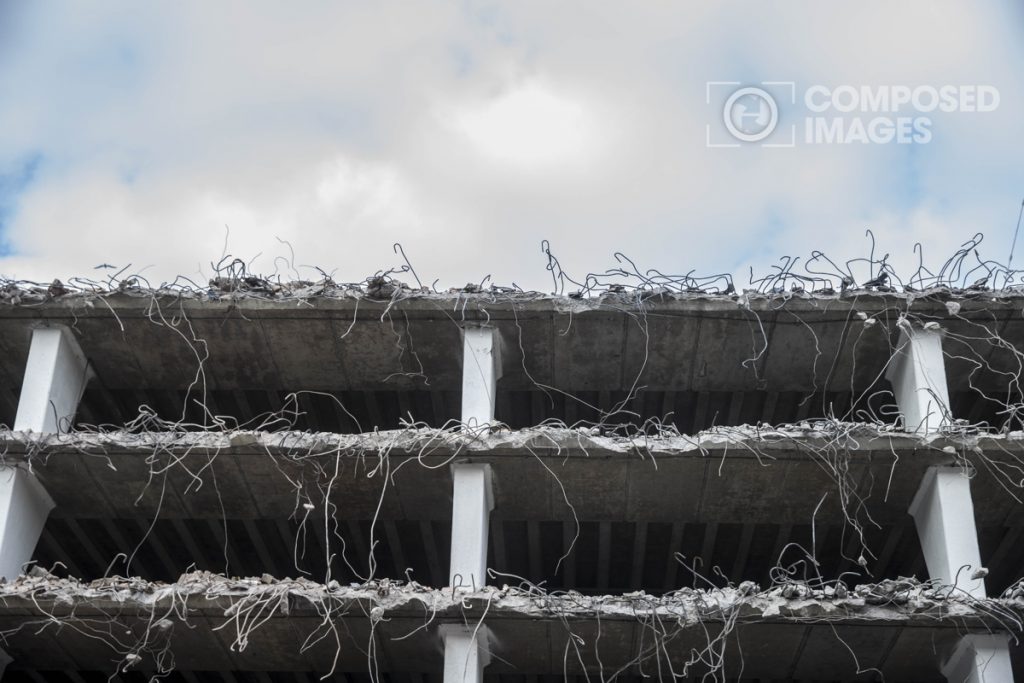 In isolation, out of Cardiff context, parts of this semi-structure looks like it might have been hit by a missile, a bomb. It looks like it wouldn’t be out of place in one of those reports about Syria, any city which has effectively been razed, the backdrop for a nervous reporter doing a live piece to camera.

Regarding it like this, almost as a piece of accidental urban art, your mind tumbles on. You wonder what must life be like in those places, for those people, with buildings like this everywhere, toxic airborne dust the least of their concerns.

While it might seem a million miles away, not so old pictures of Syria reflect a quaint old place on the continent where you might have holidayed at some time. It’s not so far away at all.

here are some photos I took while I was in Syria 7 years ago. pic.twitter.com/OzNFzLqstv

The Appeal Of Destruction

Demolition and destruction also has a deep human appeal intertwined with power.  We just love blowing stuff up.

This feels related to the same appeal of watching a Jenga tower clatter to the floor in multiple pieces, to watching multiple explosions in an action movie, to idly melting a biro with a classroom Bunsen Burner, to driving the wrong way around a race circuit in a computer game.

Out of urban areas, south Wales has an ongoing problem with hillside fires, large swathes of rural land apparently being scorched by bored kids.

Destruction, demolition and vandalism can be simplistically attributed to social malaise. It’s a way for the disenfranchised to express frustrations with a system.  “I dunno mate. It’s all bullshit. Rip it up and start again.” This is a lazy, basic but sadly understandable mentality in part responsible for Brexit and the election of Donald Trump. 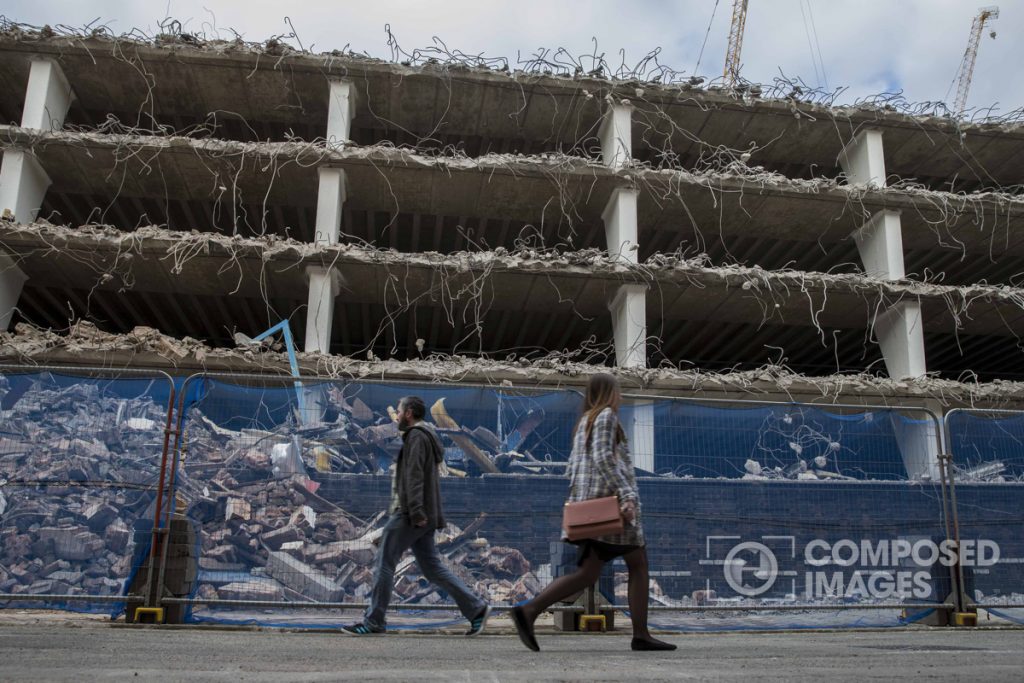 Destruction A Byproduct of Construction

Wait a second, you might say. Destruction and demolition is a fine and good and fun thing. It is a necessary means to an end, the only method of progressing. And it’s exciting because it represents rebirth, a big bang. You need to knock things down to build newer and better things, whether that’s a Cardiff car park or an oppressive Syrian regime gassing its own people.

Such power usually means a degree of wealth, land, ammunition, resources and capability. Much of this is desirable and connected with ideas of professional success and achievement. It can make you respected or feared or both.

Try not to though. Just look forward to the shiny new buildings out the front of Cardiff Central Station. They’re going to look fabulous.