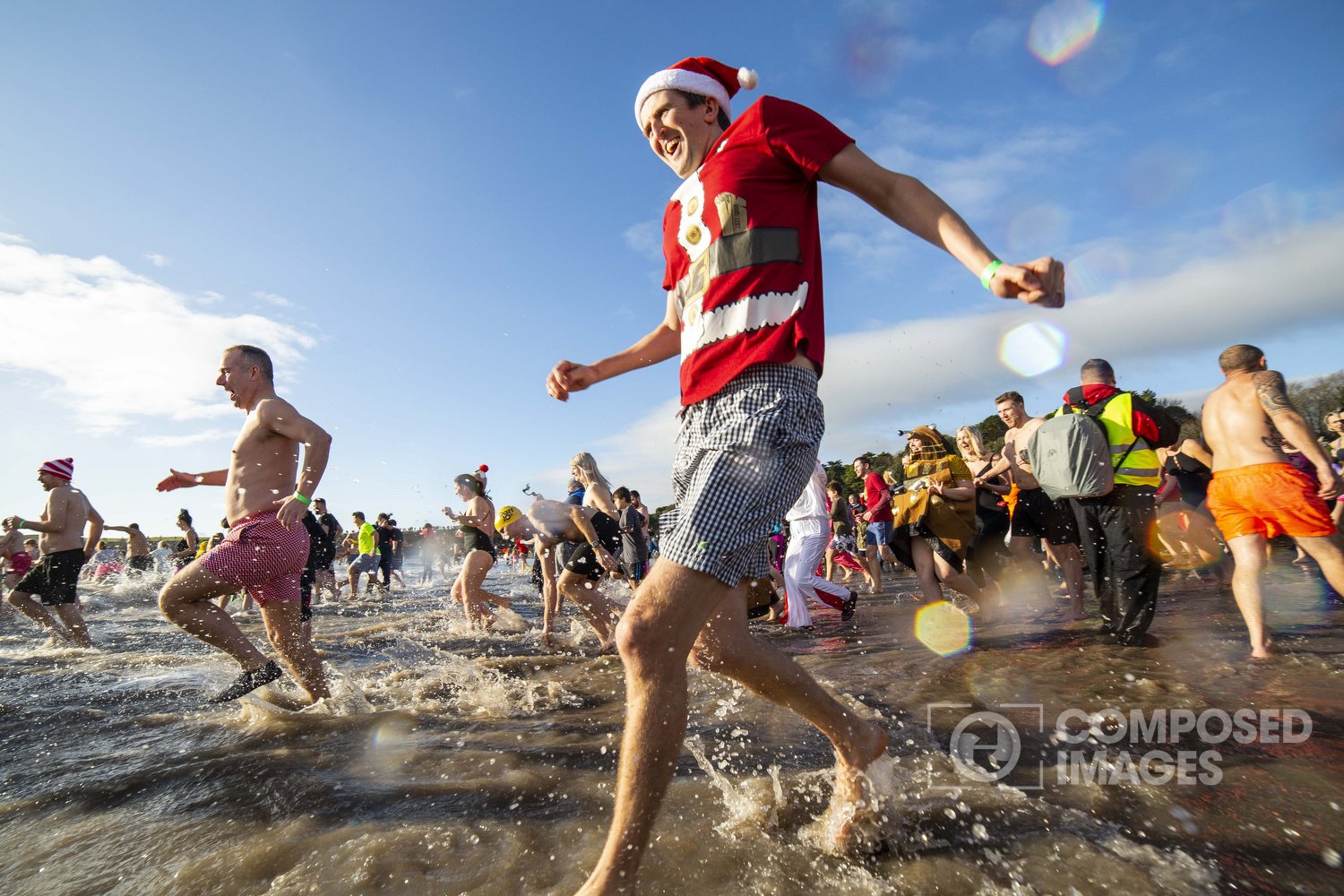 The annual Barry Island New Year’s Day Dip attracted more people this year thanks to an explosion of glorious weather.

Our new year of 2019 dawned with a rare and unexpected purity, unobscured sunshine rising from the horizon and embalming everything gold. It had been solid grey for what felt like a long time before, and fellow dog walkers in Barry appeared equally glad, happy and replenished by the appearance of this great distant ball of fire in the sky upon which many moods depend.

We first stopped around the coast from the main Barry Island epicentre, at the quieter cove of the Knap. Here we exercised the excitable dog and walked the sleeping and completely oblivious three-month old baby. Wearing the baby and trying to wrangle the dog, I quietly regretted not having the capacity for a camera too, the low, steadily rising light was so strikingly beautiful, the angles of the paths, walkers, the fishermen.
Countless tennis ball throws later, we returned to the car and headed around the coast.

I was comfortably on course to arrive just before 11am, when I believed the New Year’s Day Dip was due to begin. Passing the train station and climbing the hill it seemed that all the regular street car parking spaces were occupied. I had never seen it so busy. We were forced to park further away than I had envisaged, meaning I left my family in the car and hurried down to the beach.

But confusingly, it was a mass of runners that greeted me. There was no gathering of people on the beach, preparing to charge at the water. Upon Googling, I discovered my error. I was early by over an hour. Still, I reasoned, the light remained inviting and I had my kit, so I might as well take some photos.

The Barry Island Park Run is understandably a hugely popular event, especially when the weather is like this.

I ambled down towards the front, at one point almost obstructing a fellow photographer who was also here to shoot the dip, but doing the run first.

After ambling for a while, fairly bored, I made my way down to the beach and waited as the participants assembled beneath the Ty Hafan sign.

Local children’s hospice Ty Hafan supports the event, and I had taken my annual trip there a couple of weeks earlier when photographing the Christmas Eve visit of Father Christmas on behalf of Wales Air Ambulance. Both charities are held in high regard in these parts.

When finally the people charged, the colour and chaos was brilliant fun. One or two photographers had donned full-on waders and stood further back in the ocean with a long lens: probably the best approach.

I stayed in the shallows, aware of my other equipment on my back as well as the two cameras I was shooting with, and shot most using a wide angle lens, which ended up well smattered in sea water. Naturally there was a lot of rubbish and these are not the most technically beautiful shots, but a few are pleasing enough.

It was fun. Credit to all the bold, brave and witty participants, and to the organisers.