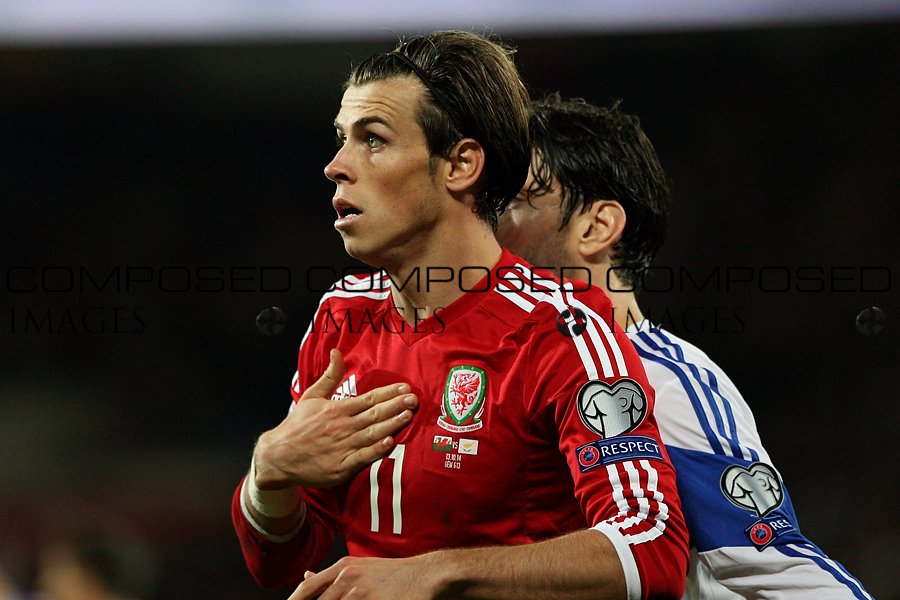 The Wales football team has reached a dizzying FIFA ranking of 22: the nation’s highest ever. Ahead of its crunch qualification match against Belgium in Cardiff on June 12th, many supporters are still giddy at the hope of qualifying for Euro 2016 – which would be the country’s first major tournament since 1958.

How much of this recent success is down to the Gareth Bale effect? As well as Bale, the team boasts other midfield stars like Arsenal’s Aaron Ramsey and Liverpool’s Joe Allen, and some unsung heroes. But it’s the Real Madrid player Gareth Bale who grabs most of the attention, and rightly so.

With the bit between his teeth and a free role, unshackled by concerns of Ronaldo, there’s a natural urgency about Bale when he plays for Wales. It can still appear raw at times, instinctive and almost underdeveloped, like he’s the best kid in the school, running on plain hyperactive energy. Everyone knows he’s the best, including him, and nobody loves it more. 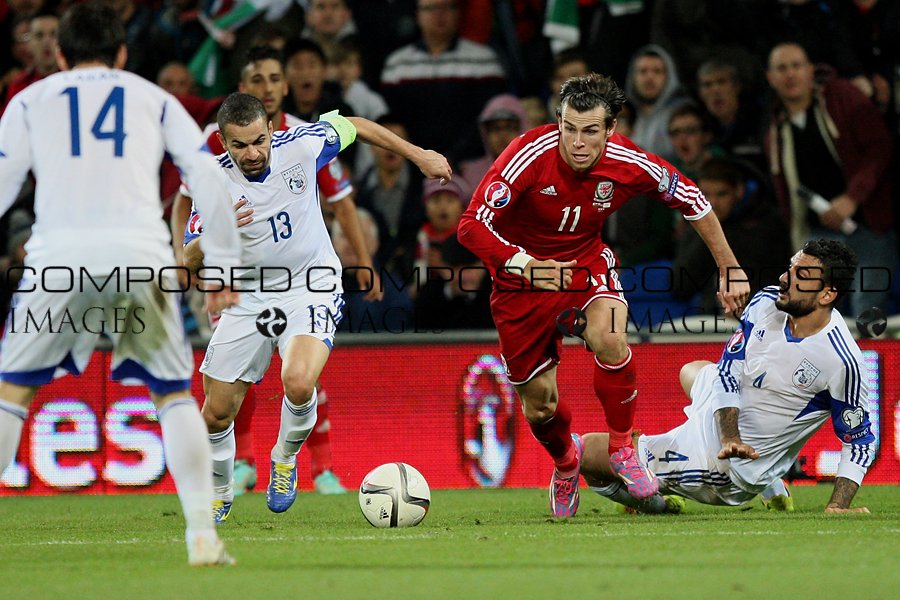 Gareth Bale runs at the Cyprus defence during the Euro 2016 qualification match between Wales and Cyprus.

Late in the qualifier at home to Cyprus back in October, trying to run the clock down, a tireless Bale was running defenders down channels, drawing tackles, shielding the ball by the corner flag, taunting his opponents with ability. At one point he literally goaded an opposition defender, right up in his face. The moment perhaps didn’t reflect him in his most sporting, gentlemanly light – and probably played some part in a heavy challenge he took a couple of minutes later, but it underlined the fact that he’s as pumped-up as possible when playing for his country.

As a Tottenham supporter, like many I fell in love with Bale because he grew to be so reminiscent of that first idol, Paul Gascoigne. Alongside the now spookily ubiquitous Gary Lineker for England in the 1990 World Cup, then sporadically afterwards for Tottenham, Gascoigne ignited my love of the game.

Gascoigne and Bale would both take the ball and fearlessly cruise through tackles, finding a passage through impossibly confined spaces – although perhaps Gascoigne with more hypnotically skilful close control than Bale’s irrepressible pace and power. An arguable over-dependence on pace and timing at one time earned the Cardiff man a glut of yellow cards and a small reputation for diving, but he argued this was because he was attempting to avoid tackles. It’s something he appears to have now curbed.

There was Gascoigne and perhaps also a subtle hint of late 1990s’ David Ginola style, the way he’d come inside from either flank and confuse defenders with a simple, predictable, yet impossible-to-stop body swerve before curling a shot into the far corner.

After progressing through the youth ranks at Southampton and winning a 2007 transfer to Tottenham, Bale only really emerged for Tottenham in the 2009/10 season from the left back position, having taken a chance to play when Cameroon’s Benoit Assou-Ekottu went away on African Nations Cup duty. Someone close to Bale told me that manager Harry Redknapp just hadn’t much fancied him beforehand. That person also informed me Bale grew up an Arsenal fan, much to my dismay. 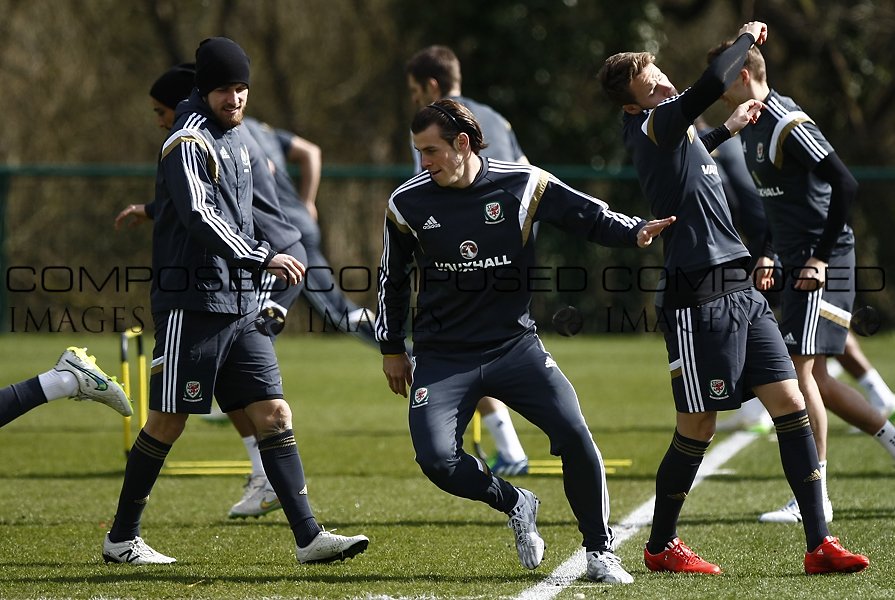 With greater game-time and growing confidence, Bale was deployed more as an attacking force, playing a starring role in a remarkable string of Premier League games late in the season, including wins against Chelsea and Arsenal, and culminating in a first Champions League qualification with victory at Manchester City. The subsequent Champions League campaign would bring him to the attention of the world, thanks to one hat-trick performance in the San Siro against Inter Milan, where he single-handedly hauled Tottenham back to respectability. 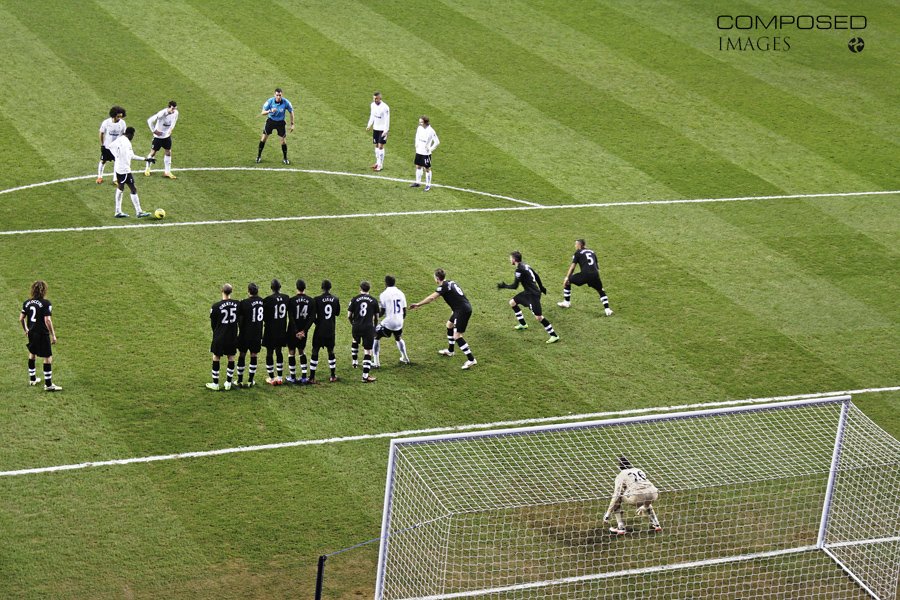 Emmanuel Adebayor questionably tees up Benoit Assou-Ekottu to shoot over the goal for Tottenham, while Bale, Kyle Walker, and Modric look on. Taken from the stands in February 2012 during the 5-0 win over Newcastle United.

Bale formed an irresistible midfield nexus with Croatian star Luka Modric, with whom he’d effortlessly interchange and overlap, later supported by career prime midfield warrior Scott Parker, who would have hurled himself in front of a Boeing 747 if it was travelling towards the Spurs goal.

In his final season as a Spurs player, the ball-retention and distribution master Modric finally freed to Madrid (better there than Chelsea), there was somehow an even greater, almost freakish consistency with which Bale slammed home match-winning goals from 25 or 30 yards. As he appeared to carry an otherwise fairly ordinary team on his own, it became clearer than ever that he couldn’t stay at White Hart Lane. Financially prudent Tottenham couldn’t afford to keep him.

You wonder how his game will evolve as he ages, loses a little of that ruthless velocity, is less able to play with the abandon he currently enjoys. It’s possible he’ll follow a Beckham path, drifting back to the wings, or a string-pulling quarterback position, leaning more on the efficiency of that wickedly whipping left foot. 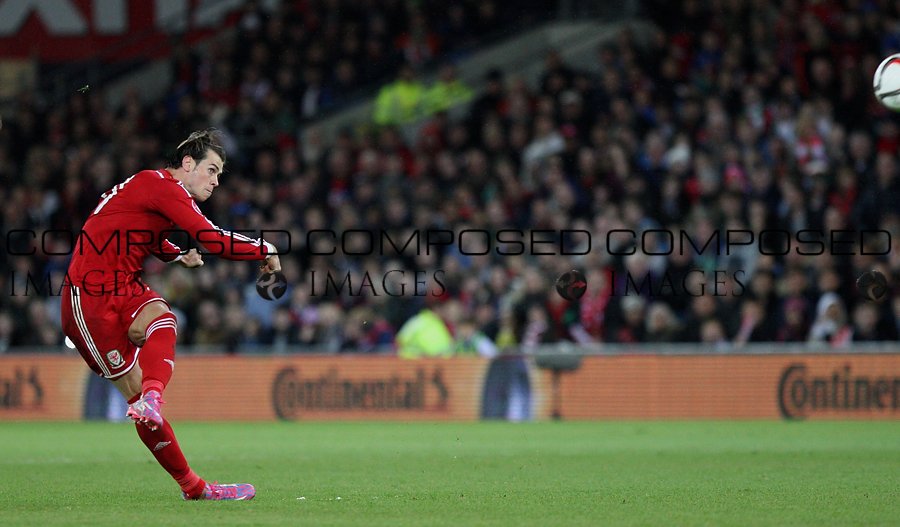 Gareth Bale strikes a free kick during the Euro 2016 qualification match between Wales and Cyprus.

This season hasn’t been plain sailing for Bale, the many successes and major goals of last year’s debut season apparently wiped from memory, goals drying up, his relationship souring with Real Madrid colleagues, fans and the local press, his performances dipping, fitness a concern, his agent vocal and snappy against both his employers and the press. You could understand recently fired Real Madrid manager Carlo Ancelloti when he accused Bale’s agent for talking too much. The claim from Jonathan Barnett that other Madrid players don’t pass to him enough, whether true or not, rang embarrassingly of the playground.

Whereas last season, when the pressure was on in the big games for Bale to deliver, and he delivered in style, this season it’s all been much harder. Perhaps losing the midfield balm of Modric for much of the business end of the season was more damaging than anticipated.

Bale said he didn’t need to prove anything to his critics, following his starring two goal performance for Wales in Israel back in March. But you could understand the question. He played with that same ‘gimme-the-ball, I’ll-run-at-em’ lustre which may be lacking when he plays within the confines of the Bernabeu. Despite the record-breaking transfer fee, in Madrid the Welshman remains an apprentice, a terrier-like upstart to Ronaldo’s grand master. And he probably always will do for as long as they remain on the same team. (Who wouldn’t be salivating at the prospect of a Euro 2016 clash between Portugal and Wales?)

Not making mistakes in a game isn’t good enough in Madrid, even if he is recovering from injury. Bale was roundly lambasted by the media for a quiet comeback performance in the Champions League semi-final first leg against Juventus. His price-tag means that more is expected of him. You also sense that he’s not fully integrated into the squad, relations may be difficult with team-mates, it could be that his language skills haven’t developed as quickly as hoped.

Bale always seems to brush it off and claim he’s happy to stick at it in Madrid.

Nonetheless, there may be a lingering truth in the regular rumours about his summer return to the Premier League with Manchester United. The mill will continue to grind over the next few months. 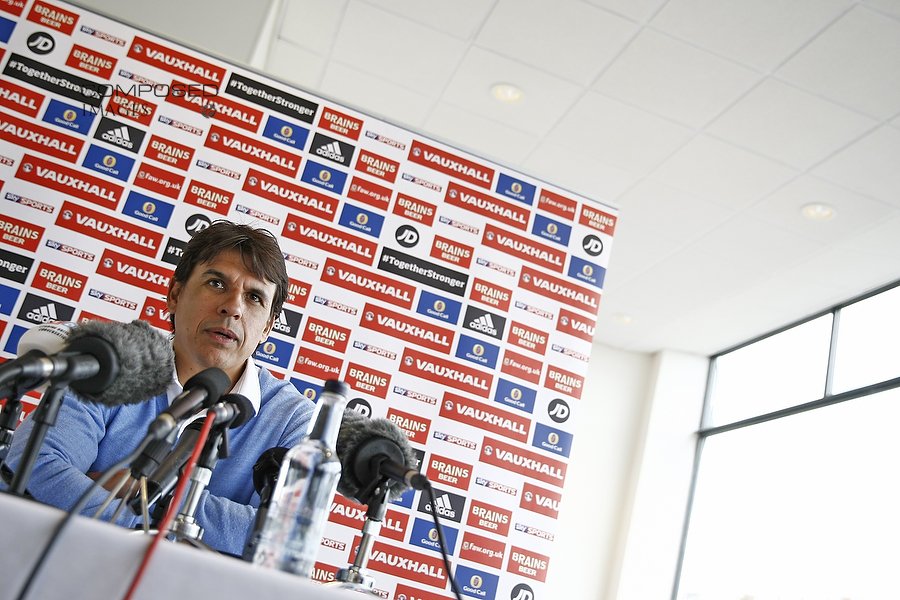 At a press conference announcing the Wales squad to face Belgium, manager Chris Coleman wasn’t giving away any insight about Bale’s wishes, claiming he didn’t know what he wanted, almost suggesting Bale is a closed book on that front. But Coleman did tell BBC Wales correspondent Rob Phillips that he wanted him to stay put.

Wales boss Chris Coleman tells me he does not think Gareth Bale will move from Real Madrid. Also WANTS him to stay there. — Rob Phillips (@robphillipshere) May 26, 2015

If everything seems a little vague, mysterious and unknowable for Bale in Madrid, with Wales it’s an entirely different story. When he comes back to Cardiff, Bale usually appears to relax with his long-term football mates; other guys he grew up playing with across a relatively small patch of south Wales, knowing and relishing that he’s the main man. It might feel for Bale like returning to a club from international duty, rather than the other way around.

The Belgium match on Friday will see Bale win his 50th cap for Wales, an impressive tally for a 25 year-old. That number of appearances bears testament to a proud commitment to the Welsh cause that began back in May 2006, aged 16, when he was brought on against Trinidad & Tobago and assisted the winning goal. If fit, it seems he will always return for a Wales match, however meaningful the contest, or however full the ground is likely to be. 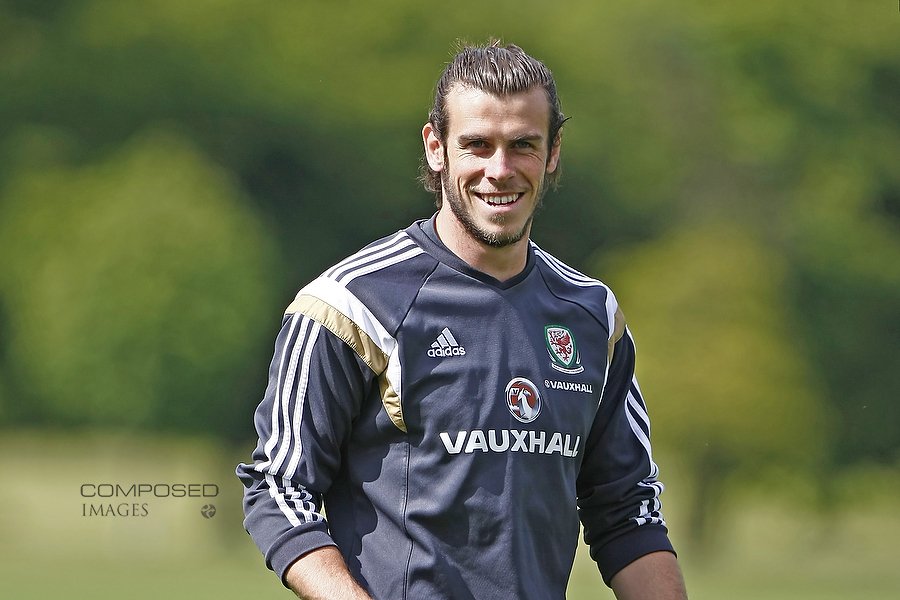 Gareth Bale during training, as his Wales team prepare for the UEFA Euro 2016 qualification match against Belgium. 08/06/2015. 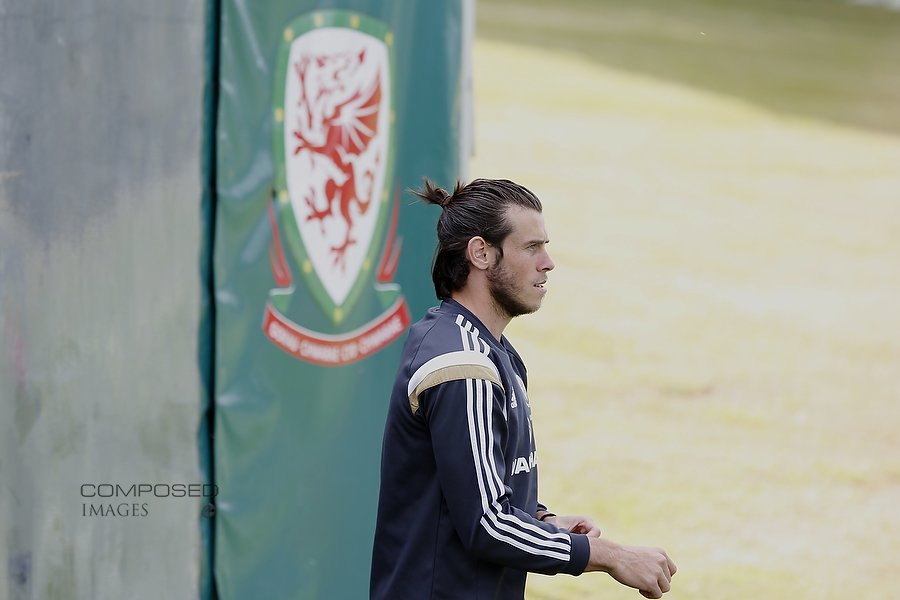 Gareth Bale walks onto the training field, as his Wales team prepare for the UEFA Euro 2016 qualification match against Belgium. 08/06/2015.

Currently hitting new FIFA heights, Wales may well raise a glass in toast to the man who has propelled them up there. Against second-ranked Belgium comes the serious job of taking another step towards finishing what they started and qualifying for Euro 2016, a first major tournament in several generations.

In light of the current saga with world football’s governing body, that would mean much more than any FIFA ranking, certainly to Bale.

It had to be, didn’t it?  A few images taken for the official Wales team photographer Propaganda Photo on an incredible night at Cardiff City Stadium. 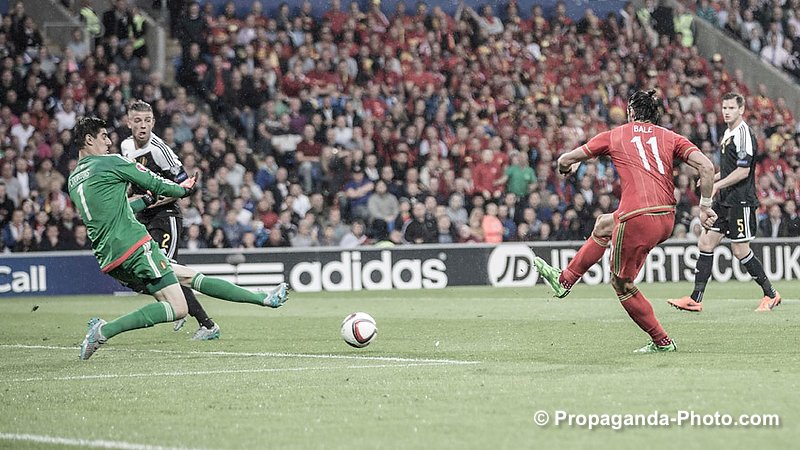 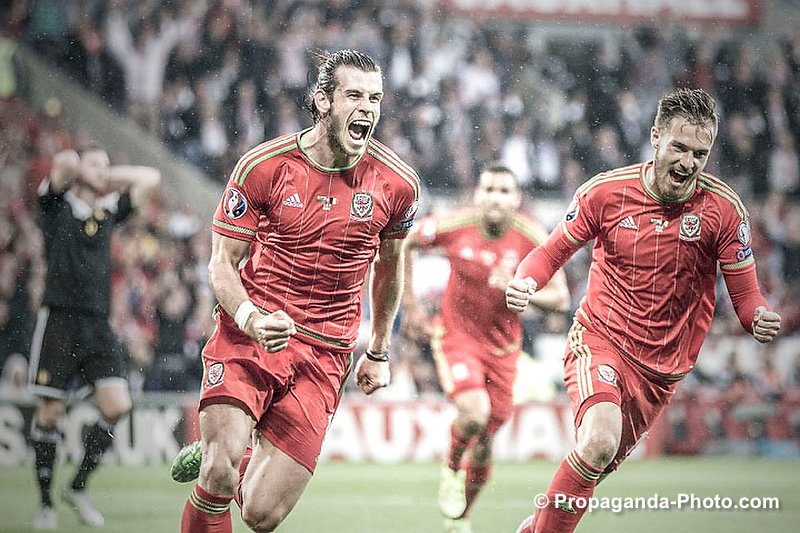 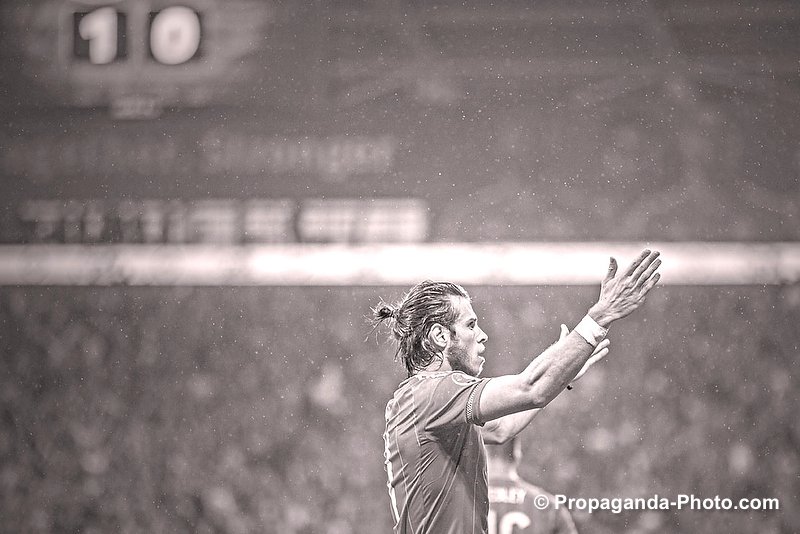 […] That night I was shooting for Propaganda Photo. (See the previous post on this blog for more Bale). […]

[…] June saw a lot of sport. From bicycles and extreme sailing, to an extremely memorable Wales football performance, as they beat Belgium 1-0 in Cardiff, smoothing their path towards Euro 2016 qualification thanks in no small part to one Gareth Bale. […]