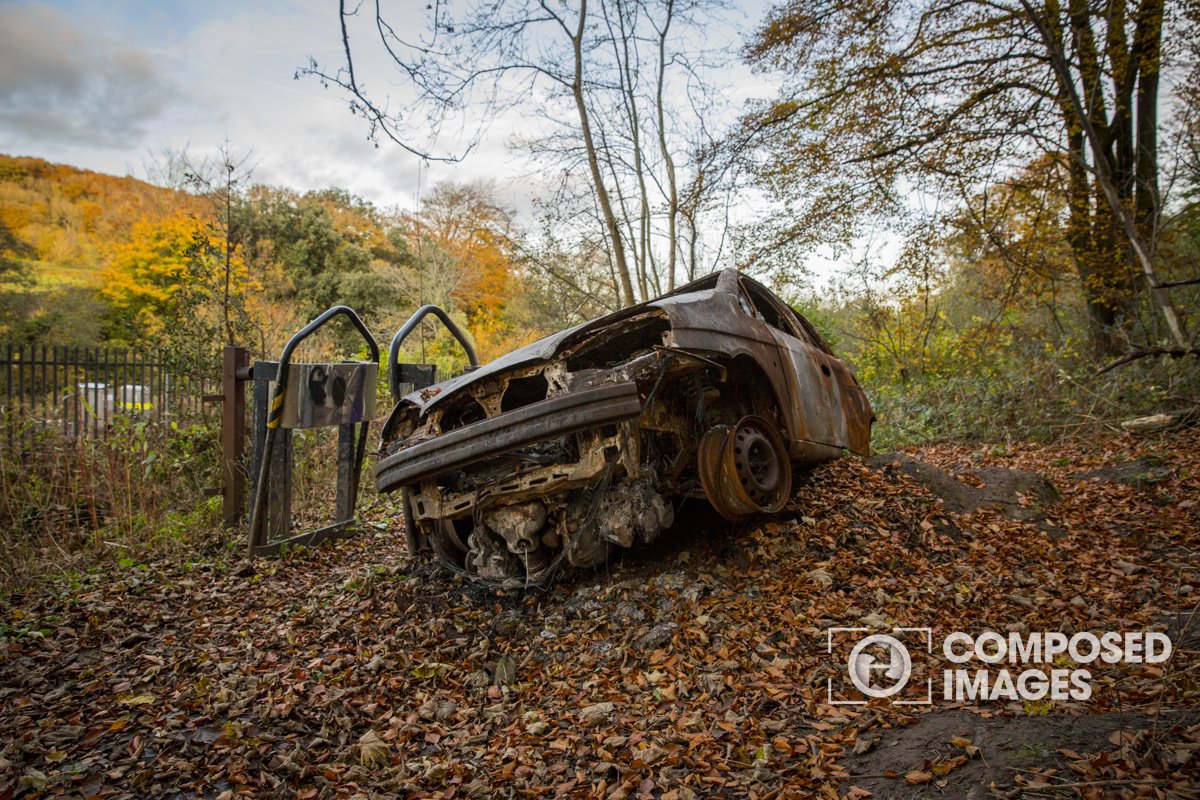 Abandoned vehicles in random places can hold tantalising mystery. They hint at the unknowable magical tragedy of apocalypse – and who knows, the way modern politics is currently going, perhaps a near future apocalypse. They violently jar and clash against whatever environment they’re found in. Anywhere except scrapyards.

Abandoned Vehicle In The Sea

I happened across the burnt out shell of a vehicle during a dawn stroll just off Rover Way in Cardiff at the top of this year. There was something cinematic about how the waves lapped while the breaking sun glowed off the metal shell. 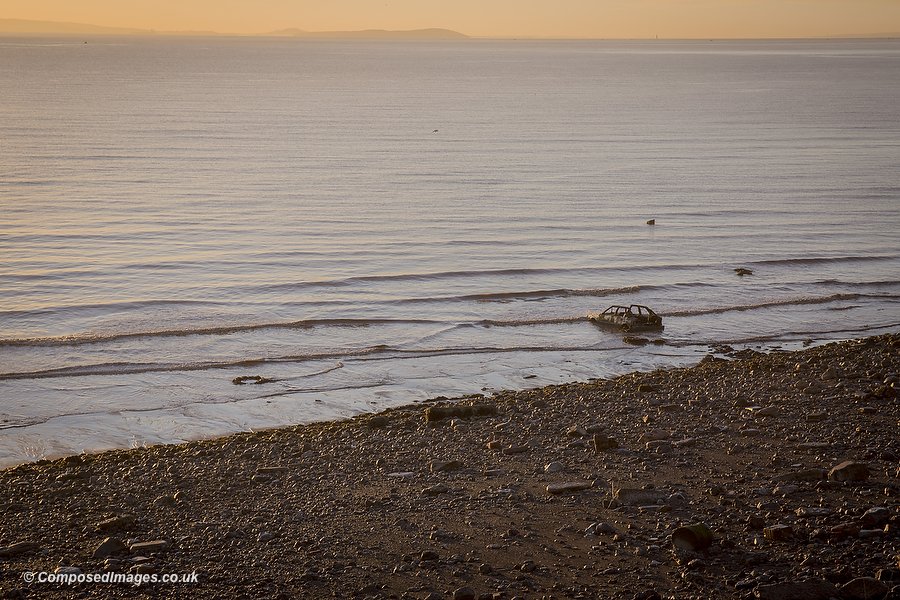 After moving to the St Fagans area of Cardiff a few months ago, we’re still exploring new pockets of our new surroundings with the young dog. My most recent find of abandoned vehicles came in the surprising surroundings of Plymouth Great Wood, which borders the St Fagans, Ely and Fairwater districts of Cardiff.  A series of different burnt out shells of cars and motorbikes can be found as you stroll around the woods, like an alternative sculpture trail of the kind you might find in more touristy woodland. 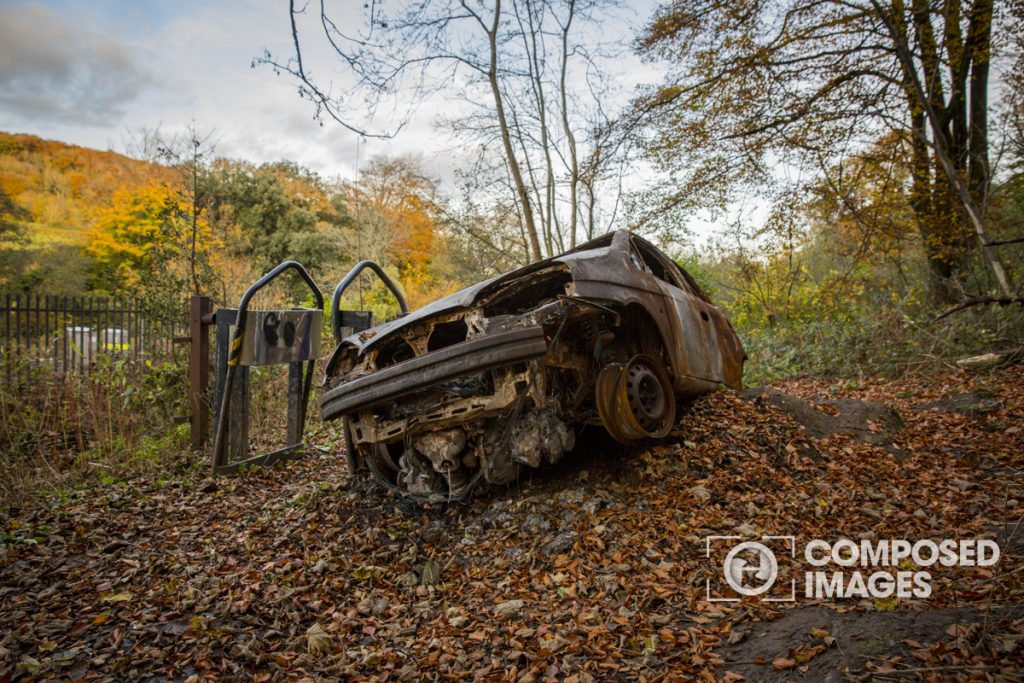 It’s reprehensible and irresponsible of course, ditching the carcasses of vehicles in such natural, relatively unspoilt wooded areas. It should be stopped and cleared up. The corrosive fluids, acids and materials can’t be good for the environment, or for any wild and tame animals sniffing around nearby. 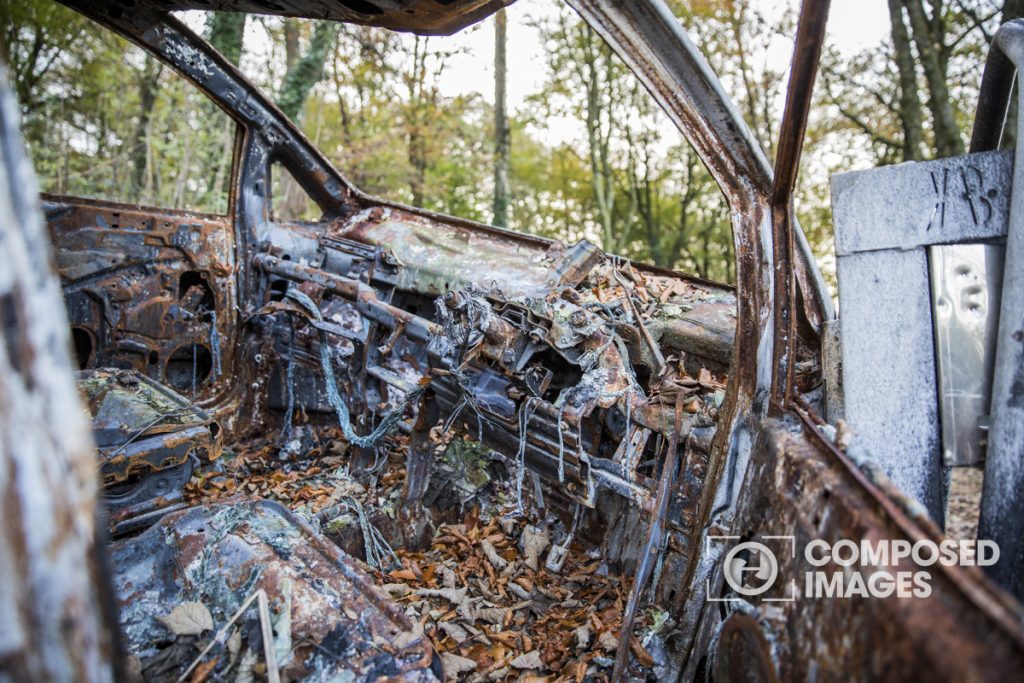 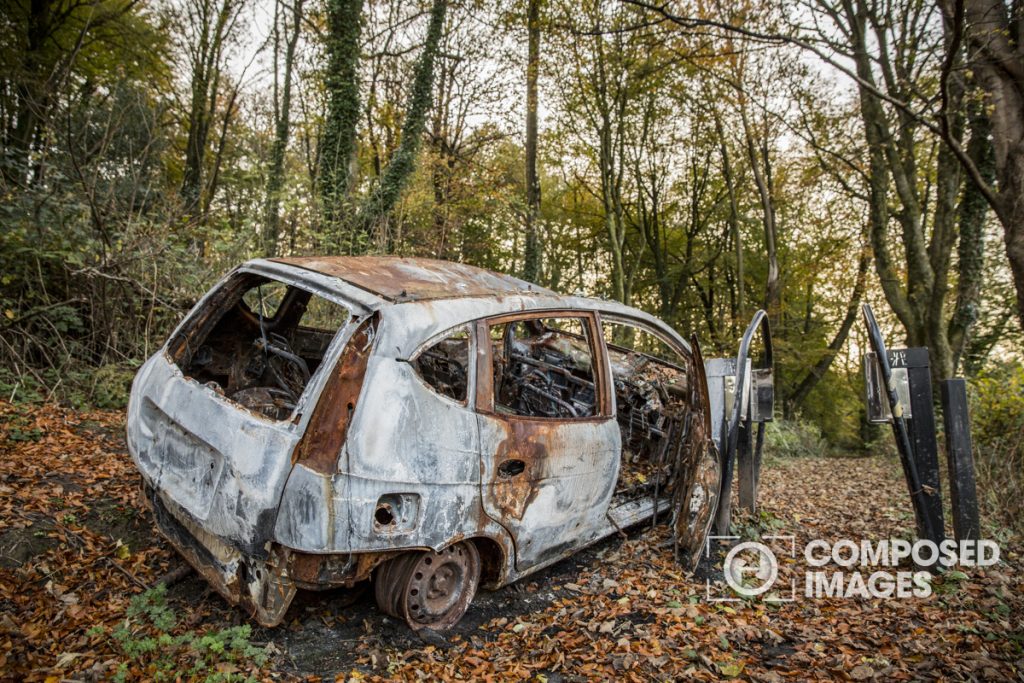 But it looks kind of cool. It presents a hypnotic clash of materials and colour and this creates something unintentionally artistic: nature living side by side with something unambiguously manmade, plants growing and curling around coiled springs and wires. Dead leaves shrivelling around spent metals and machinery. 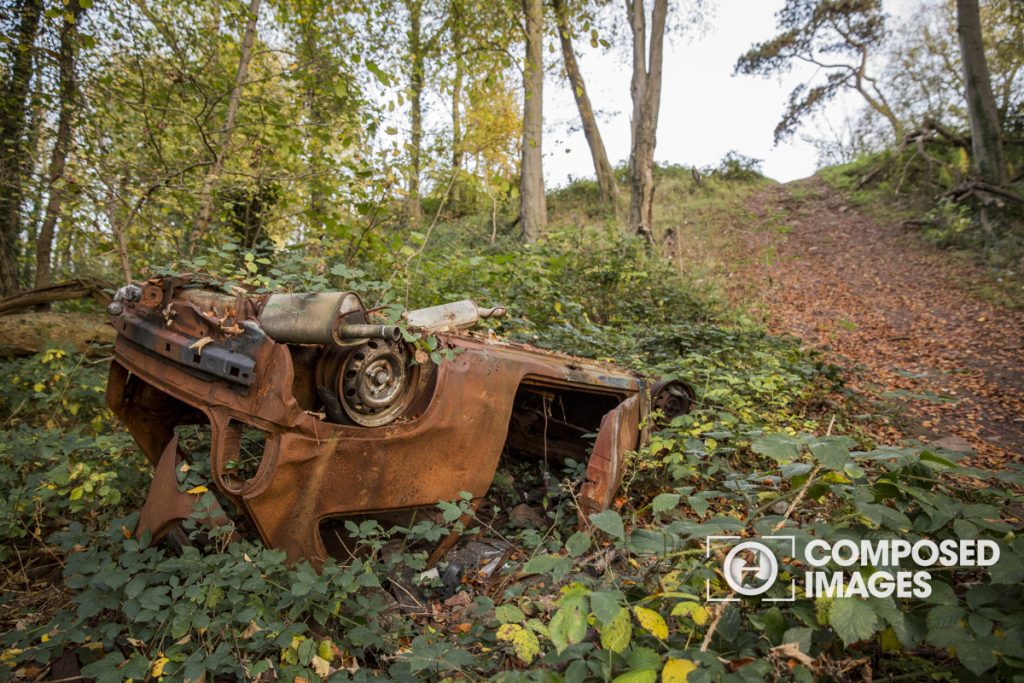 There’s an elemental clash of Man V Nature which is frequently represented in art, sci-fi books, films, perhaps most recently and notably in the blockbuster movie Avatar. It’s also commonly pondered whether humans will destroy the earth before nature destroys it. With the new US President Donald Trump in denial of climate change, it suddenly seems more likely.

At this time of year, with leaves settling on and around it, the colour clashes appear unnatural but not unpleasing. The cool blues that don’t seem to belong against the warm oranges and browns, but challenge the eye in the same way the very presence of the vehicles do. The twining of leaves and metals. It would make a great location for an editorial shoot of some kind, an actor or a band. 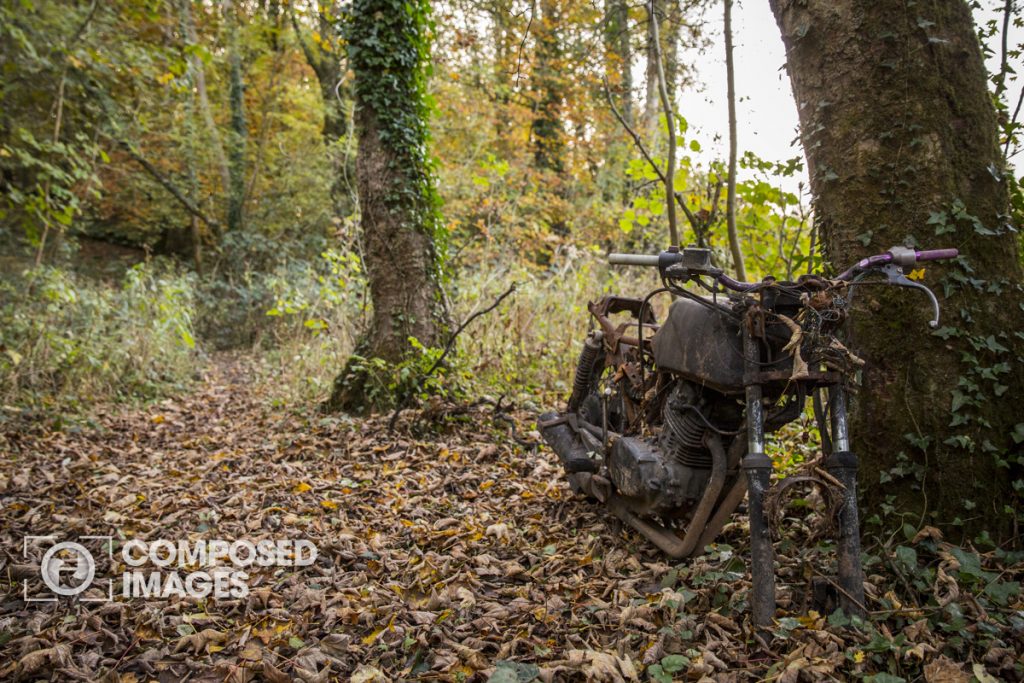 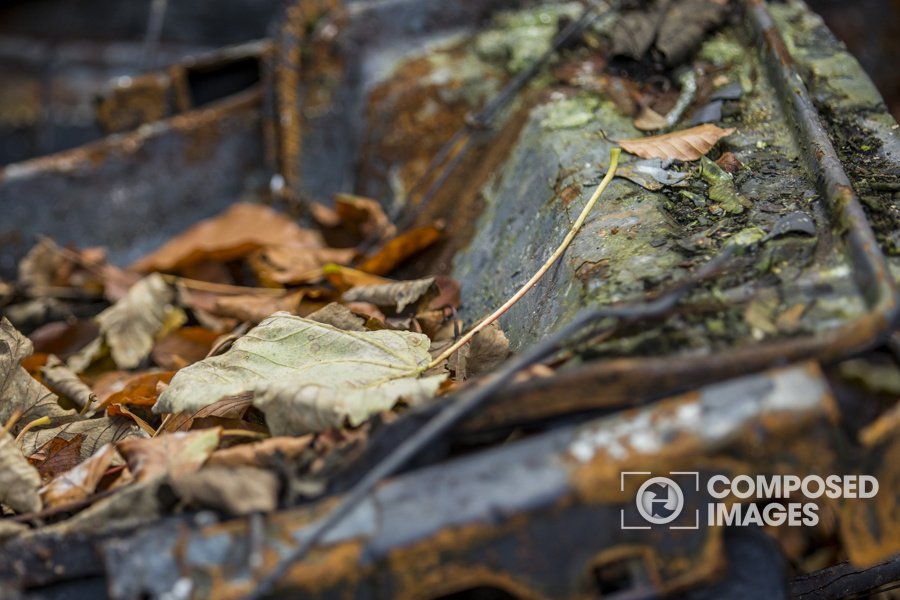 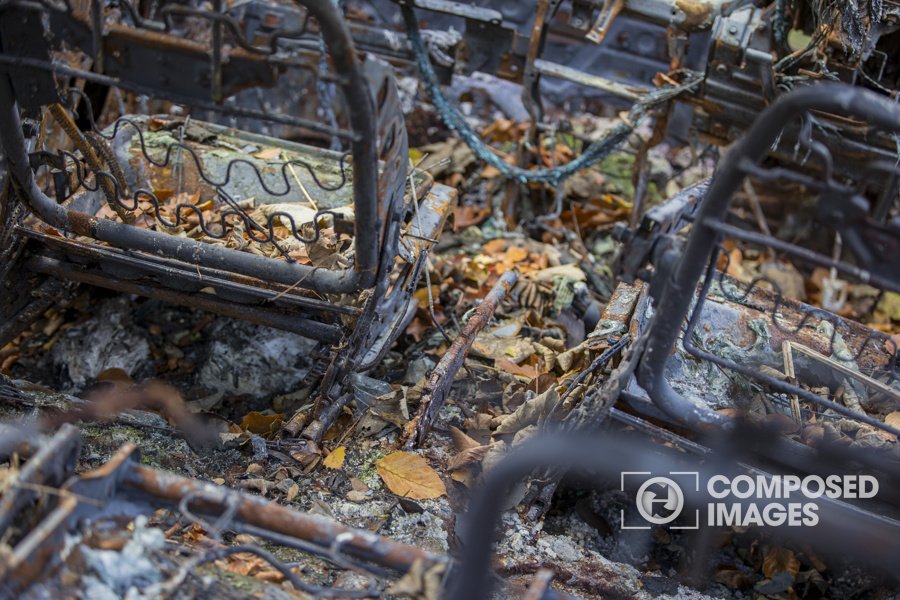 You wonder too about how the abandoned vehicles came to arrive and settle here. The people responsible. Did it represent the incredible, memorable climax to a night of rebellious carnage? What did the exhilarating thrill of pushing the burning shell down that hill feel like to those people, to that person?

When the apocalypse arrives, will vehicles in strange environments reflect the last desperate actions of humans?  Attempts to somehow escape and preserve themselves in the face of nuclear fallout evidenced only by rust, steel, handlebars, wheels, ash? 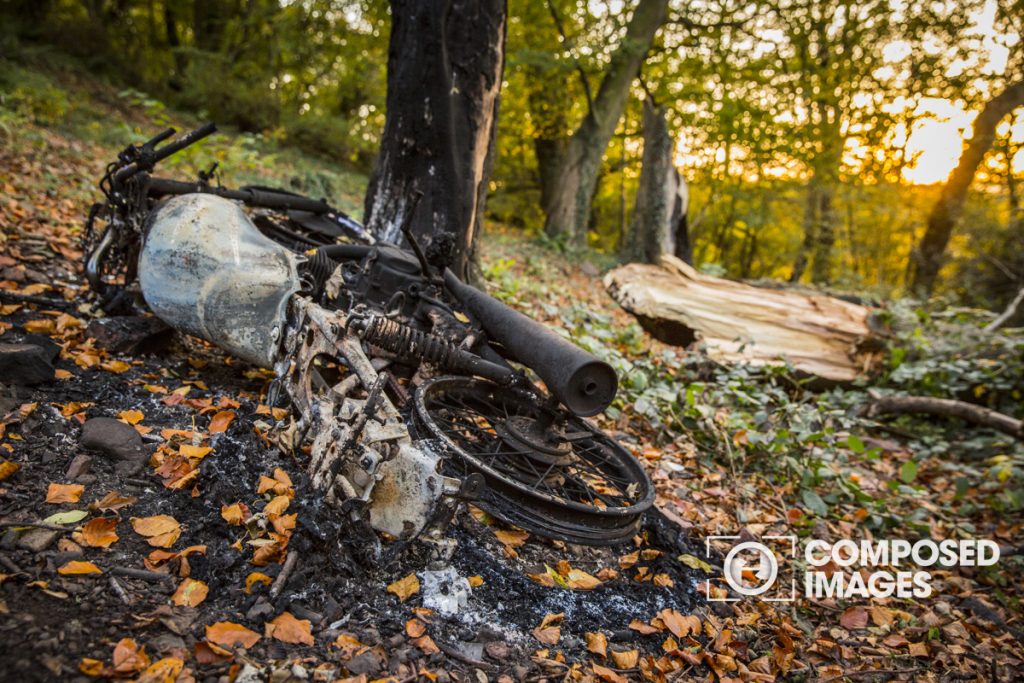 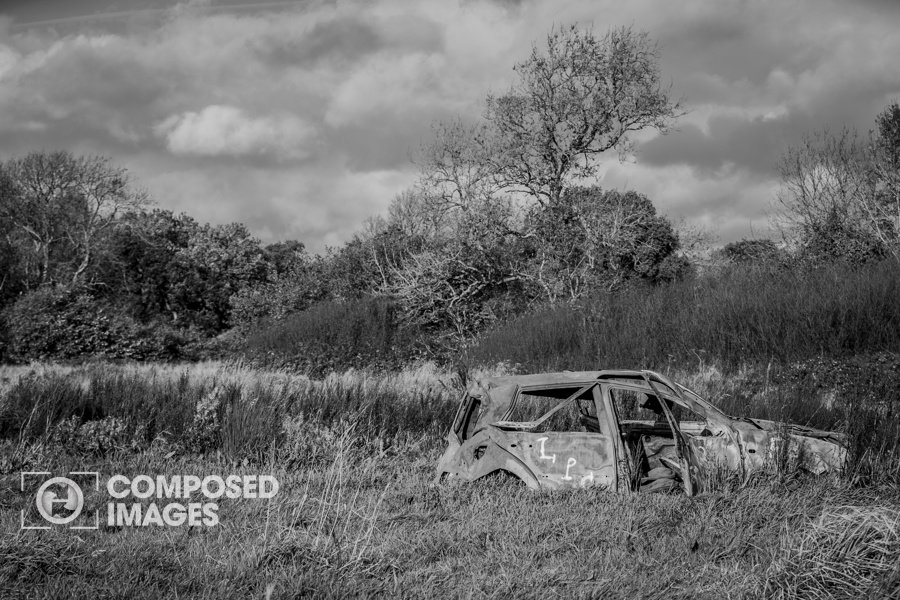