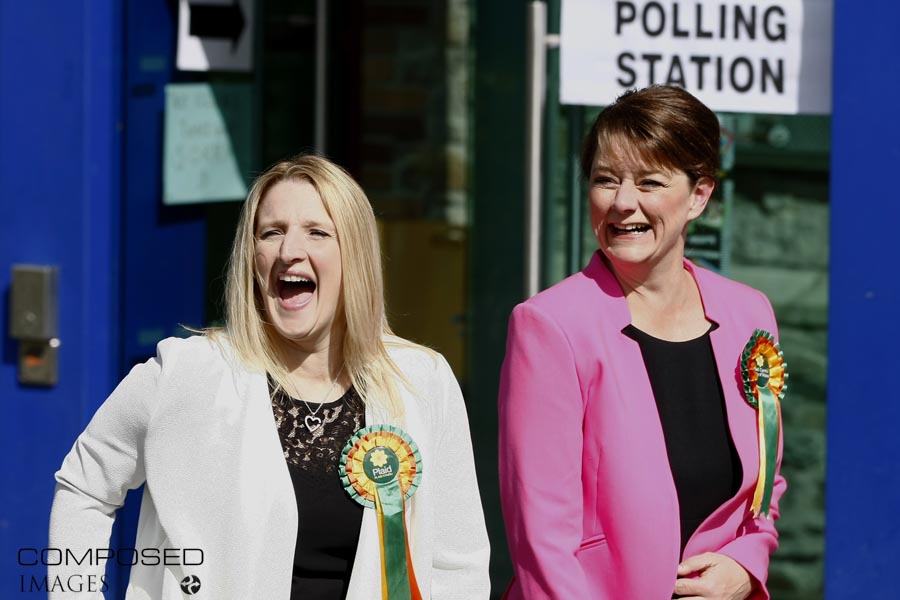 A blog from South Wales on General Election Day 2015.

Far too early in the morning, words of a radio newsreader blended into my brain and I surrendered into foggy consciousness. Just as a few months earlier when heading to the Brecon Beacons, I blearily fumbled around, putting sandwiches and flasks into plastic bags, before climbing into the car and making my way north through Cardiff.

My first stop was the town of Porth, not far from Pontypridd, in Rhondda Cynon Taff. Entirely new to me, I strolled around the industrial valleys’ town, taking in a nice suspension bridge and capturing the sun gently breaking over the hillside, lightly staining the clouds pink. Disappointingly, there was an absence of any polling station activity but perhaps it was still a little too early. 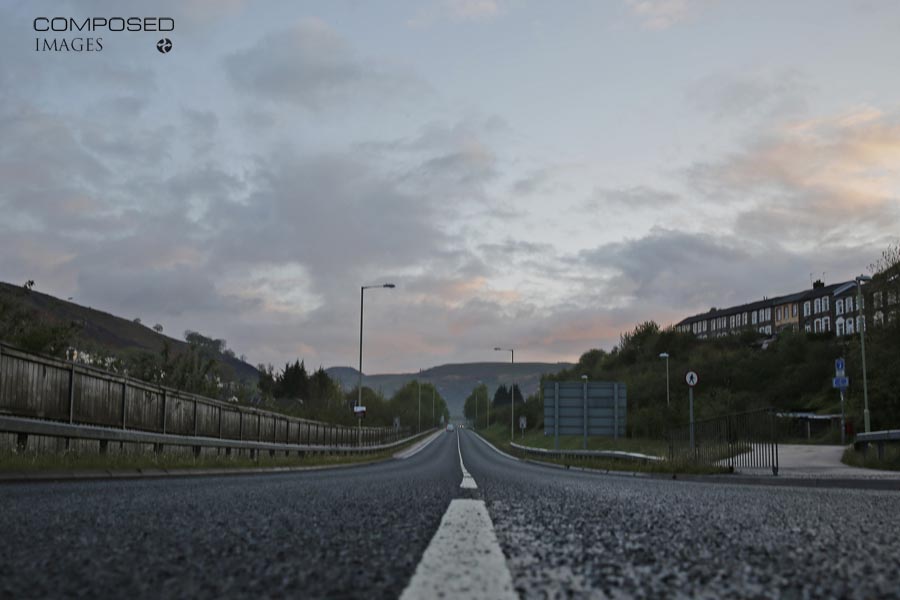 A general view of Porth, Rhondda Cynon Taf, on the morning of the 2015 general election. 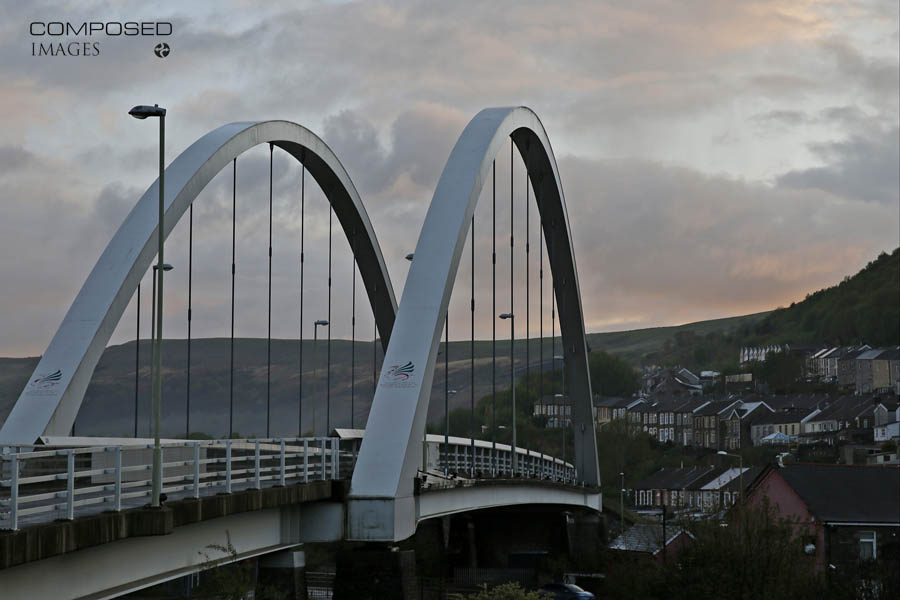 A general view of Porth, Rhondda Cynon Taf, on the morning of the 2015 general election.

Passing a narrow alley, I saw some discarded chairs. They had a charm about them, positioned as they were, framed by the alley with a discernible landscape background. And as the day was about gaining seats rather than discarding them, it felt somehow pertinent. 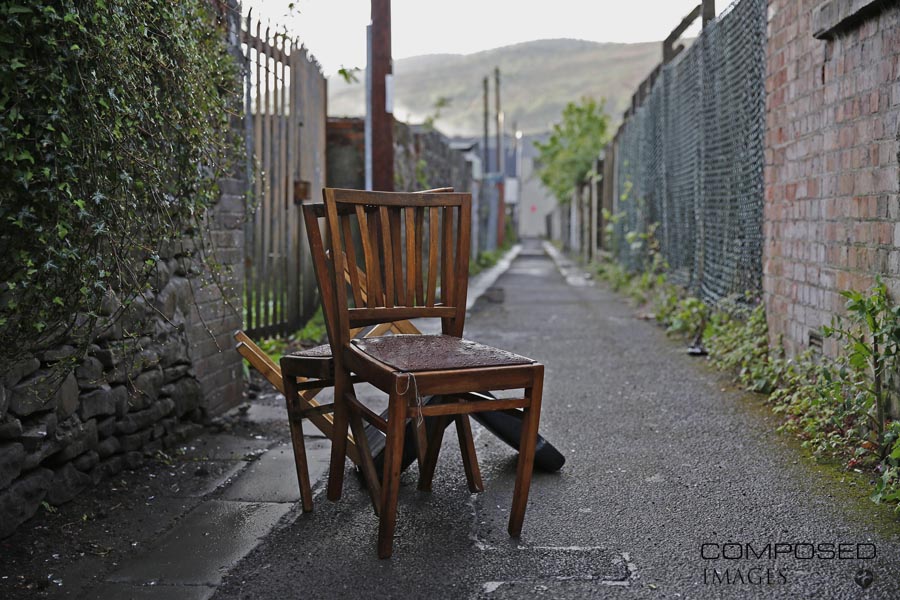 Unwanted chairs in Porth, Rhondda Cynon Taf, on the morning of the 2015 general election.

I’d earmarked the next town over from Porth, Ynyshir, because it had a promising sounding polling station, Bethany Baptist Church, which sounded pretty to me. It was understated, but its organisers were accommodating. 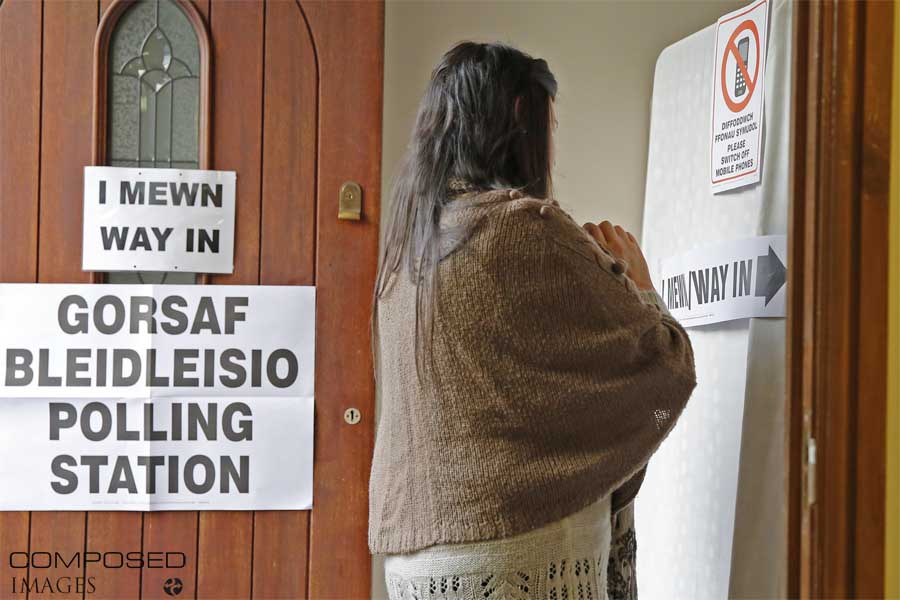 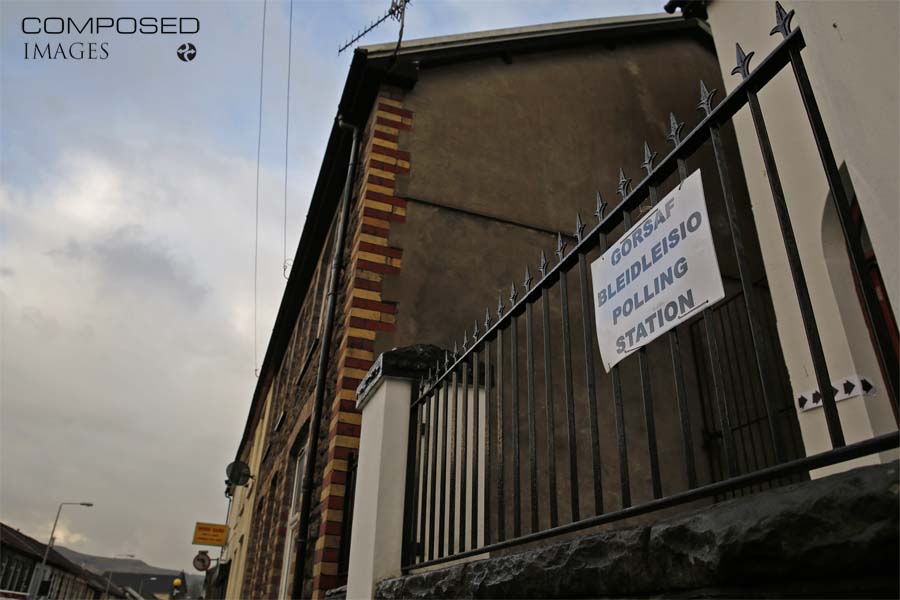 A polling station for the 2015 general election at Bethany English Baptist Church in Ynyshir near Porth, Rhondda Cynon Taf. 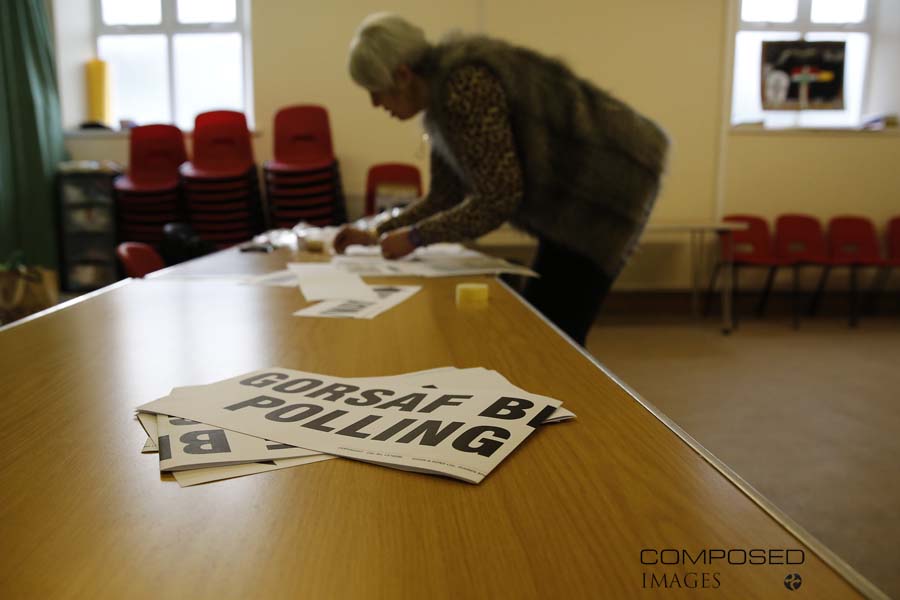 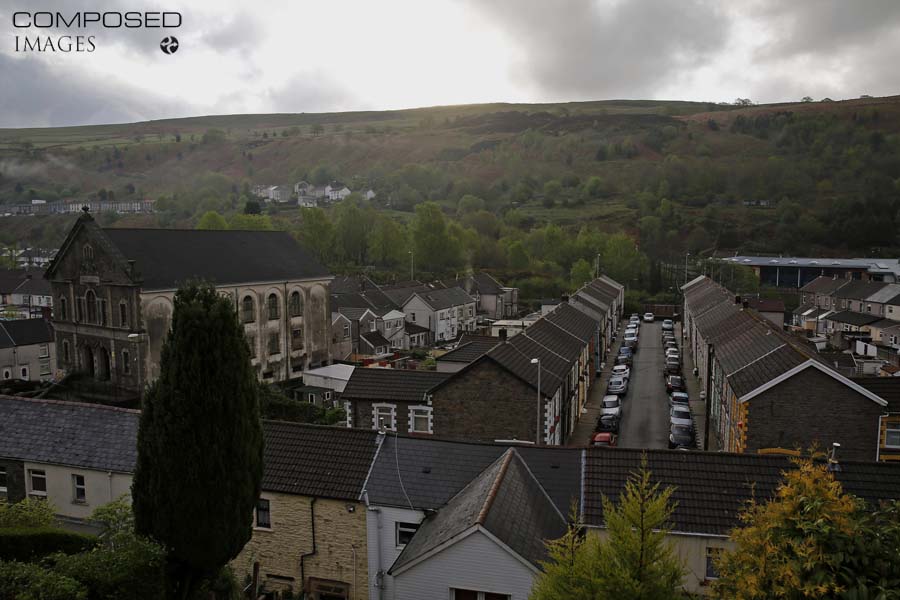 A general view of Ynyshir near Porth, Rhondda Cynon Taff, on the morning of the 2015 general election.

From there I headed to Penycraig, on the edge of Tonypandy. Once parked and the impressive Soar Centre polling station had been found, I headed for a walk further into Tonypandy itself, eventually finding another polling station in a church. 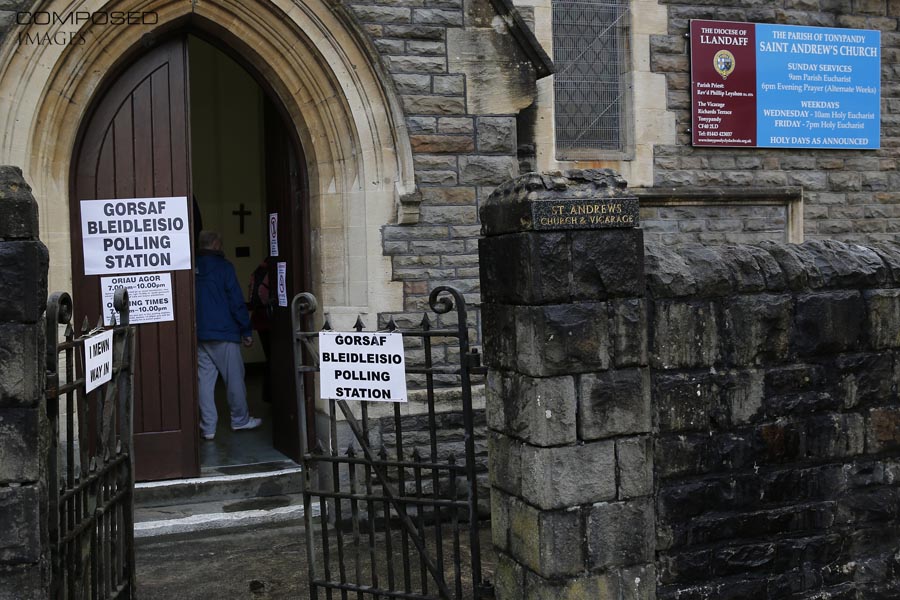 St Andrew’s Church polling station in Tonypandy, Rhondda, on the morning of the 2015 general election. 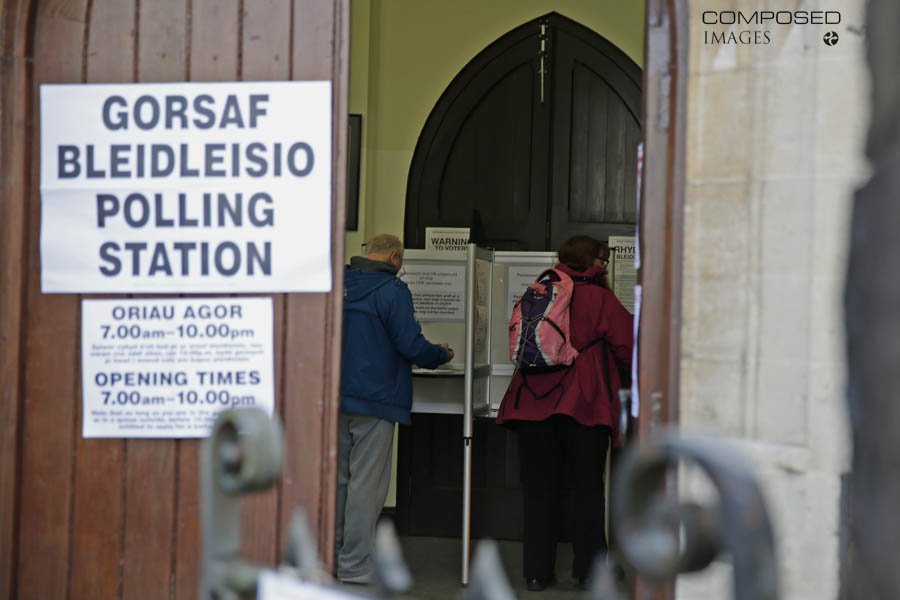 Voters inside St Andrew’s Church polling station in Tonypandy, Rhondda Cynon Taf, on the morning of the 2015 UK General Election.

Having paced back to Penycraig, I saw that a small handful of other lens people had assembled in the yard outside. We waited for Leanne Wood, leader of Plaid Cymru, who had been impressive in building her profile throughout the campaign, appearing in a number of live television debates with other party leaders. Over the last few months she he had become a new icon for politics in Wales, arguably surpassing the First Minister. 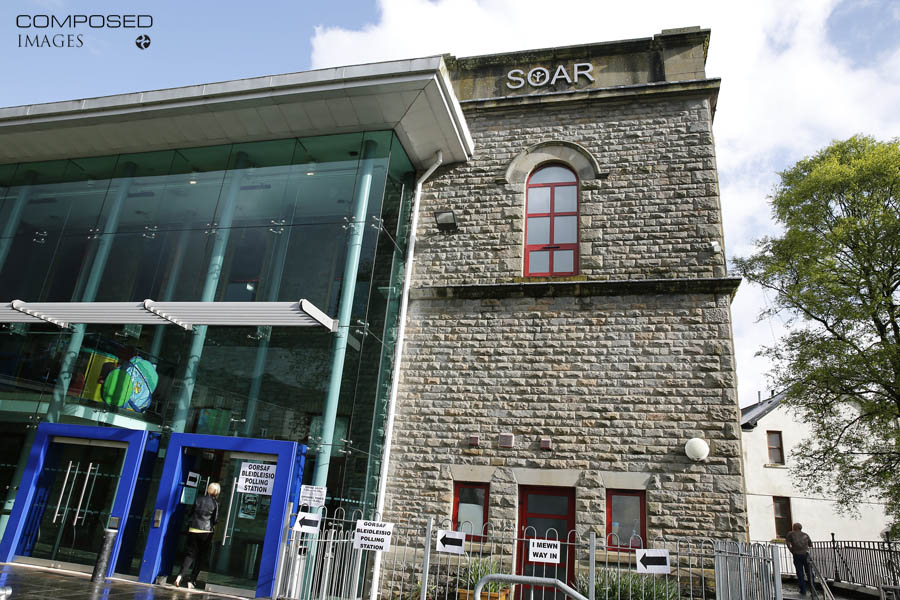 The Soar Centre polling station in Penygraig, Rhondda, on the morning of the 2015 general election. 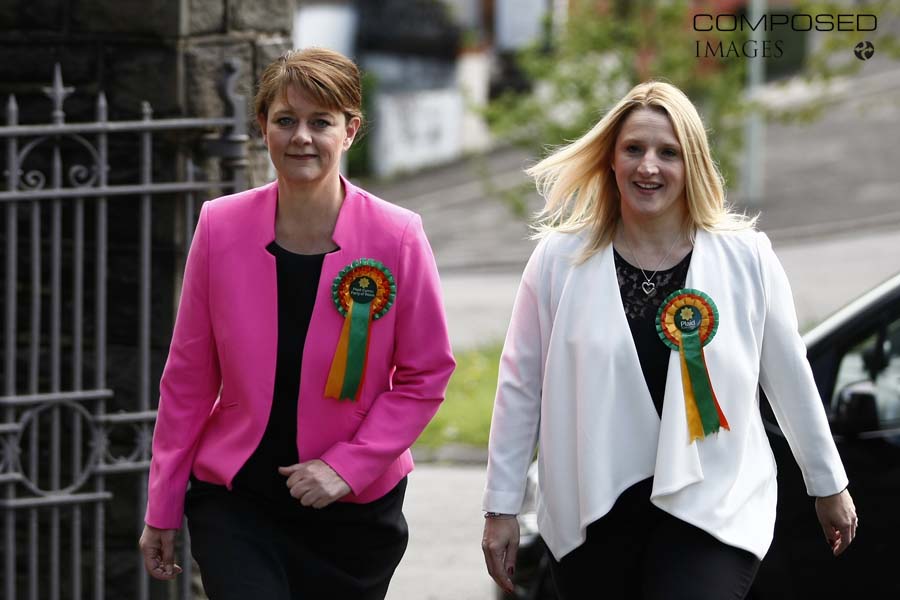 After making their votes, they emerged and happily posed for photographs. 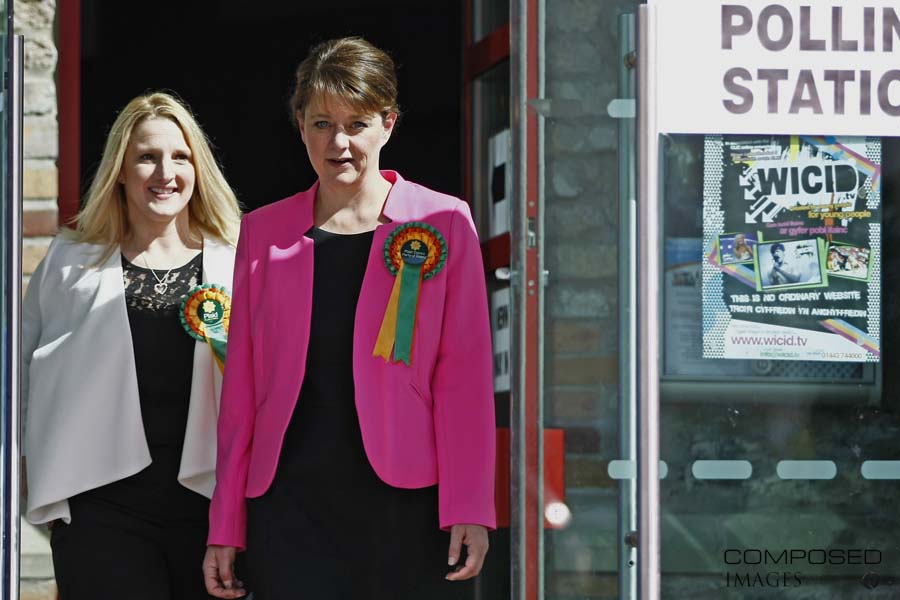 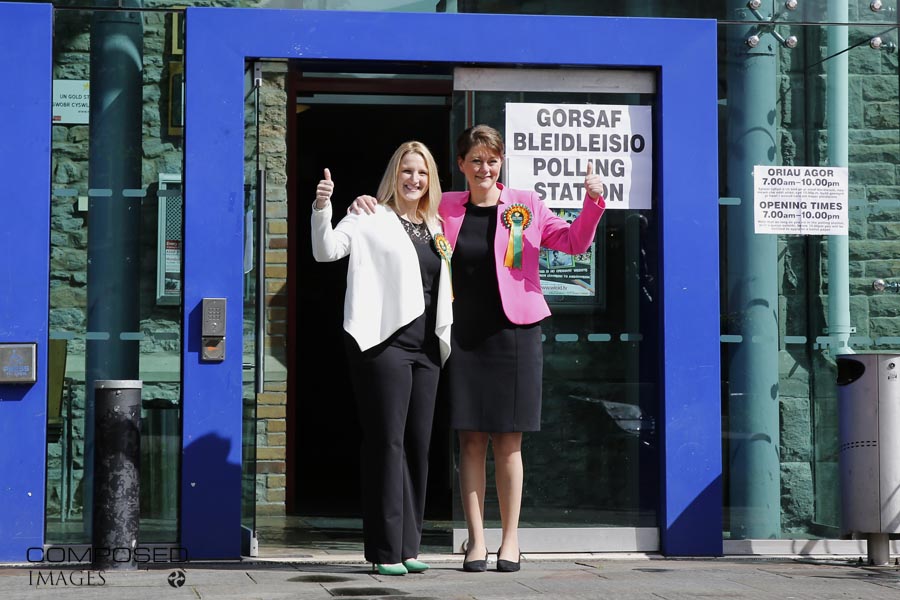 Leader of Plaid Cymru, Leanne Wood (right) and Plaid Cymru candidate Shelley Rees-Owen pose for photographs outside the Soar Centre in Penygraig, Rhondda, after voting in the 2015 general election.

Leader of Plaid Cymru, Leanne Wood (right) and Plaid Cymru candidate Shelley Rees-Owen enjoy a joke outside the Soar Centre in Penygraig, Rhondda, after voting in the 2015 general election.

I drove back towards Cardiff, taking a convoluted route through small towns, villages, and pockets of the Vale of Glamorgan. Across the day, Conservative placards in fields were never more prominent than here. Pendoylan War Memorial Church was probably the cutest polling station I found. 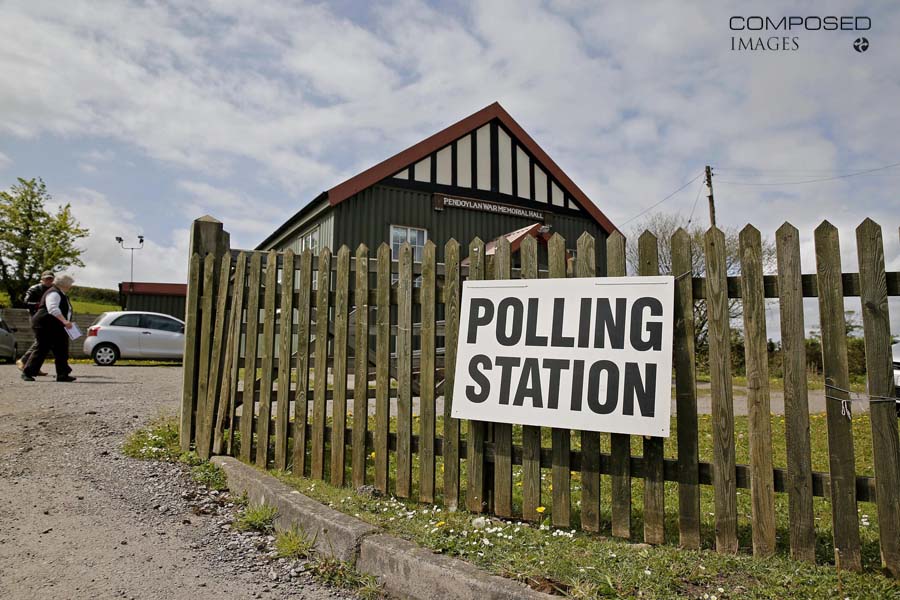 Pendoylan War Memorial Hall polling station in the Vale of Glamorgan, on the afternoon of the 2015 general election. 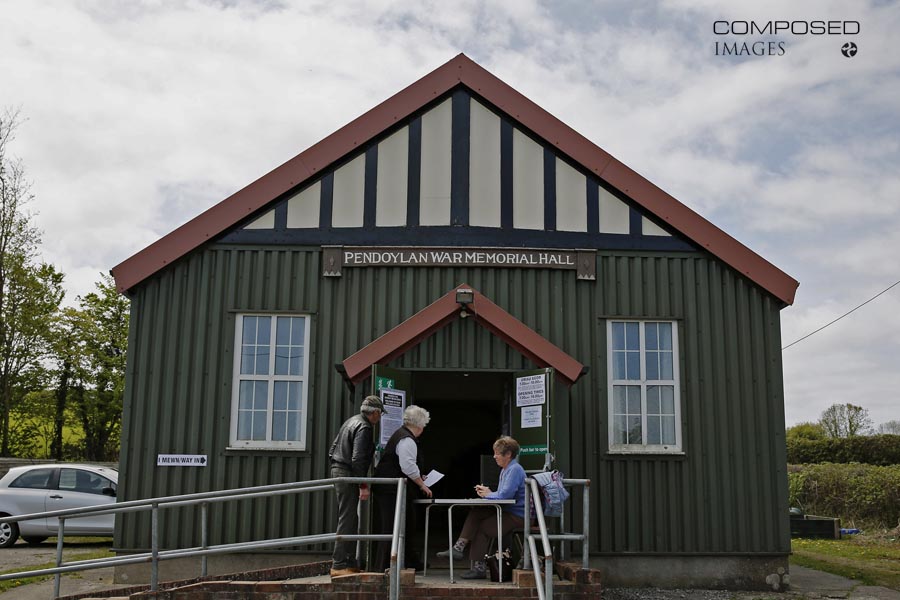 Pendoylan War Memorial Hall polling station in the Vale of Glamorgan, on the afternoon of the 2015 general election.

General elections don’t usually come around that often. They are momentous and gently historic events – depending on where you are – when small community venues are transformed into places of different significance. Last week a laundrette in Oxford featured in the many picture compilations by various media outlets, as well as a boxing club. In the latter, an image brilliantly juxtaposed a boxer in training with an elderly lady, aided by a walking stick, slowly making her way to a ballot box.

People are subtly changed too. There’s an added sense of purpose about them as they march to polling stations, politics in mind, polling cards in hand, perhaps an undercurrent of nervousness and secrecy.

In the days that followed, it struck me how brutally fierce the general election was. Competition is a tough thing to which few people are immune over a lifetime. Rejection and defeat always hurts. It’s similar in any game, in any sport or individual contest, in any career.

But there’s probably none so public, none so personal, and none so career-defining as a general election. Especially this general election, which stunned so many with a unanimous outcome at odds with forecasts, its infliction of considerable trauma on an established political landscape.

Heart and soul goes into political campaigns, mostly from names you’ll never know, as well as those which are highly exposed, even afforded some celebrity. This is partly due to bloodthirsty media and people with cameras wanting to record every slurp, bacon sandwich bite, slip-of-the-tongue.

People get emotional. There’s an undeniably powerful strength of feeling and belief in issues: issues which are not trivial, and matters that affect us all. Unlike one of my frequent photographic subjects, it is not 22 youngish men kicking a spherical object around a rectangle of grass with various degrees of sportsmanship, which is easy to dismiss if you’re just not into it. Although politics in specific areas of Wales and across the UK can be compared with football fan culture: basic tribalism, reds against blues.

This time around, two parties were obliterated by a public vote. Other marginal sides did ok but it mattered little in terms of winning seats. Debate about the fairness of the voting system started once again.

‘Dejection’ is a highly over-used word in captioning football photographs of defeated players, staff or fans. But there were few words as appropriate in the following days. There was utter dejection and despair, anger, an almost total loss of hope. It spawned unrest, division, protests across the UK.

On the flipside was pure delight, joy, justification, liberation from a coalition, full autonomy, a sense of unified power and robust entitlement.

In football there is always another game to play. A few weeks after scoring the winner in the World Cup Final, reaching a career high it’s impossible to surpass, you will almost certainly be back to playing another game against another team. Part of the job is having to refocus and quickly move on.

This is where the comparison with sport breaks down.

An event like this general election will decisively shape a number of careers – big names and not so big names. For people like Ed Miliband and Nick Clegg, their reputations and working lives are abruptly impacted by the result and can never be the same again. On a basic human level, when a defeat is so resounding and so public, it must take immense strength to recover, to get back up and go again.

There being no big, UK-wide newsworthy ‘names’ local to me, I decided against trying my luck at count venues and shooting the results being announced. Selling images to media outlets within Wales is challenging at the best of times, and my best chance of sales are with outlets over the Severn Bridge. That’s if I happen to get half decent images. It was unlikely anyone outside Wales would be interested if the candidates weren’t obvious ‘names’. Although you can always shoot in the hope that the relative unknowns will one day become ‘names’. 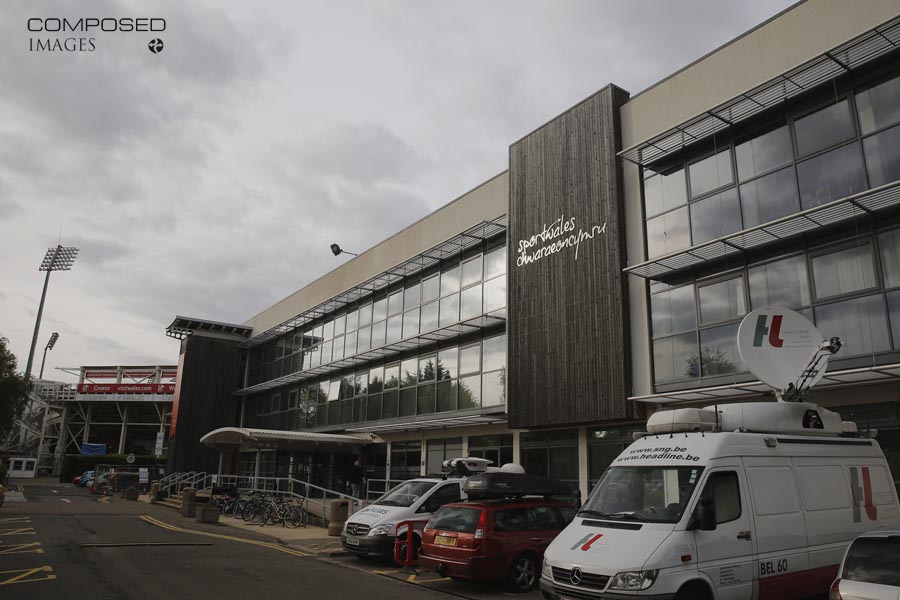 The Sport Wales building at Sophia Gardens in Cardiff, where 2015 general election votes were counted and the winning Cardiff candidates announced.

In early evening of election day I grabbed a shot of Sophia Gardens in Cardiff, where the counting would take place and the winners announced in several hours’ time. From there I walked back through Bute Park and the city centre, passing Cardiff Central library polling station. 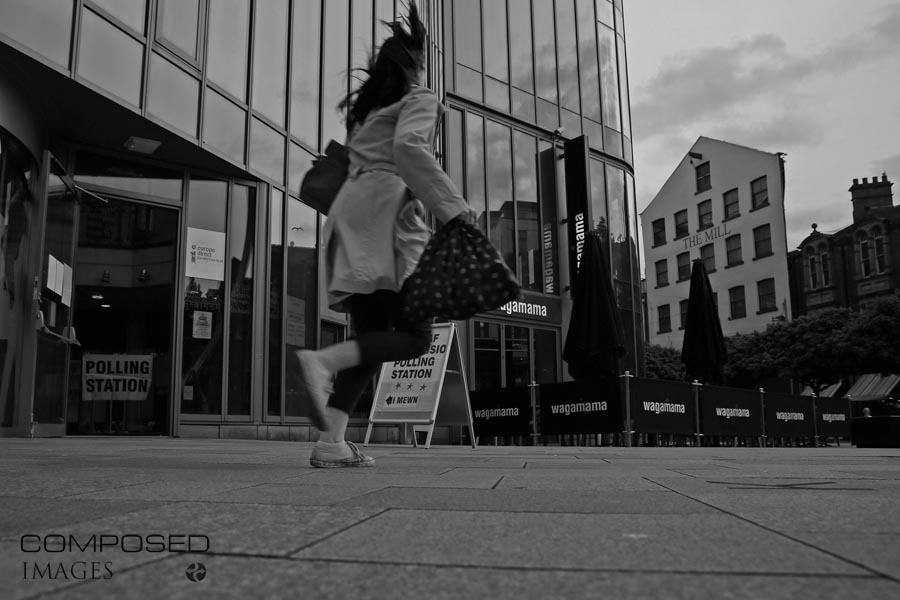 A woman runs past Cardiff Central library polling station in Cardiff city centre on the evening of the 2015 general election. 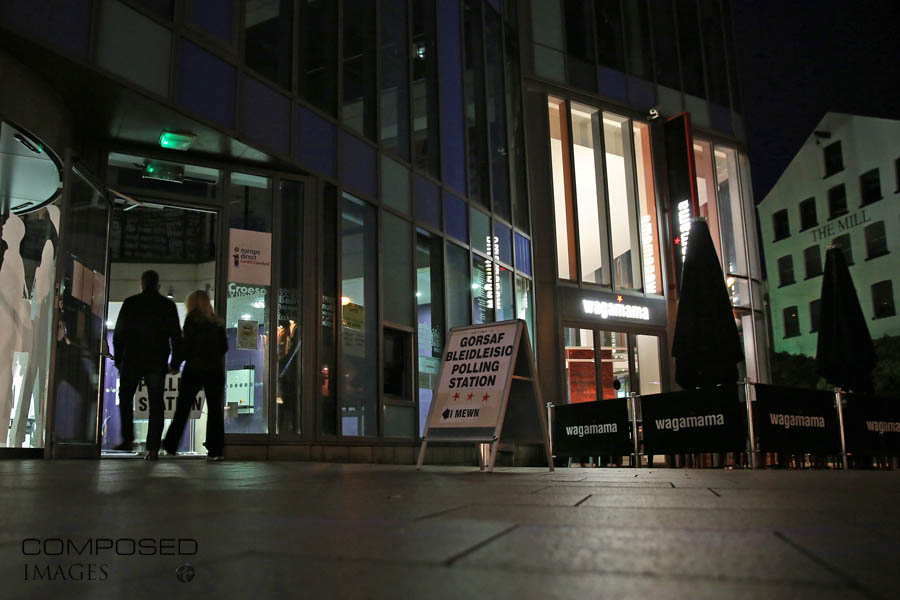 Two of the day’s final voters enter Cardiff Central library polling station in Cardiff city centre as the 10pm deadline approaches on the evening of the 2015 UK general election.

To complete the day and book-end the day’s series of images, I wanted to grab a shot of a polling station sign being taken down or pulled away. So I decided to dash back to the library for 10pm, lingering awkwardly around the door for five minutes ahead of the deadline – which was promptly respected. 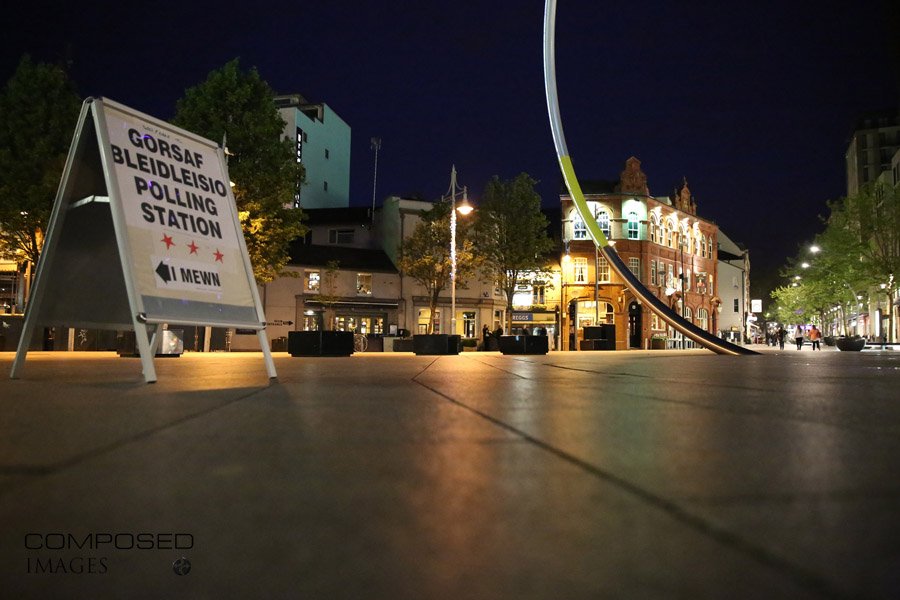 Outside Cardiff Central library polling station in Cardiff city centre as the 10pm deadline approaches on the evening of the 2015 general election. 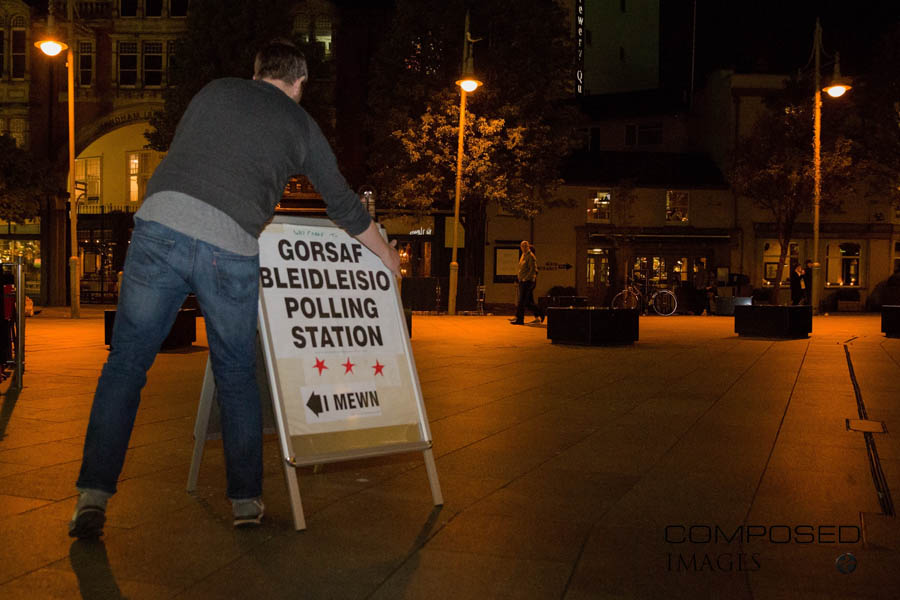 An image of mine in the Guardian Live Newsfeed.

[…] The UK general election was covered from South Wales in May. I managed to get around a number of the region’s Polling Stations, and saw Plaid Cymru leader Leanne Wood cast her vote at Penygraig in the Rhondda. More in a dedicated general election blog post here. […]